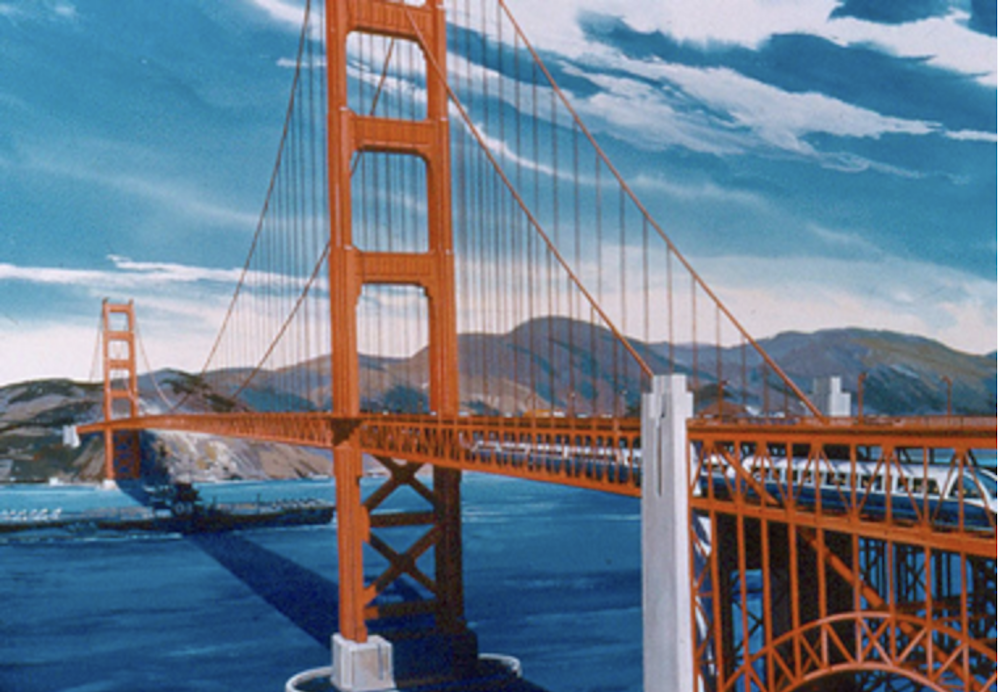 If California is as serious about public transit as its urban leaders claim, why isn’t there a commuter rail service running over the Golden Gate Bridge?

There’s no good reason why our state’s iconic span must devote all six of its lanes to cars. For more than 50 years, engineering studies have shown that the bridge could accommodate trains.

And now would be the perfect time to establish a rail line across the Golden Gate. On the level of symbol, train service would send a powerful message to the whole state and to the world that California offers more than just car culture. And, practically, the dense and traffic-plagued Bay Area would benefit immensely from a rail connection between San Francisco and the North Bay counties of Marin and Sonoma.

As our major regions plot new transit investments, there is no more glaring hole in California public transportation than the one across the Golden Gate Bridge.

North of the bridge, Sonoma and Marin are about to open the first phase, from Santa Rosa to San Rafael, of their new SMART light rail service (Sonoma-Marin Area Rail Transit). SMART, which also includes a bicycle-pedestrian pathway, will eventually serve a 70-mile corridor from Cloverdale to Larkspur, just 10 miles up the 101 Freeway from the Golden Gate.

South of the bridge, San Francisco is spending billions to construct the Transbay Transit Center, which has been billed as the Grand Central Station of the West. It is supposed to be the northern terminus of high-speed rail someday, and it should accommodate Caltrain, the commuter rail service that extends down the peninsula and all the way to Gilroy, the garlic capital at the bottom of Santa Clara County. 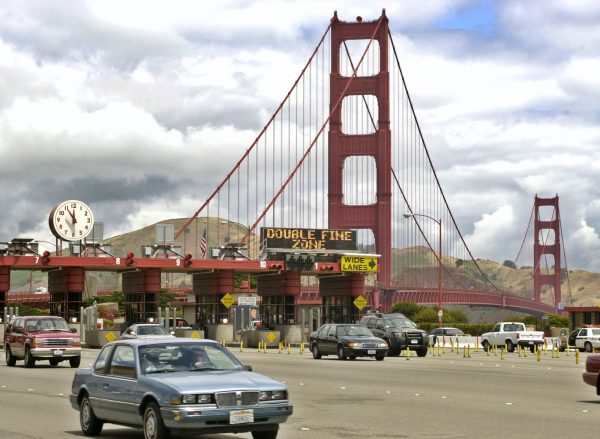 Toll booths at the Golden Gate Bridge in San Francisco, May 2002. Photo by Paul Sakuma/Associated Press.

But there is no plan for a train—be it via expanded BART service or a cross-bridge extension of SMART or some new service—to connect the new SMART train with the new giant train station. Which is sort of shocking for a place full of do-gooders who love to lecture the rest of us on the need to live sustainably and go boldly into the future.

So a question for the Bay Area: What in the name of progressive enlightenment are you waiting for?

The idea of a train on the Golden Gate Bridge is not a new one. To the contrary, such train service was envisioned as part of the original plan for the BART system. Michael C. Healy, in his excellent new book BART: The Dramatic History of the Bay Area Rapid Transit System, recalls that Marin County leaders in the early 1960s badly wanted to be part of BART. They were seeking to restore train service lost with the dismantling of the railroad that once took riders from Sausalito to Eureka, with a famous stop in Santa Rosa (the train plays a role in Alfred Hitchcock’s early classic, Shadow of a Doubt).

But in the fall of 1961, the governing authority of the Golden Gate Bridge balked at allowing trains, claiming that they would put too much stress on support cables. BART’s own engineering studies found that the bridge was plenty strong enough, but the bridge authority, out of what critics have maintained was fear of losing toll dollars, wouldn’t budge and produced its own competing studies. In the end, BART dropped Marin from its plans, to the frustration of several county officials. It would take more than half a century to bring rail transit to the county—in the form of the new SMART.

The idea of a Golden Gate train didn’t die. In 1990, renewed talk of BART to Marin led to a study that found the bridge could handle trains. But during the big California recession at that time, the multibillion-dollar cost of taking BART to the North Bay ended the conversation.

In this history, there’s a lesson even more dramatic than the Golden Gate: There are huge costs when California skimps on infrastructure, and fails to build the big and essential connections between our communities. A bridge train to the North Bay would have been easier and cheaper in the 1970s than now, and so for 40 years North Bay commuters have paid a rapidly rising price—in traffic, bridge tolls, time, and the extortionate cost of parking in San Francisco.

Just how much cheaper and easier would high-speed rail have been to build 30 years ago, when the idea was first suggested for California? There is real wisdom in the phrase that Healy attributes to Bill Stokes, the founding father of BART: “Build it now. It will never be cheaper.”

In this history, there’s a lesson even more dramatic than the Golden Gate: There are huge costs when California skimps on infrastructure, and fails to build the big and essential connections between our communities.

That’s why a train link over the Golden Gate Bridge would make sense today. Yes, such a plan would be attacked—this is the Bay Area and this is California, after all. Preservationists and aesthetes would say an iconic American landmark is being sullied by any change, as if adding rail to a roadway were the same as painting a moustache on the Mona Lisa.

Marin’s anti-growth zealots would oppose it, arguing that the train would encourage new development in their idylls. Engineers would wonder about the cost and difficulty of tunneling through the Marin Headlands to get to the bridge. And pointy-headed accounting types would cite the cost and point out that most commuters in the North Bay are going to jobs that are in the North Bay, along the very busy 101 Freeway corridor, and that with the rise of telecommuting, the number of commuters may shrink in the future.

And those who follow BART closely will argue that that system is at a difficult crossroads, and needs to focus on maintenance and other pressing projects, like a second tube under the Bay between Oakland and San Francisco.

To all such objections there is one answer: Why is the Bay Area thinking so narrowly and with so little vision for the future? As an Angeleno, I can’t resist pointing out to Bay Area friends that in the realm of public transit, we in Southern California are surpassing you, having passed sales tax increases to fund a transformational 50-year plan for a regional system that makes yours look like a disjointed joke. Are you really going to just sit there and let yourself be embarrassed for the next century by L.A.?

If done well, imagine how powerful a Golden Gate Bridge-traversing train would be. It could stop at Union Square, connecting with BART, on its way to the new Transbay Transit Center. It would draw commuters. It would draw tourists. It would draw rail fans. And it would make the planet’s greatest bridge even greater.

Such a train could be the inspirational showpiece of what the Bay Area badly needs: a new regional plan for transit that connects all nine of its counties. And when you pair the utility of such a train with its status as a powerful symbol of California’s commitment to a connected and sustainable future, you know what, Bay Area? You’ve come to this bridge. It’s time to cross it.