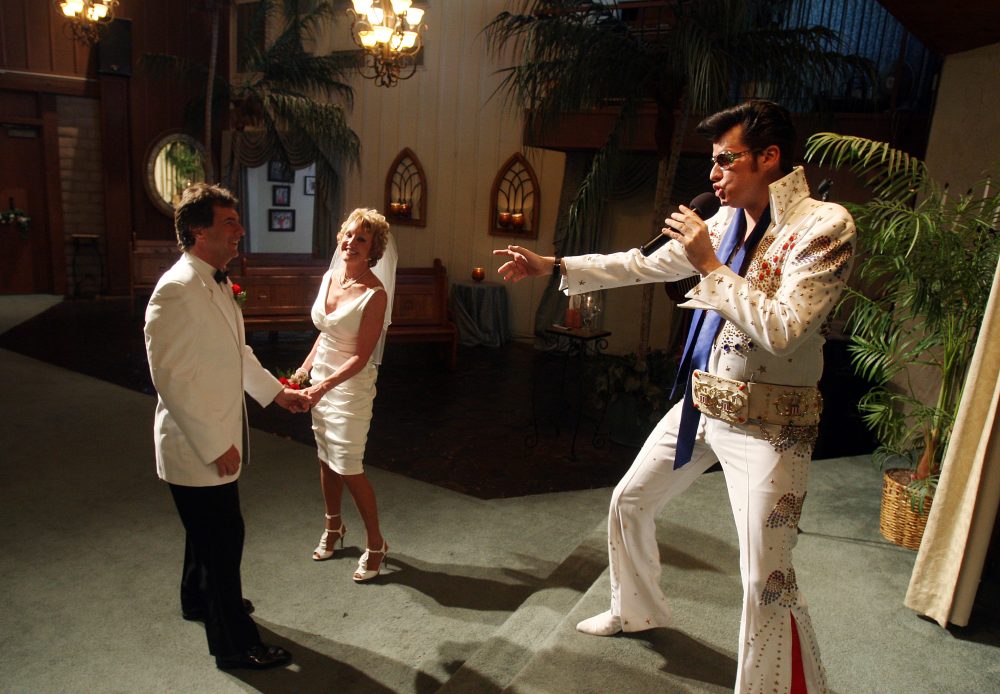 My proposal may seem sudden, but ours shouldn’t be one of those late-night quickie weddings at a chapel off the Strip.

I, California, want a real grown-up marriage with you, Nevada. We both have reputations for being fun and youthful and wild, but who are we kidding? We’re both mature states that entered the Union in the mid-19th century.

And look how much we have in common. I’m the Golden State and you’re the Silver State. You’re also the girl next door. Heck, more than 90 percent of your people live within an hour of my eastern border. And, one in five Nevadans was born in California. That may not seem like a lot, until you realize that only one in four Nevadans was born in Nevada.

It’s not just that we’re alike—it’s that together, we’re different from other American places. The United States is an increasingly mean, bitter, and judgmental country; most of the other 48 states are getting old and boring, and it feels like they want to close the windows and shut down the world.

But you and I love to entertain, not to judge. We can’t get enough foreigners and tourists, and we don’t care where they’re from, as long as their money is green. Plus we’re both tolerant of deviancy and sin (though I confess I’m uptight about greenhouse gases).

All of which is why we’d both be better off as one merged state, not two neighbors.

Right now, rich people and companies can play us against each other, and we both end up poorer. Recently, you—apparently feeling needy and desperate—gave $750 million in taxpayer money to the owner of pro football’s Oakland Raiders so that he can build a stadium in Las Vegas. Building a football stadium is a terrible investment, and the money will come from a hotel tax that currently funds transportation and your very poor schools. The Stanford economist Roger Noll called it the “worst deal for a city” he’d ever seen. Before that, you gave billions in tax breaks and infrastructure to another California company, Tesla, so they would put a battery factory there. Tesla said your offer was more than twice what the company’s founder Elon Musk had been seeking.

Deals like these leave both of us worse off—we lose a business, and you gain huge liabilities you can’t afford. It’s somewhat similar to the longtime problem of rich Californians establishing nominal residences in places like Incline Village, on your side of Lake Tahoe, because you don’t have income taxes. You don’t end up getting a cut of their income, and we lose money we need to educate and medicate our people.

Eliminating such destructive economic competition is just the beginning of what we could do for each other.

Prospective spouses are not supposed to want to change each other, but I hope you’ll have a good influence on me. You could inspire me to exercise the old pro-business libertarian ethos that helped me thrive, but has sagged in recent decades.

Look at you. Your economy has lagged the country because it’s far too reliant on tourism and real estate. But my extraordinarily diverse economy, which has been outperforming the rest of the country, could help support yours. You desperately need a better-educated populace; if you married me, your kids could more easily go to my terrific public university systems. Your workers would benefit from our wage-boosting laws, Nevadans choking on pollution would be healthier under our environmental regime, and, if we were married, we could stop fighting over water (and could help you screw the Arizonans and Mexicans instead).

In return for all of this, you’d bring me more of the young people and families that you’ve been better at attracting and keeping than me. Perhaps, once we’re official, you can share the secret of how to build enough housing that they can actually afford.

Prospective spouses are not supposed to want to change each other, but I hope you’ll have a good influence on me. You could inspire me to exercise the old pro-business libertarian ethos that helped me thrive, but has sagged in recent decades. You’d surely bring political competition and engagement that I long ago lost. I especially envy your Republican Party, which, unlike mine, not only wins statewide elections but also takes governance seriously.

I also see you as a natural ally in my biggest fight: against the president of the United States. As I’m sure you’re aware, he’s always had it in for you—maybe because he’s more an Atlantic City guy than a Vegas guy. He wants to turn you into a nuclear dump by reviving the Yucca Mountain proposal for storing nuclear waste.

As for me, things are so bad with the White House that Saturday Night Live recently broadcast a skit in which Trump rejoiced when aliens wiped California off the map. (It was well-done, but I didn’t laugh.) The president has called my elections massive frauds, and threatened to defund the entire state if I don’t sign onto his dumbest, most xenophobic policies.

Trump fans with ties to Russia have been encouraging the #Calexit movement to separate me from the rest of the country. And Trump’s buddy Nigel Farage, who led the Brexit movement, is now working in California on an initiative proposal to split me into pieces. Divide and conquer is what Trump wants. That’s why you and I have to unite and fight back.

I can feel your hesitation about a marriage. You may fear there’d be an imbalance in the relationship—I have 40 million people, and you have less than 3 million. But don’t worry. I won’t let the lights of Vegas dim a bit. And you’ll find that you have the same great deal as the rest of inland California. You’ll be subsidized by all the taxes paid by California’s rich coastal people, while you still retain the right to make fun of those same rich people’s many excesses.

Remember: We’ve already done great things together—Burning Man (you host, I send my people), cleaning up Lake Tahoe, reviving Britney Spears’ career, and the Cal-Neva Casino (back when Sinatra owned it, anyway). Las Vegas and Los Angeles—two entertainment capitals—are more deeply intertwined than any two American cities across state lines. Vegas is the leading source of new out-of-state residents of L.A. (It’s no accident that the great L.A. movie of this era, La La Land, turns on two Nevada-California drives—Emma Stone’s return to her suburban Clark County home, and Ryan Gosling’s decision to pick her up there, and drive her back to L.A. for an audition.)

And I hate to go negative, but do you really have other options? Utah is an attractive neighbor, I’m sure, but she won’t marry you unless you convert.

And if our marriage doesn’t work? No worries. You and I are both no-fault divorce states. So we’d just go back to being friends.