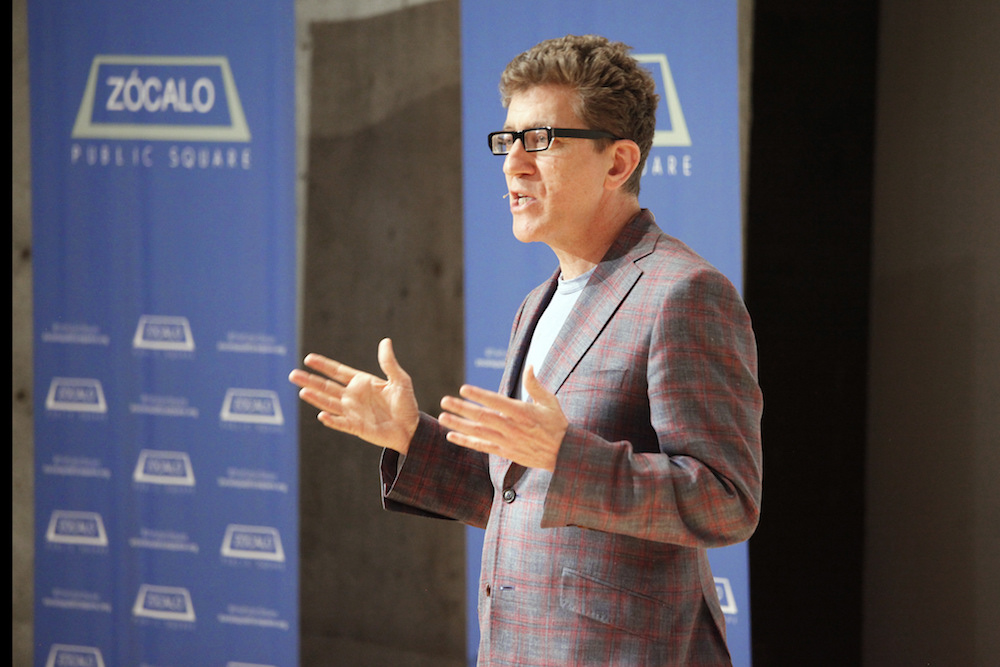 When sociologist Mitchell Duneier was growing up in the 1960s, he said, “references to the word ghetto were references in my house and in my segregated Jewish community on Long Island to the Nazi ghettos.”

A half-century later, Duneier, a Princeton University sociologist, explained to an overflow audience at the Museum of Contemporary Art in Los Angeles that the word’s meaning has become vastly different. “If I teach a class on the ghetto at Princeton, students expect to hear about the ‘hood, and are astounded to hear about Jewish history the first few weeks,” he said.

How the meaning of the word ghetto has shifted, and the importance of understanding its history, were the subject of Duneier’s talk, and also of his book, Ghetto: The Invention of a Place, the History of an Idea, which was awarded the seventh annual Zócalo Book Prize.

The meaning of the word ghetto already was in flux when Duneier was a child, becoming associated with African Americans in nearby places like Harlem and Brooklyn. At the same time, Jews like Duneier were coming to see their identity through the lens of the Holocaust, and the world was starting to understand what the Nazis’ forced segregation of the Jews had meant. “The Nazi ghettos were on my mind when I thought of the ghetto, but actually for most of Jewish history, it was really the ghettos of the early modern era that defined the understanding of Jews as to what ghettos were,” said Duneier.

The early modern Jewish ghettos, which began in Venice, Italy in 1516 and lasted until Napoleon abolished them in the early 19th century, had a number of distinctive characteristics, Duneier said. They were protective of both the Jews inside and wider society outside. They discriminated based on religious belief—you could leave if you converted. Their segregation was porous—you could do business and meet friends outside, coming and going over the course of the day. And they were physically overcrowded.

“I sometimes refer to the ghetto as the differentiating machine,” said Duneier. The ghetto takes people who are somewhat different, segregates them, and makes them even more different—thus providing a deeper rationalization for keeping them more separate and exotic over time. Over centuries, Jews became wholly different from the rest of society. At the same time, however, “they were able to carry on a way of life determined by beliefs. They could semi-flourish,” said Duneier. “They were degraded by their segregation but their life was ongoing.”

Fast forward to the University of Chicago in the 1920s, where sociology was trying to establish itself as a science, in part by using generalizations to explain social phenomena. A young sociologist named Louis Wirth wrote a book called The Ghetto that “said there’s this idea from Jewish history, the ghetto, that we can use to understand other racial and ethnic groups as well,” including Italians, Chinese, and African Americans in Chicago. Jews, meanwhile, had self-segregated to neighborhoods like the Lower East Side of New York, the West Side of Chicago, and Boyle Heights in Los Angeles. “For Wirth, the self-segregation of the Jews was a problem,” said Duneier. Wirth used the ghetto as an argument for assimilation, asserting that Jews had built invisible walls around themselves, ignoring the “intense, virulent anti-Semitism” underlying the ghetto’s creation.

Meanwhile, another scholar, Salo W. Baron at Columbia University, was making the opposite argument in a 12-page essay called “Ghetto and Emancipation.” Baron wanted readers to “understand all the ways in which Jews flourished during the age of the ghetto,” highlighting the benefits of this segregated way of life. Thus, on the eve of Hitler and the creation of a new kind of Jewish ghetto, “there was a debate over whether the ghetto was a good thing or a bad thing.”

Hitler used the medieval ghettos to rationalize his segregation of the Jews in ghettos. He told Catholic Church officials, “‘I’m just doing what you guys did for centuries,’” Duneier recounted. “‘I’m putting the Jews back in the ghetto. I’m going to really achieve the goal you had set for yourselves.’” The Church accepted this logic—as did journalists. Duneier quoted an article in The New York Times that read, “‘Hitler is recreating the ghetto of the middle ages on Polish soil.’”

Yet the difference between Hitler’s ghettos and earlier Jewish ghettos “is night and day,” Duneier said. Hitler’s ghettos were not protective but destructive. They discriminated by race; conversion was no way out. They were sealed off; trying to escape would get you shot. And they were full of disease, starvation, and severe overcrowding. “The Nazi ghetto was simply a link in the larger chain of execution that resulted in the deaths of 6 million Jews,” Duneier said.

So how did the ghetto, as an idea and concept, become black? The word didn’t truly become associated with African Americans until around 1945, which is why Duneier argues that the origins of this shift lie in the Nazi ghettos. Black servicemen were fighting in World War II to free Jews from concentration camps while at the same time African Americans in cities across the country were being segregated due to the rise of restrictive covenants that kept them out of certain white communities.

In 1945, University of Chicago graduate students St. Clair Drake and Horace R. Cayton published a book called Black Metropolis that highlighted a “contradiction between American ideals and American actions” that could be seen in the “black ghetto,” said Duneier. “They were essentially arguing that blacks were America’s Jews.”

The ghettos of America changed as the decades passed, and African American sociologists’ understanding of them changed, too, as different intellectuals wrote about what the ghetto meant in their particular historical moment. Kenneth Clark wrote about the ghetto as it was transformed by the federal government’s building of big housing projects. William Julius Wilson wrote about middle-class African Americans’ exodus from the ghetto, leaving behind an increasingly poor and isolated population.

In conclusion, Duneier asked “what kind of reference to the Holocaust or Nazi ghettos should be in this moment for people who are trying to understand the ghetto?”

The Nazi ghetto represents the most extreme form of control that’s ever existed for a ghetto, he said. But it was also a symbol of extreme resistance, in the form of the Warsaw Ghetto Uprising. Today, in our age of mass incarceration and extreme forms of control by the government, as well as tremendous resistance in the forms of movements like Black Lives Matter, Duneier said, “understanding the particular context in which African American intellectuals took up the word [ghetto] is more relevant than ever.”

Duneier then turned to the audience for a lively question-and-answer session that touched on the past, present, and future of the ghetto.

One audience member asked why the word ghetto hasn’t generally been used for Asian-American or Latino communities.

“I thought a lot about the application of the term to other communities and asked myself why certain communities may or may have not taken it up,” said Duneier. Long before Jews and blacks were segregated in America, restrictive covenants were used to keep the Chinese in certain neighborhoods—which came to be known as Chinatowns rather than ghettos. Latinos used the term barrio, and “had their own complicated history with that term.”

What can history teach us about recent social science studies of the ghetto?

Over the last few decades, said Duneier, social scientists have studied what happens when people are moved out of the ghetto into better neighborhoods. The results appear minimal. Yet these experiments are very short. One of the important lessons of the history of the Jewish ghettos is how long it took after the Jews left the ghetto for those effects of ghettoization to disappear, said Duneier. “It took a long time for the Jews to be able to integrate and to cast off many of the disadvantages that came with ghettoization. It took generations.”

Two questioners asked Duneier about the ghetto of the future: in America, where he sees economic segregation possibly replacing racial segregation; and across the world, as borders dissolve and nation-states evolve. Could an entire nation-state be ghettoized in the future as resources grow scarce and the gap between rich and poor grows, the audience member asked? 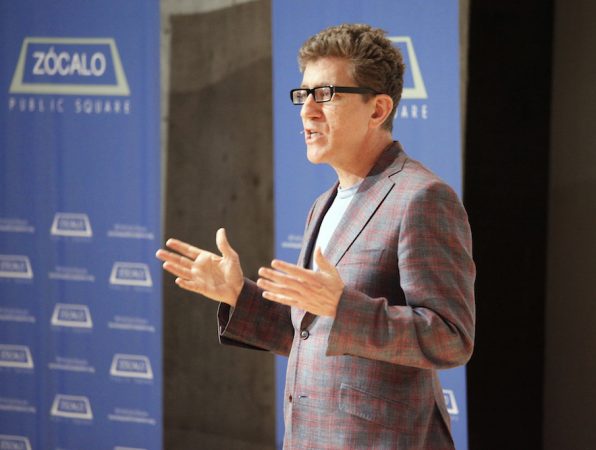 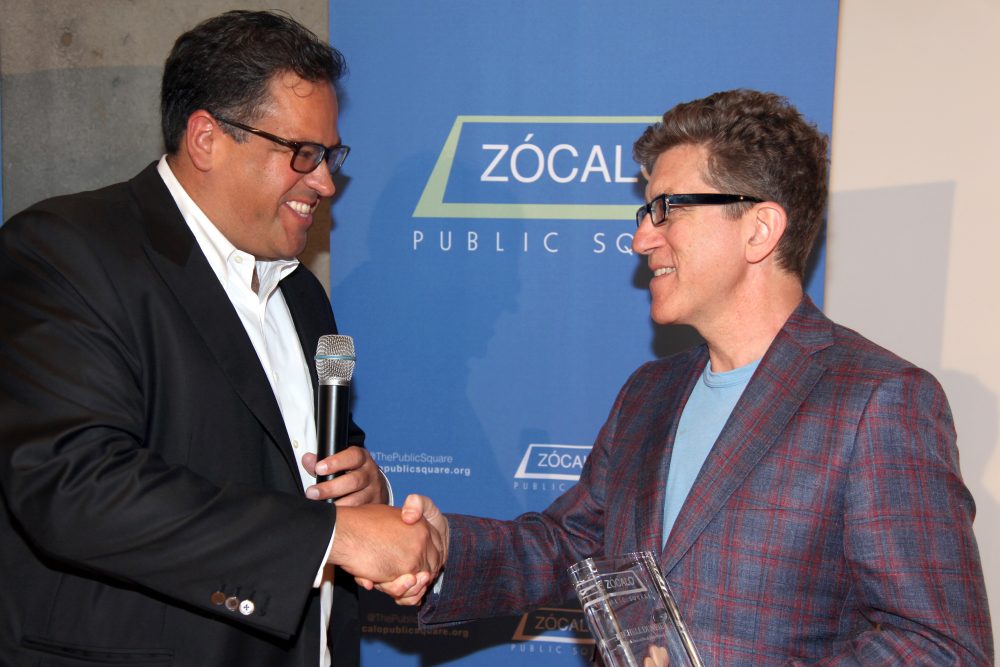 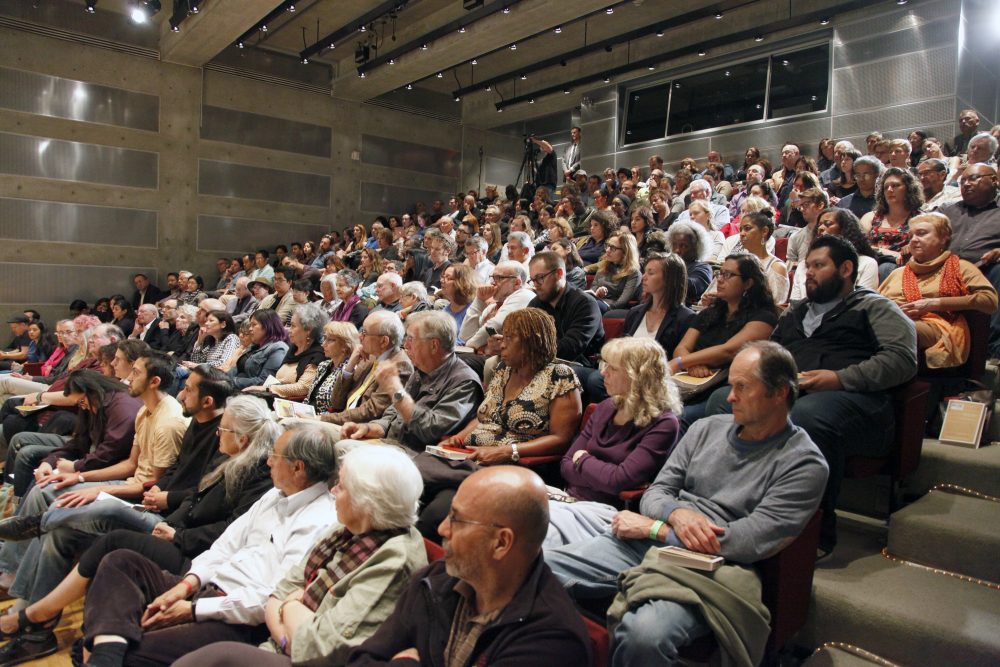 A full house at the Museum of Contemporary Art. 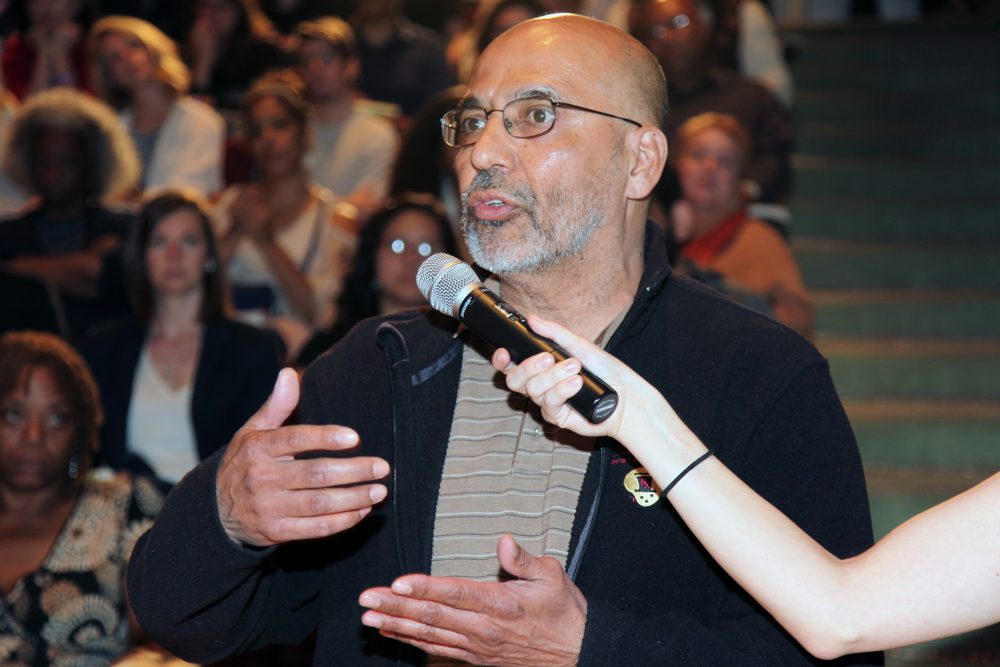 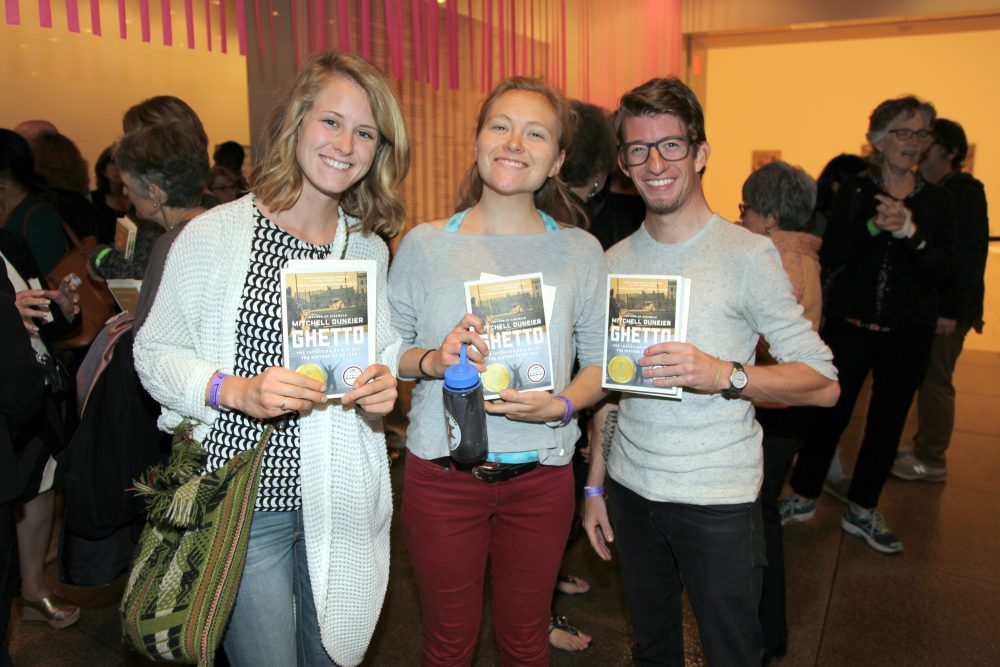 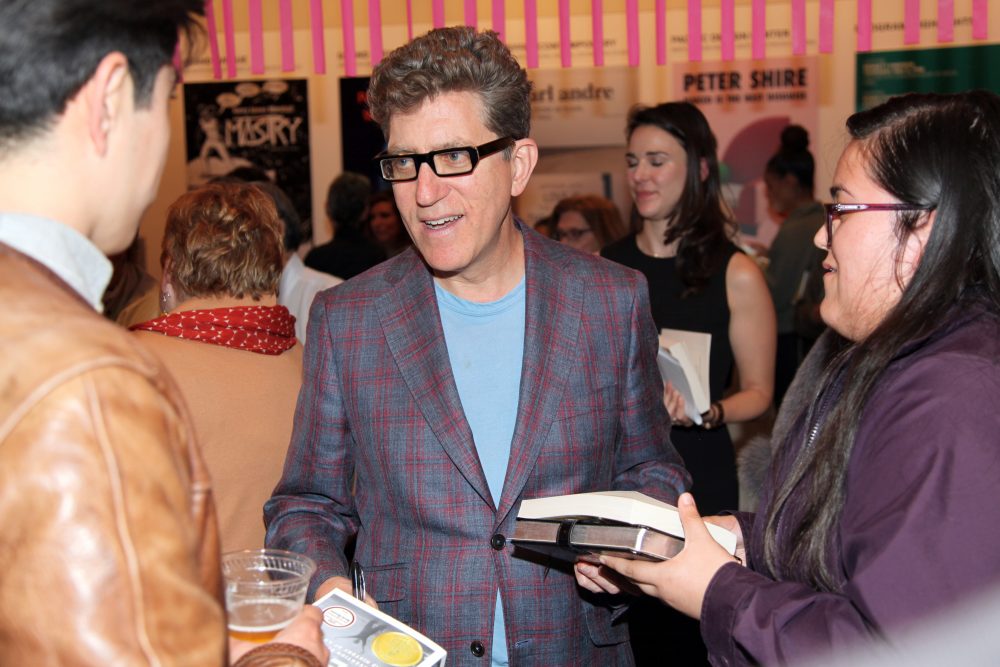 Mitchell Duneier speaks with guests at the reception.