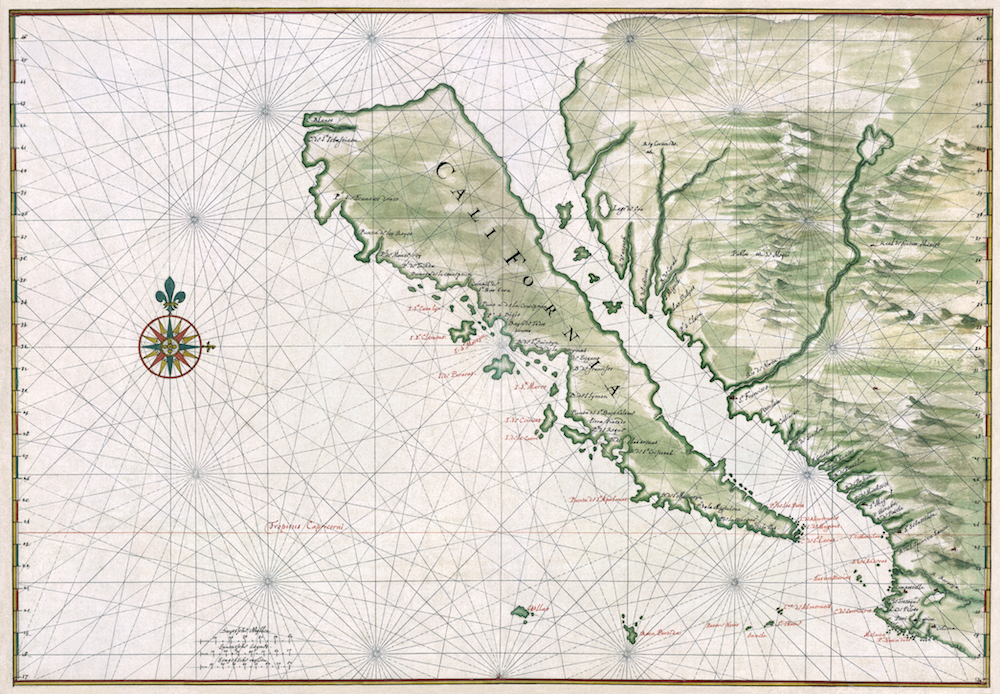 Drifting apart: Map reflecting the impression of some early European explorers who thought California was an island apart from the continental mainland. Image courtesy of Wikimedia Commons.

I suppose I should wish you happy birthday. But I’m just not feeling it.

You and I, the United States and California, used to be pretty darn close—“indivisible” was your word and “inseparable” was mine. Sure, we had our differences—I’ve always been a little out there—but the differences were what made us a successful partnership.

America wouldn’t be America without California, and California was proudly part of America, which tolerated our excesses for our mutual glory. President Clinton, in a speech at UCLA during the early ‘90s, reminded us: “Don’t ever forget that California is still America’s America, the cutting edge for a nation still a symbol of hope and optimism throughout the world.”

But you and I have been drifting apart in a thousand small ways and some pretty big ones since then. Today, I look at you and feel like I’m an entirely different place, with different values, mindsets, even different realities.

I never used to think this, but now I find myself wondering about our future: Do you and I even have one together?

When I think of the problems in the relationship, it’s really not me. It’s you. While I’m the almond-producing state with a well-deserved reputation for flights of fancy, you’re the one that has gone nuts.

Now, everyone is entitled to a mid-life crisis, even 18th-century republics. But you are having an especially nasty one. Sometimes I feel like you’ve turned against everything you used to love: immigrants, trade, international alliances, voting rights, women’s rights, science, national parks, building infrastructure, and a certain stoic and respectful demeanor.

These days, you’re constantly freaking out. And the government you installed in Washington—a government my voters opposed by historic margins—is trying to take away people’s health care, make it harder to vote, roll back environmental and climate regulations, restart the failed drug war, defund Planned Parenthood, and pick fights with my best foreign friends and trading partners, perfectly friendly countries like Mexico, Canada, Germany, Sweden, and South Korea.

Couldn’t you have just bought an irresponsibly expensive sports car instead? I mean, you’ve got the global reserve currency to afford one.

Now, all of this crazy nonsense is pretty bad. But here’s what’s even worse, and maybe unforgivable: Your people, your media, and your elected officials keep trying to justify your crack-up as just a natural reaction to what you say is my awfulness. In your narrative, I’m too coastal, too elite, too rich, too educated, too Hollywood, too tech, too globalist, too uninterested in the pain of the rest of the country, and thus too out of touch with you. And so you’ve had to go stone-cold nuts to get my attention, to wake me up.

When I think of the problems in the relationship, it’s really not me. It’s you. While I’m the almond-producing state with a well-deserved reputation for flights of fancy, you’re the one that has gone nuts.

That thesis is—how do I put this?—exactly what the cows drop in Tulare County pastures after a good feed.

I shouldn’t have to say this, but my people and I know the pain of poverty (we’re tops in the nation in it), economic dislocation (just look back at the carnage of our 1990s recession and our late 2000s housing crisis), and drug abuse. There is no American malady I don’t suffer, with the exception of bad winter weather.

So the fact that you keep projecting your outrageous behavior onto me—while supporting a federal government that believes all these problems will be solved by cutting the taxes of my many millionaires and billionaires—tells me that you’ve taken leave of your senses.

I’m also starting to worry that your insanity and your lack of a coherent foreign policy in East Asia is going to end up getting me nuked by North Korea.

So, going forward, our relationship can’t be the same.

Now, I’m not going to march out the door and become my own country, like the crazy, Russia-compromised #Calexit movement proposed. You are still my country, and I’m not surrendering you. Plus, if I did become independent, I don’t think I could ever sleep at night with a nation as violent and volatile as you on my northern and eastern borders.

But I do need to put some distance between you and me. Let me put it this way: I need some boundaries, but I don’t mean a wall. I need to stand up for myself, and think about my own needs and protection first.

“America, whatever” is its attitude; “California first,” is its policy. The initiative sets up a structure with the express purpose of “buffering Californians” and their values (respect for diversity, science, and democracy) “against chaos, dysfunction, and uncertainty at the federal level.”

In the meantime, it sets up a structure so that California behaves more like its own nation, and looks out for its own interests. Your and my relationship should be, it argues, less about any lingering feelings of love and loyalty, and more about business.

While you slide toward republican authoritarianism, the initiative proposes that California—a place where the people who get the most votes actually win the elections—will stick up for democracy. We will fight for the universal right of all adult citizens to vote, even if you continue policies that make it harder for people to vote. We will challenge attacks on our immigrants, our world-class cities, and our highly effective anti-smog policies.

“As Californians, we have much to gain and little to lose by pursuing autonomy,” the measure says, adding: “The path to both autonomy and full independence is largely the same; for California to take stock of the leverage it has over the United States, and to use this leverage to negotiate for ever greater autonomy.” For example, my people should seek changes to tax and budgeting policy so that I’m not paying more in taxes than I’m getting back in services. And I’m not interested in subsidizing your irresponsible debt or your constant wars, which my people don’t support. And while I’m at it, I’ll be demanding the representation I deserve—starting with more than two senators.

The initiative’s proposed commission—which is modeled on one of California’s most enduring governing entities, the reform body known as the Little Hoover Commission—would pursue both federal and state policy changes and demand progress from elected leaders on ever-greater California autonomy.

It’s not a perfect idea. For one thing, the initiative would name the commission after Juan Bautista Alvarado, an obscure 1840s governor who supported greater California autonomy under Mexican rule. But he also had a colorful personal life, including a drinking problem so bad that he didn’t make it to his own Santa Clara wedding (his half-brother had to stand in for him). It would be better to name the commission for General William Tecumseh Sherman, who is both a major California figure (as an Army officer during the Gold Rush and a leading banker of 1850s San Francisco) and an American military hero who famously marched through some red states with voter registration issues.

Yes, I’m going my own way. But my people are just as American as yours, and so on July 4, I’ll still host many millions of barbecues, and enough patriotic parades and fireworks displays for 39.5 million of your citizens. Back east of the Sierra, I hope your celebrations are bigger and louder than ever, and that your people will stand extra close to the fireworks.

Maybe all the explosions will wake you the hell up.