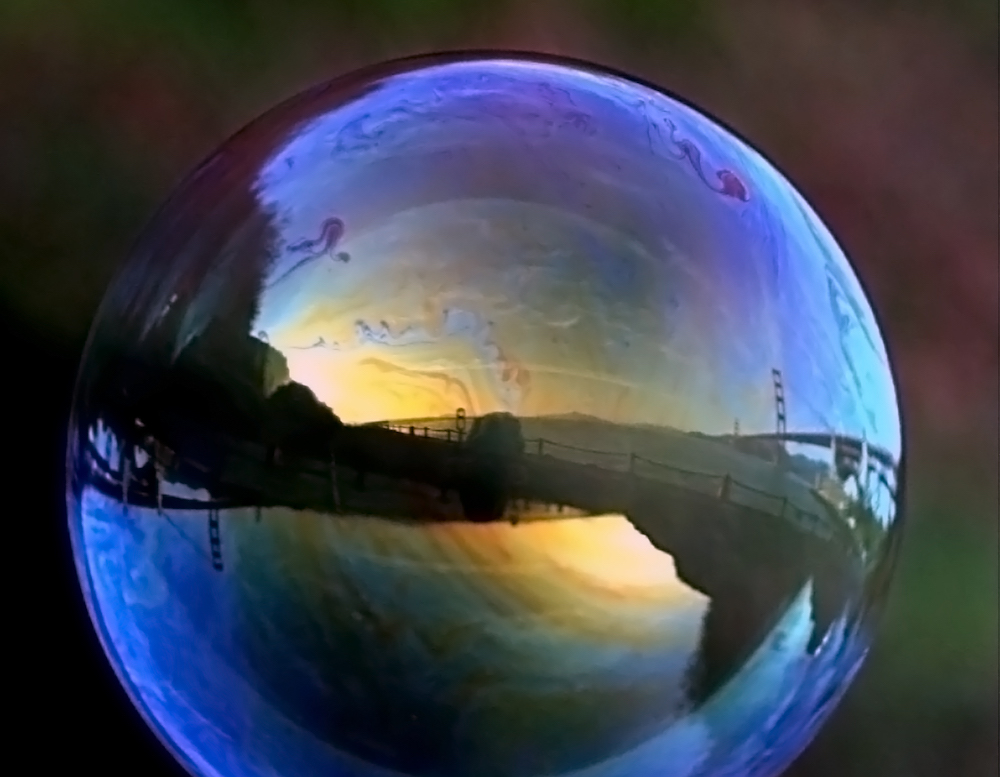 The Golden Gate Bridge is reflected in a soap bubble. Image courtesy of Wikimedia Commons.

California, do you want to be an incubator for great ideas—or a bubble that shuts out the world?

That’s the question Californians need to ask, as we simultaneously confront three big challenges: building a more sustainable economy and future; reckoning with our crisis-level shortages in housing and infrastructure; and protecting ourselves from a deranged Trump administration.

The bubble-or-incubator question is also the best way to understand the many hot fights being waged in the state legislature during this muggy Sacramento summer.

The recently concluded debate over legislation to extend California’s cap-and-trade system on greenhouses gases is a classic incubator-or-bubble question. Can our pollution market be an incubator that the rest of the world can adopt, as Gov. Jerry Brown and the legislation’s successful backers argued? Or is the Golden State pursuing a lonely and foolish one-state war on climate change that will land us in a bubble of costly climate regulations that destroy our economic competitiveness?

The huge and complicated debate in the state legislature over how to change state housing policy offers a different spin on the question. Can California devise ways to incubate new and more affordable housing? Or will it allow local NIMBYS to ignore the housing shortage and maintain their cities as anti-growth bubbles, cut off from reality?

And finally, the temptation to turn California into a protective bubble is strong—particularly when it comes to defending Californians from the Trump Administration. But Californians will be safer, and these protections will be stronger, if we carefully design strategies that enable other states to follow our lead.

The best example of this dynamic arises in the so-called “sanctuary state” legislation that seeks to protect California’s immigrants by limiting local law enforcement’s ability to collaborate with federal immigration authorities. The case for such protection is overwhelming: Undocumented immigrants are our family members and neighbors; we’re all safer when undocumented people feel safe reporting crime; and ICE (the federal Immigration and Customs Enforcement agency) has been so abusive and reckless as to seem out of control.

But the state’s proposed bill has divided California law enforcement, with vehement opposition from county sheriffs, even in our biggest and most immigrant-friendly cities, who argue that they need a freer hand to cooperate with the feds in the handling of undocumented immigrants in their jails. The bill may well pass despite their opposition, but that could leave California relatively isolated as a fiercely pro-sanctuary state. It would be far better to make compromises in the bill to win the support of big city sheriffs, who might otherwise be compelling national advocates for sanctuary policies.

It’s hard work being an incubator. You have to engage with people you don’t like. You have to address not only your own problems, but also other people’s. But what is the point of a place as rich and lucky as California if it’s only going to be for itself?

Policy change is hard in a place as big and diverse as California. In some areas, the state, by failing to update itself, has forfeited leadership and become an anachronistic bubble.

The clearest example of this is in higher education. A half-century ago, the state’s Master Plan for three distinct university systems—UC, Cal State, and community colleges—was an innovation. Today, it’s a straitjacket that has made each university system its own isolated universe, limiting the kinds of collaborations with other universities and online educational experiments necessary to produce the greater numbers of college graduates that the state needs. Higher education is also reckoning with the bubble-or-incubator question in the debate over free speech on campus: Should our universities be insular safe spaces that protect students as they are educated, or do universities, as incubators of the future, need to permit more collisions of people and ideas, even those that offend or harm?

In economic matters, the benefits of incubation are clear in California. Hollywood is struggling because it remains too much bubble—smug, insular, and slow to diversify—while Silicon Valley prospers because it promotes openness and connection. But incubation can be overdone. In the Bay Area, there are so many incubators (or, if you prefer, combinators or accelerators) that they comprise their own sector. Nearly every start-up or nonprofit in California has some convoluted explanation of why it’s a “new model” of something-or-other, but there’s more to being a good disseminator of ideas than simply claiming they’re “new” to generate buzz and investment.

The state’s obsession with incubating new models has made it common for protectors of bubbles to pass themselves off as incubators. Consider the new “California model” that the state school board is touting to track the progress of schools. Sounds new, but it’s really a nasty fraud—a fiendishly complicated and deceptive system that makes it harder for parents and communities to hold campuses, teachers and their unions accountable.

In health care, the controversial Senate Bill 562 is similarly fraudulent. Its backers pitched it as a single-payer system that would incubate change across the nation; in fact, the bill was no such thing. It failed to include the basics of such a system—like controls on costs or utilization of medical care, or ways to pay its $400 billion costs. Instead, it effectively proposed a massive transfer of taxpayer dollars to well-off medical professionals who backed it.

In many ways, California is a bubble of distinctive regulations and laws, which are hard to unwind, especially in a state with so many lawyers. Right now, it’s not helping matters that the new attorney general, Xavier Becerra, is a veritable bubble machine. Some of that’s justifiable: He’s filing lawsuits to protect our state’s policy priorities from the Trump administration.

But he’s also responsible for the most foolish bubble-expanding policy of the year: expanding enforcement of a new California law that bans paid travel by state employees to states that have discriminatory laws on the books. Becerra has now listed eight states (Texas was among the recent adds) under this travel ban. Opposing discrimination is the state goal, but this ban is counterproductive. How are Californians to spread our more inclusive cultural values—and all the great ideas we’re hatching—to such places if our government representatives can’t visit them?

It’s hard work being an incubator. You have to engage with people you don’t like. You have to address not only your own problems, but also other people’s. But what is the point of a place as rich and lucky as California if it’s only going to be for itself? Incubators birth new things. And bubbles tend to pop.