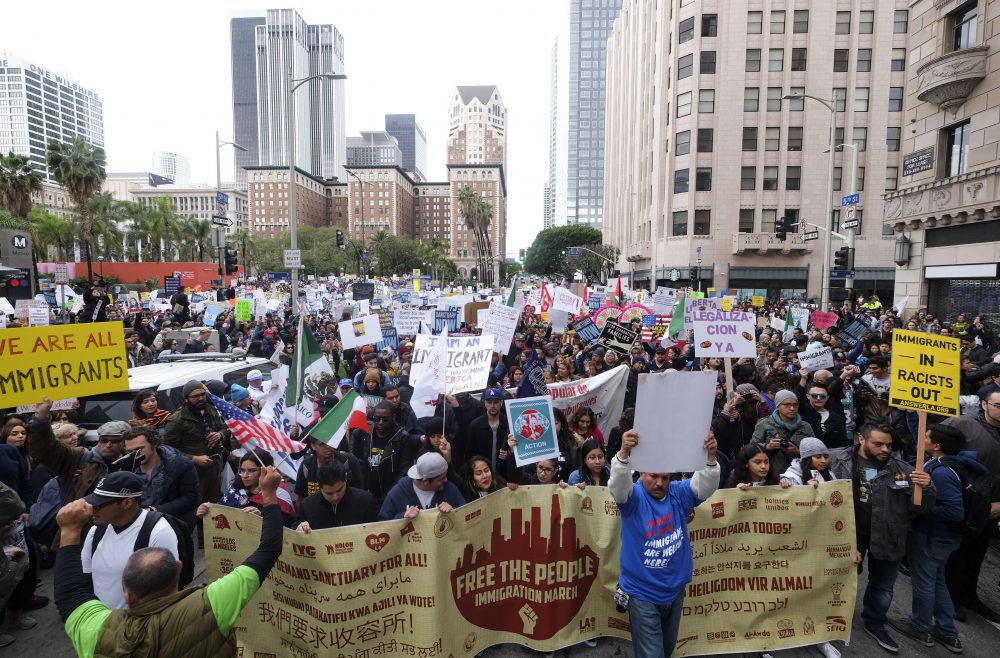 Since the onset of the Trump era, we’ve been witnessing a very strong and measurable response by immigrants in Los Angeles. This response includes Latino, Asian, and other immigrants. It’s evident in civic participation and in opposition to Trump immigration policies—as well as to the broader anti-immigrant atmosphere that the Trump administration is fostering. The response is demonstrable in voting patterns, in the increasingly progressive leanings of immigrant voters, in the large numbers of immigrants or children of immigrants who are running for state and local office in Los Angeles and across California (and successfully raising money to do so), and in other manifestations of a highly energized immigrant base.

I believe that the Trump presidential campaign, and certainly the Trump administration’s policies, are a deliberate attempt to disenfranchise immigrants, and even latter-generation children of immigrants, from American politics. The Trump administration is doing this through its current efforts to go after “voter fraud” as well as through its onerous immigration policies. In response, what you’re seeing in California and Los Angeles is immigrant voters asserting themselves in opposition.

This tendency didn’t originate with the 2016 election; it has been growing over time. Our data clearly show that in California, specifically in Los Angeles, immigrant voters—including those who are now U.S. citizens—are much more politically progressive than more assimilated immigrants, and more than Democrats overall, as measured by the candidates they back and the policy initiatives they support. That’s true of immigrants in general, as well as immigrants belonging to the two largest immigrant groups, Latinos and Asians

Immigrants who can vote, and are U.S. citizens, don’t have the same amount of fear as non-citizen immigrants, and don’t have to worry about living in the shadows. Nonetheless, they’re highly motivated to vote because they may be trying to protect other members of their immediate and extended families, their neighbors, or their friends and colleagues.

The main point here is that the California’s movement toward becoming a deep-blue state—from a state in which the Republican presidential candidate used to be competitive in an election, and in which it wasn’t unusual to have a Republican governor, to a state in which those conditions seem unlikely—is due in large part to the migration of Latinos and Asians from being moderates, or showing equal support for both parties, to now being overwhelmingly Democratic. While it’s well-established that the battle over Proposition 187 and the 1994 governor’s race drove Latinos in droves to become Democrats and progressives, there also has been a dramatic migration of Asian voters to the Democratic Party, partly as a reaction against Republican policies.

… the Trump administration’s policies are a deliberate attempt to disenfranchise immigrants, and even latter-generation children of immigrants, from American politics. … In response, what you’re seeing in California and Los Angeles is immigrant voters asserting themselves in opposition.

What drives them is, number one, their desire for policies that protect all immigrants, and, number two, their support for providing social services to immigrants, especially education. That’s why immigrants overwhelmingly vote for school bond measures—and other measures like public mass transportation, on which immigrants tend to be much more dependent than the population as a whole.

Here’s a prominent example of how L.A. and California politics have been affected by the migration of immigrants to the progressive side of the political spectrum. In 1996, Ron Unz, who ran for governor, also helped fund and spearhead an initiative that basically outlawed bilingual education. His supporters would never say that bilingual education should be outlawed, but the conditions that the initiative imposed on how bilingual had to be taught were so onerous and difficult for both school districts and parents that, for all intents and purposes, it eliminated bilingual education in many classrooms.)

It was a highly contentious and debated issue in the ’90s. But by last year, California voters had changed so much that the initiative never captured the voting public’s imagination or became an issue. The 2016 vote to overturn it, through Proposition 58, easily passed by a 73 to 27 percent margin.

Immigration-driven changes to politics don’t show up only in voting patterns. They also change who runs for office. These patterns were made visible in this year’s April 4 special election for the 34th U.S. Congressional District, and in the June 6 runoff. Significantly, many of the candidates running for the 34th Congressional District were children of immigrants from Latin America and Asia, as were many of the candidates running for Assembly District 51 to replace Jimmy Gomez, who won the 34th Congressional seat.

We’re seeing similar patterns nationally in the reaction to Trump—in the number of immigrants who are thinking about running for office, including those who have declared as candidates for Congress in 2018. The number of people who’ve announced their candidacies for congressional seats is much higher at this point in time than in any previous era in memory—and not only the total number of candidates, but also the number of candidates who have raised money. It is not inconceivable that of the eight statewide offices on the ballot in California, five could be won by Latinos and two by Asians.

What happened in the 34th in Los Angeles this year is a precursor to everything that we’re going to see in 2018: We’re going to see a lot of people running for office for the first time, and a lot of young people—including immigrants and people who work for and with immigrant groups. Of course, you don’t have to be U.S.-born to run for Congress, although you do have to be a U.S. citizen.

Mayor Garcetti’s re-election illustrates that immigrant and minority voters will support candidates of other ethnicities, if those candidates take positions that are perceived to help immigrants and minorities. White voters across the country, all other things being equal, will vote for white candidates to a much greater degree than Latino voters will vote for Latino candidates given similar choices. This is contrary to the conventional wisdom—people often think, and say, that Latinos voting for Latinos is ethnic politics, but they never say that whites voting for whites is ethnic politics. But we have a lot of data that shows whites vote for whites to a greater degree than Latinos vote for Latinos.

Greater Los Angeles provides a strikingly clear example of how Trump’s policies are driving immigrants of all ethnicities and nationalities to become more politically active and more politically progressive. It’s all about the current immigration issues—including issues such as homelessness and sanctuary cities—which many people feel aren’t being dealt with at the federal level. L.A. immigrant voting and civic participation trends bode well for Democrats, and badly for Republicans, in the years and decades to come—both in California and the nation.