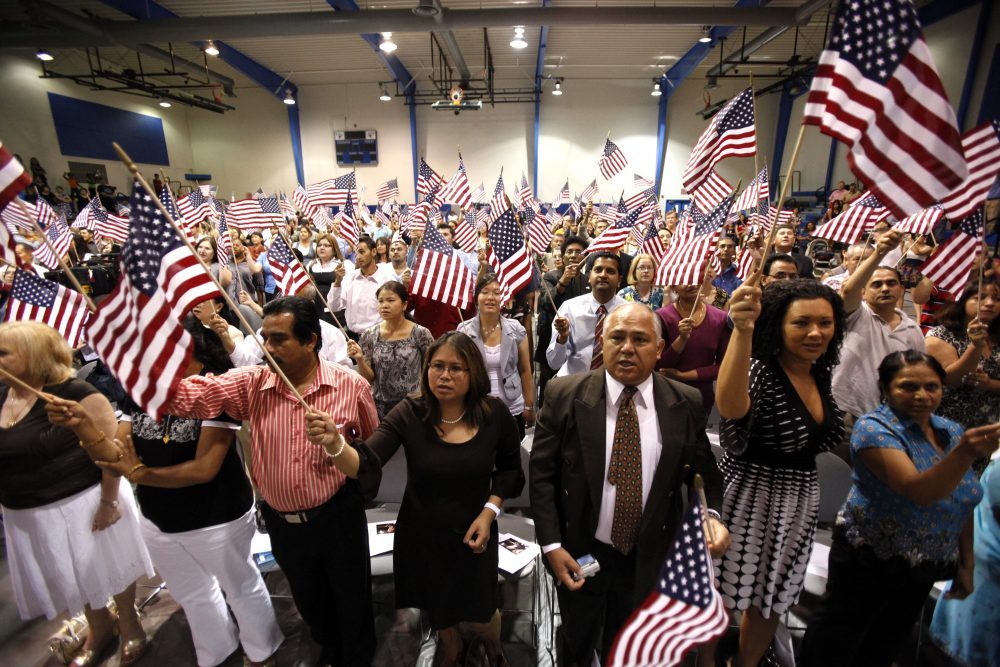 People hold flags as they are sworn in as U.S. citizens during a naturalization ceremony in Phoenix, Arizona, July 2010. Photo by Rick Scuteri/Associated Press.

Is it any wonder that immigrant Los Angeles finds itself in the eye of Tropical Storm Don?

President Trump has stormed in with talk of Muslim travel bans, plans to build a wall along the Southern border, and ambitions to deport millions. And Los Angeles County has been ground zero for immigrant flows and immigration issues for decades. In the early 1980s, roughly a fourth of all immigrants coming into the United States came in through the county, prompting the anxiety and fears that in 1994 led to Proposition 187, a ballot measure that sought to strip the undocumented of any access to education or other public services.

While the pace of immigration has dramatically slowed—in fact, the share of the population that is foreign-born has been on the decline for the last several years in L.A. County—the earlier demographic tidal wave permanently changed the shores it hit. Today, roughly one-third of all county residents are foreign-born, nearly half of the workforce is immigrant, and just over 60 percent of the county’s children have at least one immigrant parent.

Any changes with immigration policy and immigration rhetoric at the national level are bound to have a local impact here. This is particularly true of the new president’s focus on “illegal immigrants” and his promise—one of the few to be put into effect—to unleash Immigration and Customs Enforcement (ICE) on a wide swath of people without legal status in the country.

In the last few years of the Obama administration, emphasis was placed—not always successfully and not always fairly—on deporting those with criminal records. What Trump has done is to essentially throw away any priorities: Anyone in the country without proper papers is fair game.

The threat of this new deportation regime is worrisome for many communities in the United States. But Los Angeles is an especially juicy target for ICE: Of the roughly 11 million undocumented immigrants living in the United States, nearly one million are in L.A. County. And while some may still think of the undocumented as recently arrived single men whose removal is regrettable but impacts them alone, that is clearly not the case in Los Angeles.

Here, people with legal standing and those without are thoroughly intertwined both personally and economically. More than 60 percent of the county’s undocumented have been in the United States for longer than 10 years, and roughly one-fifth of the county’s children have at least one undocumented parent. Families of mixed legal status are now the norm. There are about 800,000 U.S. citizens and another 250,000 lawful permanent residents who live with an undocumented family member.

That’s a lot of our neighbors—and we’re not counting all the undocumented relatives who may live nearby but in other households. We’re also not counting intimate non-family relationships: all Angelenos who rely on the undocumented to mow their lawns, take care of their kids, or clean their houses. In present-day Los Angeles, every deportation is likely to disrupt a family, damage a business, and weaken a community—and so what happens to and for immigrants really matters for everyone.

Trump has left us living in a disquieting scenario, one that Cynthia Buiza, executive director of the California Immigrant Policy Center, describes as being “between hope and fear.”

The hope lies in the way the state’s immigrant and social movements have, in Buiza’s words, “tried to create a firewall around Trump.” Pressure has been placed on the state legislature to pass a California Values Act (SB 54) that would spread “sanctuary city” policies of non-cooperation with ICE across the state. Meanwhile, in Los Angeles, a combination of county, city, and philanthropic dollars have been pooled to create a $10 million L.A. Justice Fund that will provide resources for the legal defense of undocumented individuals facing the threat of deportation.

Here, people with legal standing and those without are thoroughly intertwined both personally and economically. … Families of mixed legal status are now the norm. There are about 800,000 U.S. citizens and another 250,000 lawful permanent residents who live with an undocumented family member.

Despite such efforts, there is understandably plenty of trepidation on the part of immigrants. Local law enforcement agencies note that reports of sexual assault and domestic violence from Latino communities have fallen dramatically—not because there is less crime, but because there is less reporting. Meanwhile, county health officials are noticing a trend in which activity in local clinics is on the decline—but activity in emergency rooms, often for illnesses that should have been treated earlier, is on the upswing.

The actual scale of the deportation threat in L.A. County has been somewhat muted by several factors, including the unwillingness of local police forces, particularly the LAPD, to cooperate with ICE, as well as several effective “know your rights” campaigns by immigrant-serving organizations. But the fear is palpable and justified: There have some well-publicized cases, including the detention of an immigrant activist and student at Cal State Los Angeles, and many of us are living with the constant worry that a relative, neighbor, or co-worker will be snatched away.

There are also well-placed concerns about what might happen with DACA, the Obama-era executive action that granted temporary status and work permits to the so-called Dreamers—undocumented youth who came to the United States at an early age and basically grew up as Americans. Roughly nine percent of all those eligible for the program nationwide were county residents, and it is likely that Angelenos constituted an even larger share of those who applied, given the maturity and depth of the immigrant-serving infrastructure here in Southern California.

So far, the Trump administration has not stopped the popular program. But as Kent Wong, director of the UCLA Labor Center, puts it, “DACA seems to be hanging by a thread.” If the president finds his policies stalled by Congress and his political standing threated by a special prosecutor, it may be tempting to shore up the support of his base with polarizing actions that do not require legislative approval.

Gutting DACA would check both those boxes: It can be done by presidential fiat, and it targets a population of “illegals” despised by a base of voters who seem unaware that no DACA recipient is actually going after their jobs in, say, coal mining. Moreover, to gut DACA would be to go after some of the most vibrant immigrant youth organizers in the anti-Trump resistance: dreamers who were instrumental in securing DACA, and have benefited from the program.

So how will L.A. respond if Trump further targets immigrants?

In the immediate future, it will be all about defense. Fortunately, major political figures like L.A. Mayor Eric Garcetti have spoken strongly against the presidents’ immigration policies while Los Angeles County has moved forward with a new Office of Immigrant Affairs that will work with immigrant families to protect their rights and further their futures. The landscape is not without landmines: In tiny Cudahy, for example, pro-Trump activists from out of town are seeking to strip the fiscal base of the city (via a proposed ballot measure to end a utility tax upon which local government relies) as punishment for its status as a “sanctuary city.” But the general direction is positive.

One important effort that could help more: L.A. institutions should assist those legal immigrants who can become naturalized citizens to do so. Citizens are likely in a better position to defend their relatives—and to punish those opportunistic politicians who seek to divide. In L.A. County, nearly 800,000 adults could make that passage to citizenship—and to voting—and many organizations are stepping up to this task. An innovative program in the city libraries provides information to would-be Americans.

In the longer haul, Los Angeles will need to understand what the Trump threat has revealed: So many of us are immigrants—and so many others are one generation, one relative, one neighbor, or one co-worker away from the immigrants that Trump now threatens.

Because of this, immigrant integration is everyone’s business. And that will require that Los Angeles go beyond shoring up legal protections and promoting citizenship—key as these are—and also work to provide English classes for immigrant adults, strengthen education for their children, and secure a real toehold for immigrants in the local economy.

In the current choice between hope and fear, we Angelenos cannot adopt a false optimism—people really are under threat. Nor can we be paralyzed by panic. Instead, we must choose a third path: We must show the rest of the country what the future can be if we put aside racialized anxiety, celebrate the contributions of many people and cultures, and build the economic, social, and policy platforms for communities to thrive.