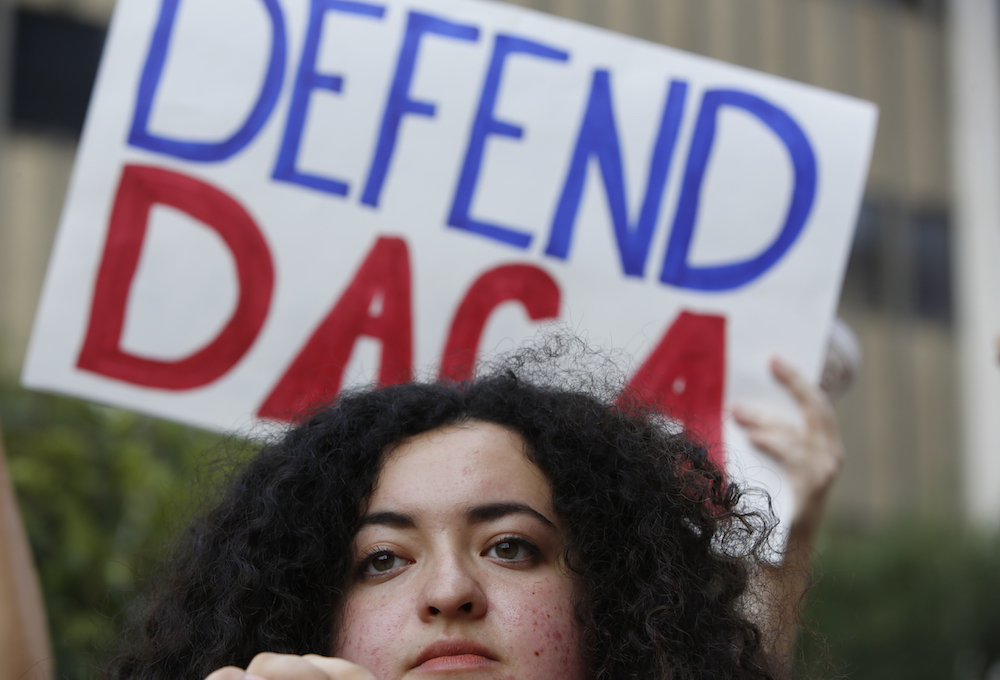 MEMO
To: Acting U.S. Secretary of Homeland Security Elaine Duke and Attorney General Jeff Sessions
From: The Golden (and Still Sovereign!) State
Re: An alternative to your mass deportation of Californians

This is a legal proposal, but I must start with the following stipulation.

You are engaged in deportation of undocumented Californians, including many who are neither criminals nor threats to public safety, and are crucial members of our communities, our workplaces, and our families. In removing parents, you routinely orphan children who are U.S. citizens, and in the next breath say you are for “America First.” Your next targets for removal are the 800,000 young people known as “Dreamers,” people who were brought to the U.S. illegally as children. Some 220,000 Californians are Dreamers, the most of any state.

I take comfort that, if God is just, you are eventually going to hell. But that doesn’t solve my problem: all the damage you can do before you check into the Hotel Underworld.

As the state of California, I am suing you and doing everything I can to foil your rotten plans. My police departments and public institutions and religious communities are resisting your efforts to remove Californians. I am treating undocumented immigrants more like any California resident, including issuing them drivers’ licenses. And now, my legislature is in the process of passing legislation to make all of California a sanctuary.

California is slowly moving toward something extraordinary: creating a new legal concept of California residency that includes most of my two million-plus undocumented residents. This is a very American thing to do. While the U.S. Constitution requires uniform standards for citizenship, there is no such requirement of uniformity when it comes to legal residency.

In this context, your deportations are abusive. It is one thing for the federal government to grant legal permission to live and work in every state, and quite another to forcibly remove residents of a state against the will of that state’s people.

Tragically, my people can’t stop you entirely from mass deportation, since immigration enforcement is the province of the federal government. But we can slow you down, deluge you with litigation, pass sanctuary state legislation, target you with protests, and work politically with like-minded people in other states to undermine the very legitimacy of your government.

This ever-escalating conflict is dangerous to California and the country—and I fear that such a fight is exactly what you are trying to start. The president’s political advisor Roger Stone has called for a new Civil War, and, as the Charlottesville aftermath has made clear, President Trump is keen on refighting the last one.

But if civil war is not your intention, let’s make a deal that would protect Californians and perhaps de-escalate the conflict, at least over immigration.

While the U.S. Constitution requires uniform standards for citizenship, there is no such requirement of uniformity when it comes to legal residency.

Under this deal, Congress and your administration would grant California an exemption from federal immigration law, in much the same way I have special exemptions to go my own way on certain environmental policies such as air pollution.

In effect, I, California, would win the power to designate certain people—undocumented folks who meet standards that my elected officials determine—as California residents who would have a legal right to live and work here even if they are not U.S. citizens or legal residents of the United States. This residency would apply only in California, though I would hope that other states achieve similar carve-outs.

The federal government could still deport people, but with a couple of conditions. If a California resident were detained for immigration enforcement in another part of the country, he or she would have to be deported not overseas but back to California. And if the federal government decided to go ahead and deport a California resident out of the country, it would—under the contract I’m proposing—pay all the costs of that deportation.

In my view, you, the federal government, should cover the legal expenses of any California resident you deport, and the costs of providing care, replacement income, and schooling for children and other family members that the deported person leaves behind here. You won’t be able to do what you’re doing now: creating “ICE orphans” via deportation, and sticking California governments and families with the bill.

Here at home, we’d have to create standards for deciding who is a resident. A leading advocate for this idea, Dave Marin, the research and policy director for the California Freedom Coalition—which is working for greater autonomy for the state—points out that state legislation appropriating money for legal aid to the undocumented already offers a list of people that Californians consider our own. These include anyone who has family members who are U.S. citizens or legal permanent residents; veterans of the U.S. military and their spouses; asylum seekers; the so-called “Dreamers”; and just about anyone else who hasn’t been convicted of a violent felony.

Such a concept of California residency is not new. In 2002, the state’s reform body, the Little Hoover Commission, suggested creating a “Golden State Residency Program” as a way of accelerating the integration of immigrants, including the undocumented, into California society. The proposal was that anyone who was participating in their local community should be considered a resident, with all the rights and responsibilities that that entails.

“Immigrants feature prominently in California’s contemporary and future prosperity,” Little Hoover’s report said. “Helping them integrate—meaning to develop a sense of belonging, to take responsibility for the quality of life in their neighborhoods, and to seize opportunities for success—is a key challenge for state and local leaders.”

Residency is not ideal; it still leaves sub-class of people who have full rights only in California. But it’s the best that can be done until the day when a federal administration fully legalizes undocumented people. And residency is principled in one fundamental way: Californians should get to decide who gets to live and work in our state—not a faraway federal administration that routinely slanders us.

Will you, the Trump administration, do this deal? I suspect not. Your preference so far has been to undermine the American institutions that produce compromise. And you prefer to lie and scapegoat diverse California—you think it fires up your racist base—rather than learn from our long experience with immigration.

One of America’s most notable traditions is our federalist system—letting states choose their own paths and then seeing how things work out. California is confident that being a haven that integrates immigrants into our society will produce far more greatness than your approach of removing millions of people and breaking up families in the process.

So what will it be? Will you make a deal that respects California’s sovereignty? Or are you dead-set on waging war against your country’s largest state?