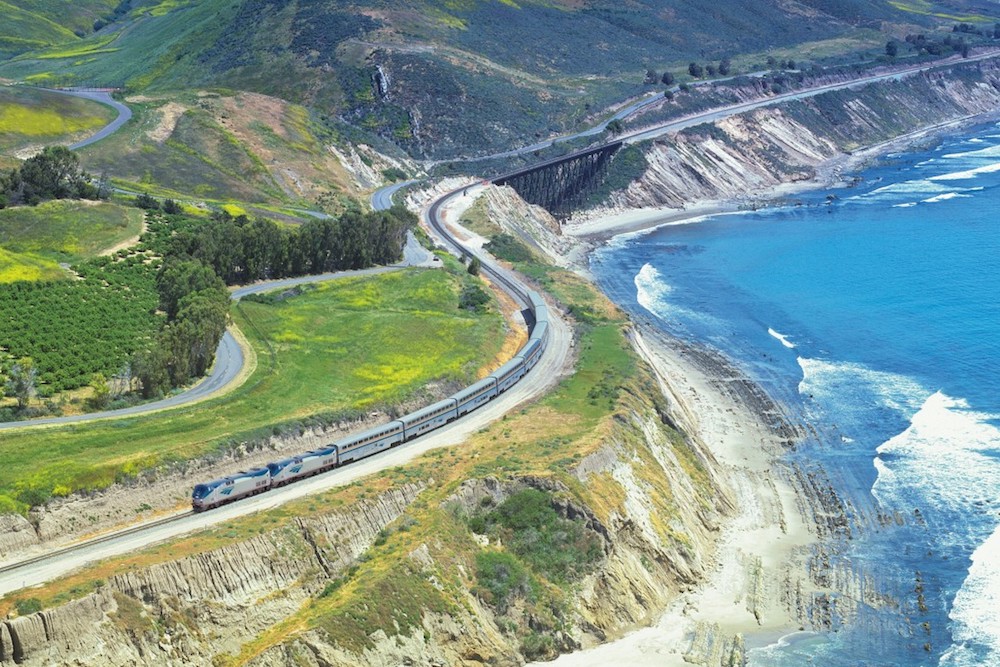 An Amtrak Pacific Surfliner train along the coast. Photo courtesy of Amtrak.

If any of the conventional wisdom about trains in California is true—that no one ever rides them, that Californians prefer to drive or fly, and that high-speed rail or other train projects are “boondoggles” or “trains to nowhere”—then how do you explain the public humiliation of my wife?

Not long ago, my whole family—my beloved, myself, and the Three Stooges (our boys, ages nine, seven, and four)—were on Amtrak returning to L.A. from San Diego, when an announcement came over the train sound system.

Mrs. Mathews, sitting across from me, was unhappy at the scolding. And then, in a turn of reflexive scapegoating that has become all too common in our polarized nation, she looked for someone to blame.

That someone was me.

Her accusation—that this was my fault—was based on an overly limited reading of the facts. True, she hadn’t been the one to let our two older children go to the café car; I had been in charge of them when they went in that direction.

But her theory of the case omitted the larger context that both absolves me and puts the lie to the idea that Californians are train-phobic.

The Pacific Surfliner that day was not merely crowded. It was mobbed: Every single seat was taken and people were standing in the aisles. Even the stairwells between the two levels of the double-deck cars were crammed with passengers.

So when I took those two hungry boys in the direction of the café car, which was two cars back from our seats, we only managed to go about 50 feet before the crowding got so thick I could no longer squeeze through. The boys are very skinny and begged to be allowed to go on by themselves. I asked them not to go, but they disappeared anyway into the scrum of humanity, beginning what would become a memorable adventure.

Our story may be singular, but the situation is not. Crammed Amtrak trains are commonplace in California. It turns out that many millions of my fellow Californians share a secret: They love to ride trains between our state’s cities.

California is now home to three of the busiest intercity train lines outside the Northeast Corridor of the United States. The Pacific Surfliner service on which we were riding that fateful day has three million riders annually on trains from San Luis Obispo down to San Diego; it’s America second busiest passenger rail corridor.

Two others are in the top ten. The Capitol Corridor, running from San Jose to Sacramento’s Capital Region, has more than 1.6 million annual riders (and recently added a new Fairfield-Vacaville station). And the San Joaquins—serving many of the Central Valley cities that, high-speed rail opponents claim, have no taste for rail—boasts more than 1.1 million annually. Ridership on these lines, which are subsidized by the state, is not only high, it’s growing.

If all of this seems like news to you, it’s because train deniers—who insist that Californians don’t care for train travel—have dominated the public conversation in the state, especially when it comes to high-speed rail.

Amtrak has quietly become a vital part of life in the Golden State. In addition to those three train lines, it has four national lines that run through the state. It operates Metrolink commuter rail service in Southern California, runs maintenance facilities in Oakland and L.A., and bases one of its two major reservation centers in Riverside.

Today three stations—Los Angeles, Sacramento, and San Diego—are among the 10 busiest train stations in the Amtrak system. All told, Amtrak has 70 inter-city trains (plus 100 commuter rail trains) operating daily in California. Altogether, they carry 12 million riders in California each year. That’s roughly half the passengers that Southwest Airlines boards annually at California airports.

Amtrak officials would like to accommodate even more of us, but the amount of train service they can offer is limited in large part by a lack of infrastructure. Many stretches of California have only a single track—notably in southern Orange County—so two trains can’t be moving in opposite directions at the same time. In addition, Amtrak often shares tracks with other train traffic—commuter rail or freight—limiting service.

“We cannot add service fast enough in California,” an Amtrak spokesman told me.

Things are jammed enough that Amtrak publishes guidance on its website on how to avoid crowding. Among the advice issued for the Pacific Surfliner: avoid riding on Fridays and Sundays, when trains are especially crowded. And try to travel midday, rather than on busier mornings and evenings. It also helps to choose one of the 500-series trains that have a more limited run rather than the more crowded 700-series trains that go all the way from San Luis Obispo to San Diego.

If all of this seems like news to you, it’s because train deniers—who insist that Californians don’t care for train travel—have dominated the public conversation in the state, especially when it comes to high-speed rail. Perhaps they should buy a ticket and squeeze onboard. Because the sardine-like state of Amtrak California suggests that high-speed rail would be hugely popular.

Studies in other countries suggest that high-speed rail would also attract new riders to the service. Some of those would be people who currently drive or fly between cities. And some would be people inspired to take trips they otherwise wouldn’t. And why not? Riding trains in California offers unsurpassed beauty. Take the Capitol Corridor across the Delta some misty morning, or peer across the Valley floor and up at the Sierra along the San Joaquins. Over the holidays, I was on a Pacific Surfliner along the Santa Barbara and Ventura County coast just as the sun set over the Channel Islands. Even the off-shore oil platforms looked beautiful.

Amtrak is far from perfect; the inside of the cars could be cleaner, the trains are slow, the Wi-Fi is unsteady, and then there are those crowds. But that argues for more rail infrastructure, not less.

After her public shaming, Mrs. Mathews ordered me to retrieve her two older children from the café car. But try as I might, I couldn’t physically break through the crowds of passengers standing in the aisles and stairwells. I couldn’t even contact a conductor until I started climbing on top of armrests and over seats, eventually reaching a business-class car, where people pay extra to guarantee a seat.

A conductor there tried to clear a path through the crowds, too, but they were too thick. So he radioed to the café car that we would wait until the next stop, where I could get off the train and then re-board directly into the café car. (My children communicated over the radio that I shouldn’t hurry—they were having a great time).

I asked the conductor how often the train was this crowded; he said this was standard for evening trains on weekends. And on late summer weekends, when there is horse racing at Del Mar, things are even more jammed, he said.

The next station was only 10 minutes away, but then the train stopped because we were approaching a stretch of single track, where we waited for two trains to pass before us. After all that, it was a half-hour before we got to the station and I could get to the boys, who I found covered in chocolate chip cookie crumbs. From there, with a conductor’s assistance, we got back off the train again and sprinted up to board at the car where my wife and their little brother were. It took us five minutes to navigate the 40 feet to their seats.