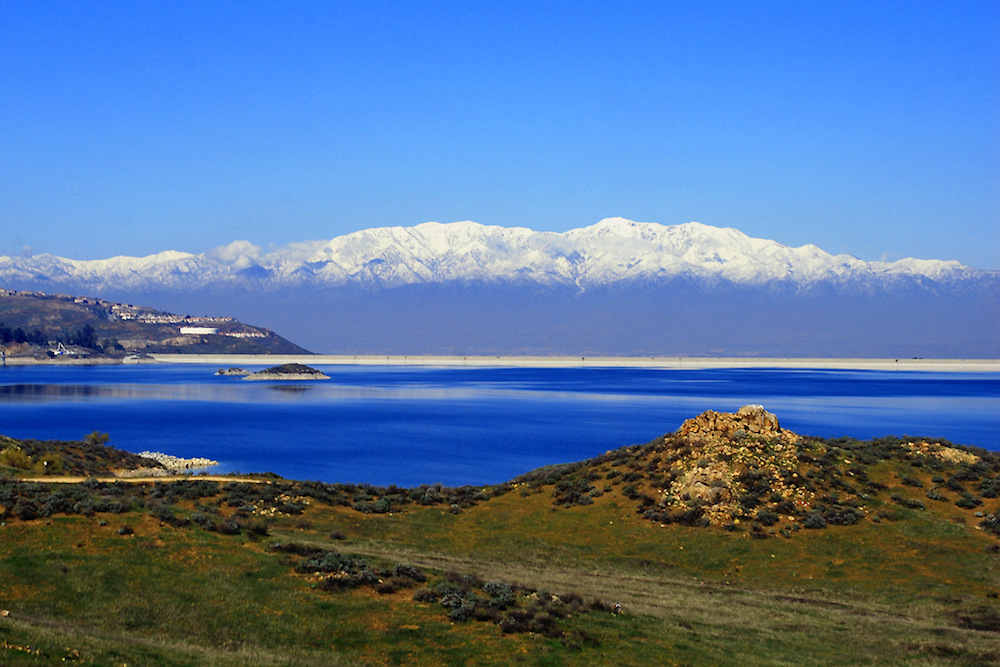 Stay away from my lake, Californians.

It’s too beautiful, and too important, for the likes of you.

It’s true that, as a legal matter, I don’t own Lake Mathews. But I’ve always felt a special kinship with a Riverside County reservoir that spells our mutual name the correct way, with just one “t.” And, what’s more, Lake Mathews serves as the beating heart of the system that supplies water for me and millions of my fellow Southern Californians.

Lake Mathews represents an end and a beginning. It’s both the terminus of the 242-mile aqueduct that sends water from the Colorado River at Lake Havasu, and a distribution center, sending that water, via gravity, from its elevation of 1,500 feet, around the region.

Most intriguingly, it’s a singularly forbidden place. All over California, rivers, canals, and reservoirs double as sites for recreation and leisure. But not Lake Mathews. It’s completely fenced off, and decades of efforts in Riverside to secure public access have been denied by its owner and operator, the Metropolitan Water District of Southern California.

In an era when seemingly every body of water inspires plans for public access or development or both, Lake Mathews retains a special mystique. My lake is like an old-time movie star—deliberately unknowable. And that’s probably the way it should remain.

The special status of Lake Mathews is the product of its history. The area, known as Cajalco Canyon, was little but orchards when the Met identified it as the perfect elevated spot to build a reservoir for Colorado River water that could then flow downhill into Southern California. But one landowner, who believed the property contained tin that would make him and his heirs rich, waged an epic legal fight against eminent domain. The Met eventually secured the land—completing a dam and intake structure in 1939 and starting water deliveries in 1941—but the effort it required is one reason why the Water District has been unwilling to share its hard-won lake with the public.

That tough stance embodies the lake’s namesake, William Burgess “Billy” Mathews, who, with contemporaries William Mulholland and Ezra Scattergood, fathered the water and power of modern L.A. (While Billy doesn’t show up in my Mathews family genealogy, L.A. history is malleable enough for me to claim him.) After arriving from Ohio in 1889, Mathews was elected city attorney in L.A. in 1900, served as general counsel of the Los Angeles Department of Water and Power from 1909 to 1929 (doing the legal dirty work that secured Owens Valley water), and then quietly obtained Colorado River water and formed the Metropolitan Water District—in secretive meetings at the Huntington Hotel in the Pasadena neighborhood where I later grew up. But he died in 1931, as the project that would bear his name was just getting underway.

With the goals of preventing contamination and protecting water quality, the Met has repeatedly fortified Lake Mathews—both by adding to its capacity and by buying up the surrounding land to prevent surging Inland Empire development from getting too close. The lake got further protection in 1982 with the establishment of Lake Mathews and the area around it as a nature reserve; expanded in 1995, the reserve, jointly managed by the Met and county, state, and federal agencies, protects habitat for some 65 plant and animal species, including bald eagles.

While other reservoirs in the region—Lake Perris, Lake Skinner, Diamond Valley Lake—were opened for recreation in some forms, Lake Mathews has remained off limits. Not even Hollywood has managed to convince the Met to give it access for filming: the 1953 film Fair Wind to Java sought to turn Mathews into the Indian Ocean, but had to use Mono Lake instead. Riverside County and the city of Riverside have been seeking public access since 1960. The idea remains popular and talked about in the area. But the Met hasn’t budged.

My lake is like an old time movie star—deliberately unknowable. And that’s probably the way it should remain.

Former Riverside Mayor Ron Loveridge says the city probably made a mistake in failing to annex Lake Mathews back in the 1960s, which would have provided local leverage for public access. “We didn’t do that, and probably should have—might have been a different story,” he said. “I don’t know why Lake Mathews is any different than other lakes, but it is.”

In 2012, local assemblyman Kevin Jeffries introduced state legislation to open the lake. Jeffries told me then that the Met had slapped down his effort forcefully. Even if it passed, the legal protections against public access appeared bulletproof.

Other waterways in California have very limited public access, too—for example, there are limits on access to Hetch Hetchy, the Yosemite-adjacent valley that provides San Francisco with water. But there is something especially pristine about Lake Mathews. “A lot of times you have to make compromises and tradeoffs,” says Jeffrey Kightlinger, the general manager of the Met, and allow hiking or other public uses of a reservoir. But why should the Met do it at Lake Mathews, where it doesn’t have to?

Recently at the lake, a couple miles off the 15 as it makes its way down to San Diego, I drove around the fenced-off shoreline, and then got out and walked for a couple miles. Despite the posted warnings against trespassing, it felt idyllic, the water deeply blue, and birds chirping everywhere. In the lake, the fish, unmolested by visiting humans, grow so big that they are sometimes removed and used to seed other waterways where the public can fish.

The Met offered me a chance to get inside the fence and get a tour. But I declined. It seemed wrong to intrude on a place that, because it belongs so profoundly to California, doesn’t really belong to any of us.