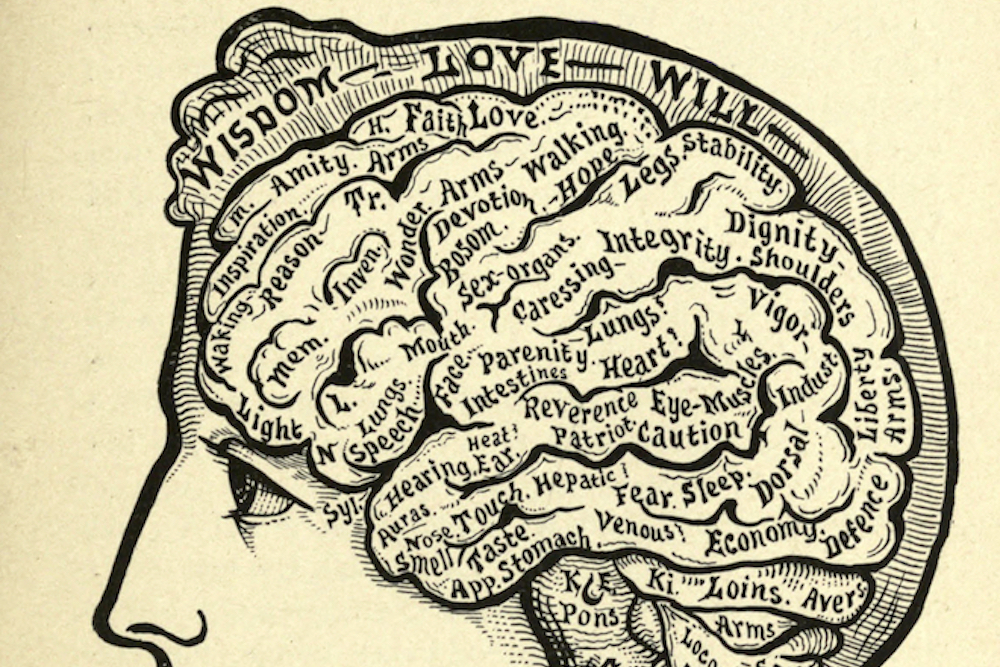 Illustration from The Book of Life: The Spiritual and Physical Constitution of Man, by Dr Alesha Sivartha, published in 1898. Image courtesy of the California Digital Library.

Many students of the mind have observed that consciousness—as a word or as a concept—is a placeholder, a suitcase word for multiple processes in our brains. Those processes are systems in our brains that are made of physical matter; they chug away, following physical laws, to generate our felt state, our subjective sense of life. And somehow, in the entirety of their collective actions, we are aware, we feel, we love, we sit on the porch in the evening and enjoy the sunset.

Some say the gap—between nerve cells and life, the brain and the mind, objective reality and the subjective—will never be understood, because such understanding is beyond our human capacity. But I think it is possible to answer the question of how the brain becomes the mind. We just need to change our thinking.

Right now, we are stuck—at a place and time in human history—where scientists and other serious people accept that the physical brain, following all the laws of mother nature, gins up this wonderful thing called consciousness and its particular brand of sweetness in humans. Scientists also realize the brain has evolved over eons to have a gazillion parts, intricately organized to manage certain capacities of life, from seeking food, drink, and shelter, to eating, drinking, and reproducing, which we share with other animals. In addition, humanity has more elaborate thinking and talking capacities. Each process by itself—seeking, eating, reproducing—has been dubbed instinct, because it is in some ways unlearned. And as the great American philosopher and psychologist William James famously observed, humans have more instincts than any other animal.

But none of this actually answers the question of brain-to-mind. In our era, we have the work of the cognitive psychologist Steven Pinker, who famously showed in the 1990s that language was not the mere product of our brain or our human societies. Language was an instinct, literally a piece of our brains, and thus part of the very human machine itself.

What we call consciousness arises through the moment-to-moment expression of brain modules with hyper-specific functions that are scattered through the brain.

To my way of thinking, each of our sub-systems, modules, or capacities is real and alive because of the particular way that life works. And here I appeal and defer to the lifelong work of an extraordinary scientist little known to neuroscientists and psychologists, Howard Pattee. While Pattee was trained as a physicist at Stanford, he has spent his academic life at State University of New York, Binghamton as a theoretical biologist. Pattee proposes a different way to think about that pesky gap between neurons and mind. And to do it, he takes us all the way back to a prior question: How does life arise from non-life? Hold your hat. The next bit requires more thinking.

But life has gone a step beyond simple replication; it is evolvable. And the mathematician and physicist John von Newmann understood that to evolve, the process has to introduce variation so that natural selection can begin its work, and variation had to come from a code, an abstract, reliable representation of the instructions.

Right there is where Pattee stumbles upon a brilliant truth. While the substrate of the code is a physical structure, the code itself is made up of abstract symbols that have been selected for their reliability (and can change if a more reliable one pops up). Symbols are subjective, and as such, follow no physical laws; they follow rules. Thus, the gap between non-life and life is bridged by an abstract but physical code, a substance. There is no spook or magic in the system; it is simply that every code requires a complementarity between its two aspects: the physical and the symbolic.

While the original substance that seeded life is unknown, we now think of it as DNA. And DNA is a perfect example of the phenomenon that Pattee describes: DNA follows the laws of physics and generates proteins by following the coded recipe—and DNA exists physically. Yet the code for the recipe, though conserved and stable, is abstract and not subject to physical laws.

Likewise, the gap between neurons and mind is bridged by a symbolic neural code and that code also requires a complementarity between its two aspects: the physical and the symbolic. Subjective consciousness is not a “thing,” though physical neurons produce it. It is the result of a process embedded in an architecture, just as a democracy is not a thing but the result of a process.

What we call consciousness arises through the moment-to-moment expression of brain modules with hyper-specific functions that are scattered through the brain. As those modules each come forward through time, they create the “flow” of consciousness, which is both a process and a sensation.