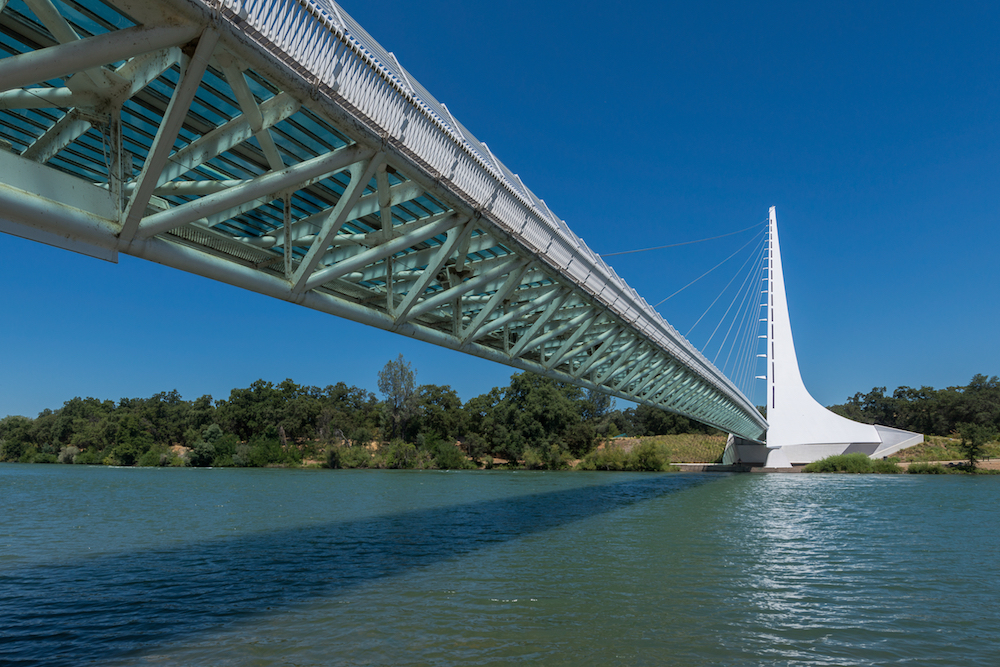 The Sundial Bridge in Redding, California. Photo courtesy of Shutterstock.

If you love California and haven’t figured out where to go for summer vacation, here’s a suggestion: Go north!

You could, for example, go to Redding. Sure, the city of 92,000 at the northern end of the Sacramento Valley probably isn’t high on your list of preferred destinations. But the pleasures are all the more intriguing for being less known.

Redding and its region, the Northstate, are crucial—spectacularly so— to understanding how California really works. The Northstate is at once more tied to the state (with cities and local governments so small that state government agencies like Cal Fire and the Department of Fish and Wildlife play an outsized role), and more removed from the rest of us (the region lacks major airports).

As a vacation spot, the region has practical advantages: It’s cheaper and less crowded than the beaches, and cooler than the deserts. And while the drive north is long—10 hours from Southern California—you can stop along the way for olive tasting in Corning, the Thursday night farmers market in Chico, or pizzas and salads at Granzella’s Restaurant in Williams, in Colusa County, where Gov. Jerry Brown plans to retire.

Is there really anything to do once you reach Redding? You bet. For starters, you can visit California’s greatest 21st-century structure, the Sundial Bridge.

Sure, the Golden Gate Bridge and Big Sur’s Bixby Bridge might be more beautiful, but the Sundial, which opened in 2004, combines a stunning look with technological magic. Part of the 710-foot-long span’s appeal lies in the design by the world’s leading architect of bridges, the Spaniard Santiago Calatrava, who created what he says resembles a “goose in flight.” The glass-decked bridge has a 217-foot-tall pylon that, via cables, holds up the structure while also casting a shadow that makes it a sundial. The bridge is an original, though it’s sometimes compared to Calatrava’s Puente del Alamillo, in Seville.

Another dimension of its power comes from its setting: It spans California’s grandest and most important river, the Sacramento, at a spot 300 miles upriver from where it flows into San Pablo Bay. The bridge crosses the river without touching the water, leaving migrating salmon undisturbed.

Some tight-fisted locals still grumble over construction delays and the $24 million price tag, which covered the creation of new software to conduct the calculations for its unusual design. But the span is already an icon, connecting Redding’s robust network of trails and providing another amenity for Turtle Bay, Redding’s 300-acre, education-oriented park, with a museum and arboretum.

The bridge has another virtue: proximity, via a short drive or longer bike ride along the Sacramento River Trail, to California’s most beautiful waterwork.

The Shasta Dam creates our state’s biggest reservoir, and it’s in the news for the controversy over whether to raise it to store even more water. But the dam itself is also a place of unsurpassed beauty, especially at and after sunset, when it is lit up. At all hours, people gather on top of the dam to run, bike, or just sit and admire the magisterial view it provides of the valley.

When I visited one recent evening, I was greeted by nearly the entire graduating class of U-Prep, which is what Redding calls University Preparatory School, a top California charter school. They were flirting, reminiscing, and saying their goodbyes at a place they find utterly familiar. A couple of the teenagers gave me a brief tour during which they recited the dam’s particulars—it’s the eighth-tallest dam in the United States. The dam, holding the water upon which the state relies, feels like California’s front door, the place where our state really begins.

After seeing the dam, you could stick around Redding to see a show at the Cascade Theatre, an Art Deco marvel downtown. But a warning— Redding is very hot in summer so it’s best to head out of town into the nearby mountains (provided there are no big fires in your path).

To see more of the water that distinguishes the area, you might kayak near Whiskeytown or you could drive up to McArthur-Burney Falls, a state park. People in town also might suggest you go to hell—which is friendly advice in these parts. Bumpass Hell in Lassen Volcanic National Park is a one-of-a-kind geothermal site, with boiling springs, fumaroles, and mudpots. Unfortunately, the trail to this particular hell is closed for renovations this year.

Redding and its region, the Northstate, are crucial—spectacularly so—to understanding how California really works.

But if your time is limited, skip Lassen and drive north from Redding up to our state’s most mystical peak, Mount Shasta. This 14,180-foot volcano, sleeping before it erupts again, is a true California emblem—volatile, stunning, rising so dramatically that it doesn’t quite seem to fit the landscape, or the earth.

“When I first caught sight of it (Mount Shasta) over the braided folds of the Sacramento Valley,” John Muir famously wrote in 1874, “I was fifty miles away and afoot, alone and weary. Yet all my blood turned to wine, and I have not been weary since.” Teddy Roosevelt echoed that in 1908: “I consider the evening twilight on Mount Shasta one of the grandest sights I have ever witnessed.”

While it’s possible to put crampons on your hiking boots to visit Shasta’s glaciers or—if you have money—take a helicopter flight around it, I prefer to commune with the mountain from Lake Siskiyou, where there are chalets you can rent from the Mount Shasta Resort, a decidedly unpretentious place. Its original developer, John Fryer, is also an inventor. He introduced me to a new alternative form of golf he dreamed up—Whing Golf, where instead of having to use a set of golf clubs, you can throw all your shots using a patented club, the whinger, inspired in part by a jai-alai cesta. The game is fun and fast, and a round of Whing Golf at the resort course, cart included, is just $16.

“The power of the mountain is you can see it from everywhere,” Fryer told me as we admired Mt. Shasta on the course. “It’s spiritual.”

From the resort, it’s a short drive to the city of Weed, which was named for local lumber mill founder Abner Weed, not the Northstate’s most high-profile and newly legal product. It also has my favorite city motto: “Weed like to welcome you.”

From there, head north into Yreka, where you can encounter an ancient form of political resistance (or fantasy, depending on your perspective). Yreka, population 7,600, is the unofficial capital of the quixotic decades-long effort to turn this part of California into its own state, to be called Jefferson.

In Yreka’s downtown, you’ll understand the nod to separation. State cars and trucks are common here. Many people I met work for state agencies, and thus know better than city slickers our state government’s many failings. Familiarity breeds contempt.

But the region is effectively subsidized by the rest of the state, so breaking away would be fiscally disastrous.

Still, if you folks in the Northstate really want to secede, I’m OK with it, on three conditions. First, that you don’t take all our water with you. Second, that you agree to link your statehood bid with Puerto Rico’s own campaign for statehood, to give the disaster-decimated island more power and to preserve political balance (given Jefferson’s Republican proclivities and the island’s Democratic nature).

And, third and most important, that you don’t put up any barriers to prevent Californians from visiting as often as we like.