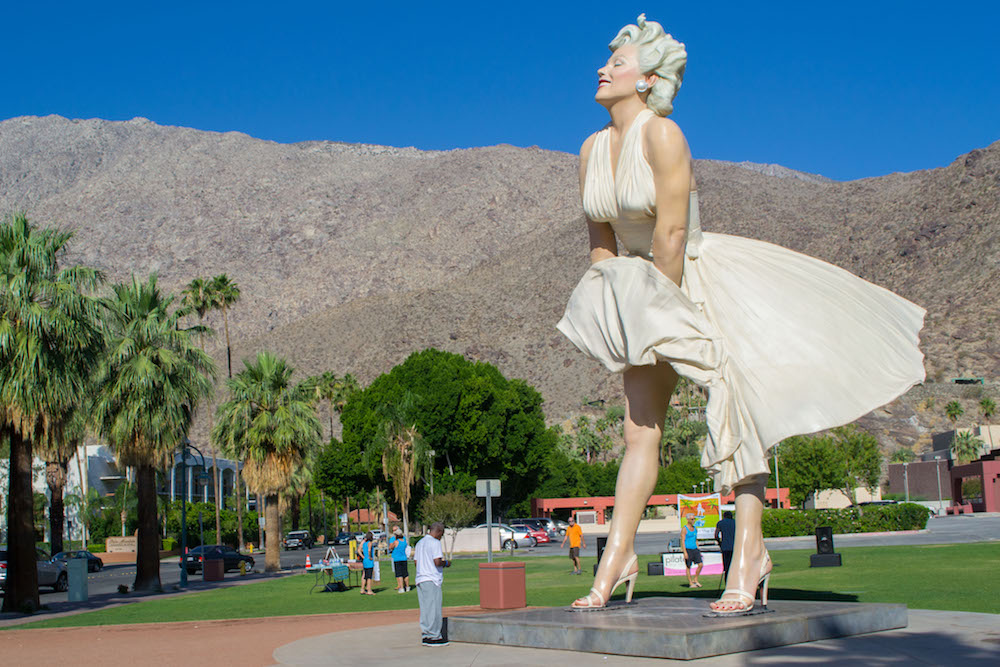 California’s self-image is all about bigness, as with this giant statue of Marilyn Monroe formerly in Palm Springs. But what if the Golden State starts to shrink? Courtesy of Wikimedia Commons.

This should be the summer when the population of California finally surpasses 40 million.

We should celebrate by reflecting on just how small we are.

Of course, we won’t. California, like an insecure male lover, is always bragging about how big it is. And so reaching the 40 million threshold—there is no red-letter date, though, by state figures, it’s likely to happen in late summer—will occasion another round of boasting about our size, not merely in population but in economic output and cultural impact. And this moment is likely to produce new predictions—offered either with pride or fear—about how soon we’ll get to 50 million or even 100 million people.

Such projections of massive growth may be fun, but they will likely prove to be exaggerated. To the contrary, this is the moment to consider the very real possibility that California’s rapid population growth is over—and that shrinkage may be in our future.

The very factors that have produced population declines in other places are now strong trends in California. Our birth rate has fallen to a record low—even lower than during the depths of the Great Depression. Also, we’re now three decades into a serious out-migration of California residents, with the Golden State losing about one million more people per decade than it takes in from the rest of the United States.

International immigration won’t save us—it’s at near-historic lows and is likely to fall further as the federal government continues its systematic harassment and mass deportation of immigrants. And the Trump administration’s destructive trade war is already hurting our globally oriented economy, eliminating jobs that draw and keep people here.

Which may be by design. The state’s ascendant environmental groups see population control as crucial to reducing pollution and fighting climate change. Indeed, such policies are self-reinforcing, creating a negative population spiral.

As the number of children declines and young people leave California, the state is aging rapidly. San Francisco now has the lowest proportion of children (13 percent) of any major U.S. city. Aging populations tend to be less supportive of the very things that boost population: immigration and taxes to pay for child development. And, economically, aging populations consume less and innovate less (most new things are invented by the young), making their economies smaller and reducing the number of jobs.

Unfortunately, population also could suffer via disasters that no longer seem so unlikely—from nuclear war to huge firestorms fueled by climate change.

If you’re sitting in bumper-to-bumper traffic on the 405, you may be reading this skeptically, wondering, “Why am I stuck behind all these cars if the population growth is so low?”

My answer is, first, you should put down your phone while you’re driving—it’s not safe, and California can’t afford to lose you. Second, you should consider the numbers: California’s population growth is at record lows—less than 0.8 percent annually—and falling. During the heyday of immigration in the 1980s, annual population growth was 2.5 percent a year.

Indeed, with many other states growing faster than the Golden State, in 2022 California could lose a seat in the House of Representatives for the first time. The likelihood of such a loss increases if the Trump Administration succeeds in politicizing the census and undercounting California’s racial and ethnic minorities.

California would hardly be alone if its population started to decline. Illinois and Pennsylvania have seen their populations drop in some recent years. And the most recent population report from the United Nations says that 51 countries are expected to see population decreases between now and 2050, including European countries that inspire our state’s social policies, like Germany. In Asia, Japan’s population already is in decline; now at 127 million, its government has declared a goal of limiting losses so that the total doesn’t fall below 100 million. Even China, once a feared “population bomb,” and long a source of immigrants to California, is expected to see a 2.5 percent decline in its population by 2050.

The very factors that have produced population declines in other places are now strong trends in California.

Despite the warning signs, the prospect of population loss hasn’t penetrated the California mind. Instead, we remain devoted to the great California pastime of overestimating our own population growth. One big offender, Gov. Jerry Brown, talks about reaching 50 million as a fait accompli that could threaten the environment, urging Californians “to find a more elegant way of relating to material things.”

But, out of sight, number crunchers at the state’s think tanks and government bureaus have been ratcheting down California’s population estimates. As recently as the mid-1990s, the state and federal governments’ official predictions showed California reaching 50 million people by 2020, a year when our real population likely will be fewer than 41 million.

And if we never get much beyond 40 million, will it be a mortal wound to our pride? After all, the United States hasn’t had that low a population since 1872, which was when the newspaper man Horace Greeley, famous for the advice “Go West, young man, and grow up with the country,” ran for president, lost, and promptly dropped dead.

This California, of 40 million, faces a choice. Either accept that, instead of the colossus of our boastful imaginings, we’re a small place that’s likely to become smaller—at least compared to a world that is growing faster than we are. Or think more seriously about how to attract more people here from other states and countries, and better nurture and retain the young people we have here now.

If we’re as big as we think we are, this is no time to think small.