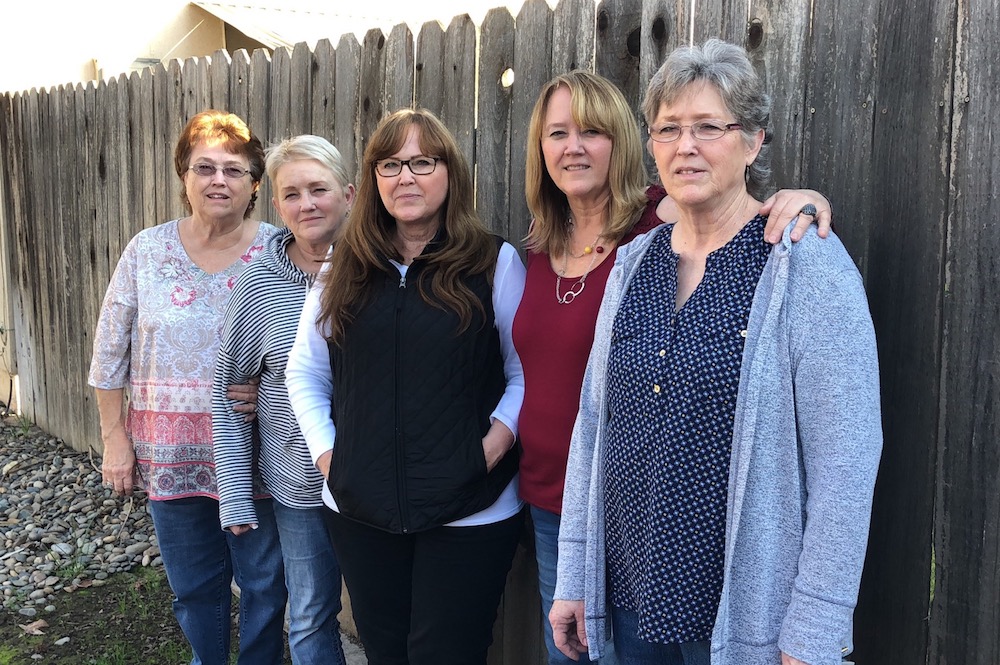 The Modesto Girls, “pillars of an improbably strong family,” from left to right: Carol, Corina, Carla, Colleen, and Cathy. Courtesy of Joe Mathews.

California changes too fast. The new so quickly replaces the old. People come and go with a blur. I often feel like you can’t count on anything staying here anymore.

But you can count on the Modesto Girls.

These five sisters—my first cousins, once removed—have never had glamorous jobs. They didn’t get fancy educations. Little in life has come easy to them.

But they are always there when there’s work to be done, when my mom’s side of the family is in need, or just when you happen to need them. They are the people who come over to your house—and before you know it they’ve cleaned the place and cooked you a meal.

This California era is a time of out-migration, with more people departing California than coming into it. Much of my big extended California family has slowly melted away to Oregon, Washington, Nevada, or the Arizona side of the Colorado River. My Uncle Jerry even returned to Okemah, Oklahoma, from which his grandparents and parents fled during the Dust Bowl era.

But the Modesto Girls stay in Modesto.

As a matter of age, the Modesto Girls—that’s what the Southern California parts of the family call them—aren’t girls anymore. Indeed, they are the pillars of an improbably strong and large California family. And they remind me—through their example—that for all of California’s progressivism, the traditional clichés about faith and family remain at the heart of our life, at least in Stanislaus County.

Because their names are so similar, I often get them confused, so let’s see if I finally can keep them straight, at least for the purposes of this column.

Cathy, 69, built a family of four boys, 10 grandchildren, and five great-grandchildren, while working at flower shops and the Frito-Lay plant.

Carol, 66, who works as a caregiver, has four children and six grandchildren.

Corina, 63, a caregiver and bus driver, has three children and 19 grandchildren.

Carla, 61, a school bus driver for 25 years, has two daughters and two granddaughters.

Colleen, the baby, at 57, has three kids and seven grandchildren, and has worked in the health club business for years.

And that doesn’t count their five brothers, who I will get to very soon, I promise.

The endurance of the Modesto Girls might be a miracle. Their upbringing was rough. Their parents, my Great Uncle Shelby and my Great Aunt Doris, were Okies who first came to Southern California as children. Family lore says that a judge in San Bernardino County gave Shelby, then 17 and accused of a store robbery, a choice of jail or marriage to Doris, then 15. He chose the latter.

They quickly started their family of 10 children, but life with Shelby, an alcoholic, was never stable. The family moved out of the Inland Empire and up to Modesto ostensibly because there was plenty of truck-driving work there, and because Shelby liked the peace and fishing of Tuolumne River. The real reason was that to put some distance between Shelby and trouble. He even adopted a new nickname, Jack, which he once instructed me to use in the event there were any sheriffs around.

Modesto couldn’t cure Shelby. He moved the family 17 times, mostly around the unincorporated parts of west Modesto. He continued to have run-ins with the law. Shelby’s demons fell hardest on the five brothers. Two, the twins Larry and Gary, died young.

But the family persevered. Aunt Doris helped support the family with jobs in the canneries and as a housekeeper at City Hospital. The other three brothers persevered and built strong lives. Wes, a cabinetmaker, has seven children and 11 grandchildren. Mike and Keith have a tree service business together. 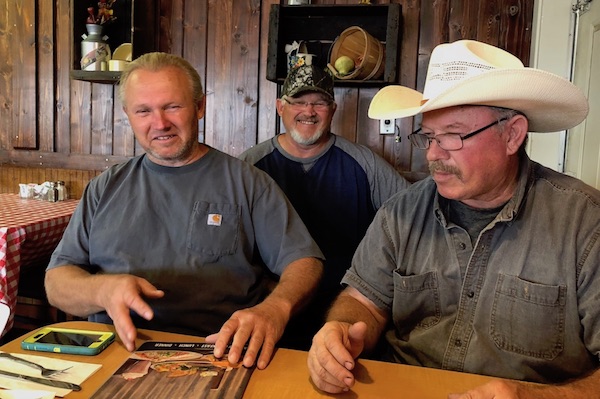 A few siblings left Modesto for a while, but like the swallows who returned to San Juan Capistrano, the Humphreys always fly back to the northern San Joaquin Valley.

“I guess we are pretty unusual,” Carla told me at a recent family reunion. “We’re all in Modesto. We talk to each other every day. We tease each other, and we’re always fighting with each other.”

They also celebrate with each other, play dominoes together, and send their kids and grandkids to some of the same schools. And in a family of caregivers, they take care of each other, quite literally moving into each other’s houses to care for elderly or infirm relatives.

They also worship together.

This is the secret of their survival. The Modesto Girls will tell you that they wouldn’t have gotten through the difficulties of their family and life if they hadn’t become Jehovah’s Witnesses. Their church has connected them to the Bible, to God, and even more deeply to each other.

They knock on doors weekly, and are struck by the poverty and isolation of families in and around Modesto. They also bring their carts, with Jehovah’s-Witness literature, to public places, like the county courthouse downtown. They work together to help with relief after natural disasters. They often travel together—sometimes arguing over who will drive—to church meetings and worship in the Bay Area or Sacramento or elsewhere. Their brothers, their children, and their grandchildren are part of the church.

They describe the church, with witnesses worldwide, as connecting them globally. They’ve been to the East Coast to the headquarters; in fact, their mother, Doris, was only able to see the country later in her life because of trips she made to church headquarters and church events.

The Modesto Girls, as Jehovah’s Witnesses, don’t celebrate national holidays or birthdays, so if we want to see them—and we always do—we hold family reunions. The Modesto Girls inevitably come (their brothers should come more!) making the long drive down to Southern California without complaint. Then, they are the life of the party, offering reports on Modesto (the Gallo Center for the Arts just keeps getting better, they say) and other tales. (I enjoyed some recent ones about an in-law who cleaned the house of the parents of Modesto native and Star Wars creator George Lucas.)

The only thing better than a family reunion with the Modesto Girls is going to Modesto to see them. All you have to do is show up at one of the girls’ homes, and before long their siblings and relatives appear, with stories to share.

When some recent reporting took me to Modesto, I ended up staying the night at Carla’s house, and by breakfast time, two brothers and three of the sisters had assembled at the table, along with big piles of pancakes and bacon. They talked humorously about recent events, and offered wild, half-baked ideas like Keith’s belief that you can cure diabetes through sprinting.

On this morning, they also talked about Uncle Shelby’s penchant for keeping large packs of animals. He once had a flock of turkeys, and later a collection of pigs, who were kept in line by a very mean boar named Big Red. My cousins have strong stomachs—they could eat the bacon even while talking about the time Shelby ordered the pigs slaughtered. The storytelling can feel competitive, as if this were an Olympics for who can tell the most “white trash” tale.

I asked my usual question: Why do you all stay here in Modesto? Economically, it’s not the easy choice: Modesto, despite its geographic proximity to the Bay Area, has been getting poorer; housing prices have yet to return to their pre-recession levels.

Their answer is always the same: The Modesto Girls stay in Modesto because that is where their family is. And is anything more important than that?

Also, quipped Cathy, “Is there any other town that would take us?”