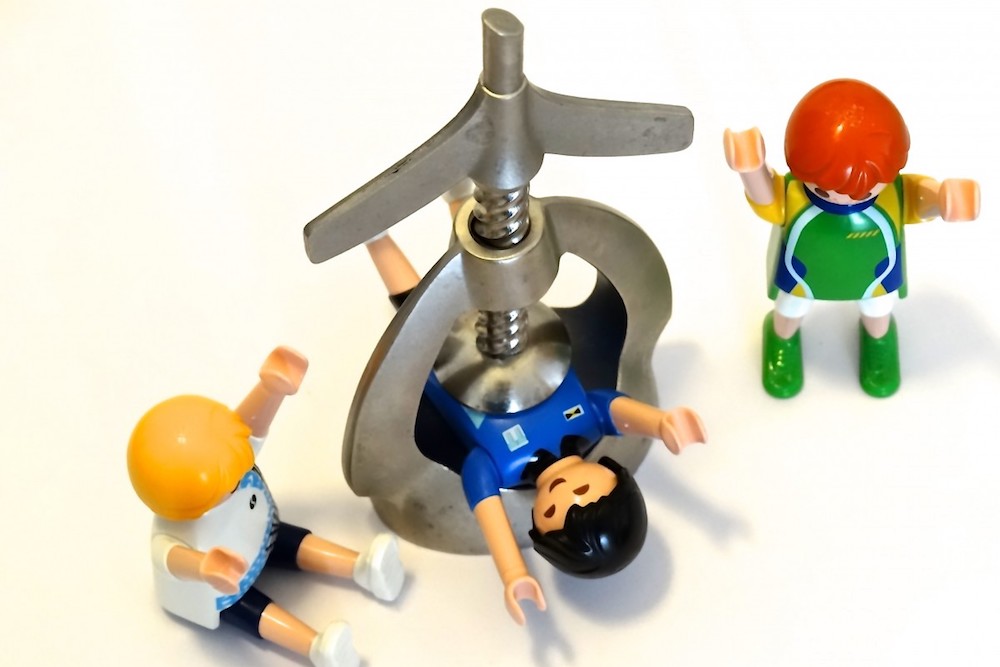 California’s schools—and students—are getting squeezed by a combination of rising pension costs, declining enrollments, and pressure to improve long-term results. Courtesy of PxHere.

Don’t squeeze your kids too hard as you send them off to another school year, because the state of California is already squeezing your kids hard enough to hurt their future.

Call it The Great California School Squeeze. The state is stuck in a nasty school funding paradox: Even though our school districts have never had higher funding levels than they do right now, many districts face financial peril.

Why? Because The Squeeze is a torture machine with three ratchets.

First, escalating payments and obligations for retirement benefits are growing so fast (more than 100 percent in this decade in many districts) that they gobble up most of the rising education funding all by themselves. That leaves little for today’s students and teachers.

Second, with California’s birth rate at a record low, the number of students is stagnant in some districts and declining in others. Since school funding is granted on a per-student basis, fewer students means less funding, even at the higher rates.

But a failure to escape The Squeeze threatens what was once the essence of California: our leadership in knowledge and technology.

For the past half-century, California has been steadily giving away the lead it once held over the rest of the country and the world in education. In 1970, according to a new Chapman University report, Californians were better educated than the average American. The state had a higher percentage of adults with college degrees—and a lower proportion of adults with less than a high school education—than the nation as a whole.

Reversing such trends would be a monumental task for California even in ideal conditions. But in the midst of The Squeeze, it seems impossible. School districts, rather than adding programs, are freezing budgets, laying off teachers, and forcing school closures.

This process may be ugliest in Oakland, where the school board members have publicly declared, “We have too many schools.” What Oakland really has is rising retiree costs and much lower student enrollment, putting the district in danger of returning to state receivership. In Southern California, my hometown of Pasadena has announced plans to close five schools starting next year, including the last two public schools in the neighborhood where I grew up.

The Squeeze also limits California’s instructional hours, despite research showing that more time to learn is essential for making educational gains. We might live in the world’s fifth largest economy, but I’m about to send my youngest child to my local elementary school where he will only have a half-day of kindergarten because that’s all that our state funds.

It’s obvious that California needs to give its schools more. But from where? Today’s kids and teachers are already taking hits from The Squeeze. And even if it were possible to claw back pensions from retired teachers, it wouldn’t be fair. Teachers don’t get Social Security and their pensions are reasonable, averaging just over $50,000. This reflects the Penis Rule of Pension Abuses; scandalously large retirement payouts, like the $1.27 million recently given to L.A.’s police chief, usually come from predominantly male professions like fire and police.

Unfortunately, there is no way to get the money from those most at fault: previous state and local politicians who made retirement promises without properly funding or disclosing them. Much of The Squeeze on California schools today comes from efforts to recover from years of underfunding of pensions by accelerating school districts’ contributions to the two state pension funds that cover school workers and teachers.

What’s most scary about The Squeeze is that it’s likely to get worse. The Squeeze has hit hard even as the stock market has risen and the economy has expanded; a recession and stock market decline would make The Squeeze so bad that school districts could be forced into massive cuts and bankruptcy.

If you’re surprised to be reading all of this, that is by design. School districts often hide the growing size of their retiree obligations deep in budget documents. Many districts ask local voters for additional taxes which delay the reckoning but don’t fix the problem. Diminished local media don’t have resources to cover it. And powerful teachers’ unions have tried to shift blame for The Squeeze to their favorite bogeyman, charter schools, even though they are a small piece of the public school system.

But that doesn’t mean there aren’t any.

Addressing The Squeeze starts with clearer disclosure: making it plain the ways in which retiree costs and enrollment declines are hurting today’s kids and teachers. While retired teachers must have their pensions protected, cost of living adjustments should stop. And districts should stop giving retired teachers separate health benefits; they should rely on the same public programs—Obamacare, Medicaid, and Medicare—that the rest of us do.

The savings from such changes won’t be nearly enough to escape The Squeeze, but they should make it possible to do more for today’s teachers. As David Crane of Govern for California has shown, school districts from San Francisco to Fresno are now devoting less than half of their revenues to compensation for today’s teachers.

But breaking the grip of The Squeeze will require more from California taxpayers—and not just small tax increases on the local level.

The state has two big dysfunctional systems that hurt today’s kids. One is a complex tax system, built around Proposition 13, that protects older homeowners. The other is a complex education funding system, built around Prop 98, that ties education spending to the budget and economy, rather than to students’ needs. It has effectively acted as a cap on education spending since Prop 98 was adopted 30 years ago.

Both systems need replacing. The Prop 98 funding formula should die, and education funding should be tied to educational needs. Doing that would require tens of billions of new dollars each year, which in turn would necessitate a massive tax reform.

Of course, even such difficult and transformational reforms might not be enough for schools, now that state Democrats want to grab new tax dollars for a single-payer universal health care system. That might be a worthy goal. But California first needs to rescue the kids from The Squeeze that’s crushing our single-payer education system.