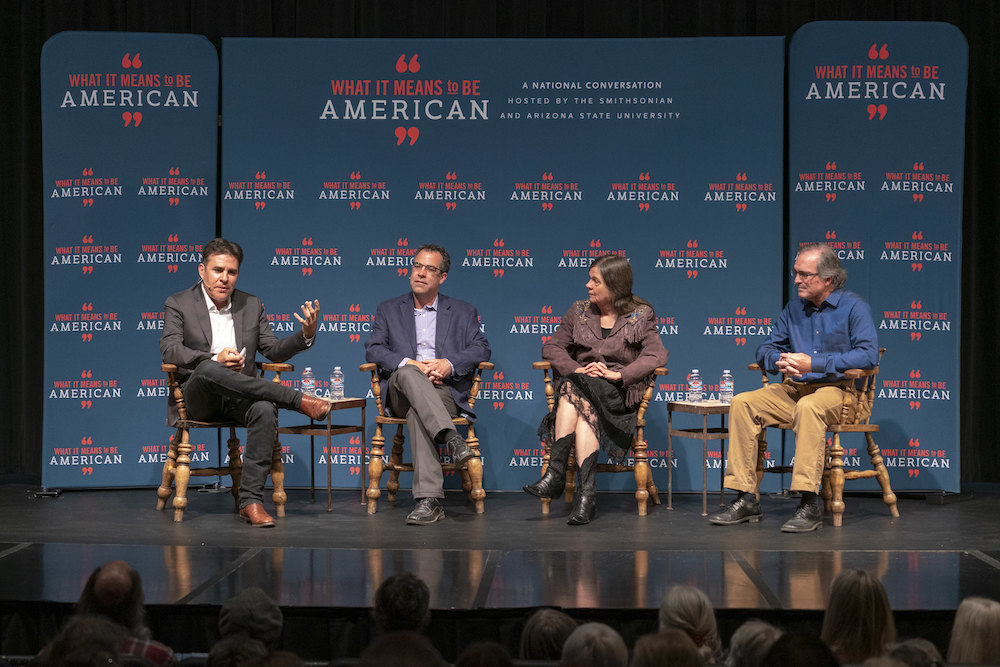 New Mexico has an uneasy and complicated history. After joining the United States by conquest—through the Treaty of Guadalupe Hidalgo that ended the Mexican-American War of 1846-1848—its residents didn’t automatically become citizens until the area gained statehood in 1912. The legacy of this past—which includes Native American settlements that stretch back over a millennium and Spanish colonization in the late 16th century—was the subject of a Smithsonian/ASU “What It Means to Be American” event, titled “How Did the American Conquest of the Southwest Shape New Mexico’s Future?” which took place before a full house at the Taos Center of the Arts in Taos, New Mexico.

Colette LaBouff, who is executive director of the Taos Center of the Arts as well as poetry editor for Zócalo Public Square, and Zócalo Public Square founder and publisher Gregory Rodriguez opened the evening with brief welcoming remarks. Simon Romero, national correspondent for The New York Times, then kicked off the conversation by discussing how New Mexico’s past continues to play out in its present. For example, while a right-wing militia group involved in detaining migrant families at the border was swiftly condemned by New Mexico state officials, this was in sharp contrast to how the states of Arizona and Texas treated similar paramilitary groups. Romero asked the evening’s panelists to explain what makes New Mexico different from its neighbors—particularly in how it approaches interference in its affairs and human rights violations?

University of Colorado historian and Center of the American West faculty director Patricia Limerick started by saying, “It is really lucky for the United States that New Mexico is a part of it.” She urged the rest of the country to look to New Mexico to find “a world of richness and complexity,” manifested in the state’s population that includes diverse groups of Native Americans, Mexican-Americans, and Mexican immigrants “with different layers of arrival,” Limerick said. This complexity resists simple-minded analysis and the state’s social intricacy makes it a place “where you have to keep thinking,” as well as a “hazardous zone for simple categories.”

Throughout the evening, the theme and effects of conquest were never far from the panelists’ minds. New Mexico Historical Review editor Durwood Ball said that while the Mexican surrender of New Mexico, which took place in 1846 during the Mexican-American War, is described as a “bloodless conquest,” the real war came afterward. And while we recognize the seven or eight U.S. soldiers who were killed in the 1847 Taos Revolt in response to the surrender, we don’t often talk about the 150 Hispanos and Pueblos who were killed when U.S. forces breached a wall in the church in Taos Pueblo where they had taken refuge. “Make no mistake,” Ball said, “there was a nasty, nasty war.”

And it was only after conquest that the area’s borders were drawn. Limerick said that the drawing of lines seems like a dull matter, but in fact “it’s an amazing act of human exaggeration.” In order to master a place, a conqueror needs to create borders. In the case of New Mexico, this meant making the territory smaller and cutting it into pieces that were easier to govern, which, for example, led to the creation of the Arizona territory.

But why did it take over half a century for New Mexico to be admitted into the Union? One reason, Limerick believes, is that the U.S. thought bringing New Mexico into the nation would bring “too many ‘dark people.’” It wasn’t until what she described as, “forty years of tutelage, of bringing the ‘dark people up’ to standards,” that President Theodore Roosevelt advocated for New Mexico at the beginning of the 20th century—a campaign that eventually resulted in statehood in 1912.

After New Mexico became a state, the effects of New Mexico’s past didn’t simply vanish, but became an intrinsic part of New Mexican identity. Romero pointed back in history to another defining uprising—the Pueblo Revolt of 1680—when the indigenous Pueblos expelled the Spanish colonizers for more than a decade.

Pablo Mitchell, Oberlin College historian and author of Coyote Nation, described the revolt as an “incredibly successful revolution.” And even though the Spanish came back, the missionaries no longer went out to the pueblos, which Mitchell said held the Spanish off “from coming into their villages and trying to transform them, often in violent ways.” Mitchell said it is this legacy—“of Native people holding onto their land, holding onto their autonomy within different pueblos in New Mexico,”—which is different than what happened in other parts of the country and continues to resonate in the state today.

New Mexican identity was—and still remains—an untidy concept. Ball explained that the racial complexity of the Hispanos, Native Americans, and Anglos was “beyond anything the United States could manage.” After all, many of these people were of Mexican descent, which posed a real problem for the United States. From the beginning, Ball said, “Nuevo Mexicanos resisted white supremacy” and considered themselves “involuntary citizens of the United States.” While the state is politically incorporated with the U.S., Ball said that socially and culturally it is not. New Mexico, Ball explained, “is an incomplete project of our government, and it makes our president crazy.”

As New Mexican identity evolved over time, many present-day New Mexicans are of mixed Hispanic, Anglo, and Native heritage. Intermarriage has long been a part of New Mexican’s history, and while some marriages might have been for love, intermarriage was often strategic—on the part of both Anglos and Hispanos—who saw the monetary benefit in having a son or daughter-in-law who could give the family access to new business opportunities. This notion of “money as a motive” to promote “more open encounters of people,” Limerick said, was ultimately positive because of the dynamic culture that it created.

Limerick closed the discussion with a story about a U.S. soldier, James Byrne, whom she “carries a torch for.” In the late 19th century, Byrne was visiting Santa Fe, and he asked for directions in English. When the people he asked only responded to him in Spanish, Byrne was frustrated. But, Limerick said, he wrote in his memoir that it “suddenly occurred to [him] this was their country.”

In response to a question from the audience about the spirit of resistance in New Mexico among both Native Americans and Hispanos, the panel started to discuss the state’s history of seeing itself in opposition to both nearby Texas and to American practices like slavery, which Mexico abolished in 1824. “Resistance occurs on all different levels,” Mitchell summed up, and historians need to be alert for signs of what’s going on beneath the surface. Mentioning local Taos Navajo artist R.C. Gorman, he said we need to dig more deeply—“How do we start to think about art differently when we start looking at it through a lens of resistance and endurance?” 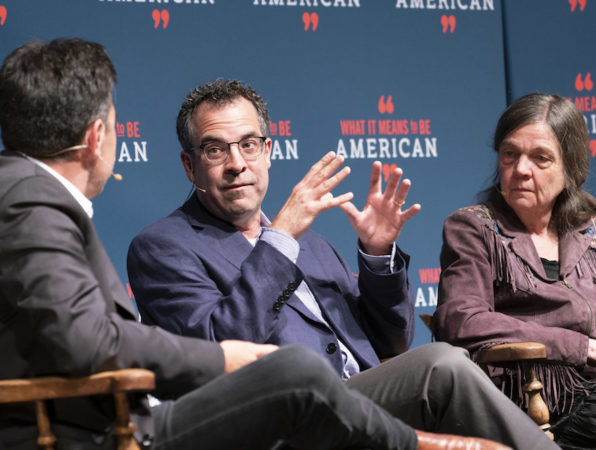 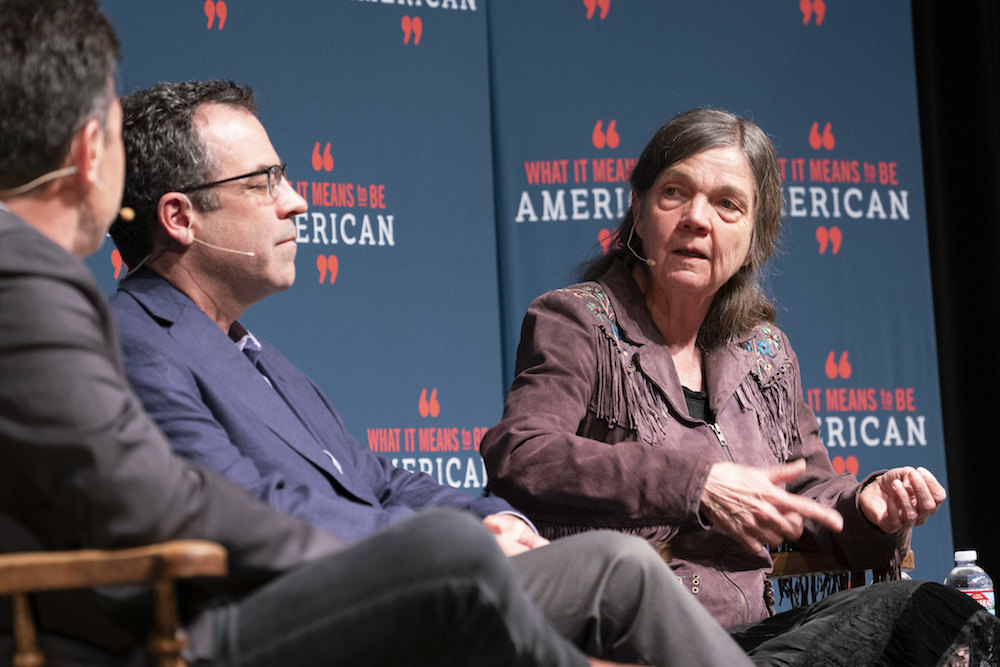 University of Colorado historian Patricia Limerick at "What It Means to Be American" in Taos, New Mexico. 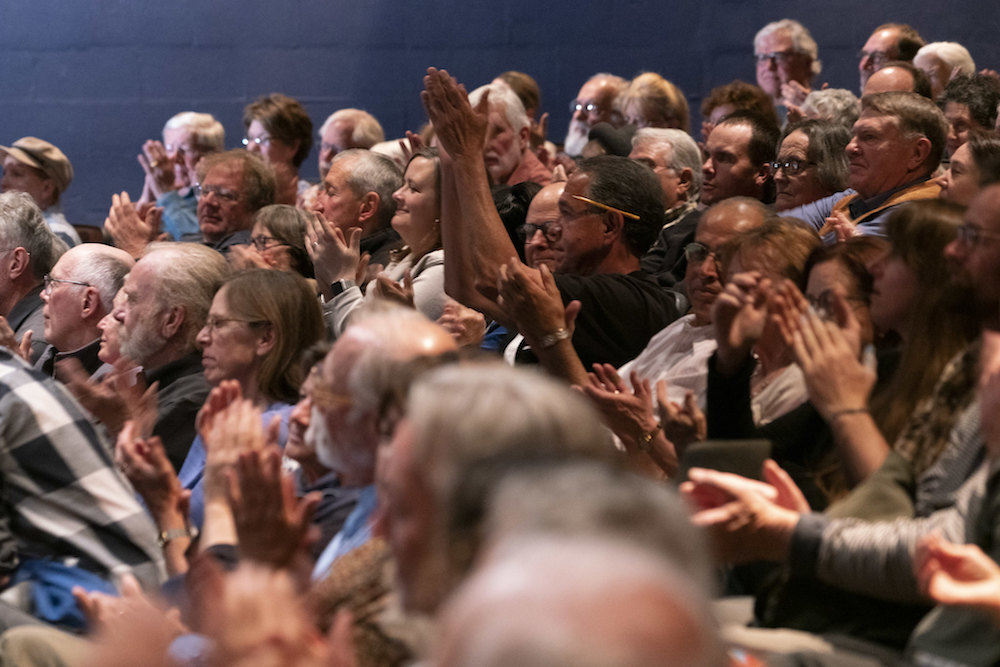 A full house at the Taos Center for the Arts. 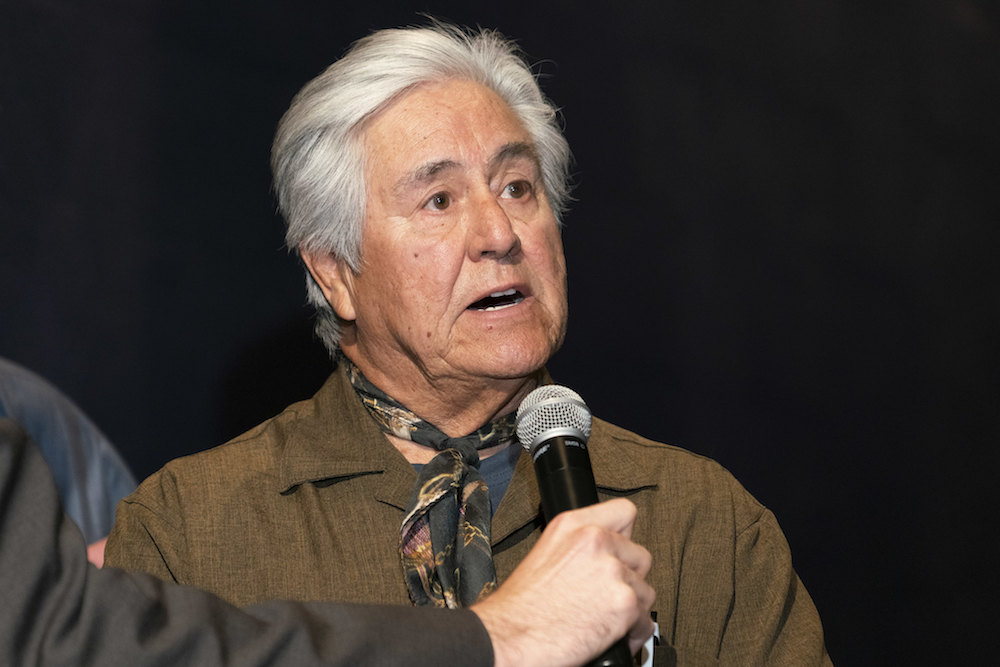 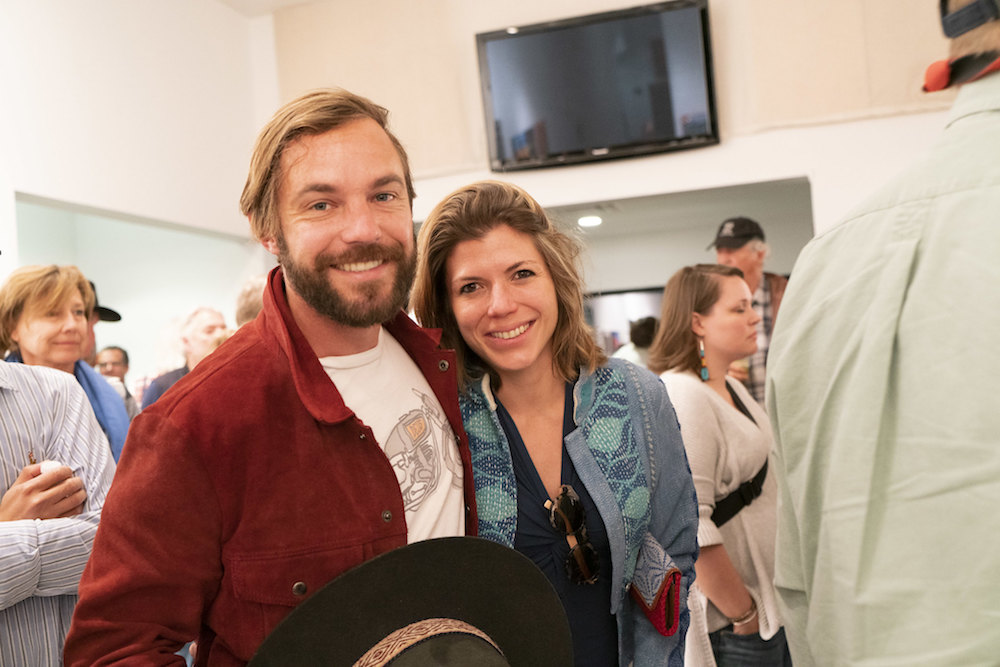 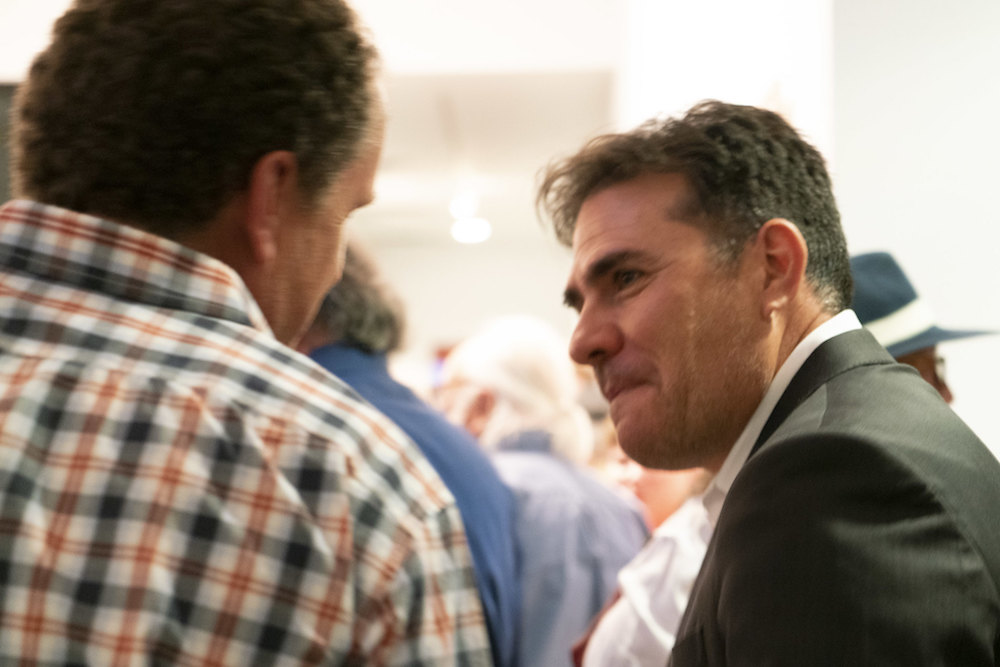