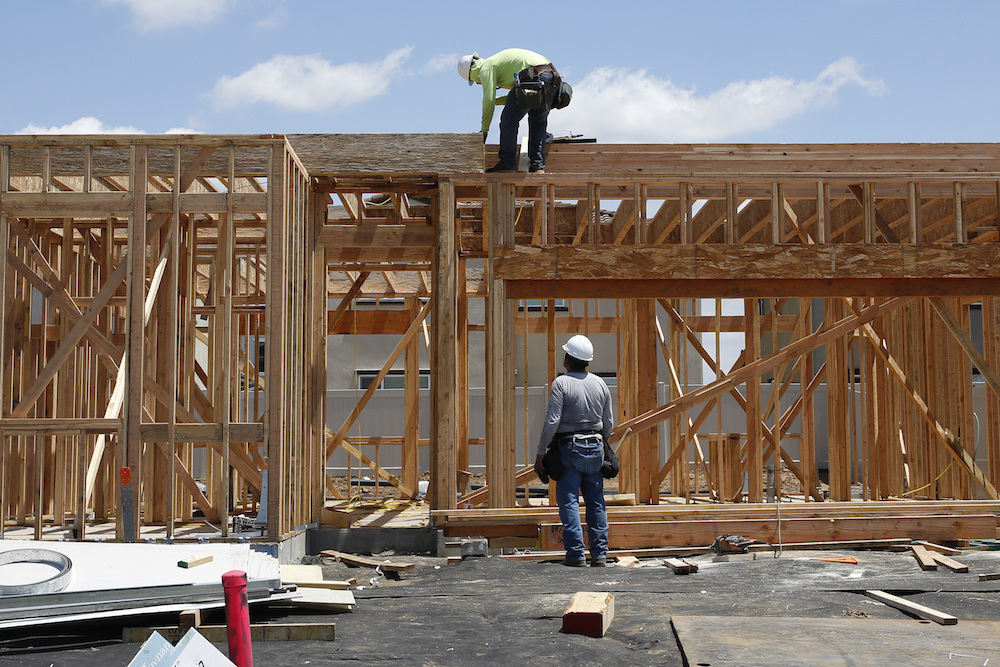 In this photo, taken in May 2019, construction is done on a home in a development in Elk Grove, California. Proposals to cap rent increases, set new rules for evictions, and cut red tape to build housing have faced tough political battles in Sacramento. Courtesy of Rich Pedroncelli/Associated Press.

Most Californians agree that housing is the state’s biggest crisis. But we have nothing resembling a consensus on how best to address it.

Up in Sacramento, our leaders have come up with all manner of housing ideas, but few have attracted broad support or advanced to become reality. And few of us want to be the first to try out a new way of meeting our housing needs. We fear that any new housing idea, put into practice, will disrupt our lives.

What California needs then is a housing laboratory, an experimental setup for new housing concepts. But labs need lab rats. Since no one else will volunteer, I modestly suggest a small but influential subset of Californians as our guinea pigs: the 120 members of the state legislature, leading members of the Newsom administration, and their top staff members.

Who better to represent us in trying out our housing future than our representatives?

Just imagine the possibilities if we required lawmakers and policymakers to live their own ideas, before applying them to the rest of us.

State Sen. Scott Wiener of San Francisco is certain that Californians need the power to override local zoning to produce taller, denser housing in transit corridors. But it’s hard to know how this will play out. So why not let Sen. Wiener find out by moving his family, his staffers, and the co-sponsors of his housing legislation, SB 50, into the tallest apartment building that can be found along a transit corridor in Sacramento? Of course, we’d need to bar Wiener’s team from driving—giving them the opportunity to wait outside their building for buses that run chronically late, a routine experience for Californians who rely on our underdeveloped transit systems.

We can conduct a similar experiment for legislative supporters of building new housing for the homeless. The state and local governments have budgeted billions to such housing, but how can it be made to work? One way to find out is to have a few lawmakers live in the homeless units themselves.

Of course, very little of this housing has been built. So, to give legislators the full experience, they should sleep in tents on the Capitol grounds until the homeless housing projects the state has funded are actually realized. This might encourage state lawmakers to put real pressure on localities to produce such housing—and fast. And that would make the housing cheaper, since delays of five years for approving housing projects—a typical delay for California—can add more than $150,000 to the cost of a unit.

Take micro-housing, the super-tiny units being touted across California. One such 160-square-foot can SmartSpace apartment squeezes in a sofa bed and a “smart bench” which can become a table or an extra bed. I, for one, would love to see a Bay Area legislator, State Sen. Jim Beall of San Jose, a leader on housing issues, squeeze into one of those micro-homes. Beall is among many California politicians who propose spending big money to produce very small numbers of conventional affordable units, at relatively high prices. Maybe these pols could get behind more and cheaper housing if they lived in tiny places.

Modular and prefabricated homes, another cheaper alternative, should also be foisted on our legislative guinea pigs. Why not put up a bunch of prefab homes in Capitol Park, for lawmakers and staff? Yes, some will call such homes an eyesore—just as they do wherever they’re proposed elsewhere in California—so let state leaders experience the visual consequences themselves.

The same logic should apply to “granny flats,” or accessory dwelling units, which the state has tried to make easier for homeowners to build. Any lawmakers who own homes should be required to add a granny flat on their property. They’d learn the ways local governments try to stop people from building them, and the high costs of constructing even small places. I’d also make the legislator-homeowners pay their own construction workers the very high prevailing wages—essentially union wages—that they demand of other home builders.

By the same token, all lawmakers who are landlords—at least 25 percent of the members of the legislature, according to CALMatters—should be made to follow rent control regulations. Many Democrats have been pushing rent controls as a way to address the cost of housing, so let them live under such rules. Those lawmakers who are tenants should also gain rent control protections. That might seem like a perk at first, but pretty soon, they’ll share the experiences of those of us who have lived in rent-controlled apartments—landlords who won’t fix anything and do whatever they can to force you out.

For example, when State Sen. Anthony Portantino, who blocked this year’s most ambitious housing bill, is working in Sacramento, he should have to stay in either Vacaville or Stockton, and drive himself the 50 miles to the Capitol along busy freeways during rush hour.

Experience is the best teacher, and there may be no better learning experience in housing than having your home taken by the state by eminent domain. I’d suggest that each year—for their own edification—5 percent of the legislature (or six out of the 120 lawmakers) have their home taken by eminent domain. Then they can deal with all the legal headaches and spend many years waiting for compensation.

But why stop with the horror of eminent domain? Major disasters offer a great opportunity for legislators and staffers to move into devastated communities. Why not deed a few abandoned, rubble-filled lots in the town of Paradise to lawmakers and staffers? They could pitch tents and deal firsthand with endless rebuilding delays. They’d only have to stay in the tents until construction is complete. How long would that take?

Learning doesn’t just have to come from destruction. The “Yes in My Backyard” legislators keep calling for massive new building of homes—and Gov. Gavin Newsom wants 3.5 million new homes as part of his housing “Marshall Plan.” I think that’s great, but all that construction can cause headaches, so why not require Newsom and his young family to live wherever housing construction is moving at the fastest pace so they can feel the impacts firsthand?

Now, any grand experiment requires a control group. A number of legislators oppose virtually all efforts to address the crisis. Some of these housing deniers should be forced to move in with parents or relatives—sleeping on sofas, not in spare bedrooms. Others should be required to negotiate at least 50 miles of traffic jams to get to their offices. For example, when State Sen. Anthony Portantino, who blocked this year’s most ambitious housing bill, is working in Sacramento, he should have to stay in either Vacaville or Stockton, and drive himself the 50 miles to the Capitol along busy freeways during rush hour.

Some lawmakers and staffers will want taxpayers to help subsidize their experiences in housing reality. But we should resist such subsidies. Indeed, it should be a requirement that at least half of all lawmakers’ income gets devoted to housing, leaving them poorer when it comes to meeting other needs. That would give them a taste of what life is like for so many Californians, especially the one-in-three renter households who spend at least half their income in rent.

Would feeling the various pains of the housing crisis firsthand really inspire lawmakers to find consensus on housing and take action that makes a difference? I’d hope so. But even it didn’t work, at least those failing to address the crisis would be suffering along with the rest of us.