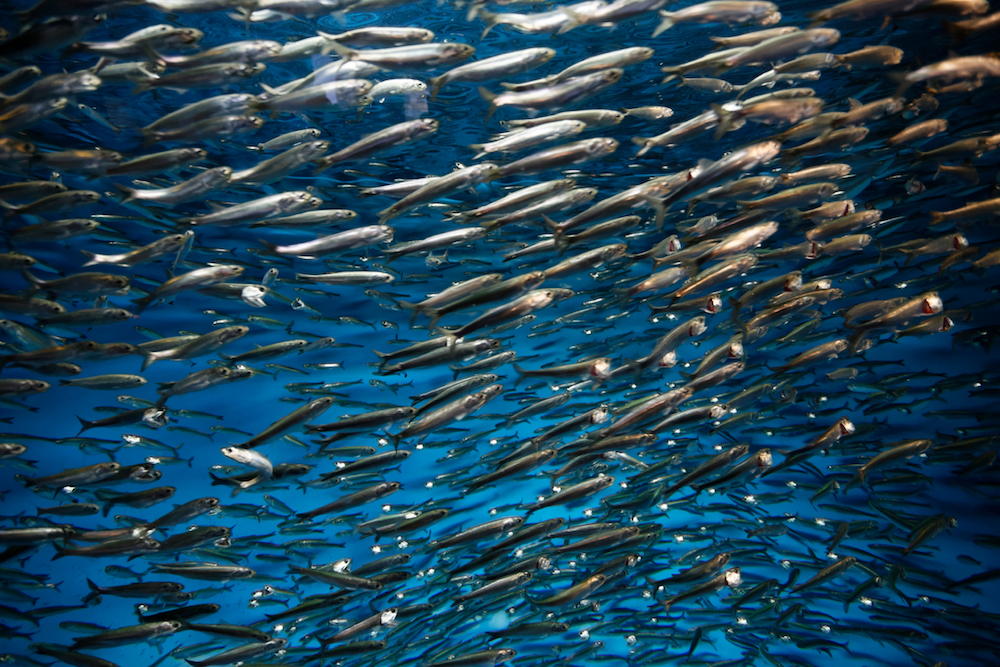 The Pacific sardine has been essential to making North America’s Pacific coast one of the most diverse ecosystems on Earth. Courtesy of Gilberto Villasana/Shutterstock.

At the Monterey Bay Aquarium, most people want to watch the sharks circle in the tanks. Or they check out spectacular octopi. Or maybe they stand outside on the decks and look for sea lions in the bay.

But I find myself staring, mesmerized, by a smaller and less glamorous fish: the Pacific sardine.

What draws me to a fish best known for being stuffed into cans?

It’s not only the way the silver-colored sardines shimmer in the water.

It’s more than the mystery—still not fully understood by scientists—of how they interact as they swim together in schools of many more fish than there are students at even our most overcrowded public universities.

And it’s not merely the appreciation I have for all the things this fish has done to make our state what it is today.

No, the appeal is more personal than that. These little fish stick together under intense pressure from larger forces—both natural and human—in a huge, overcrowded, and dangerous world that they really can’t control.

I identify with the sardine. Don’t you?

We Californians are all Pacific sardines now. In some ways, we might envy them.

I wish we all had their ability to collaborate with our own species. I wish we possessed their skills at synchronized swimming through all the traffic and other complexities of life in this state. I wish our kids spent as many hours a day in school as the sardines do.

And I wish it were as easy for people to find mates as it is for the sardines, who never have to sign up for Tinder—it’s just so easy to reproduce with the other sardines swimming alongside them.

I also wish I could be as useful to the world as Pacific sardines are.

I wish we all had their ability to collaborate with our own species. I wish we possessed their skills at synchronized swimming through all the traffic and other complexities of life in this state. I wish our kids spent as many hours a day in school as the sardines do.

You want to talk about commitment to diversity? The Pacific sardines have been essential to making North America’s Pacific coast one of the most diverse ecosystems on Earth.

Sardines do this by being forage fish, serving as a food source for sea lions, salmon, brown pelicans, dolphins, sharks, and whales, among others. The environmental group Oceana has called them “the engines, or the heartbeat of the ocean … supplying our entire ecosystem with the fuel it needs to be productive.”

For us humans, Pacific sardines can be prepared in many ways—canned, grilled, pickled, or smoked—and they always provide a shot of protein and fatty acids. And they have uses that go well beyond food. They can be reduced into fish meal, which can be fed to chickens or other animals, or into fish oil, which is an ingredient in paint, varnish, and linoleum.

Despite their value, Pacific sardines have not always been treasured. Indeed, the populations of these fish have suffered under the sorts of dramatic boom-and-bust cycles that are all too familiar to human Californians.

In the early 20th century, sardines were the most important commercial fish in the Golden State. The Monterey canneries from that era still define that city and its Cannery Row, a place John Steinbeck famously described as “a poem, a stink, a grating noise, a quality of light, a tone, a habit, a nostalgia, a dream.”

But over the past decade, the fishery has collapsed again. One assessment last year by the National Oceanic and Atmospheric Administration found a 98 percent decline in the Pacific sardine population since 2006. Changes in climate and ocean temperature, as well as the population of predators, are blamed for the collapse of their numbers.

July 1 was scheduled to be the beginning of the season for commercial sardine fishing, but for the fifth consecutive year, fishing of Pacific sardines has been barred. (A limited “incidental” catch is still permitted so that the fish may be sold as live bait.) Some observers of the fishery suggest it could be 20 years before the population recovers to the point that it could be fished again.

As in most California controversies, the ban on sardine fishing has produced conspiracy theories and allegations of fake news. Specifically, some fishing industries suggest that the government’s estimates of the sardine stock are far too low and ignore waters south of Morro Bay; some fishermen say they are seeing more sardines and want to be able to catch them.

But the evidence for leaving the sardines alone is powerful. One group of scientists, in a global study, found that forage fish like sardines are worth twice as much if they are left in the water—to serve as food for more commercially valuable fish.

So join me in doing what’s best for the Pacific sardine—to watch them, and marvel.