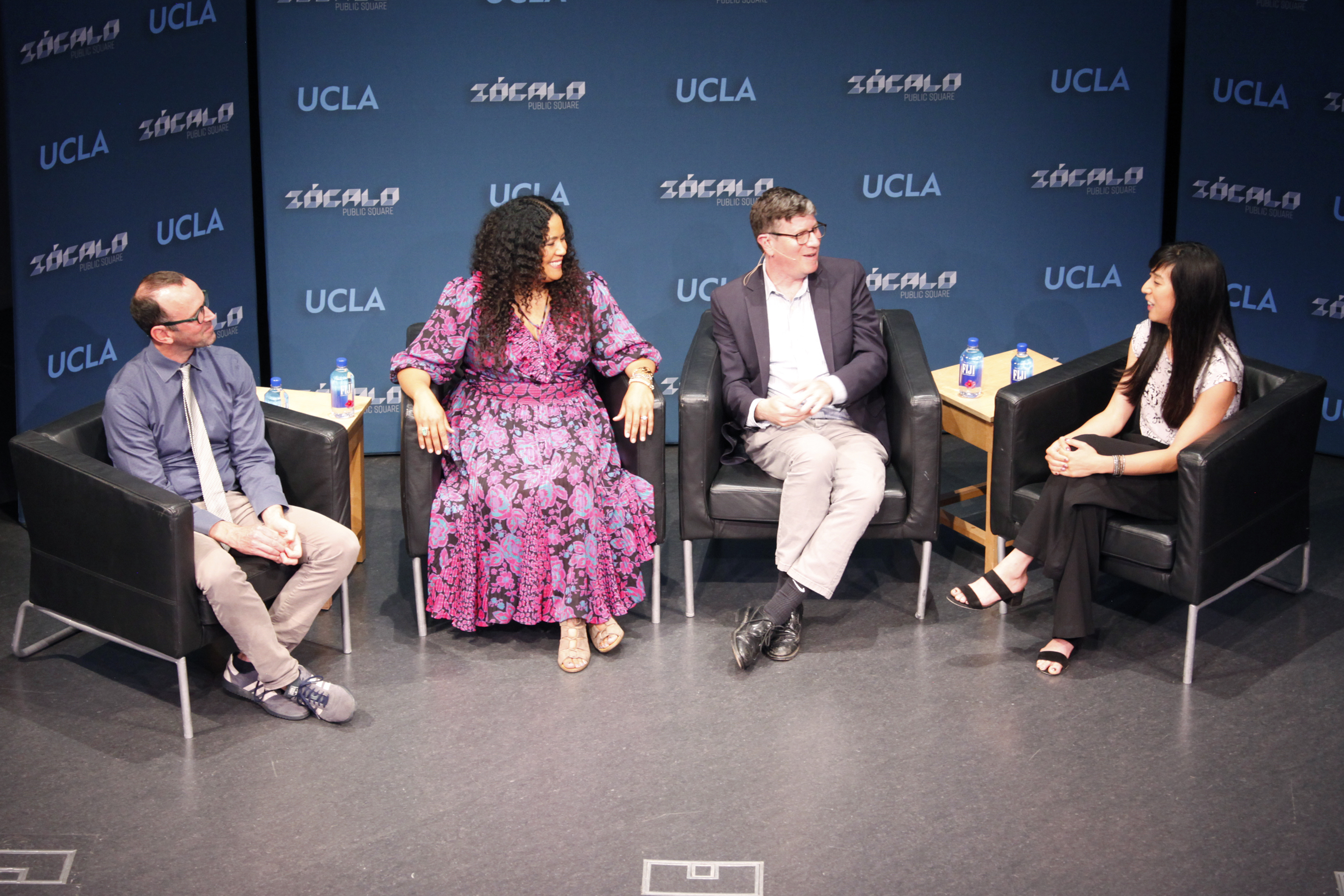 The Pacific Coast Highway, an iconic symbol of California and vital transportation route, runs along the state’s coastline from Dana Point in Orange County to Leggett in Mendocino County. But this highway and hundreds of other permanent structures along the coast are at great risk for falling into the sea as the Pacific Ocean rises.

The questions of how much sea level rise we can expect, how we balance public and private concerns in addressing coastal changes, and how we can reduce the chances of even more catastrophic sea level rise were at center stage during a Zócalo/UCLA Downtown event titled “What Will California’s Coastline Look Like in 2100?” The event, moderated by Rosanna Xia, environment reporter for the Los Angeles Times, took place before a standing-room only audience at the National Center for the Preservation for Democracy.

Xia opened the event by asking: Why is the sea rising?

Professor of Atmospheric and Oceanic Sciences Alex Hall, director of the UCLA Center for Climate Science, broke down the causes of sea level rise over the past century by percentage: 45 percent of the rise has occurred because the ice sheets and mountain glaciers are melting. Another 45 percent is because, as the ocean has warmed, “thermal expansion of sea water” has occurred, literally expanding the size of the ocean.

“The final 10 percent,” Hall said, “comes from the drawdown of aquifers,” from which we draw water to irrigate crops. This water that once was underground instead ends up in streams and rivers that flow into the ocean.

By 2100, Hall said, we can “anticipate probably around 2 feet of sea level rise.” However, he warned, that number is conservative, and if the water underneath the ice sheets continues to warm and the ice sheets melt completely, sea levels would rise by 11 feet. While this worst-case scenario is unlikely, “we are really courting catastrophe by continuing to emit greenhouse gases” Hall said.

As the sea level rises, all of this water has no place to go but inland. Xia asked: What is “getting squeezed out” as the water rises?

Sean B. Hecht, co-executive director of the Emmett Institute on Climate Change and the Environment at the UCLA School of Law, explained that dune and beach ecosystems naturally migrate inland as the water rises. But if there are “hardened infrastructures” in place—things like highways, sea walls, and homes—this natural migration process can’t happen. And so homes and highways themselves become vulnerable.

In California, as sea level rise changes the profile and location of the beach, that can change people’s property under our laws. The state’s public trust doctrine, Hecht explained, says “that anything from pretty much where the wet sand meets the dry sand towards the sea is held in trust for the public, and is owned by the public.” So when that line moves, property lines, and public access, also shift.

How then do we honor the rights of private property owners and the rights of the public along a changing coastline? The answer to this question is still very much in the works, and requires the California Coastal Commission, which is charged with oversight of land use and public access to California’s coastal zone, to balance these issues and make some tough decisions, said commission member Effie Turnbull Sanders. In this decision making, it seems unlikely that all sides will be able to get what they want, and there’s no “one-size-fits-all model,” Turnbull Sanders said.

The commission and other agencies have so far focused on protecting wetlands as this “coastal squeeze” continues, Turnbull Sanders said. Wetlands are important not only because they provide a habitat for coastal wildlife, but they also help regulate flood waters.

While some homeowners have turned to sea walls to attempt to hold back the rising waters, sea walls are not always permitted because they often have a negative impact on areas around them, because they can violate the public trust doctrine and Coastal Act by preventing public access to the sea, and because walls are merely temporary fixes. The water will always win.

There needs to be a holistic approach to addressing these questions and problems, Hall said, because the decisions one jurisdiction makes along the coastline affects the jurisdictions beside and near it. The Pacific Ocean, Xia said, “is not thinking about these boundaries” the way we do.

By 2100, Hall said, we can “anticipate probably around 2 feet of sea level rise.” However, he warned, that number is conservative, and if the water underneath the ice sheets continues to warm and the ice sheets melt completely, sea levels would rise by 11 feet.

Private homes and Golden State beaches are not the only things at risk as the sea level rises. Public and economic infrastructure are also going to be affected. For example, the San Onofre Nuclear Plant which sits right on the coast just south of San Clemente, is being decommissioned. And the ports of Long Beach and Los Angeles—and all of their economically vital facilities—will need to adapt as the sea level rises. The Pacific Coast Highway will likely have to be rerouted inland and the famous Amtrak Pacific Surfliner route from San Luis Obispo to San Diego might suffer the same fate. Prioritizing which structures are protected and which are moved or removed is not going to be easy.

What can Californians do to mitigate the looming disaster of sea level rise? Panelists had several suggestions. Turnbull Sanders said it was important to support candidates who advocate for changes, and to hold those who are actually elected accountable. And Hecht stressed that we must “be aware as individuals that we are part of a social contract” and have an understanding and “curiosity about all the different ways that public infrastructure supports our lives.”

Hall said that “it’s clear that we have to stop emitting greenhouse gases.” If California can reduce greenhouse gases, we can greatly reduce the risk of a big catastrophe, in part because California’s example can reach the rest of the country and the world. “If we make it happen here, it can scale,” he said. 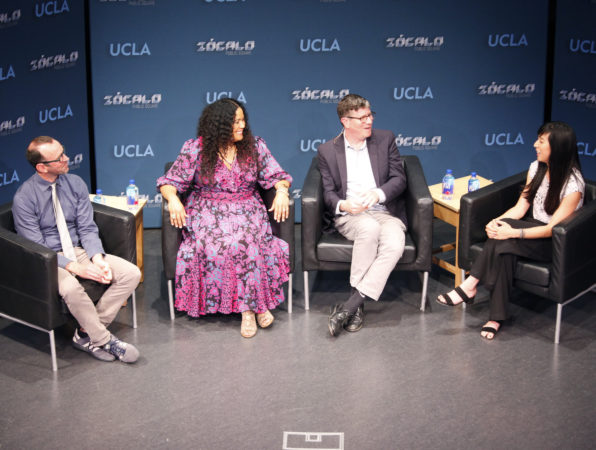 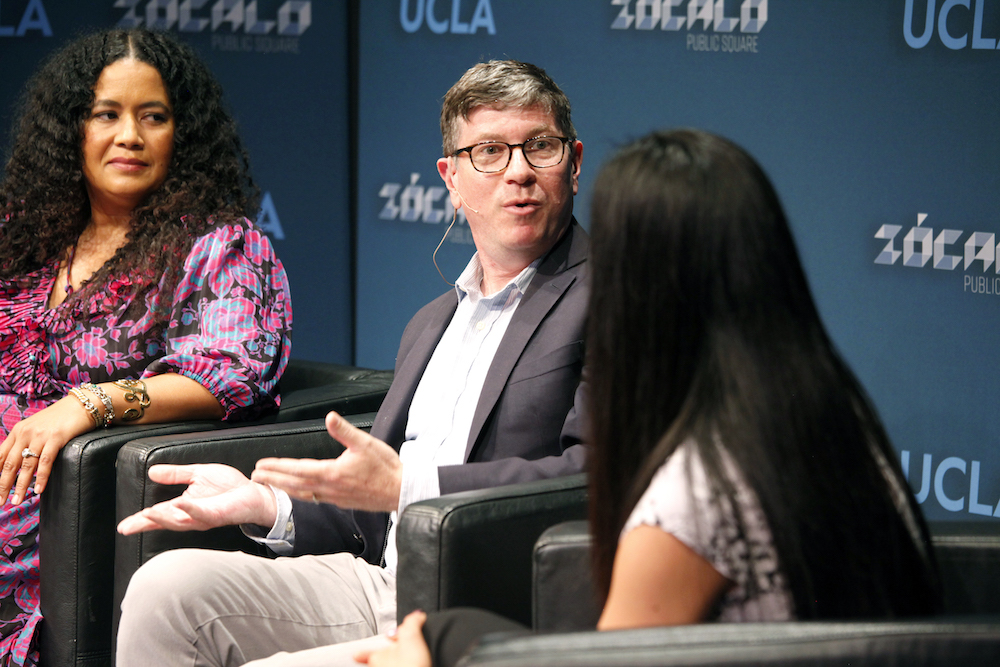 Sean B. Hecht, Co-Executive Director of the Emmett Institute on Climate Change and the Environment at the UCLA School of Law, at Zócalo/UCLA. 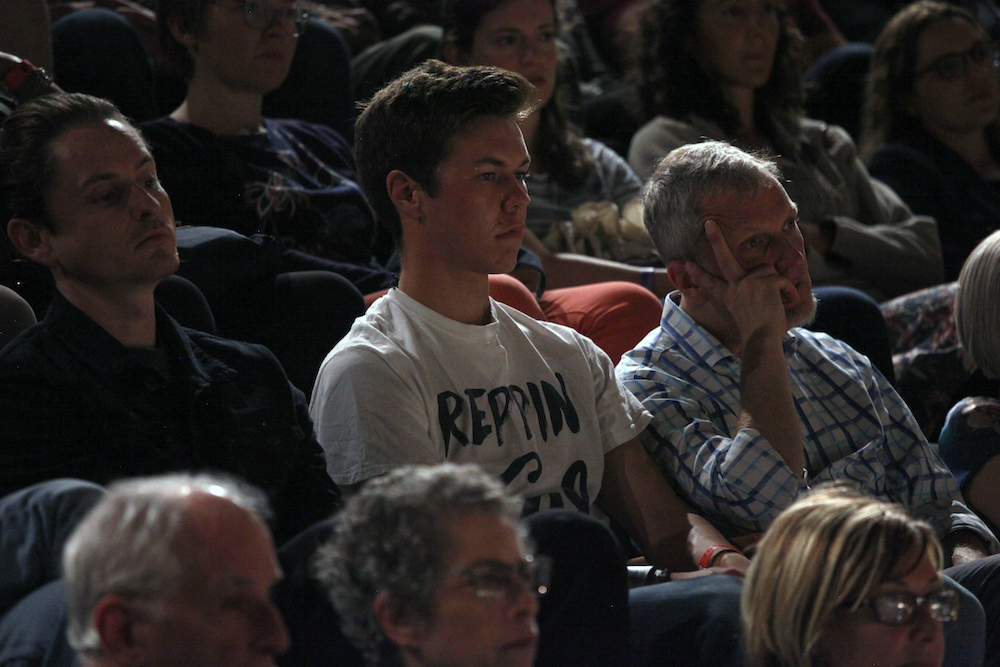 A standing-room only crowd at the National Center for the Preservation of Democracy in Los Angeles. 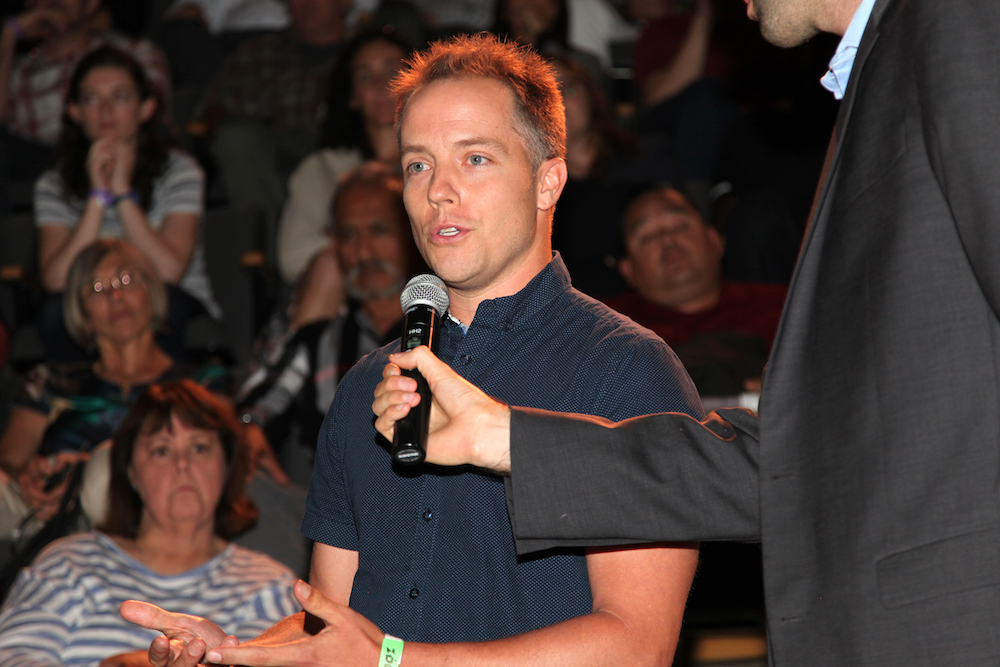 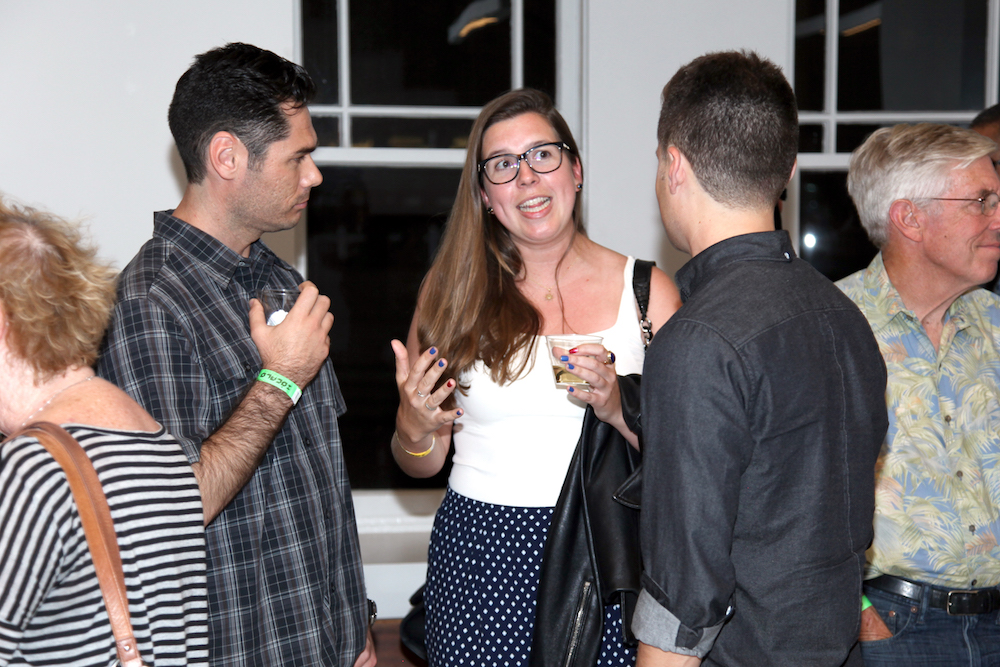 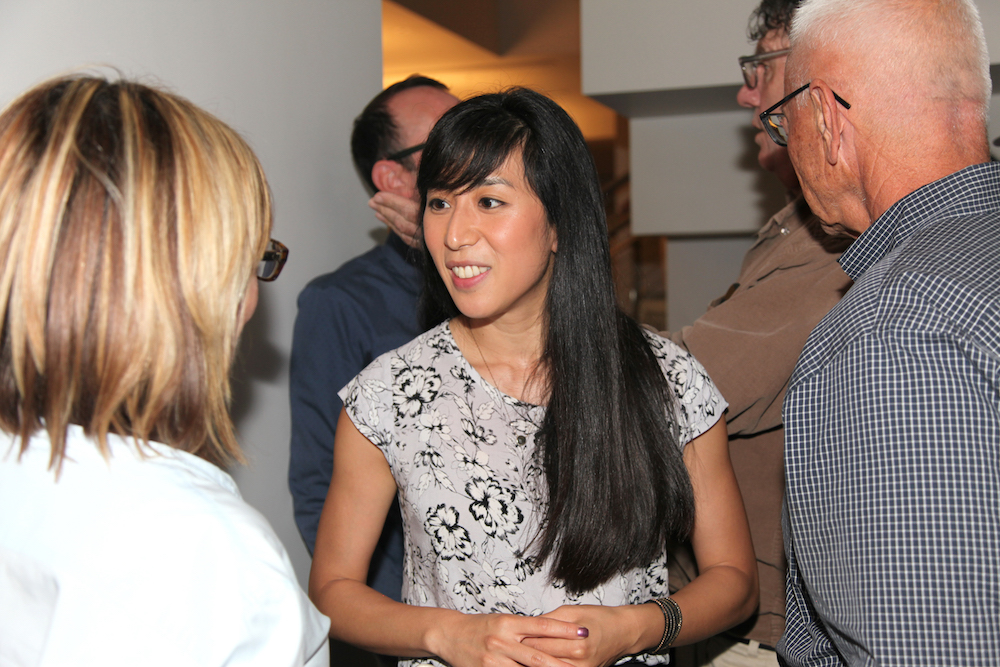