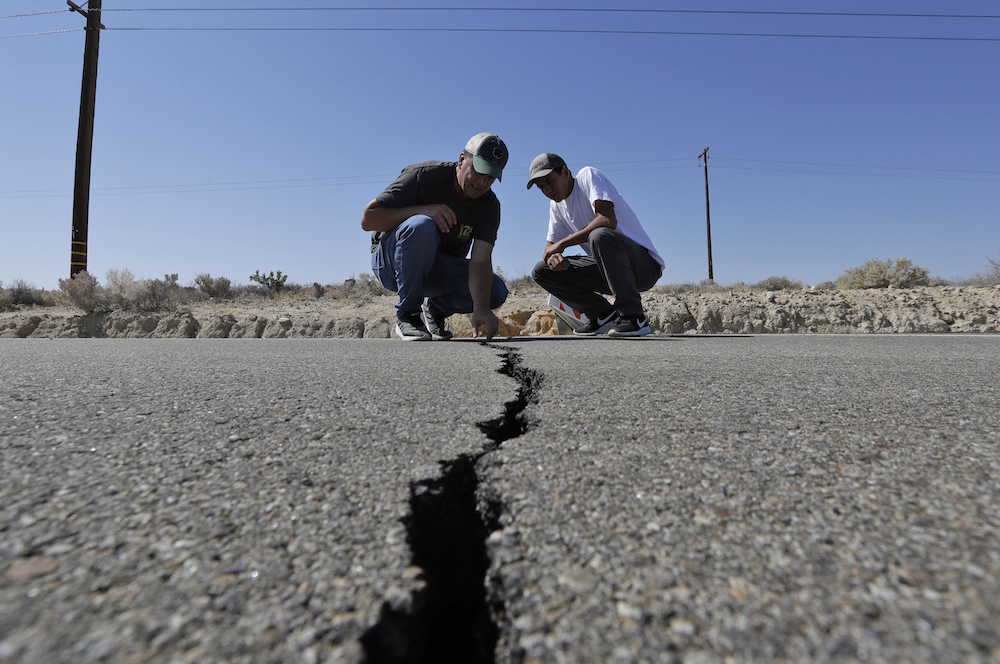 Ron Mikulaco, left, and his nephew, Brad Fernandez, examine a crack caused by an earthquake on Highway 178 on Saturday, July 6, 2019, outside of Ridgecrest, California. Courtesy of Marcio Jose Sanchez/Associated Press.

Of all the lies Californians tell ourselves, one of the biggest is that we hate earthquakes.

The unspoken truth is that we love earthquakes, as well we should.

Don’t give the beaches and the warm weather all the credit. Earthquakes are the other natural phenomena that have made California great. And that’s not merely because the force of so many long-ago temblors sculpted our glorious mountains and valleys.

In this state, earthquakes play as many different roles as our finest Hollywood actors do. Quakes inspire us to dream while grounding us in reality. They teach us indispensable lessons about the land and ourselves. And they shape our culture, provide our lives with meaning, and are one of the few things with the power to bind Californians together.

We would be on very shaky ground without them.

Earthquakes have a reputation for destruction, but in California, they’ve largely been a force for construction and progress. No quake was ever more constructive than the one that leveled San Francisco in 1906. Before that disaster, the city was a small, struggling, and thoroughly corrupt metropolis. After the quake, the city’s governing crooks were put on trial, and the place was rebuilt into one of the most beautiful settlements in the history of civilization. By 1911, the people who gave San Francisco a second life had taken over the entire state, establishing the infrastructure, progressive legislation, and democratic tools (like the ballot initiative) that define public life in California to this day.

And sometimes, quakes can give our state a bigger kind of boost. The 1989 Loma Prieta quake in Northern California led to new investment that helped fuel Silicon Valley’s boom. Reconstruction after the 1994 Northridge earthquake helped Los Angeles recover from the riots and recession of the early 1990s.

While the modern American economy is famously unequal and unfair—the benefits are narrowly distributed to the richest among us, while the costs are borne by most of us—the economics of earthquakes work in a far more progressive way. The damage and death, while tragic and traumatic, tend to be limited to a relatively small number of people and places, but the benefits of the money spent on post-quake repairs and upgrades are widely distributed.

Even in bad times or during budget cuts, the federal government eagerly throws money at our state after earthquakes. Why do earthquakes produce such largesse? Because earthquakes can’t be blamed on the usual American scapegoats—the media, poor people, gays, immigrants. They are nobody’s fault. Indeed, earthquakes are one of the few events that can convince the rest of the United States to feel any sustained pity for us Californians; when the ground isn’t shaking, we are envied and loathed.

To keep the funds flowing, it is in Californians’ best interests that we play the part, expressing our fear of quakes, as well as our powerlessness in their aftermath. Our secret affection for quakes must be buried deep.

But it is there. Earthquakes are essential to Californians’ self-regard and self-importance—our sense of ourselves as a people apart, able to survive anything. We proudly reside on moving ground where others dare not—and this has given us the courage to live as we wish and speak our minds.

Both my grandmothers told stories about the quakes they had survived; my Grandma Oops was especially fond of recalling Southern California after the post-Long Beach quake in the spring of 1933—a time of great childhood freedom since the schools, having been destroyed, were closed for months. To try to keep students from falling behind, radio stations broadcast math and spelling lessons, and even tests for parents to administer.

Of course, many other places around the world—from Japan to Italy, China to Mexico, Turkey to Indonesia—can experience earthquakes even bigger and more damaging than ours. But California stands out for having built its culture on the earthquake, quite literally.

In describing the standard motion picture, Samuel Goldwyn once declared: “We want a story that starts out with an earthquake and builds up to a climax.” Hollywood has embraced the earthquake as the backdrop for stories of togetherness and romance. At the end of the romance-turned-disaster plot of the 1936 classic San Francisco, about the 1906 earthquake, Clark Gable and the rest of the cast march back into the city while singing the “Battle Hymn of the Republic.” In the popular, if tasteless, 2015 film San Andreas, Dwayne “The Rock” Johnson and his co-stars flirt and even make out with each other as an earthquake and tsunami lay waste to California. In our state, apparently, mass casualties are a real turn-on.

Earthquakes are often described, incorrectly, as a California curse, a fly in the Golden State soup, the dark side of a place that is otherwise sunny and bright. To the contrary, the sudden earth-shifting of quakes is essential to California’s appeal—the sense that here, everything can change in seconds.

Our state’s great 20th century chronicler, Carey McWilliams, wrote that “the state is always off balance, stretching itself precariously” and possessing a “notorious lack of social and political equilibrium.” All our shaking was precisely what makes us special. “California is no ordinary state,” he wrote. “It is an anomaly, a freak, the great exception.”

Why do earthquakes produce such largesse? Because earthquakes can’t be blamed on the usual American scapegoats—the media, poor people, gays, immigrants. They are nobody’s fault. Indeed, earthquakes are one of the few events that can convince the rest of the United States to feel any sustained pity for us Californians.

While earthquakes reflect our unsteadiness, they also can keep us relatively sober. The idea of the “Big One”—the massive earthquake that we are told will change everything—is one of the most successful pieces of propaganda in state history. Our foreknowledge of that quake has moved generations of Californians—typically a “live in the moment” lot—to do long-term planning, reinforce and rebuild infrastructure, bolt our homes to their foundations, and prepare for emergencies well in advance. The dangers of earthquakes also prevent us from building risky buildings in risky places.

We Californians could be better prepared (only 13 percent of homeowners have earthquake insurance). But—without the prospect of big earthquakes—would our feet ever touch the ground?

Indeed, the big quakes this month near Ridgecrest provided reminders that Californians are buoyed rather than chastened by quakes. At Dodger Stadium, when the upper deck swayed, people didn’t cower in fear—they applauded, as if this were just another ride in the theme park that is California. And the game continued without interruption.

The comedian David Spade captured the moment in a tweet: “All kidding aside. Rules for earthquakes. Stop… drop… then instagram yourself and be super dramatic. Sit back and count likes.”

I experienced the 7.1 quake on July 5 while eating dinner at that iconic California roadside restaurant, Pea Soup Andersen’s, in the small Santa Ynez Valley town of Buellton. There, as the earthquake rolled gently through the room, a few diners said, “Wow,” and watched the chandeliers sway for 30 seconds before returning to their meals. It was a small interruption, the same as if a fire engine or a small band had passed by.

Of course, more devastating quakes have shaken us more thoroughly, and to great action. In recent weeks, while pondering our state’s failure to address our housing crisis, I’ve found myself wondering if an especially damaging quake might inspire our state and local governments to lift anti-housing regulations and allow us to build enough homes to meet our needs.

We shouldn’t pray for earthquakes as solutions for our problems. But we ought to be grateful for them. The lives of Californians are so full of disorienting change. Our neighbors may move away, and our families may leave us. But earthquakes, like the most loyal of friends, always come back to visit.