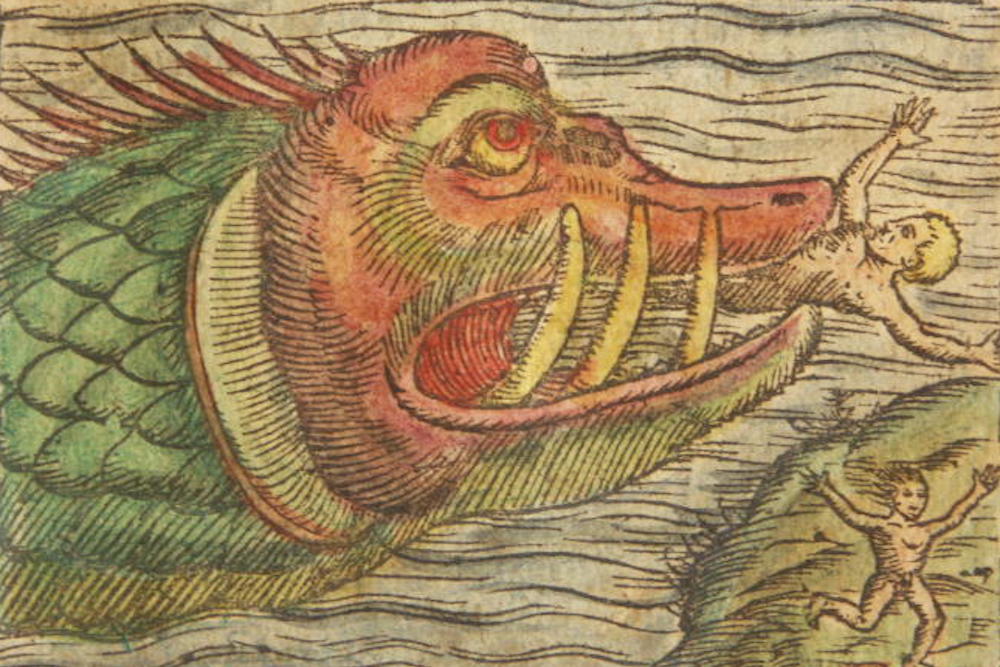 This image of a sea monster was drawn by Sebastian Münster around 1600. Courtesy of Columbia University/Wikimedia Commons.

As California builds its capacity to fight the Leviathan that is the Trump administration, does it risk turning our state government into a Leviathan of our own?

This unhappy question—about whether regular Californians and their communities may get swallowed up by the state monster we’re creating to fight the federal monster—occurred to me while I was reading Gary Gerstle’s powerful 2015 history, Liberty and Coercion: The Paradox of American Government. The book breaks new ground by examining the history of governance in the United States by putting our 50 peculiar institutions—our states—at the heart of the narrative.

The key to understanding the American experiment, argues Gerstle, an American historian based at the University of Cambridge, is grappling with a nasty contradiction. The American Constitution and our federal structure have liberal origins: They are designed to limit government in the name of protecting liberty. But our states are governed by a different, more authoritarian theory: They can use their strong policing powers to coerce us in the name of the greater good. For most of American history, the states got away with terrible abuses against their people, Gerstle notes, because they were exempted from the Bill of Rights.

We typically associate the power of states with the South, along with the horrors of slavery and Jim Crow. But throughout its history, California has been aggressive in using, and often abusing, its state power—in our genocide of Native Americans, our discrimination against people of Asian origin or heritage, and our protection for those legendary corporate crooks, the railroad barons of Sacramento.

Indeed, even as the Golden State has changed, defending our state’s power has been a California constant. Gerstle quotes Stephen Field, the first U.S. Supreme Court justice from California, as embodying the “laissez-faire” view that states can do whatever they want. Field wrote in 1885, “Neither the Fourteenth Amendment, broad and comprehensive as it is, nor any other amendment, was designed to interfere with the power of a State, sometimes termed its police power, to prescribe regulations to promote the health, peace, morals, education, and good order of the people, and to legislate so as to increase the industries of the state, develop its resources and add to its wealth and prosperity.”

It wasn’t until the middle of the 20th century that state power was finally curbed by the federal government, which grew to previously unimaginable size and power in response to the Depression, World War II, and the civil rights movement.

Ironically, this expansion of federal power—as well as the rollback of state power—was championed by a former California governor, Earl Warren, when he was chief justice of the U.S. Supreme Court. Under the Warren Court, the more expansive federal government stopped states from violating the rights of minorities, while building up social programs for the poor and middle class. But the new federal Leviathan also imposed unprecedented regulations on people’s lives (including restrictions on immigration) and ratified corporate power (which provided the money-fueling politics), as it created an imperial presidency and a fearsome national security state that engaged in constant warfare.

Our “era of near-permanent war,” Gerstle writes, “threw together in one government a judicial and executive apparatus devoted to expanding civil rights and civil liberties, and an equally vigorous national security apparatus driven by the imperatives of surveillance and secrecy.”

These contradictions, Gerstle argues, have contributed to today’s paralyzing political polarization. The federal government is so powerful that both political parties feel compelled to fight for every inch of power. Four years after Gerstle’s book, I’d add this irony: For all their disagreements, Trump and his Democratic challengers agree that they like the federal juggernaut. Their battles are over who controls it.

That’s why California’s fight against the federal government is righteous—and necessary. How could our state not resist when faced with a federal monster led by such a deranged and dishonest person? And it makes sense to build up the Golden State’s own capacities, and expand its own legal power, in the service of protecting our immigrants, our cities, our health care, our economy, and our environment from a Trump administration that lies about everything from the state of our streets to our elections.

But in so doing, we are turning our already powerful state into a one-party-controlled Leviathan of its own. Californians of all stripes should be scared. Power corrupts, and it’s inevitable that our state leaders will eventually turn this creation against us. Our state government is also profoundly vulnerable to hijacking. It’s not hard to see how powerful interests hostile to California could seize control—likely through manipulation of our dysfunctional ballot initiative process or of our top-two election system, which can produce perverse and anti-democratic results.

While the federal government is fighting an uncivil war against California today, I’d argue that in the long term, the biggest threat to California is its own state government, which was devoted to centralizing power long before Trump emerged.

In California, the left and the right have both worked to make Sacramento more powerful for more than a century. In the first half of the 20th century, progressives took power from local communities in the service of creating regulatory agencies and statewide political tools like the ballot initiative. In the second half of the 20th century, conservatives, in their pursuit of tax reductions and longer sentences against criminals, transferred power from local communities to Sacramento. In the 21st century, ascendant progressives have chosen to award more power to the state—all in the name of tackling worthy problems including poverty, pollution, and climate change.

Gerstle, as a historian all too familiar with the evil that states can do, is wary of newly powerful states, and argues for remaking the U.S. Constitution to put the federal government on firmer footing. But reading him, I had visions of an epic battle between the twin Leviathans of federal and state power, roiling the seas around every single citizen, and potentially swamping many communities and values that we hold dear.

Instead, Californians, and citizens of other states, should consider a different form of resistance. We must form a movement to restore local democracy and control, and defend ourselves against excessive power—be it in Washington, D.C., Sacramento, or in corporate corridors.

How could our state not resist when faced with a federal monster led by such a deranged and dishonest person? But in so doing, we are turning our already powerful state into a one-party-controlled Leviathan of its own. Power corrupts, and it’s inevitable that our state leaders will eventually turn this creation against us.

After a century of centralizing power at the state level, California’s local governments are too weak and resource-starved to address our most serious problems in housing and school quality. We must return power to these local sites. Our cities are full of smart and sophisticated people who could govern themselves better than the Sacramento mandarins. And a decentralized system would provide both greater diversity and greater protection from the excesses of state power.

One obvious lesson of the Trump era should be the danger—dare I say, the madness—of investing massive government authority in one person. The best bet for American democracy’s survival would be to return its authority to the local level, where politics can still be conducted through human conversation, not through social media blasts. Back in ancient Greece, cities were the primary units of democracy. They should be again.

Of course, first things first. We desperately need Sacramento’s Leviathan to protect us from the feds. But once that fight is won, Californians and their communities will need to come together to protect ourselves from Sacramento.