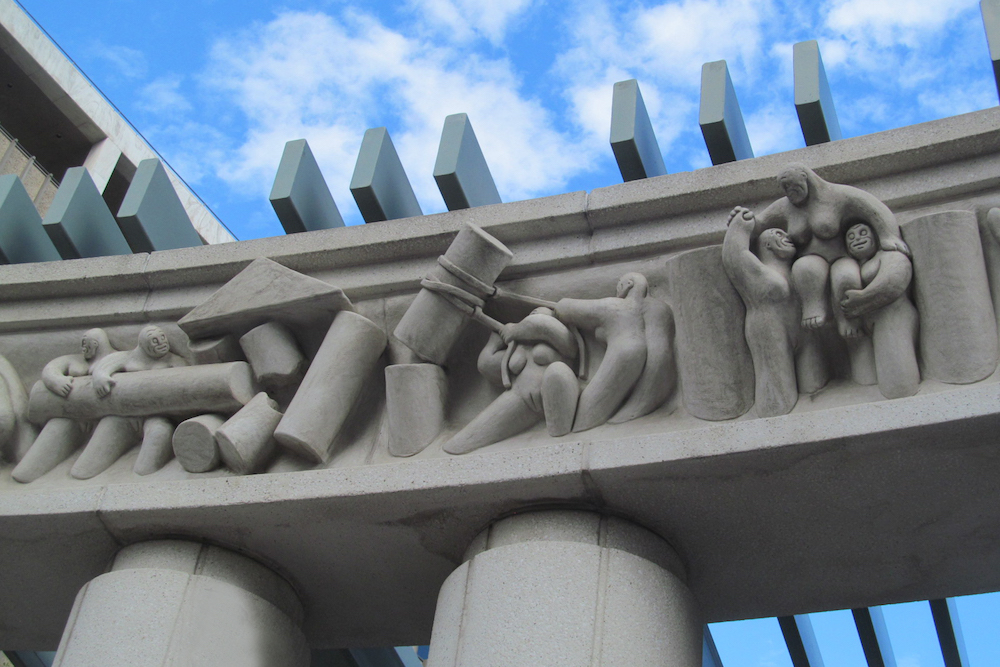 Detail of The New World by Tom Otterness, a public art installation at the Roybal Federal Building and U.S. Courthouse where Manuel Real worked. Courtesy of rocor/Flickr.

While we should not rejoice at the death of Manuel Real, his passing offers some good news: At long last, California’s most troublesome federal judge is off the bench.

Unfortunately, the fact that it took death to retire Real is a scandal that survives him. And that scandal should be a lasting stain on our judicial and political systems.

Indeed, the career of Real—whose 53 years on the federal bench in Los Angeles made him the nation’s longest-serving active judge—offers ugly lessons about character, ideology, impunity, and the impotence of impeachment.

If you’re surprised at just how harsh the first three paragraphs of this column are, it’s because you don’t know the Manuel Real story. Or it’s because you read the news accounts and obituaries following Real’s death earlier this summer, which were shockingly generous to a judge well known for treating people poorly in his own courtroom.

The New York Times, Los Angeles Times, The Associated Press and various legal publications portrayed his career as that of a judicial giant. He was appointed to the bench by Lyndon B. Johnson in 1966, personally supervised probationers, and stuck up for the underdog in some civil rights cases. In the early 1970s, Real courageously ordered the desegregation of Pasadena schools, and more recently blocked President Trump’s efforts to take away anti-gang money from local police departments that don’t cooperate with federal immigration enforcement.

“A towering legal figure,” the L.A. Times called him. A number of stories approvingly quoted a statement from Central District of California Chief Judge Virginia A. Phillips calling him the “heart and soul” of the court and adding: “His legacy of public service is an inspiration beyond compare.”

Real’s record is certainly incomparable, but let’s pray it’s not an inspiration for other judges.

What the obituaries and remembrances have missed was his routinely awful, abusive, and unfair treatment of people in his courtroom, his lack of judicial temperament, and a decision-making style so rushed and lawless that he was routinely reversed by higher courts in his major cases. At one point, Congress even held a hearing about impeaching him.

I’m from Pasadena, and I’ve known Real’s name since I was a kid, given his role in the desegregation cases. I had always thought of him as a hero.

So it was a shock when, as an L.A. Times journalist, I covered a handful of hearings in his courtroom. I had witnessed all sorts of judges in various parts of the country, but I had never seen someone as tyrannical or angry as Real. He’s also the only judge to ever threaten me with contempt. For what? I still don’t know. I was quietly sitting in the gallery, taking notes.

Real sometimes justified his behavior in the name of speed and efficiency—he wanted to keep his case backlog low. But everything about his behavior encouraged disrespect for the law. He would prevent jurors from taking notes or asking that courtroom testimony be read back to them. He often yelled, or cut off questioning of witnesses in ways that made no sense. He so often threatened sanctions that some attorneys wondered if he was mentally ill.

He loved to repeat a bizarre mantra when lawyers objected to his conduct: “Counsel, this is not Burger King! In this courtroom, we do it my way!”

That Real was a judicial menace was no secret. His fellow judges knew it, lawyers knew it, and journalists documented it. Yet no one would stop him. Prosecutors mostly suffered him in silence, because, for all his liberal bona fides, he gave out tough sentences, including long sentences in drug cases. But civil attorneys, defense lawyers, and courtroom witnesses saw him as fundamentally unfair.

“A modern-day Torquemada,” is how the attorney Stephen Yagman, who engaged in a decades-long feud with Real, described the judge. After witnessing Real in action, Tom Hayden, the activist-turned-Democratic politician, wrote that the judge is “even worse than Judge Julius Hoffman,” who presided over the infamous Chicago Seven trial in 1969.

“He destroys a lawyer’s ability to present a case,” the prominent defense attorney Harland Braun once told The Nation. “He tells the jury you’ve done something wrong. He makes faces. I’m sorry, but he acts like a 5-year-old with power.”

During a long tenure as the central district’s chief judge, Real cowed his fellow judges on the bench; they complained about him privately but didn’t challenge him publicly. He mishandled important matters, including a trust fund he supervised containing the assets of Philippines dictator Ferdinand Marcos. And he was so much a law unto himself that he often refused to obey the orders of the appellate judges who oversaw him.

The 9th U.S. Circuit Court of Appeals judges eventually took one criminal case away from him after he dismissed it three times despite their repeated orders that it go forward. One analysis found he was reversed in one-third of all cases—more than twice the average for L.A. federal judges—and two-thirds of the time in major cases. Many of the reversals were because he moved too fast, issuing judgments without proper evidence or hearings.

To understand how unhinged Real’s decisions were, consider his 2000 decision to take over a bankruptcy case involving a woman whose probation he was overseeing. Real’s intervention, which was without any legal basis, allowed the woman to live rent-free in a home, costing creditors tens of thousands of dollars.

But the system of investigation and punishment for federal judges, who are appointed for life is weak—because the system is run by their judicial colleagues. Judges are almost never disciplined. Real escaped with a reprimand for behavior that should have ended his career.

At the time, Ralph K. Winter Jr., a federal appeals court judge, all but accused federal judges, who police themselves, of a cover-up. “There cannot be public confidence in a self-regulatory misconduct procedure that allows those closest to an accused colleague to dismiss a complaint by actions that ignore statutory procedures and simultaneously render the tribunal of final review impotent,” Winter wrote.

In 2006, the House of Representatives held a hearing on whether to open an impeachment inquiry against Real. But in that hearing, California members of Congress argued that his behavior didn’t rise to the level of “high crimes and misdemeanors.”

But the story of Real, and especially the whitewashed postmortem version of his career, reveal something truly horrible about the judicial system we rely upon to protect us: its unwillingness to challenge misconduct among its judges. Appallingly, in his later years, other judges—including appellate judges who frequently had to reverse him or remove him—even honored him.

Real was unrepentant, saying he didn’t care what others thought. Interviewed for one of several L.A. Times stories about his judicial conduct, the judge said: “The best thing about being a judge is the nature of the service you think you’re rendering. The worst thing, probably, is the inability to come down off the bench and punch somebody in the nose.”

So why did Manuel Real in death get the sort of generous judgments that he denied so many who appeared before him?

Part of it is the natural human reluctance to criticize the freshly deceased. Real also was a local boy (the son of Spanish immigrants to San Pedro) who could be charming and public-spirited outside the courtroom; an elementary school is named for him in Perris, in Riverside County, because he helped establish a school district there.

But the story of Real, and especially the whitewashed postmortem version of his career, reveal something truly horrible about the judicial system we rely upon to protect us: its unwillingness to challenge misconduct among its judges. Appallingly, in his later years, other judges—including appellate judges who frequently had to reverse him or remove him—even honored him.

There are two other troubling explanations for Real’s longevity. First, in these highly politicized times, we have the bad habit of conflating ideology—Real was a liberal—with character. Second, the American system provides no practical way to remove people who violate norms and abuse their power, be they federal judges or—as the news demonstrates every day—the president of the United States.

Even after his death, those who know better won’t challenge Real. If you’re expecting judges to protect us from tyrants, you’re likely to be disappointed.