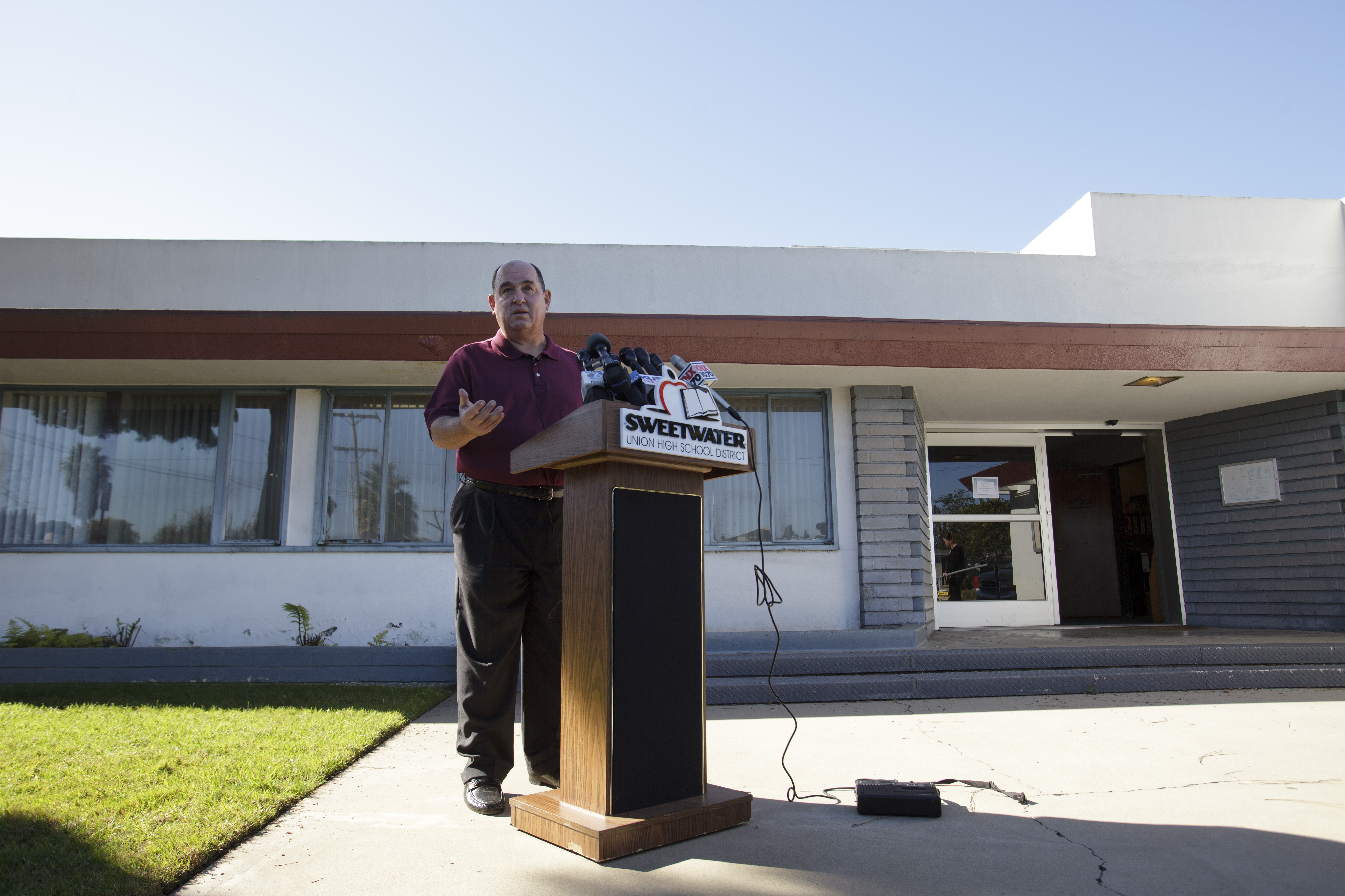 The Sweetwater district has struggled for decades. In 2012, then-Superintendent Edward Brand spoke at a news conference about bribery charges prosecutors had filed against other school officials. Courtesy of Gregory Bull/Associated Press.

And while some kids succeed in Sweetwater schools, this border district is flunking the very basics of school administration, with phony budgets, questionable borrowing, and unsustainable union giveaways that now threaten student services and teachers’ jobs. Indeed, Sweetwater’s record is so egregious that it should make California rethink how it intervenes with failing local governments.

In many ways, Sweetwater is emblematic of California—a full 87 percent of its students are racial or ethnic minorities and it has working-class demographics, with 40 percent of students qualifying for free and reduced lunch. But the other thing that makes the district emblematic is its sorry finances; like too many school districts around the state, Sweetwater is in fiscal peril.

Most California school districts are in a serious, but peculiar, financial bind. Their revenues are way up, as the economy grows and the state devotes record amounts to schools. But school districts’ costs are rising even faster than revenues, in part because of exploding expenses for employee and retiree benefits.

In Sweetwater, income has risen a healthy 37 percent in the past five years—but benefits costs, including pensions, have doubled over the same period.

But Sweetwater’s problems run even deeper than those of most other districts, for reasons Californians should find profoundly unsettling. Sweetwater’s mismanagement goes back so many years that no one can point to its exact origins. These recurring episodes have mixed incompetence and corruption, bribery and bogus budgets. The fact that most of this misbehavior went largely unchecked for so long begs the question if other school districts are hiding similar problems.

While Sweetwater leaders have acknowledged financial and management difficulties going back decades, only in the last year has the district been called to account. San Diego County’s Office of Education has effectively taken over its finances, and reports say that state and federal authorities are investigating. The resulting budget cuts—so far limited to after-school programs, technology, and bus routes, but likely to deepen—have some students threatening walkouts.

But none of the oversight, investigations, or potential strikes are likely to be enough to fix the district’s schools. Indeed, Sweetwater’s persistent problems argue for creating a strong process to terminate government entities that can’t seem to govern themselves.

Sweetwater is in some ways an artifact of a very different time. It was founded in 1920 to fund modern local high schools for children living amongst the lemon groves of southwest San Diego County.

But the area grew, through waves of industry, military expansion, and housing development. Today, Chula Vista—where the district is headquartered—has more than 271,000 people, making it the 15th most populous city in California. Sweetwater now has 30 campuses, including 14 high schools, as well as a robust adult education program. It’s known for its champion academic decathlon teams and for a compact with San Diego State University that makes it possible for more students to attend college.

But the larger district has struggled mightily to manage itself. For the past two decades at least, Sweetwater has drawn scrutiny for questionable decision-making. A series of property transactions during the 2000s went south, and at the beginning of this decade, a massive bribery scandal resulted in charges against some district leaders and Superintendent Jesus Gandara went to jail.

A 2014 election produced a new group of district board trustees who pledged reform, but they have made little progress. In 2015, the state warned the board of future budget problems, particularly as student enrollment leveled off in the district—to no avail.

Last year, the county effectively took over fiscal control of the district. And the state’s Fiscal Crisis and Management Assistance Team (FCMAT), which intervenes in troubled school districts, investigated. In a report released just before Christmas, it showed that Sweetwater’s budget was riddled with mistakes (302 false entries), suggesting systematic fraud.

For four months during the 2017-2018 school year, the district reported payroll spending of $0, according to the report; the district was surviving only through legally dubious borrowing from its construction funds. Sweetwater ignored auditors and repeatedly overestimated enrollment and state funding. As a result of all these failures, the district has spent tens of millions of dollars more than it reported, leaving it in debt.

But none of the oversight, investigations, or potential strikes are likely to be enough to fix the district’s schools. Indeed, Sweetwater’s persistent problems argue for creating a strong process to terminate government entities that can’t seem to govern themselves.

To read the FCMAT report is to understand that the district is not merely broke, but fundamentally unable to do the basic work of managing itself. The notion that it can carry out a plan to dig itself out of the current hole is ridiculous.

Even worse, the district’s leaders—in administration, on the board, and in its powerful teachers union—seem so oblivious to their collective failure as to make one wonder what they’re drinking in Sweetwater. In recent years, despite its financial troubles, the district ramped up hiring of central office staff, granted union employees across-the-board raises that it couldn’t afford, and approved an expensive and unnecessary early retirement plan.

Such irresponsibility condemns teachers to unnecessary layoffs and students to cuts in services. But rather than grapple honestly with the problem, Sweetwater resists the county and offers increasingly pitiful defenses. The most pitiful one, offered by district officials and union leaders, is this: Sweetwater has been mismanaged for so long that it’s somehow unfair to hold today’s district officials accountable for its current crisis.

To the contrary, Sweetwater’s long-standing failures suggest that California’s approach to failing districts should be more aggressive. On its current path, Sweetwater will endure years of cuts to schools as the county tries to pressure the district administration to remake itself. If Sweetwater doesn’t recover, it might need a state takeover before its local administration is restored.

But there is no guarantee that Sweetwater will be any better managed after these interventions, even if they’re drastic. And why bother spending precious time fixing a district and an administration that have failed for so long?

There is a better—and permanent—solution: The state should eliminate Sweetwater as a separate district.

The district could be used to establish a new procedure: a death penalty for local government entities that can’t manage themselves. In a state barnacled with thousands of local governments, many of which struggle with basic management, a process of closure and consolidation is desperately needed.

Sweetwater’s schools and students would still be around, but they would be relocated to districts with more administrative capacity. The natural landing point for Sweetwater schools would be San Diego Unified School Distract, since Sweetwater already serves some communities in the city of San Diego. Such a switch would make education in the Sweetwater Valley the responsibility of all of greater San Diego.

This would require politically difficult local action and state legislation. But Sweetwater is one border crisis that the state of California can’t blame on President Trump, and has the power to solve itself.