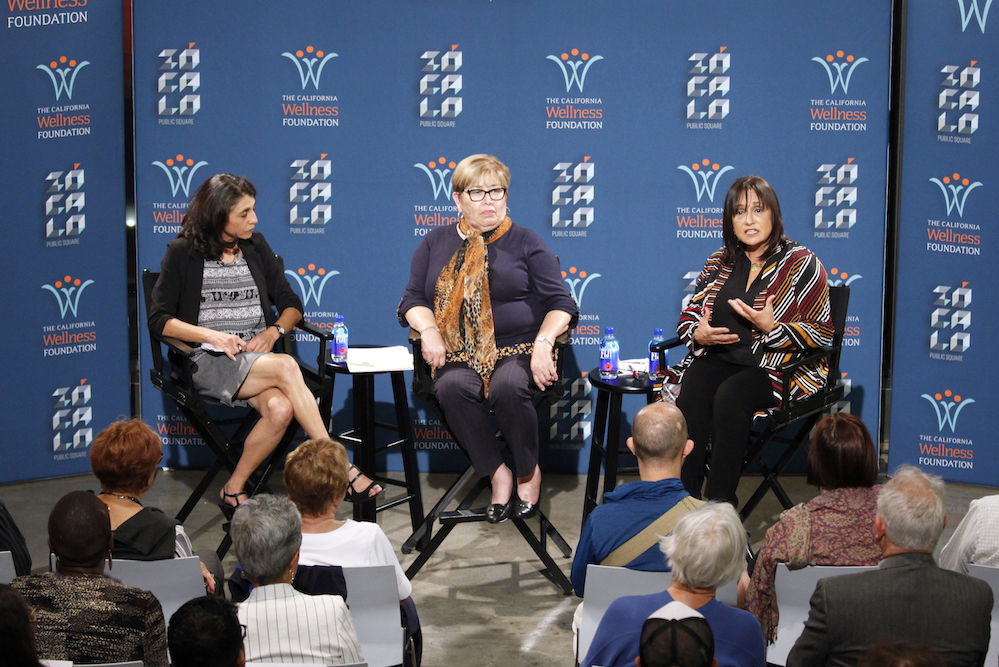 Immigrants have been a force for change in the American healthcare system—as doctors and nurses who provide essential health services, and as patients whose needs have prompted hospitals and clinics to be more creative and responsive, said speakers at a Zócalo/The California Wellness Foundation event.

The program, “How Are Immigrants Changing the Way Health Care Is Practiced?” drew from a recent Zócalo Inquiry and ranged widely over the intersections of immigration and healthcare: from the need to license more foreign-trained doctors in the U.S. to the ways hospitals are adapting to the cultures of patients.

Before a full house in The RedZone at Gensler, California News Editor and Columnist at Kaiser Health News Emily Bazar, the event’s moderator, listed the various medical professions in which foreign-born people represent one-fifth or more of practitioners, from dentists, to pharmacists, to home health care aides.

“Pay attention to that last one [home health care aides], in particular,” said Bazar, who noted that her own parents are from Iran, and one worked at a Southern California hospital. “The country’s largest generation is retiring,” and the need for the foreign-born in health care is thus likely to increase; home health care is one of the fastest-growing professions in the country.

Panelist Michelle Bholat, co-founder and executive director of the UCLA International Medical Graduate Program, said that the U.S. has a long history of relying on foreign-born doctors to go into rural and other areas where American-born doctors are scarce. And she noted that foreign-born doctors represent a disproportionate share of America’s primary-care doctors, since physicians trained here often prefer to become specialists.

Bholat’s own program at UCLA helps foreign-trained physicians, many from Latin America, transition into practice in California; graduates of the program agree to practice for a time in underserved areas. She said that such internationally trained doctors are sometimes looked down upon, but they are vital and are making health care better, and often are more sensitive to the needs of patients who are also immigrants.

“Diversity is what builds the best and the brightest among us,” she said.

Bazar pointed to research by the UCLA School of Medicine’s Yusuke Tsugawa, a scheduled panelist who was unable to attend because of a medical emergency, showing that there was only a negligible difference in mortality rates between patients of foreign-trained internists and American-trained internists. (And indeed, it was the patients of the foreign trainees who did a little better). Tsugawa’s research attributed this to self-selection, Bazar said; the doctors who make it to the U.S. are often the cream of the crop.

Another panelist, Pilar De La Cruz Samoulian, a nurse who is former director of the Central California Center for Excellence in Nursing, added that a 2003 report from the Sullivan Commission on Diversity in the Healthcare Workforce showed that outcomes were better for patients who were cared for by health care professionals of their own culture.

The trouble, she said, is that non-whites are underrepresented in the health care professions; in California, she added, there are relatively few Latino nurses despite a patient population that in many places is 50 percent Latino. She said a school counselor had discouraged her from being a nurse—“my counselor said, ‘You’re poor, you’re Mexican, you’re going to be a secretary.” De La Cruz Samoulian gave up a scholarship to study business so that she could pursue nursing.

She said she is glad she did, because having people who know a patient’s language and culture is essential. “We had an incident with a patient who had to get an amputation,” she recalled. Instead of calling for a qualified interpreter to work with the patient, the hospital found another Spanish-speaker on the floor, who didn’t know the Spanish word for amputation. The patient was told only that he was going to have surgery on his arm—and was surprised to wake up without the limb.

The combination of immigrant health care providers and immigrant patients has brought change. De La Cruz Samoulian said that the nutrition department at her hospital had learned to make a soup that Hmong women are given after childbirth. She had to push a heart hospital to add Univision as a channel. A Filipino nursing assistant also taught her to open windows in a room after a Filipino patient died—“so the spirit can go out.”

She also has learned to be alert for cultural conflict. “You never want to put an old Armenian lady in the same room as a Turkish lady,” she said, “or you’re going to have a battle on your hands.”

Instead of calling for a qualified interpreter to work with the patient, the hospital found another Spanish-speaker on the floor, who didn’t know the Spanish word for amputation. The patient was told only that he was going to have surgery on his arm—and was surprised to wake up without the limb.

Bazar suggested that the Trump administration’s immigration policy could challenge progress in health care. She noted that the federal government is trying to install a “public charge” rule that would make it harder for people to achieve lawful permanent residency status if they had used a public program like Medicaid. She also pointed to the administration’s announcement that it would force people seeking to enter the country to prove they could pay for health insurance on their own.

The panelists said they were worried that such policies would hurt not only patients, but also reduce the pipeline of people who come to the country and join the health care workforce. Bholat said she had already seen a decline in foreign-trained doctors applying to her program, and De La Cruz Samoulian said that fewer people are coming to mobile health clinics offered via Fresno State “because of the fear of being deported, of ICE being there.”

Audience members pressed the panelists about political and policy matters, from universal health care, to equitable pay, to the influence of non-traditional and non-Western medicine. In response to questions, De La Cruz Samoulian argued for better pay for admitting clerks, who collect vital information on which patient outcomes often depend. She also nodded to a role for non-traditional cures. She credits her own father with improving her first child’s health with the ritual of “susto,” or fright.

In response to a question about how to get immigrant providers to play a bigger role in public conversations about immigration and health care, the panelists argued for organizing and advocacy. De La Cruz Samoulian pointed to a minority nursing conference in Fresno that has pushed for more minority health care providers, and Bholat said a physician who has status under DACA and whose parents are from Thailand has begun an aggressive effort to push for immigration reform, citing the vital roles that migrants play in health care.

Just before the event’s close, Judy Belk, president and CEO of The California Wellness Foundation, asked the panelists for talking points: how would they respond to those who argue for a focus on providing pathways to the medical field to native-born Americans, rather than to immigrants? In response, Bholat said that we should emphasize that this is a country of immigrants, and that taking care of the health of a big and diverse country requires immigrants, who become Americans.

“I believe in simply saying, ‘These are Americans too, and they are here to provide service,’” she said. 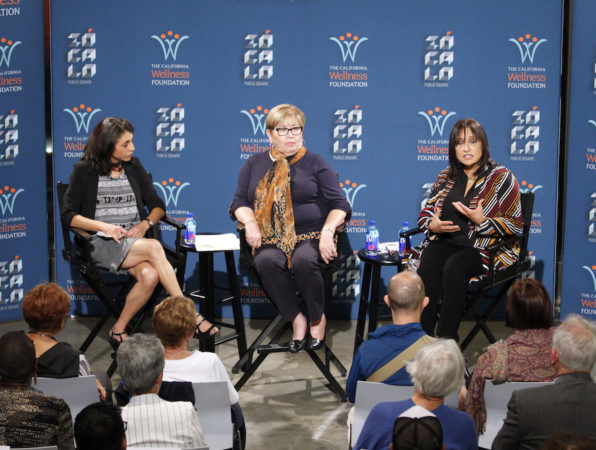 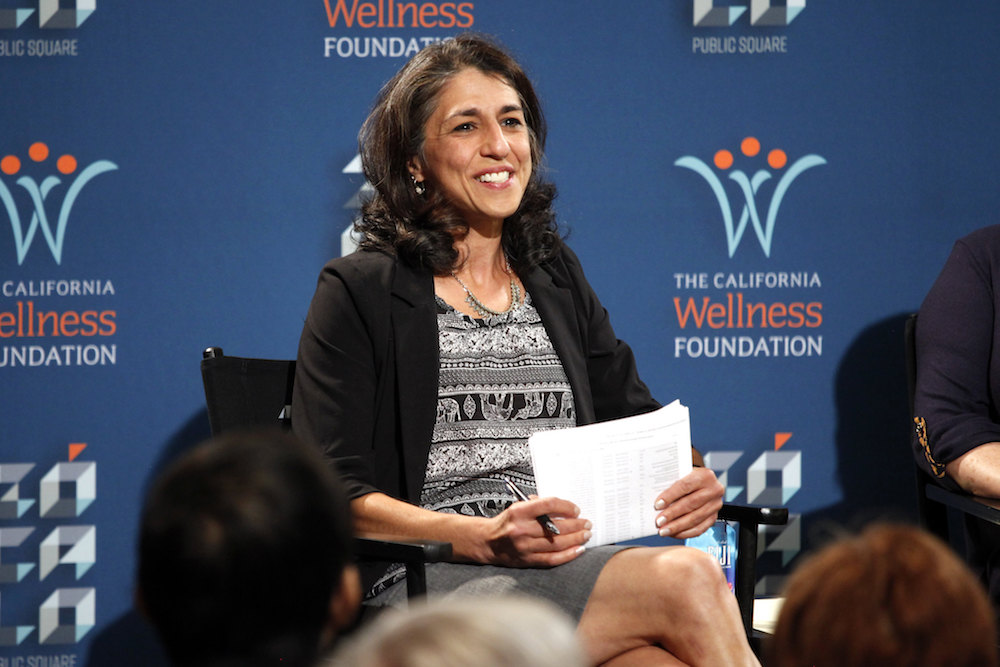 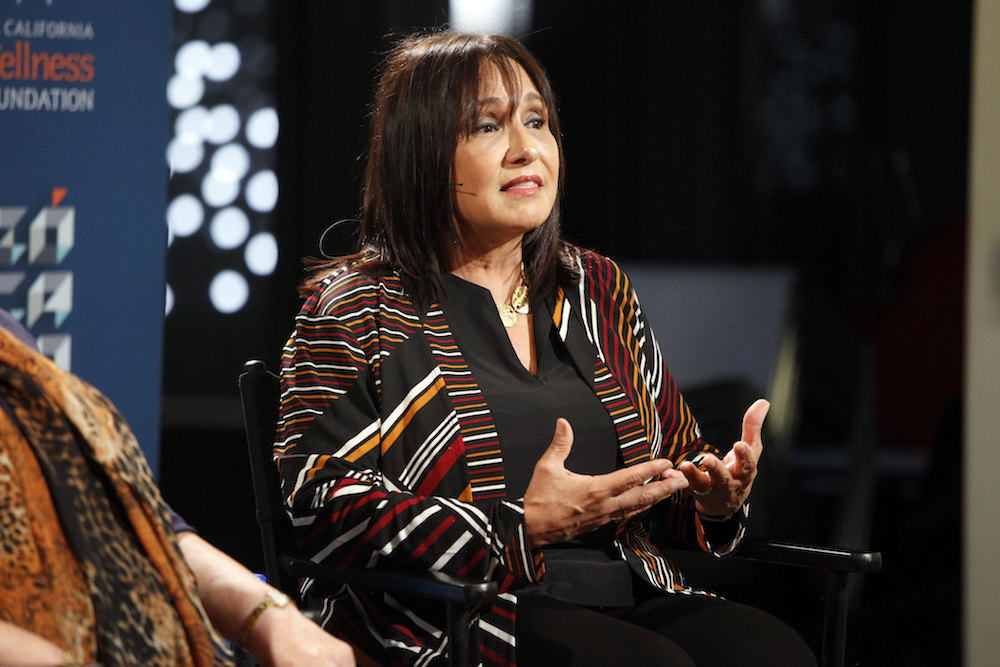 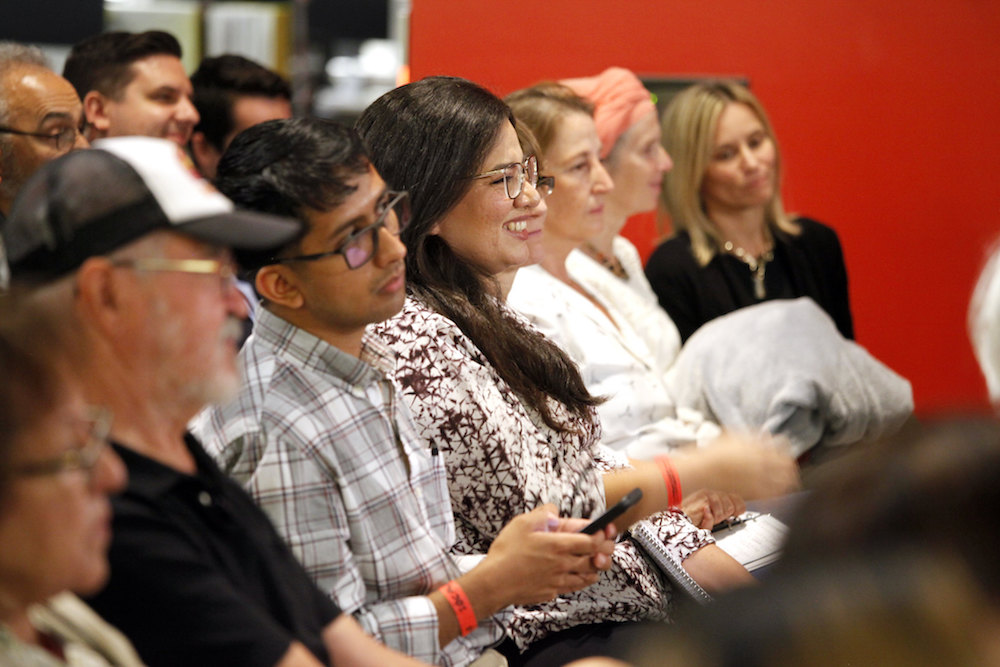 A full house in The RedZone at Gensler, downtown Los Angeles 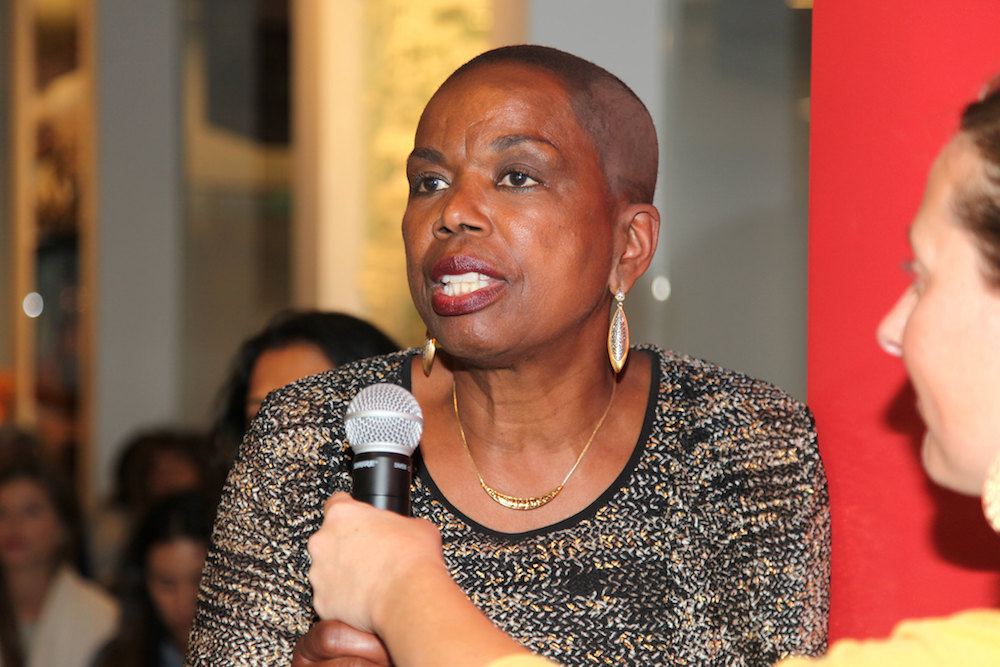 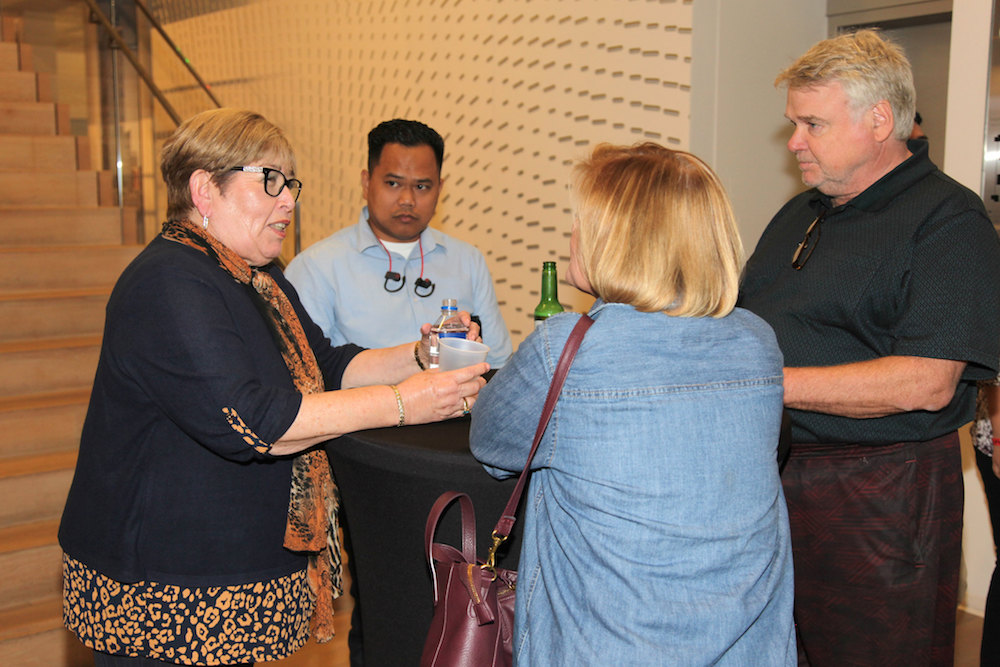 Pilar De La Cruz Samoulian, former director of the Central California Center for Excellence in Nursing, talks with event guests at the reception.