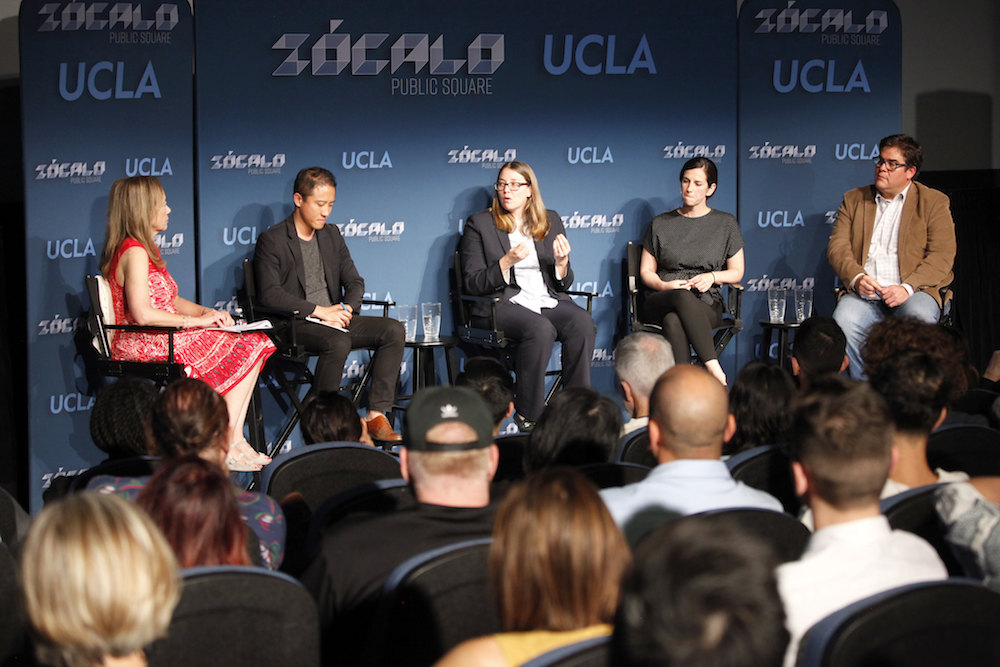 Establish a relationship with a homeless services provider in your area. Don’t be afraid to engage homeless people, and be sure to listen to them. If you give money or your time, make sure your donation reflects what homeless people say they need, not what you think they need.

And most of all, treat the people you encounter on the streets as your neighbors—because they are.

These were just a few of the suggestions at a Zócalo/UCLA Downtown event titled, “What Can Everyday Angelenos Do About Homelessness?” Before a full house at the Downtown Independent on Main Street in Los Angeles, a panel of experts who study and serve unhoused people sought to correct misperceptions that make people fear their homeless neighbors. They also urged people in Los Angeles to channel their frustration into engaging with homeless people in ways that address real needs—and even to attack the economic, criminal justice and health systems that contribute to producing homelessness in the first place.

It is perhaps most essential, panelists said, that our responses to homelessness be flexible, because homeless people are not all the same. And many common assumptions—that they are all mentally ill, or that they don’t have jobs—are false.

California Policy Lab at UCLA director Janey Rountree, who is also a member of the National Alliance to End Homelessness Research Council, said that 80 percent of homeless people in L.A. County have a work history in California, and one in five homeless people are currently working. She and other panelists also noted that most homeless people live unhoused in the same areas where they once had housing.

And people can become homeless in in many different ways and for many different reasons—in one case in Rountree’s research, an unpaid parking ticket was the trigger.

“It’s a very diverse group of people,” she said. “And the one thing they have in common is deep, grinding poverty.”

Rountree said that, as a resident of Hollywood, she will often walk past an encampment with her small child, and “I believe it’s totally safe to do that.” But she also talks with her child and neighbors about what is happening, and she makes a point of knowing the service providers in her neighborhood, touring their facilities, and asking what they need.

When she herself posed that question, a homeless services provider in her neighborhood told her, “‘I want people to show up once a week and have a conversation with homeless people at our coffee hour,’” Rountree recalled. She added that if you’re not as comfortable with volunteering or direct engagement, you should educate yourself on state and local efforts to address housing and homelessness, and push your elected representatives to focus on solutions.

The event’s moderator, Los Angeles Times editorial board member Carla Hall, who has reported extensively on homelessness, pressed the panelists for specifics about what people can do when they encounter homeless people. Should they provide food, or water, or money? Hall herself said she gives money to homeless people, even though acquaintances sometimes warn her that it won’t be spent on the right things—whatever that means. “I ask them, ‘What do you want them to do, put a down payment on a condo?’” she said.

In response to Hall’s queries, Christine Margiotta, executive director of Social Venture Partners Los Angeles, replied: “The first thing is to acknowledge their humanity. Let them know that we see them” because homeless people often feel invisible.

But Margiotta also argued that Angelenos must go beyond everyday engagement, and work to change systems. Employers must pay wages high enough for workers to afford housing. Society must confront racism in criminal justice, which is reflected in a homeless population in Los Angeles that is one-third African American, even though just eight percent of the county’s overall population is, she said.

UCLA sociologist Randall Kuhn, who co-founded the UCLA Transdisciplinary Homelessness Research Initiative, said our desire to avoid engaging with homeless people is natural—and that our frustration is understandable, since declarations of a homelessness “emergency” and the passage of ballot measures to support housing and homeless services don’t solve the problem.

When she herself posed that question, a homeless services provider in her neighborhood told her, “I want people to show up once a week and have a conversation with homeless people at our coffee hour,’” Rountree recalled.

But frustration and avoidance are wrong-headed, he added. Kuhn argued that while homelessness may be shocking here—where we have an expectation that everyone will be housed—homelessness and encampments are common around the world. Noting his own research on health programs and migration in Bangladesh, he said people there form informal slum settlements for the same reasons people do in L.A.: to protect and help each other.

“When people are forced to live on the street, they will naturally congregate,” he said.

Kuhn said that in order to do more to help unhoused people, we need a greater understanding of homelessness—both from research (there are not nearly enough studies on those who don’t go to shelters), and from thinking more about how vulnerable and exposed you can feel if you’re homeless.

“Imagine someone was in your living room and watching everything you did … every fight with your spouse, every time you talked to yourself, everything you drank. You would be humiliated no matter what they saw,” he said.

Chris Ko, Managing Director of Homelessness and Strategic Initiatives at United Way of Greater Los Angeles, said that homeless people can feel both intensely visible and invisible at the same time. When unhoused and housed people encounter each other, “understanding that the dynamic is awkward for both of us is important to remember.”

Ko said we must recognize that homelessness affects all of us, even if we’re just driving by, because “It’s a reminder to us that that could happen to any of us … If you mess up, if you’re perceived as messing up, there’s a version of that where we throw you away on the street.”

One way to respond to the stress that we feel in encountering homeless people is to help, Ko and other panelists said. Ko argued not just for engaging with people on the street, but also for finding ways to give time and money for flexible purposes. For all the funding now devoted to some homeless services and housing, there are expenses associated with obtaining housing—such as security deposits or furniture—for which there is little funding. You also might consider helping homeless people with their searches for apartments.

“It’s hard to move—imagine doing it without an address or a vehicle,” he said.

In response to an audience member’s question about protests against establishing shelters or bridging centers for homeless people in L.A. neighborhoods, Ko said that it’s important to listen to such objections. He also said that Angelenos often worry that bringing homeless services to their neighborhood will make it resemble Skid Row, where there are 2,000 beds on one block, and a lot of shelter residents empty out onto the street at about the same time in the morning. In the bridge facilities now being proposed for and built in neighborhoods around the city, there are only 50 to 75 beds, and people stay inside for longer periods of time, with more care and support.

In response to a question about negative media coverage of homeless people, Kuhn, the UCLA sociologist, encouraged people to engage with those who spread misinformation about homeless people on Nextdoor and other social media outlets.

Another audience question involved whether universal basic income could address homelessness; Rountree said she wasn’t sure, but that research suggests that one-time or short-term cash assistance to unhoused people can make a huge impact.

“Be very flexible,” she advised in addressing homelessness, adding: “I really resist the idea that there is one solution.” 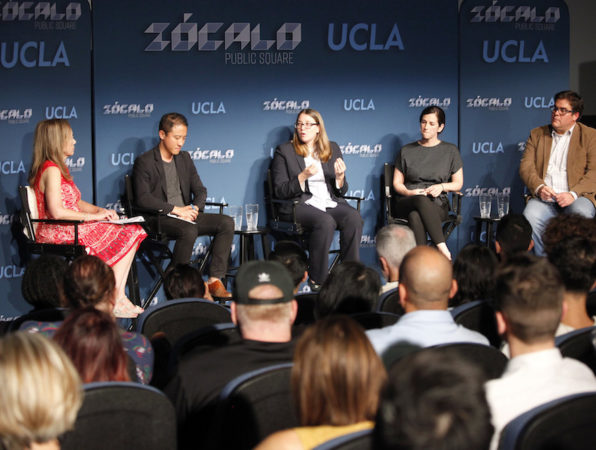 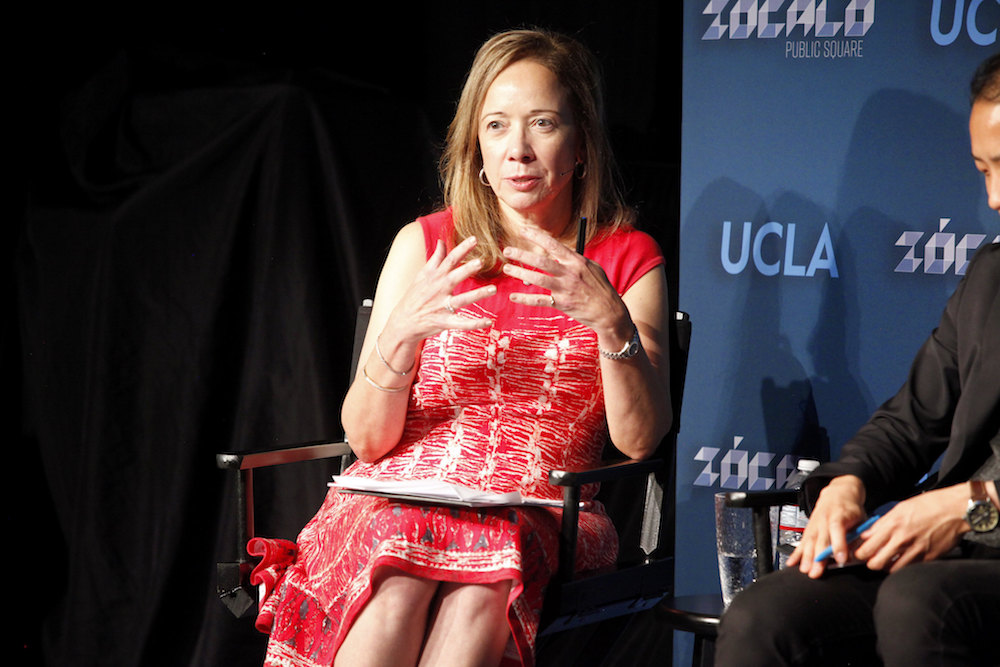 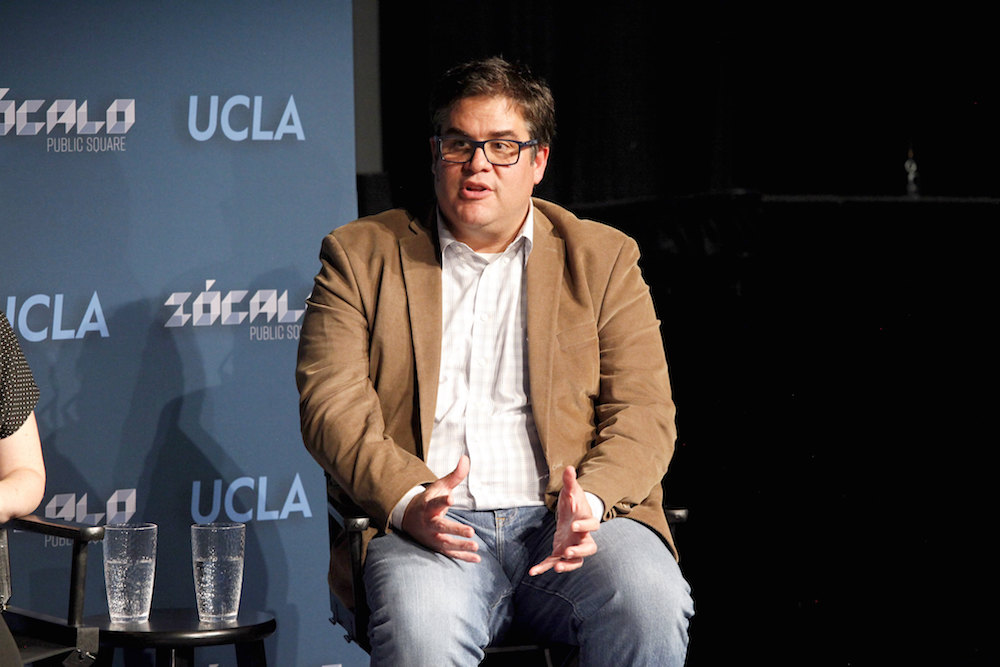 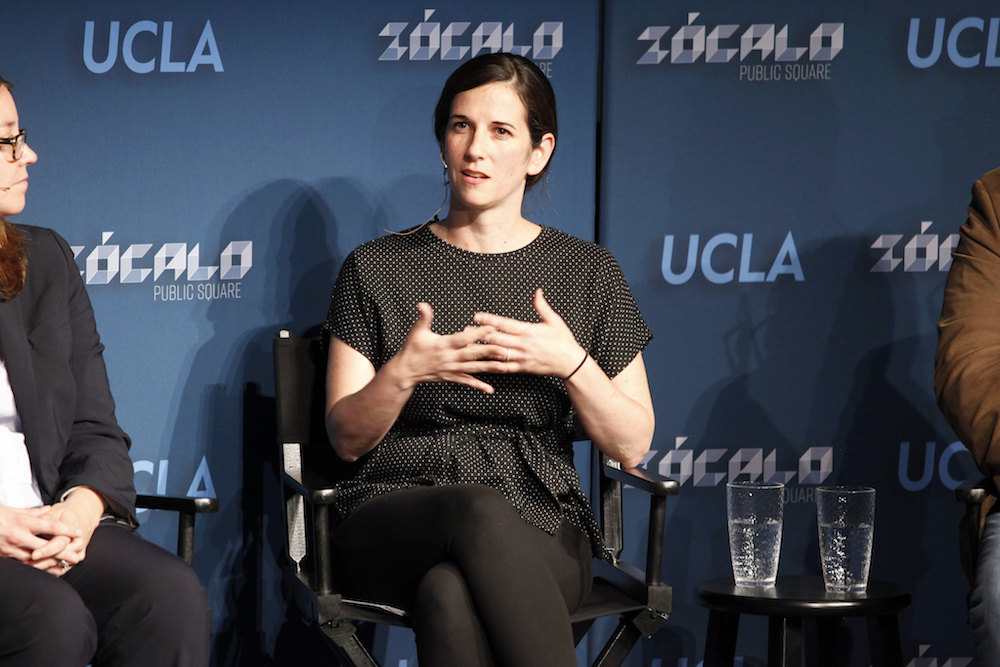 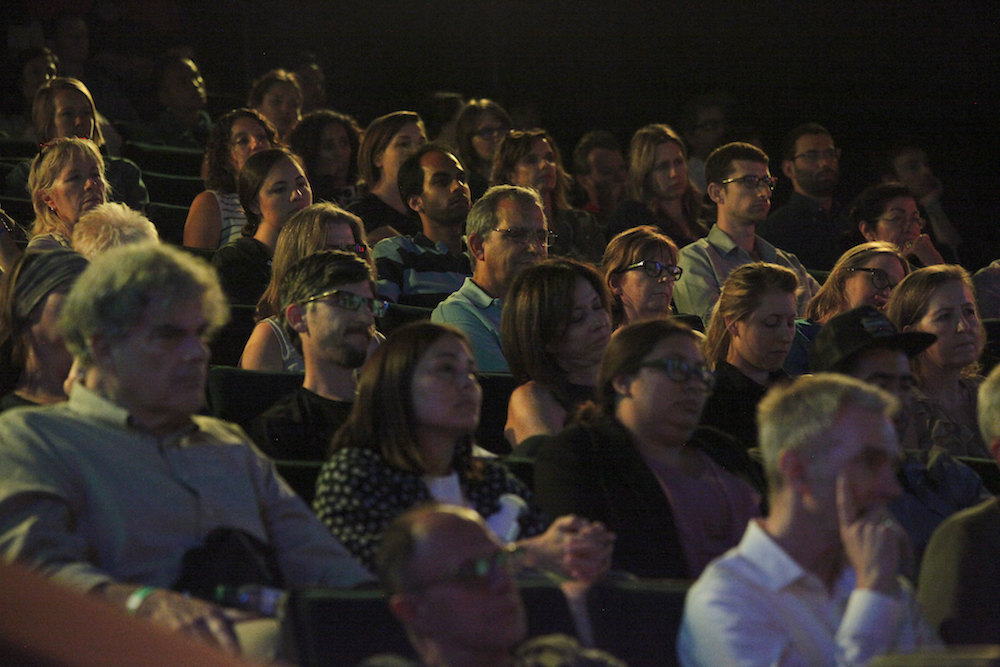 A full house at the Downtown Independent in Los Angeles 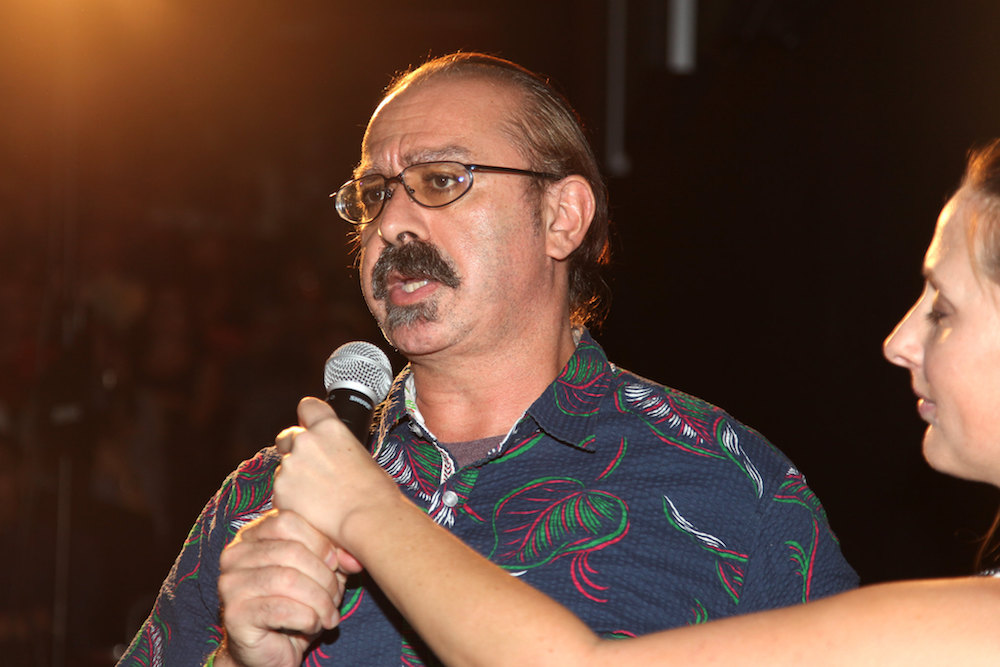 An audience member asks a question 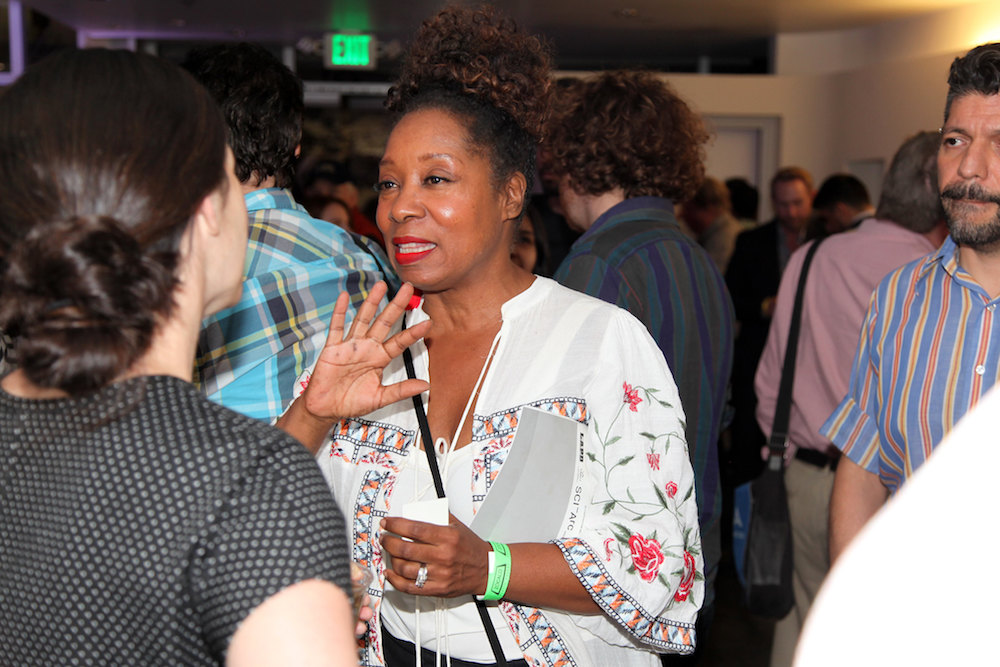