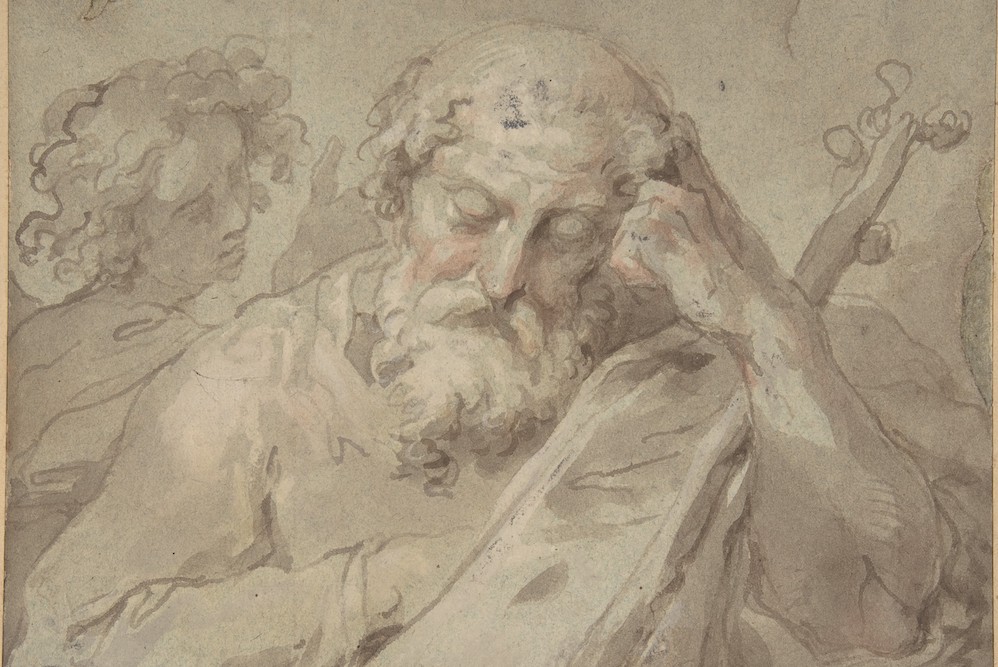 The Dream of Saint Joseph, an 18th-century Italian drawing by an anonymous artist. Courtesy of the Metropolitan Museum of Art.

In other words, are we ready for a president named Joe?

Former Vice President Joe Biden is often described in campaign coverage as a safe, traditional choice among Democrats. That’s profoundly wrong. Sure, Biden does not have to confront centuries of American patriarchy like Amy Klobuchar must, or overcome the deep structural racism that faces Andrew Yang. But Joe Biden does have the entire weight of American political history against him.

This country has never had a president named Joe. Nor has any major political party ever dared to nominate a Joe. In fact, the most definitive thing you can say about Biden, whose policy positions have changed dramatically over the years, is that he is the only Joe ever elected vice president.

Here in California, we’ve never even had a governor who went by the name Joe. While one recent state chief executive had Joseph as his legal first name, he wisely hid that fact and presented himself to the public by a comparatively more exciting nickname: Gray. And is it just a coincidence that Joseph Graham Davis is the only California governor ever recalled from office?

Why is the name Joe such a public burden? As someone who has chafed under the name for 46 years (it could have been worse—Mom originally wanted to name me Duncan), I have a theory that might sound like a paradox.

Joe is simply too relatable a name—too common, and too average—to ever command the respect necessary for elevation to the highest office in the land.

That may seem like a strange thing to say, since politicians spend considerable time trying to seem like they are one of us. But that is a pretense built on the falsity of almost all American populism. For all our claims that anyone can become president, we Americans consistently elect people to high office who seem greater than us—richer, smarter, tougher, more accomplished, better-looking.

The United States does not make Average Joes its presidents. We vote aspirationally, wishing we could be as deft with words as Bill Clinton, as cool as Barack Obama, or as good at getting away with bad behavior as Donald Trump. (Unfortunately, this ability to fly above the usual rules and limits of life remains a very male form of privilege, which may be another reason why American has yet to elect a woman.)

The name Joe is weighed down by its association with the everyday American man. When a regular guy goes to university, he is Joe College. If he joins the Army, he is G.I. Joe. And when he does his duty in the voting booth, he’s Joe Citizen. The name Joe represents the middle-class, the middle-brow, and the middle-of-the-road. Those are all categories that are shrinking in a country divided between rich and poor, and politically polarized between a hard left and a harder right.

America’s abandonment of the middle has left us Joes resentful, and our political elites expertly use populism to play upon our resentments. It’s no coincidence that, in 2008, the populist savant Sarah Palin turned a working-class Ohio man whose first name was Samuel into the campaign character Joe the Plumber, who embodied middle-class grievance. The Republicans understood that the power of Joe lay in his perceptions of his own powerlessness.

Indeed, we can be dismissed as nobodies—Joe Blow or Joe Schmo. And we’re not anybody’s idea of health and fitness. Joe Sixpack did not get that name because of his abs.

And in our era, Hollywood, bent on removing any doubt that we Joes are less than fully manly, broadcast the reality show “Average Joe.” In it, ordinary Joes competed to win the heart of a beauty queen—until more handsome and appealing non-Joe suitors were introduced. Inevitably, one of these latecomers would get the girl.

After all this cultural conditioning, the name Joe now carries a bunch of baggage: we Joes are not particularly distinguished. Indeed, we can be dismissed as nobodies—Joe Blow or Joe Schmo. And we’re not anybody’s idea of health and fitness. Joe Sixpack did not get that name because of his abs.

That is not to say that the name Joe is powerless. For one thing, a huge body of research shows that our names influence the jobs we get, where we live, and whom we marry. There’s even a scientific term for the phenomenon—nominative determinism.

According to the Oxford English Dictionary, the idea of Joe representing the commoner dates back until at least the 1830s. And the name is way more Old Testament than that. Joseph—Yosef in Hebrew—earns a big role in the book of Genesis for getting sold by his brothers into slavery in Egypt and then imprisoned. Eventually he gets a break interpreting dreams for Pharaoh, and ends up as the second most powerful official in the Nile region.

Politically, it’s been downhill for Joes ever since. The New Testament Joseph takes a backseat to his wife and child, because, after all, he isn’t Jesus’ real father. While versions of the name Joseph are common in much of the world—Giuseppe has often been the most popular name in Italy—its associations with leadership also involve ghastly villains like Stalin and Goebbels.

In the U.S., the name has fallen out of fashion. Today you’ll encounter legions of Liams and Logans before you’ll bump into a Joe. And if you’re asking for Joe, you’re likely to be served coffee, and of an average kind. We Joes don’t even amount to a latte.

Only in sports do American Joes get celebrated—the quarterback Joe Montana, the boxer Joe Louis, or the ballplayer Joe DiMaggio. But when Simon & Garfunkel musically called Joltin’ Joe to national leadership—”our nation turns its lonely eyes to you”—DiMaggio couldn’t be found.

Despite the name’s reputation, there are real advantages to being named Joe. I’ve always appreciated the low expectations. I never feel like I have to be the most brilliant or charming person in the room, and I can show up late or underdressed to any party, because “that’s just Joe.”

But in politics, being a Joe is a pickle. And Vice President Biden is a classic Joe. He’s dependable, relatable and likable. But we’re also told by the commentariat that he’s too small for the presidency—he’s not brilliant enough, not tough enough, not progressive enough. The conventional wisdom is that if we picked this Joe as president, we would be settling for average.

What can this Joe do to overcome his Joe-ness? W.C. Fields—yep, that’s a reference as dated as Biden—famously advised, “It ain’t what they call you, it’s what you answer to.” So maybe it’s not too late for a change. Biden could pick his middle name Robinette, and start going by Rob.

Or maybe he can hope that this country has finally tired of being exceptional and dramatic, and is now willing to embrace the boring and the steady. But this Joe wouldn’t bet on it.

Sad to say, Joe Biden can’t even count on solidarity amongst his fellow Joes. I, for one, think Biden seems behind the times. I’m way more impressed with Elizabeth Warren.