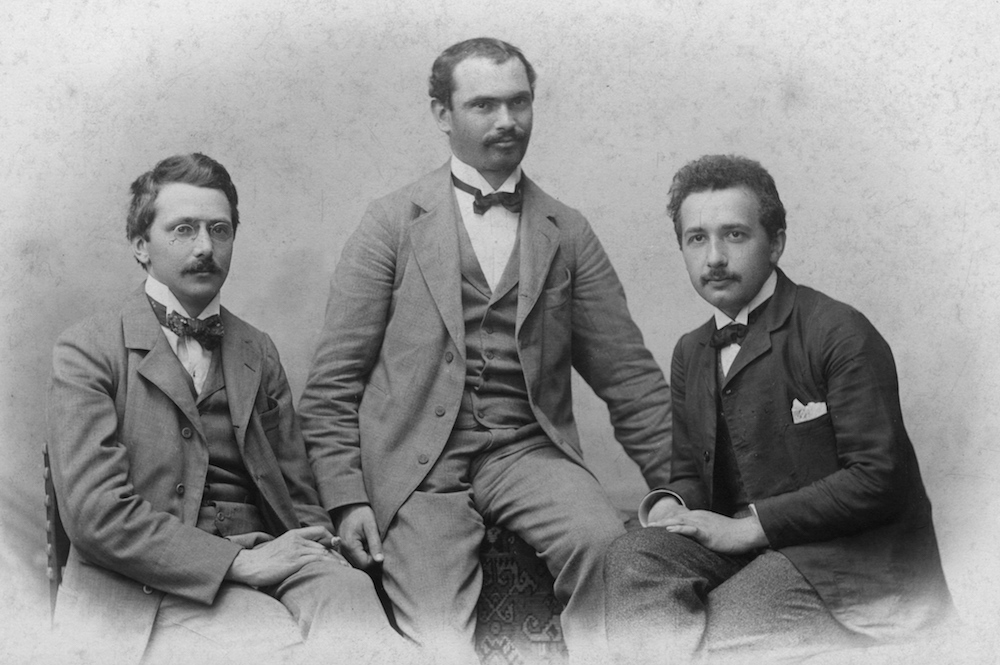 Einstein (center right) got by with a little help from his friends. Courtesy of Wikimedia Commons.

In 2017, the “Genius” issue of National Geographic credited Albert Einstein’s ability to harness the power of his “own thoughts” to predict gravity waves, a century before gravity waves were detected using highly sophisticated technologies. Does this prove that Einstein really was, as many have claimed, the “genius of all geniuses?”

Einstein and his brain are iconic objects—a sacred scientific hero and a sacred relic––but thinking differently about him now can help us revise outdated ideas about genius and about ourselves. There are several reasons to question Einstein’s genius: First, the very idea of “genius” has come under critical scrutiny in contemporary research on creativity. Second, a new view of the social basis of creativity has emerged in the last quarter century; new ideas are created in social networks, not in individuals or individual brains. Third, the idea of a biological brain is being superseded by a new paradigm that sees the brain in a social context. It has become increasingly clear in the life and social sciences that humans are the most social of the social species. We can now say with some confidence that the “I” is a grammatical illusion. We all, as Walt Whitman claimed in Song for Myself, contain multiples; the self is a mosaic, not a unitary ego, in a scientific sense as well as a poetic one.

This doesn’t challenge the uniqueness of Einstein and his achievements but it does change our understanding of that uniqueness.

When we identify Einstein as a genius, we learn more about ourselves and our culture than we do about Einstein. The term “genius” rests on the concept of the individual as an entity that stands apart from society, history, and culture—even outside of time and space. Culturally, genius is also gendered and divinely inspired—so to meet a genius is to meet a male god. The element of the male divine spins the genius right out of the world into a sacred space. It sets Einstein and his brain apart from the rest of us.

In the real world, there is no such thing as the lone wolf genius. Every genius, like every person, is a social network. And every genius stands on the shoulders of a social network, not the shoulders of giants. For the commonly accepted concept of “genius” to be meaningful it would have to be rooted in genes, neurons, or both. In that case, geniuses would appear at random and scattered across intellectual and cultural landscapes. On the contrary, the most comprehensive studies of genius by social scientists have demonstrated that geniuses do not appear at random. Instead, genius clusters.

The fact that creative acts and actors cluster was recognized in the ancient world. Modern research shows that creative clusters appear predictably during times of rapid decline or rapid growth within civilizations. We also know that new ideas, theories, and technologies emerge simultaneously in different places in the same cultural neighborhoods and share a family resemblance. The particular version that prevails and the person or persons who get credit for the innovation hinges on negotiation, politics, public relations, personalities, connections, and in some cases (take, for example, the electrical engineer Nikola Tesla) the outcomes of patent disputes.

The notion that Einstein’s “own thoughts,” were responsible for his insights into gravity waves ignores his collaborations with Michele Besso and Michael Grossman during the construction of the general theory. It was Grossman, for example, who helped Einstein with the geometry and the concept of tensors he needed to formalize the theory. In the same way, the portrait of Einstein as a lone wolf patent clerk who published the revolutionary 1905 papers leaves out a network of his influences—from Newton to Lorentz, and Poincaré to Minkowski. It also obscures the roles of his friends, teachers, and colleagues in physics, of his first wife Mileva Marić, and his math assistant Walther Mayer.

The important point is not that Einstein worked with and depended on others. It is that Einstein is those others—they are embodied in his self as a social network. When you understand all the people who went into Einstein being Einstein, does the label “genius” really help us understand him or is it merely a representation of untutored awe and worship?

Einstein and his brain are iconic objects—a sacred scientific hero and a sacred relic—but thinking differently about him now can help us revise outdated ideas about genius, and about ourselves.

What did Einstein’s genius cluster look like? Einstein’s 1905 papers came in the midst of a cultural flowering of ideas, inventions, and discoveries across the full spectrum of the arts, humanities, and sciences between 1840 and 1930. Einstein’s genius cluster in physics included such luminaries as Planck, Tesla, Marconi, Westinghouse, Madame Curie, the Wright Brothers, Emmy Noether, and Edison. The two great innovations in physics that would remain at the core of physics throughout the twentieth and into the twenty-first century—relativity theory and quantum mechanics—were born in the early 1900s.

Expanding that genius cluster to encompass music brings in such names as Sibelius, Puccini, DeBussey, Schoenberg, Stravinsky, and Charles Ives. Innovations in literature include the rise of the novel, American Transcendentalism, Realism, Stream of Consciousness, various forms of Modernism, Naturalism, the growth of children’s literature, and the Harlem Renaissance of the 1920s. There was a sympathetic mutuality that linked Cubism (represented by Picasso’s “Les Demoiselles d’Avignon,” 1907) and Relativity Theory. Both involved challenges to conventions regarding absolute time and space.

The period 1840-1930 also witnessed a veritable Copernican revolution, the emergence and crystallization of the social sciences. This period can be considered the classic Age of the Social. It ushered in the idea that we are through and through social beings.

Ultimately, by looking at the myth of Einstein’s brain, we can understand how the myth of individualism is at odds with the evolutionary reality that humans are always, already, and everywhere social. Einstein’s singular status is not a matter of genes, neurons, quantum phenomena, or the biological brain; the architecture of his brain reflected his experiences in the world, all of the social networks he encountered in his life. Since the1990s, developments in social neuroscience, studies of brain plasticity, epigenetics, and network theory have fueled the development of an explanation for Einstein’s genius—a social brain paradigm.

The idea that we have social brains arose from hypotheses about the connection between brain size and social complexity. Beginning in the 1920s and then more systematically in the 1950s, these hypotheses were explored in studies of non-human primates. Two conflicting hypotheses fueled this research: larger brains led to larger and more dense social networks; or larger and more dense social networks led to larger brains. Over time, it seemed more reasonable to hypothesize that brain size, and the size and density of social networks, were coupled in co-evolution.

All of this led to the crystallization of the social brain hypothesis, which entered the neuroscience literature in 1990. This hypothesis initially identified specific regions of the brain (including, for example, the amygdala and the insula) as “the social brain.” More recent studies suggest that the whole brain must be considered a social and cultural entity. In other words, the brain is a complex organ that originates and functions at the nexus of biological, environmental, and social forces. By the 2000s, the social brain hypothesis was finding its way into studies of autism, schizophrenia, and other classic topics in psychiatry.

The story of pathologist Thomas Harvey removing Einstein’s brain during the autopsy in 1955 is well known. However, there were no studies of Harvey’s brain slides between 1955 and 1985, and those done between 1985 and the early 2000s proved, in the end, to be sterile. The noteworthy features of Einstein’s brain some researchers identified were controversial, and many experts who studied Einstein’s brain found nothing unusual. One brain scientist said it was just an old, diseased brain. These studies were guided by the false assumption that the mind is the brain, and by an inability to “see” social life as the locus of causal forces that shape our behaviors, emotions, and thoughts.

And yet, the myth that we are our brains lives on in science, politics, and the culture. It is the basis for Bush’s proclamation of the 1990s as the Decade of the Brain, Obama’s 2013 BRAIN initiative, and comparable policy pronouncements in Europe, the Middle East, and China. Brain research remains haunted by the myth of individualism, which is at its root the myth of the brain in a vat. (The Matrix is an artistic gloss on this metaphor.) The social brain, though, proposes a far more powerful concept: Network thinking, which is capable of connecting the smallest parts, such as neurons, across multiple scales to the global network of information and communication. Don’t think of a brain in a vat, but of a connectome—in which everything from cells and neurons to neural nets, to the body, its microbiome and its organs, and to social relations and the environment are linked by a circulation of information.

It’s been 65 years since Einstein’s brain was removed during the autopsy and still the most insightful discussion of it was found not in the halls of science and philosophy, but in TV land. On July 21, 1999, David Letterman audience members were allowed to ask questions of “Einstein’s brain,” a model brain in a beaker of green gelatin. After they presented their questions, they were told that due to Einstein’s death in 1955, they were addressing dead tissue, which could not answer. This comedic vignette did more for neuroscience than all of the papers and lectures on Einstein’s brain.