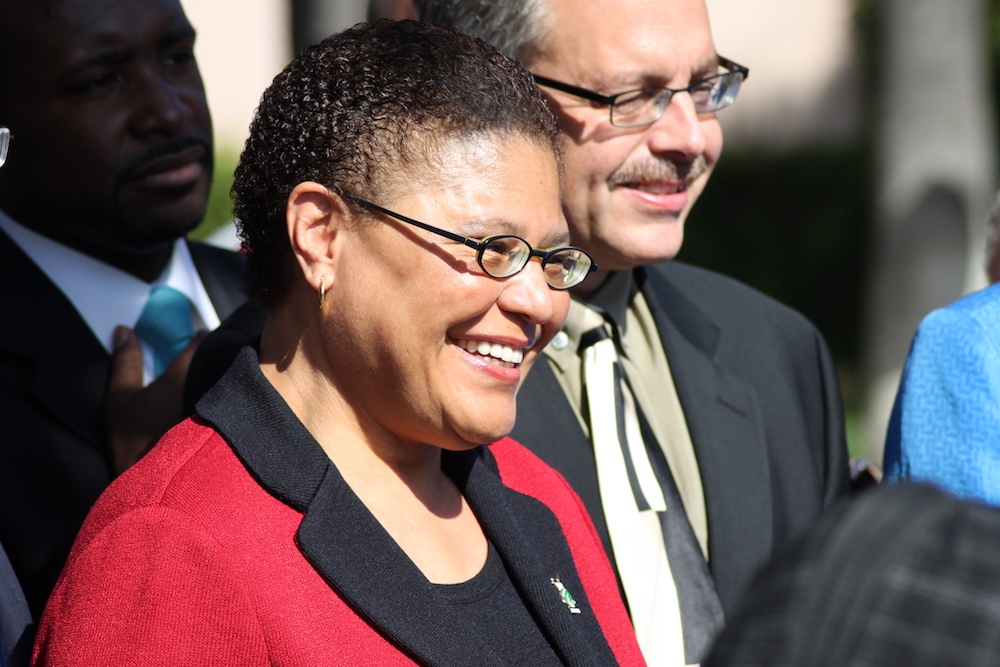 Behind the Veep contender Karen Bass is a story of transformation and leadership development that the country needs now. Courtesy of Lord Jim/flickr.

Can South Los Angeles teach America how to lead?

That’s the promising question behind the news that Karen Bass is a top contender to be the Democratic vice-presidential nominee.

Bass is best known as a consensus-building and uncommonly kind politician who has served South L.A. in the State Assembly (including time as speaker) and in Congress over the past two decades. But far more important than her political career is Bass’ role in a larger story about South L.A.’s transformation over the past 30 years—and about what true leadership looks like in the 21st century.

South L.A., with 850,000 people covering 50 square miles, is the size of San Francisco; it’s also the last great working-class place in coastal California. And at the heart of its complicated story of improvement is Community Coalition.

Bass and other neighborhood activists helped start Community Coalition in 1990 amid the crack-cocaine epidemic. Since then, CoCo’s staff and many members have built it—through painstaking, block-to-block work that rarely gets media notice—into one of California’s most successful institutions.

From afar, CoCo might seem unfocused. It works on an incredibly broad array of issues, from trash clean-up to college access to drug treatment. But that’s because it organizes around the varied concerns of South L.A.’s diverse residents, not a poll-tested political agenda. The wonderful paradox of CoCo is that its focus on street-level organizing has made the organization extraordinarily successful in developing leaders for the city, the region, and the nation.

CoCo’s leadership development philosophy seems contrarian these days: You rise not via self-promotion and sloganeering, but by empowering your neighbors, and learning how to follow their lead. Bass and her unflashy, collaborative style embody this approach, but she is just one of hundreds of CoCo alumni in Southern California governments, non-profits, civic institutions, and business organizations. Among these leaders are Marqueece Harris-Dawson, now a powerful L.A. city councilmember, and Alberto Retana, a CoCo organizer who, after a stint in the Obama administration, returned to serve as CoCo’s president and CEO.

South L.A., with 850,000 people covering 50 square miles, is the size of San Francisco; it’s also the last great working-class place in coastal California. And at the heart of the complicated story of its improvement over the past 30 years is Community Coalition.

“Regardless of who’s in office and regardless of the conditions that oppress us,” Retana said in an online commemoration of CoCo’s 30th birthday this year, “we too must step up for South L.A. and keep fighting!”

Bass was a physician’s assistant and clinical instructor at USC’s medical school when she gathered neighborhood activists in a living room 30 years ago. These South L.A. residents were desperate to address crack cocaine’s toll on their community, from addiction to police abuse. So they started CoCo—originally Community Coalition for Substance Abuse Prevention and Treatment—in the belief that the people of South L.A. needed to be involved in creating solutions for such problems.

That premise still defines Community Coalition’s mission to “elevate the voices of our members, shift power to the community, and tackle the root causes of poverty, crime and violence.” And it informs CoCo’s three main methods—organizing, advocacy, and providing community services.

Flexibility and practicality distinguish CoCo among local institutions old and new. In its early efforts with the crack epidemic, CoCo tried multiple tactics before identifying liquor stores as the nexus of crime and drugs. After the 1992 Civil Unrest, which caused historic damage in South L.A., CoCo worked to prevent more than 150 liquor stores that had been destroyed from being rebuilt; many were replaced with housing, grocery stores, or laundromats.

From there, CoCo branched out—to almost everything. CoCo developed a successful youth organizing program, led efforts to help children stay with families instead of being forced into foster care, and originated the model for youth services that is now called “Summer Night Lights.” And CoCo was integral in successful battles to build more schools and provide more college prep classes in South L.A. and across California.

After Bass departed CoCo leadership in 2004 to enter politics, the group formed even more coalitions and further increased its reach. CoCo has sought to remake the justice system, protect immigrants, address structural racism, and enhance neighborhood power over land use and economic development.

Such work led CoCo into ballot measure politics, both locally and statewide. The organization was a major supporter of Proposition 30, a statewide tax hike in 2012. It organized to pass the criminal justice reform measures Propositions 47 and 57—and for the even more difficult work of implementing them. More recently, CoCo has gone national as a training resource for community work, with a new center to bring people from all over America to L.A. for fellowships in organizing.

In all of this, CoCo has been operating in a South L.A. that is undergoing rapid demographic change, with Black people leaving and Latinos arriving. The organization has taken great care to balance Black and Latino representation among its leaders, organizers, and even attendees at community meetings. USC sociologist Manuel Pastor has credited CoCo as one of the local multi-racial organizations making South L.A. a model of “ethnic sedimentation,” where racial and ethnic groups collaborate and build productively on each other’s histories, rather than of “ethnic succession,” where conflict arises as a new group replaces an old one.

The notion of South L.A. as a national model may surprise Americans who still associate the area with gangs and riots. But no place could be more relevant to a country that finds itself near rock bottom. Over the past 30 years, crime in South L.A. declined by more than two-thirds, health care access expanded, education improved, and transportation, arts, and food options exploded. Is there any doubt that the United States could benefit right now from emulating Community Coalition’s devotion to cultivating new leaders and building unity from the ground up?

If Joe Biden picks Bass as his running mate, CoCo organizers, past and present, could well be leaders in a new administration. Given their track record, the prospect of a South L.A. vice presidency might offer Americans something that is hard to find these days: