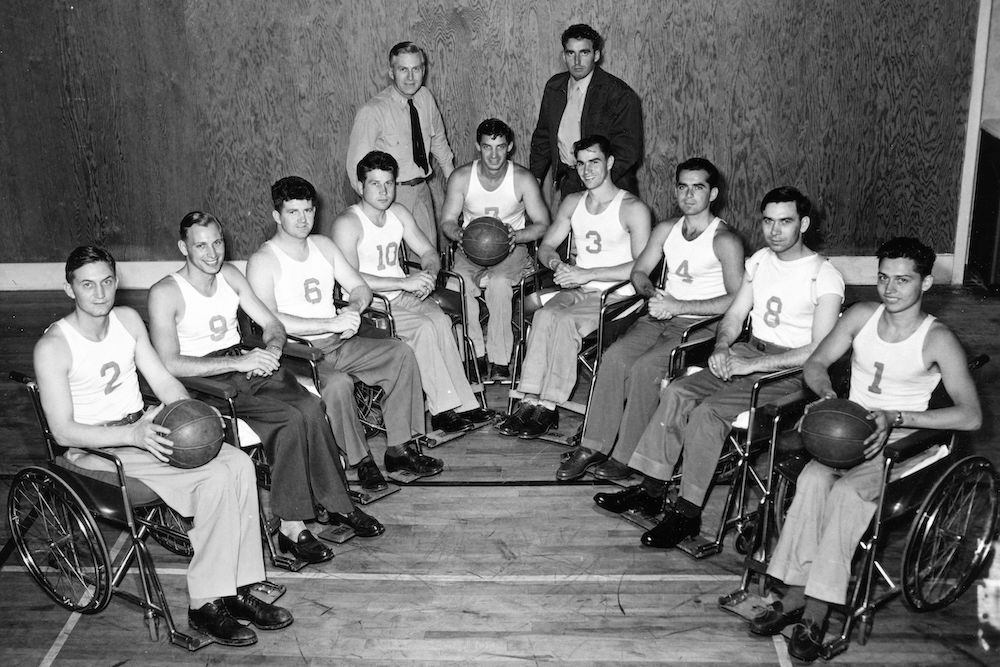 The Rolling Devils pose for a team photo, c. 1947. Courtesy of Deborah Harms and the John Winterholler family.

Behind the sharp-shooting wizardry of Jack Gerhardt, a wiry paratrooper who was wounded at Normandy, Halloran took a 12-9 edge at halftime before cruising to a 20-11 victory. But the final score didn’t seem to matter much to the boisterous crowd; they cheered both teams with equal fervor because they knew they were watching something special.

To that point in time, wheelchair sports did not exist. The Paralympics had not yet been invented. These veterans were sports trailblazers.

They were medical miracles as well.

Before World War II, paraplegia was considered to be a virtual death sentence. The life expectancy of soldiers who suffered traumatic spinal-cord injuries during World War I was estimated at 18 months. Most died from sepsis or infection. The “dead-enders” and “no-hopers” who survived were shunted off to institutions or hidden from view by their families. They were stigmatized for their disability and considered unlikely prospects for employment or marriage: How could they start or support a family, the logic went, when they couldn’t control their own bladders?

This stigma extended all the way to the office of the president of the United States. Franklin D. Roosevelt used a wheelchair after he was stricken with polio in the early 1920s. He did not hide his affliction after he was first elected president in 1932, but he rarely appeared in public in a wheelchair and took extreme measures to avoid being photographed that way.

World War II would prove to be a game-changer for the public’s perception of paraplegia. The war unleashed, along with new weapons, innovative medical practices, and drugs that saved soldiers’ lives. The discovery of penicillin in 1928, and the ability to produce large quantities of the “wonder drug” in the early 1940s, dramatically reduced fatal infections, especially among those with spinal cord injuries. So did the use of sulfa powder and tablets. The collection and distribution of plasma allowed for life-saving blood transfusions, while advances in anesthesia enabled surgeons to save lives on the operating table. Field hospitals and portable surgical units situated close to the battlefield enabled doctors to treat the wounded expeditiously.

Thanks to faster evacuation and transportation methods, including transport planes and hospital ships, injured service-members could return home sooner and in better health.
Once stateside, an estimated 2,500 U.S. paralyzed veterans regained their health and equilibrium in one of the seven newly opened spinal-cord injury centers within the Veterans Administration hospital system.

Veterans and their doctors experimented with several sports, including seated volleyball and wheelchair baseball, but none caught on until a physical education instructor at Birmingham VA hospital in Van Nuys, California, created a new sport: wheelchair basketball.

Ernest Bors in California and Howard Rusk in New York were among the doctors who helped popularize treatments in which paralyzed veterans used recreation to repair their damaged bodies and to adjust to their “new normal” condition. Veterans and their doctors experimented with several sports, including seated volleyball and wheelchair baseball, but none caught on until a physical education instructor at Birmingham VA hospital in Van Nuys, California, created a new sport: wheelchair basketball.

That P.E. teacher, Bob Rynearson, was a coach’s son who grew up playing sports in the San Fernando Valley. At the Birmingham VA, he noticed that the paralyzed veterans liked to play a crude form of pickup basketball after the non-disabled players abandoned the court. He began organizing practices for the wheelchair crew and then wrote the first set of rules for the sport.

Rynearson’s goal was twofold: maintaining the speed of the game without jeopardizing the players’ safety. Players were allowed two pushes on their wheels while in possession of the ball, after which they were required to pass, dribble, or shoot. Incidental contact between wheelchairs was allowed, although ramming into an opponent on purpose resulted in a personal foul.

While watching the men wheel up and down the court and jockey for position, Rynearson arrived at his most perceptive insight: that the wheelchair should be considered an extension of the athlete’s body. In this he was aided by the new-fangled wheelchair models being produced in Southern California, which the rising aviation industry had turned into an engineering capital.

Wheelchair “technology” had long been mired in Civil War-era design. Old-school chairs were all-wooden, rigid-frame models that were essentially pieces of bulky furniture, with all of the maneuverability of an aircraft carrier. That changed in the late 1930s, when engineers Herbert Everest and Harry Jennings started to fashion something more maneuverable.

Everest, an engineer who broke his back in a mining accident, had become discouraged with the cumbersome models, and proposed creating a device that would become the first truly modern wheelchair. Everest & Jennings’ easy-to-propel, transportable wheelchairs were made of lightweight steel aircraft tubing and weighed around 45 pounds. They were designed for the paraplegics’ comfort and ease-of-use. And, as it turned out, the E&J chairs worked well for basketball action. 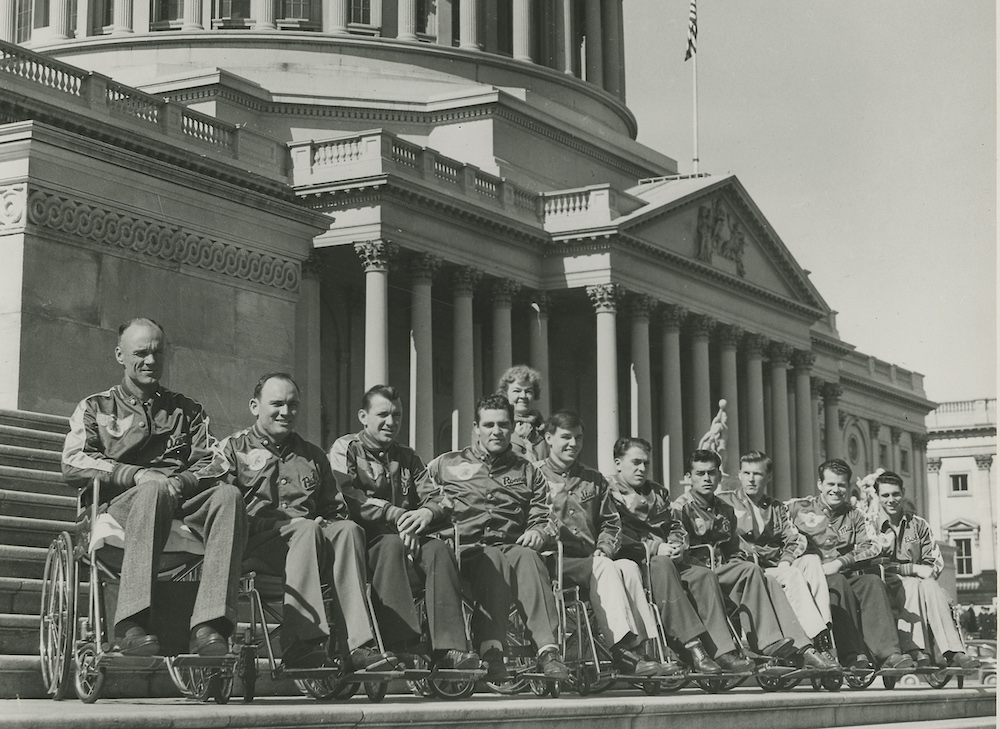 The Flying Wheels lobby for disability rights during their cross-country barnstorming tour in 1948. Courtesy of the Bob Rynearson family.

At about the same time the games were getting underway in California, paralyzed veterans rehabbing at Cushing VA hospital in Framingham, Massachusetts, started to play their own version of the sport inside the hospital’s gymnasium. Soon, wheelchair basketball squads with names like the Rolling Devils, the Flying Wheels, and the Gizz Kids were barnstorming the nation and filling arenas with cheering fans. They routinely trounced non-disabled professional and college teams who borrowed wheelchairs for the occasion, including the New York Knicks, the Boston Celtics, and the Harlem Globetrotters.

For a short while, they became media darlings. A photo of Halloran star Jack Gerhardt, sitting in his wheelchair while holding a basketball, was featured on the cover of Newsweek. Seemingly every publication covered their exploits, from Women’s Home Companion to Popular Mechanics to the Daily Worker. Hollywood came calling to make a feature film about them, The Men, which marked the Hollywood debut of Marlon Brando.

America’s wounded warriors-turned-playmakers were joined by their British counterparts at Stoke Mandeville Hospital outside London. There, the vets started with archery and then netball (a cousin of basketball that is played without a backboard and with a lowered rim). The brainchild of these games was Dr. Ludwig Guttmann, a German-born Jewish neurologist who fled the Nazis for England just before the war. There, Guttmann took charge of the spinal-cord injury ward at Stoke Mandeville and, like Bors and Rusk, incorporated recreation into the veterans’ rehabilitation regimen.

Guttmann launched the Stoke Mandeville Games and was not modest about his goals: he wanted to turn the event into “the disabled men and women’s equivalent of the Olympic Games.” His ambition came to fruition in Rome in 1960, when he orchestrated what is today considered to be the first official Paralympic Games. Their birth inspired countless other previously unimaginable events and activities for people with disabilities.

The pioneering wheelchair athletes didn’t just revolutionize the possibility of sport, but their public presence also helped reduce the stigma of disability outside the gymnasium. If people with paraplegia could play an exciting and exacting brand of basketball—basketball!—they couldn’t possibly be considered “wheelchair-bound” or “confined to a wheelchair.” Given the chance, they were obviously capable of doing everything non-disabled veterans could do.

“The years to come are not going to be wasted in self-pity or vain regrets,” the New York Times editorialized in 1948, after another early wheelchair basketball contest. “They are going to be participants.”

They proved to be more than “participants.” In 1946, as they were rehabbing in the VA hospitals, they banded together to form the Paralyzed Veterans of America organization. The PVA was an early and vocal leader in the protracted fight for human rights for those with disabilities. Its members raised money for scientists to research paraplegia; lobbied Congress for legislation that addressed accessibility, employment, housing, and transportation; advocated for the principles of independence and self-determination; and refused to be treated as objects of pity.

In demonstrating that ability matters more than disability, these veterans fired the first shots in what would become the protracted fight for disability rights in this country.