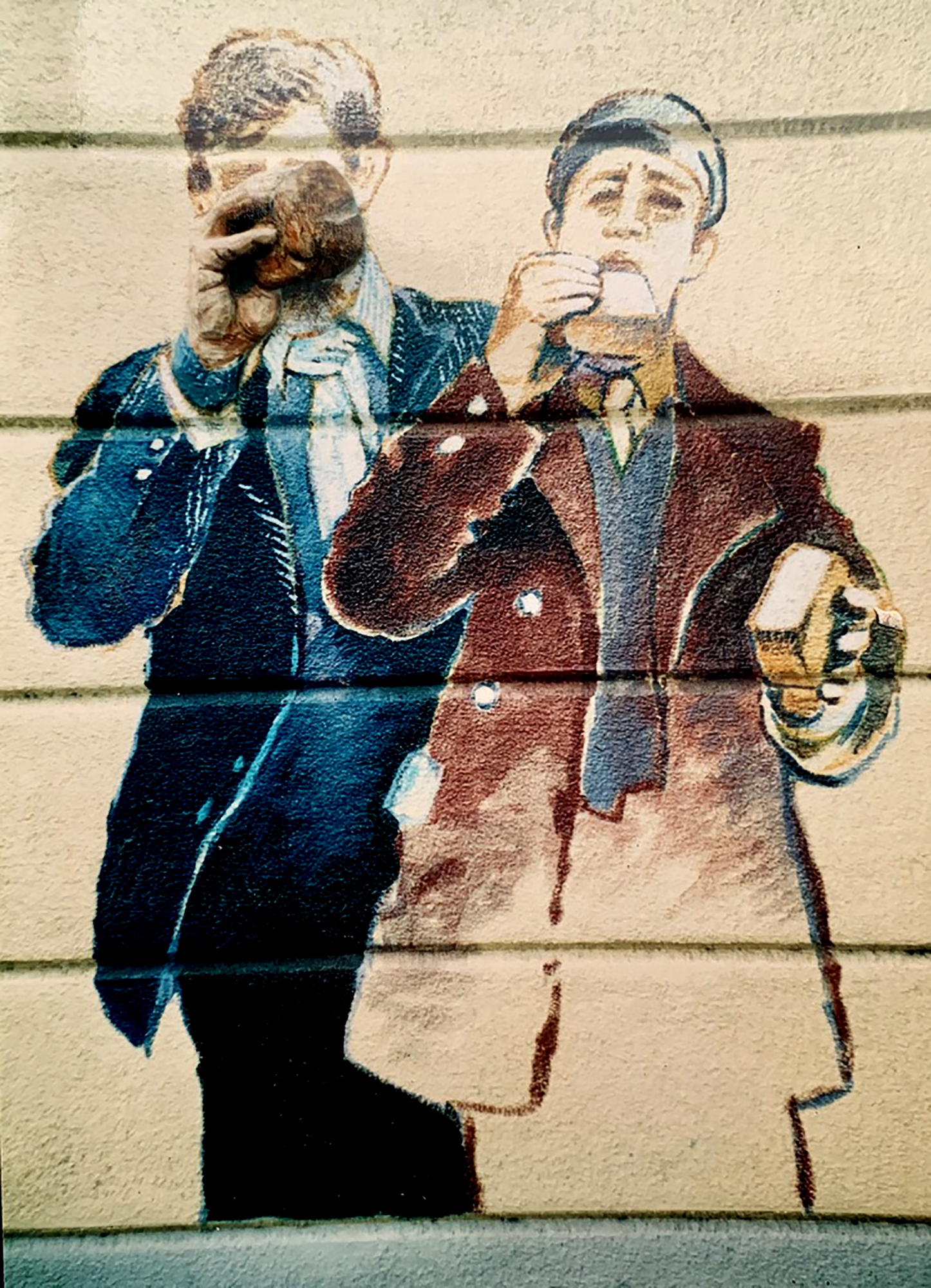 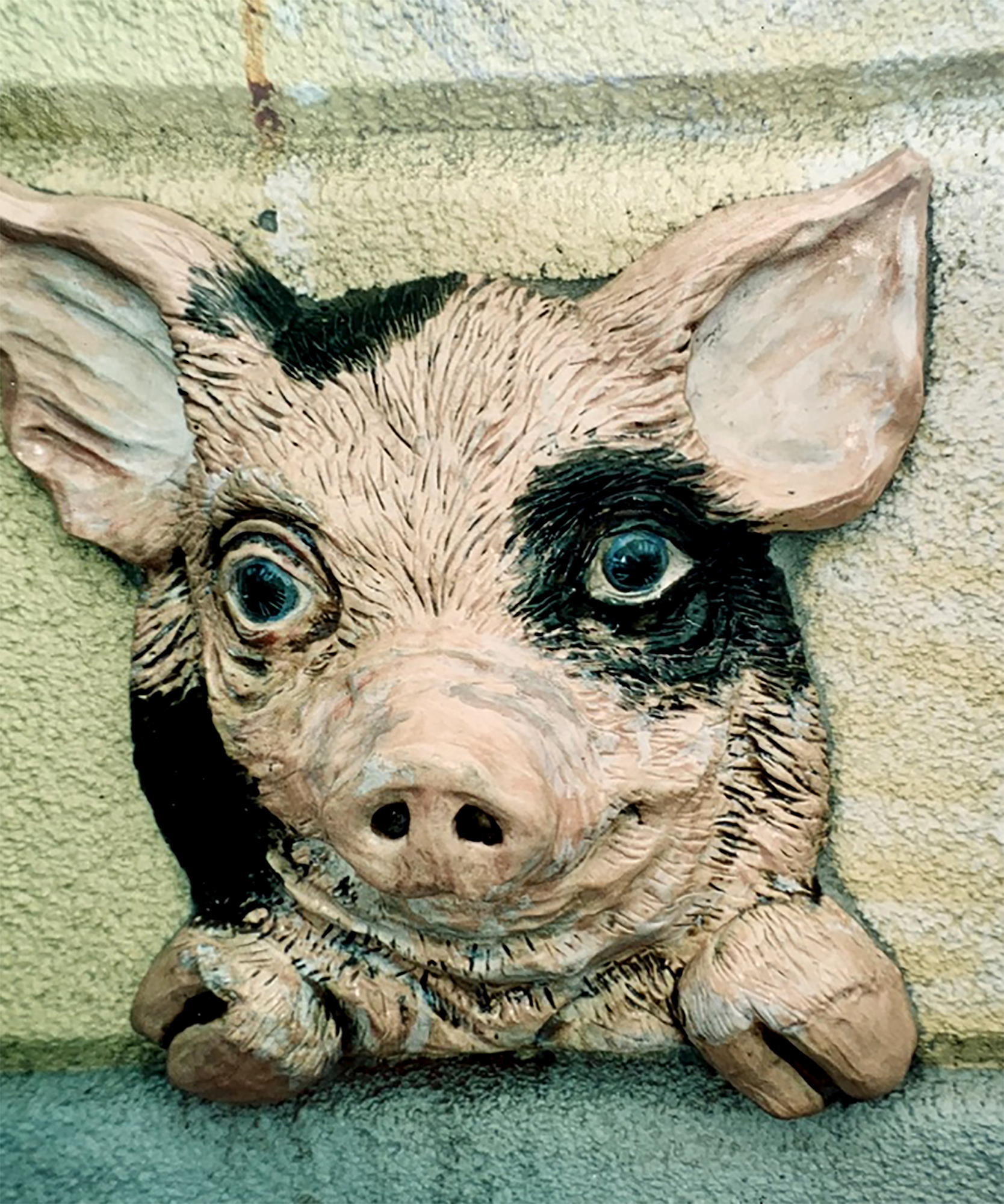 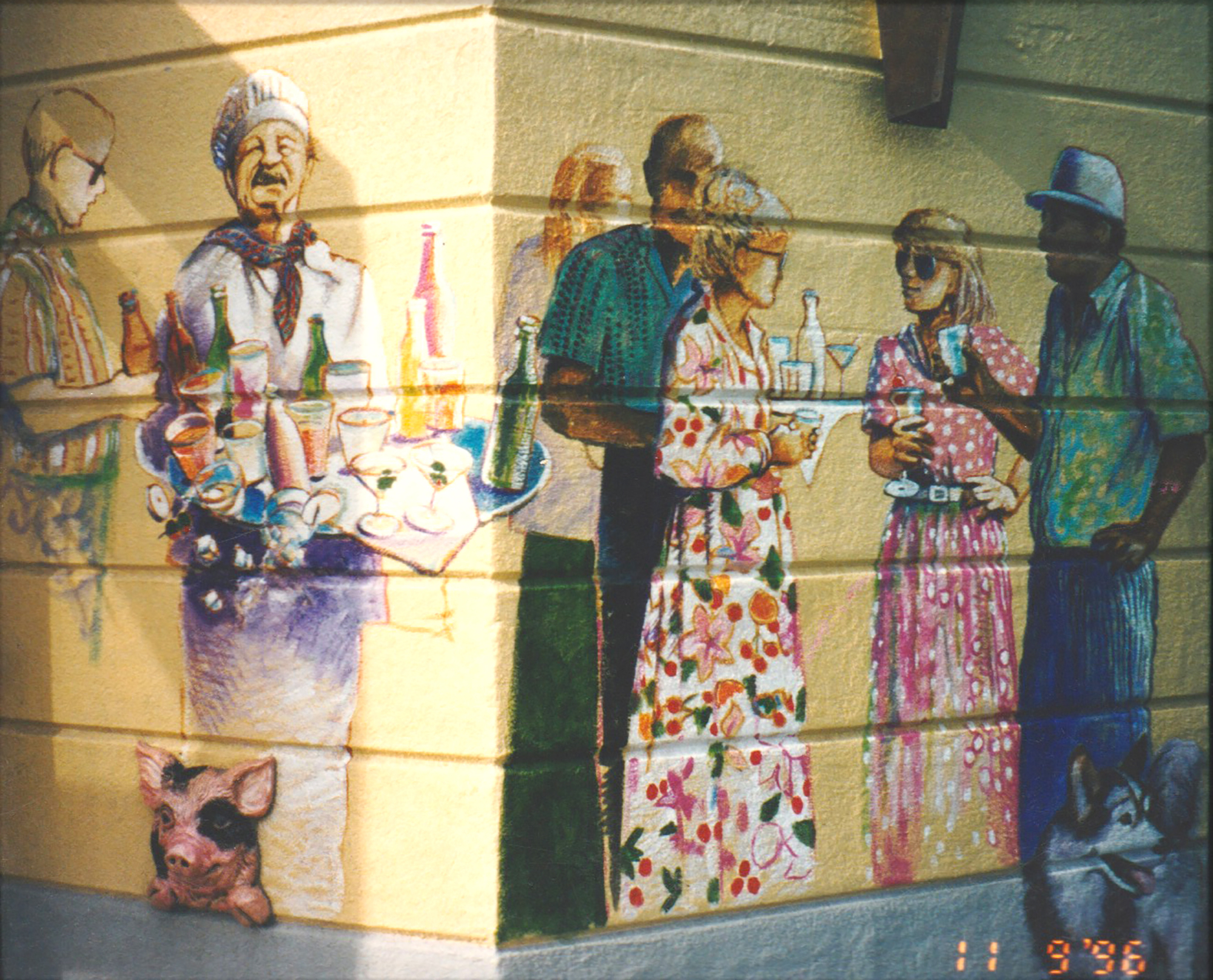 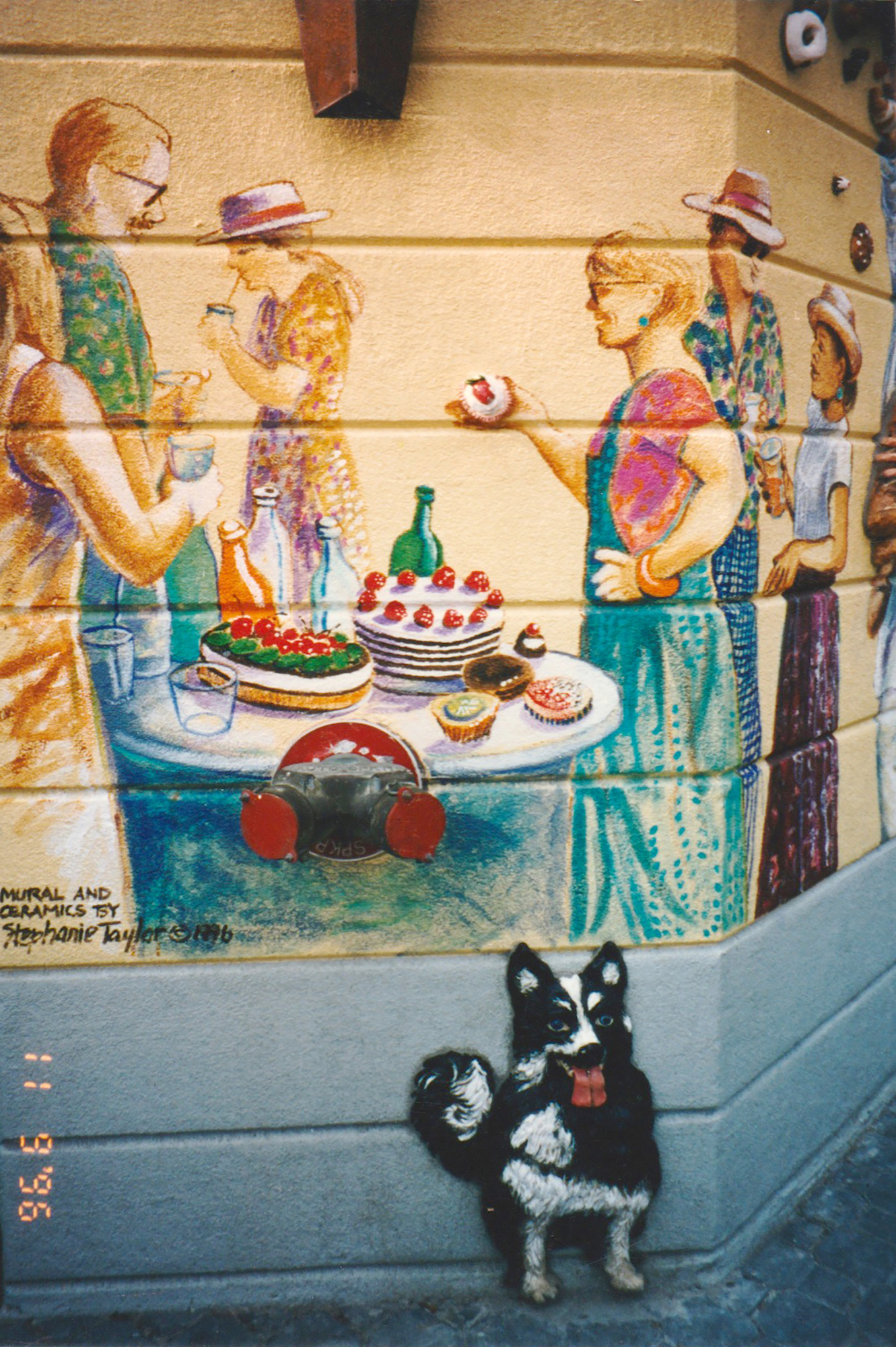 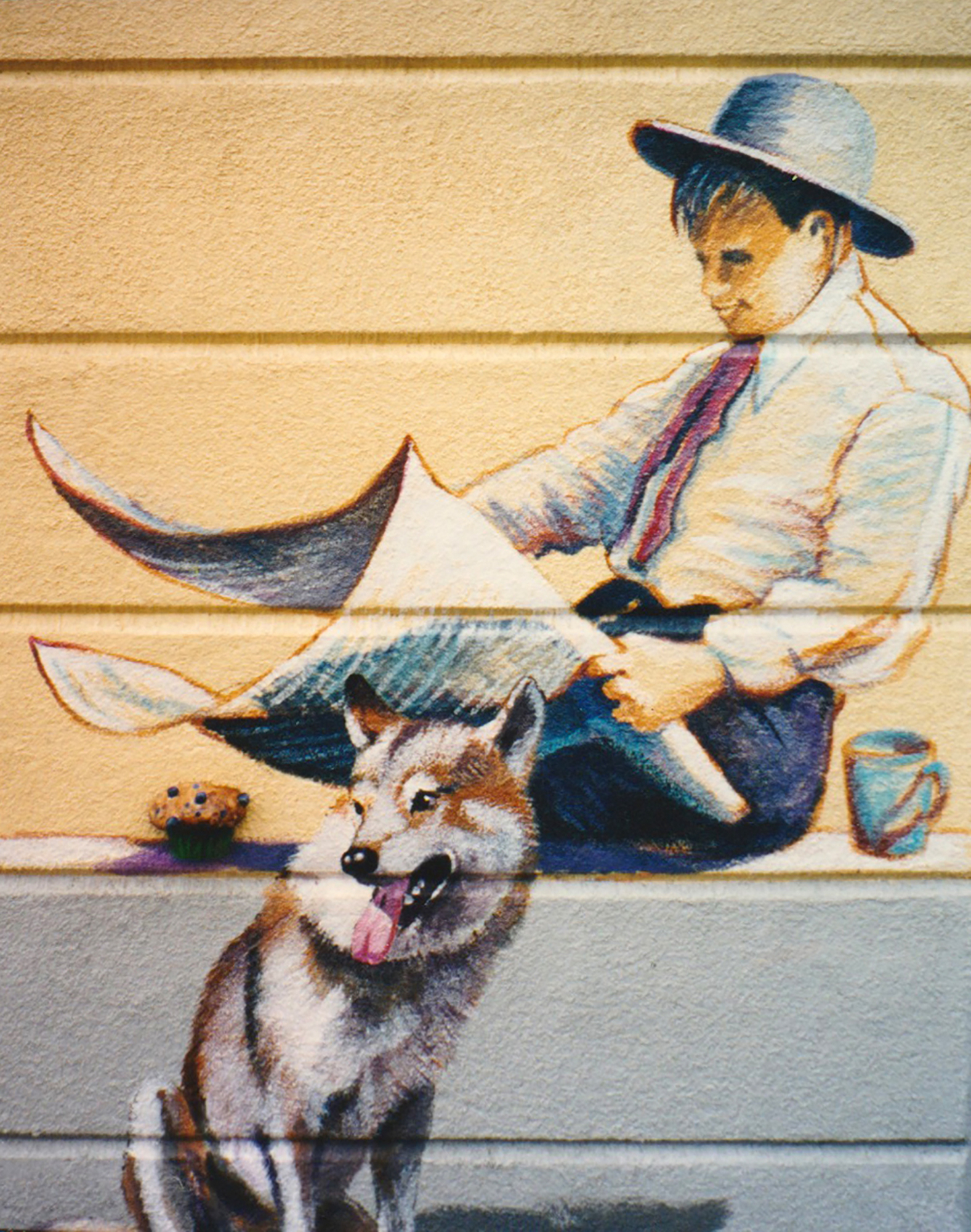 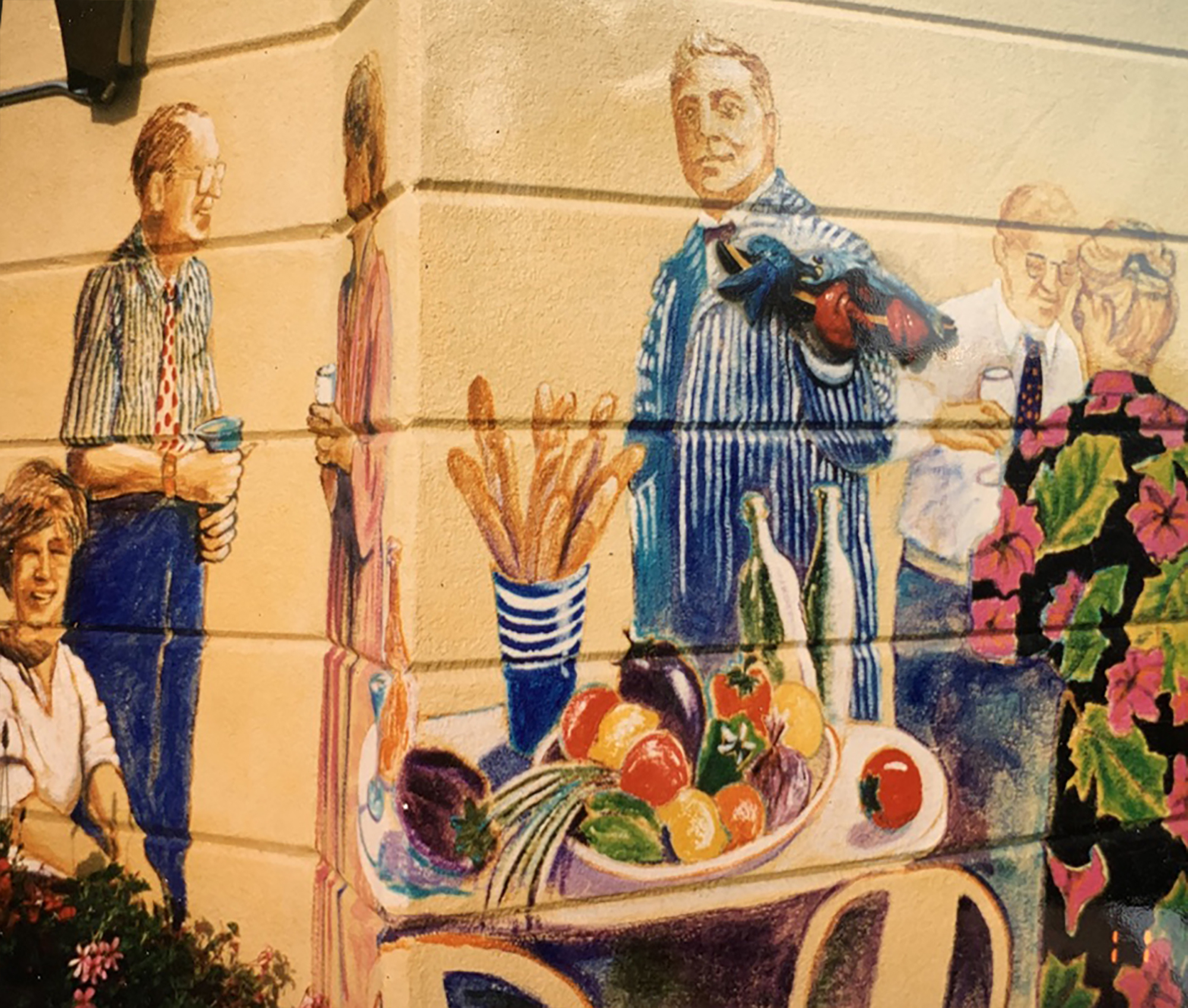 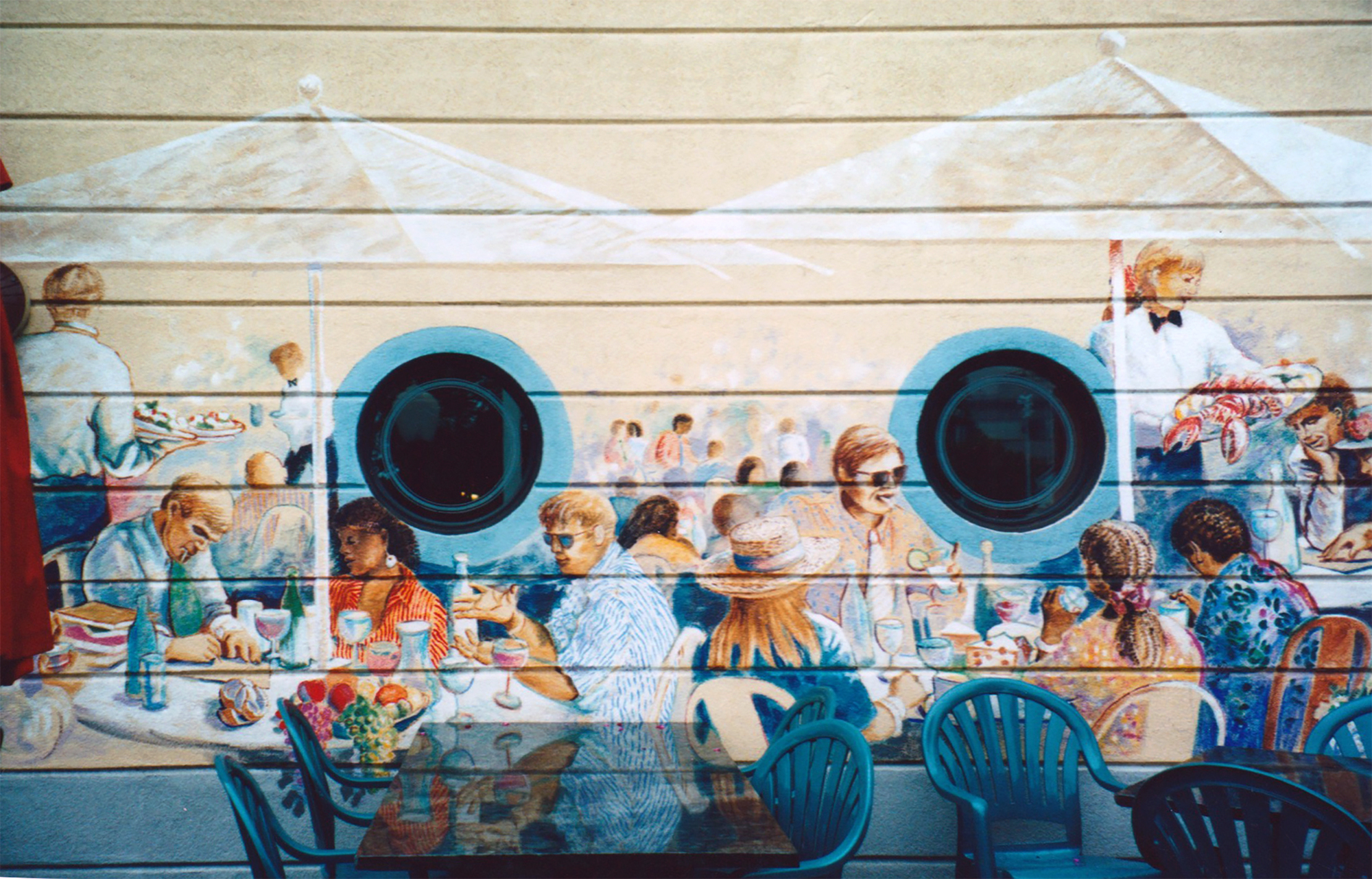 Jack London Mural, Jack London Square, Oakland, 1996, exterior 12x60,’ ceramic and acrylic. There are two Jacks—one on the left, one on the right. Courtesy of Stephanie Taylor. 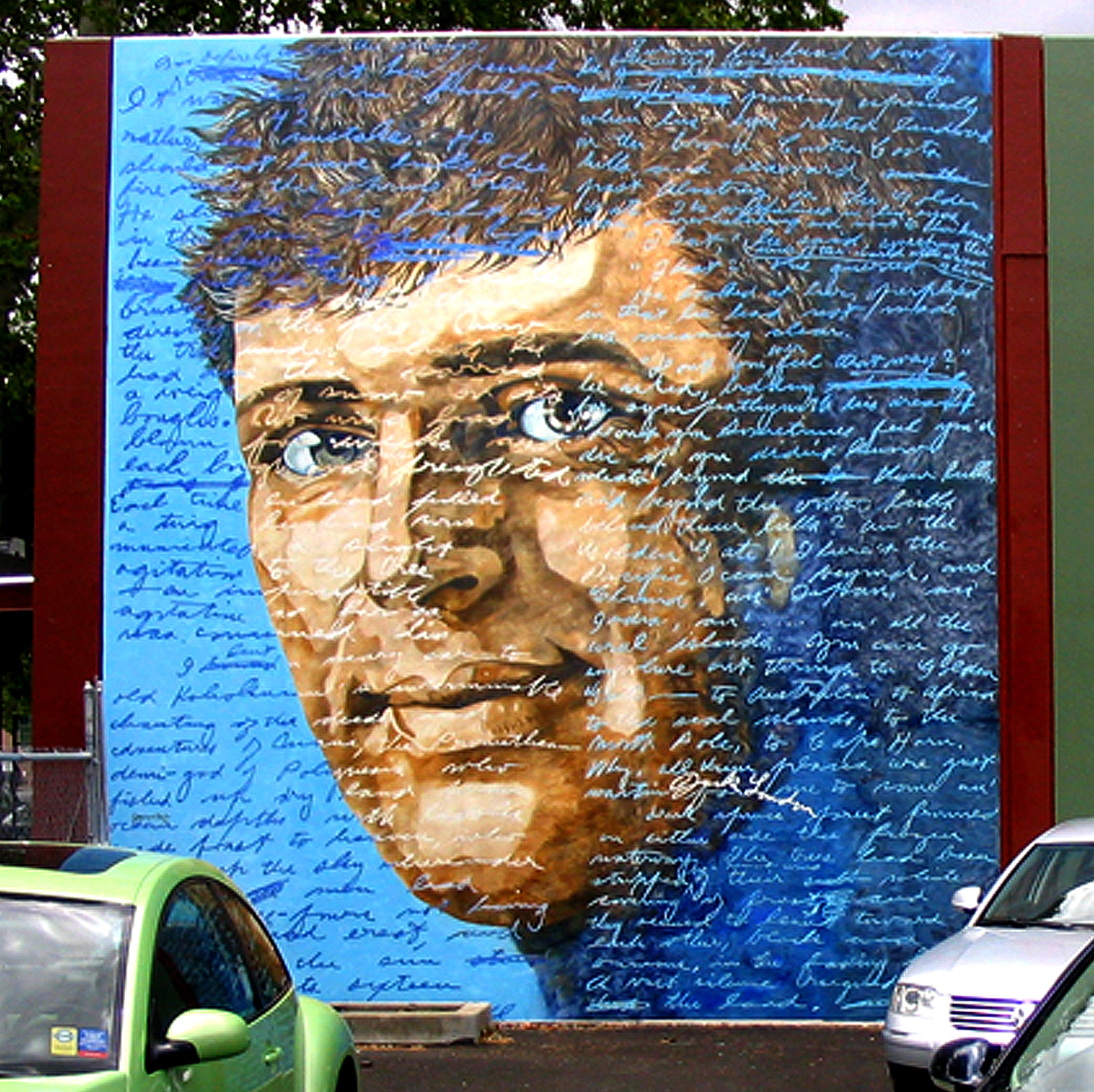 My questions about this were deflected—when I asked my dad if the family had known London socially, he told me, “Oh, no. We wouldn’t have known him; he was a drunk”—and so my curiosity took a back seat for 40 years. Until a hotel manager paid me a visit.

I’m an artist who creates murals, often grounded in history. Nearly 30 years ago, I was creating a mural about Amelia Earhart for Hilton, when a manager from a hotel at Jack London Square came by for a visit, and inspired something London-related in me. I’m one of those artists who lets ideas gestate for years and then finds someone to pay me to do what I want. Five years later, in 1996, that Jack London Square hotel manager called me, saying he had 84 linear feet of blank wall.

I’d never even read London, but I had that curiosity grounded in family lore. I started researching London, who like me, was a California kid, and was quickly hooked. I have a history degree and have always been attracted to locations that connect with a subject. In my work, I try to ask, what was the meaning of a subject, and a location, in the past and now. To that end, I often combine the dead with the living, or place characters together who were never actually in the same place at the same time.

Trying to figure out how to do that with London, I read more by and about London, and realized that his experiences and his passion for issues in the early 20th century were the same issues still plaguing us a century later. I also investigated the nature of London’s antagonism towards Samuels and found myself reckoning with a relationship that reveals quite a bit about the economics and culture of the Bay Area, and the country, then and now.

London’s own words, in books and in news reports, and the accounts of witnesses provide a good picture of what happened on June 21, 1910, and after.

On that date, Jack London paused at the entrance to his neighborhood bar and argued with himself. He felt defeated and devastated, having just left his wife in the hospital. Their newborn daughter, Joy, was dead. He needed a drink.

The famous author had appeared in his court as a defendant several times. Apparently, the encounters produced hard feelings in London. My aunt, prone to exaggeration, bragged that London had threatened to set off a bomb under my great-grandfather’s house.

He carried copies of Jim Jeffries’ autobiography, which he planned to read and share with his fellow reporter, to prepare for “The Fight of the Century.” In 12 days, Jack Johnson, a Black man, would meet Jeffries, “The Great White Hope,” for a heavyweight championship. London was to cover the event in Reno; he would bet on the superiority of white men and lose a lot of money.

As London stepped inside the bar, the saloon’s manger Muldowney, knowing Jack’s reputation, grabbed his arm and yelled, “Get outa me bar, you ruffian.” Fists flew; police arrived.

Was London drunk? “Nah,” he declared, “I’ve only had two drinks all day.”

“You butted me,” declared Muldowney, while London claimed, “I was just trying to get away.” Both were taken to jail, each proclaiming his own innocence and declaring the other the villain.

In court, Judge Samuels regarded both men. “I didn’t strike a single blow,” London explained, though Muldowney’s face was red, swollen and lacerated, while Muldowney insisted that “London hung one on me fore I came across with my wallop.” London’s swollen right eye, puffy nose, and discolorations contrasted with his elegant light grey suit, soft white shirt, flowing knotted tie, and the Panama hat in his hands.

The judge asked London, “Were you drunk?”

“There is no way a man may judge the state of his thirst until he has taken at least one drink, and then he can determine whether he wants another or not,” London argued, to the laughter of the entire room.

Samuels reasoned, since no witness could say who punched first, and both appeared equally battered, he’d give them the “benefit of the doubt,” and dismissed the charges. London seethed.

Why was he so angry? London had little tolerance for what he considered injustice—as a result of a childhood scarred by injustice, bigotry, poverty, starvation and hard labor. He’d also had a traumatic experience with the justice system.

In 1894, at 18, London had joined a march across America, a protest of the unemployed. Walking along an empty street in Niagara Falls, a cop approached. Unable to name a hotel, London was forced directly to a jail courtroom filled with other hobos. As each was casually sentenced without a trial, Jack resolved to “expose their mis- administration of justice.”

With a sentence of 30 days, the chain-ganged prisoners were delivered to the Erie Penitentiary. Stripped and shaved, London found his prison garb became his “insignia of shame,” and he felt the “rushing tides of fear.” In that imposing cell block, he learned that to survive starvation, beatings and monstrous depravity, he must become one of them.

“When one is on the hot lava of hell, he cannot choose his path,” he would later write.

That observation came in The Road, London’s 1907 recounting of his prison experiences—but only those, he wrote, “that weren’t unspeakable.”

So, three years later, as London regarded the black-robed man sitting behind his elevated bench in an ornate courtroom, he plotted revenge against this judge: against a non-Christian (Samuels was Jewish), against the inequities of capitalism, and against an unjust prison system built upon the exploitation of men.

London discovered that the judge owned the land under the tavern and accused Samuels of the kind of graft he’d witnessed all his life. The judge denied this, saying that while he owned the land, he had no other connection.

Having sworn to expose misadministration of justice back in Niagara Falls in 1894, London took his vendetta to the press.

“Oh, we were wolves,” he recalled, “just like the fellows who do business in Wall Street.”

Here is what Jack London couldn’t have known about Samuels: that his family had left Prussia before his birth in 1859 and had arrived in America when he was 3 years old. That Samuels studied for and passed the bar exam in 1899 while selling shoes in Oakland, and then went to work as a lawyer, then an assistant DA. That he was deeply involved with the Jewish community and philanthropic efforts. That Samuels’ son participated in a debate in high school, judged by London.

Shortly after the June 1910 barroom incident that ignited London’s vendetta, the author dashed off a story called “The Benefit of the Doubt,” published in the Saturday Evening Post. It’s a misfire, apathetic attempt at irony, a slur against “Judge Witberg,” and a self-portrait of the author as more physically vengeful and more humiliating than London was in real life. There is little of the passion for social justice in London’s greater works, including The Star Rover, The Iron Heel, and The Valley of the Moon.

This certainly wasn’t the only blast my great-grandfather faced—it turns out that my aunt’s bomb threat story involved not London but a different case in 1908. And London didn’t hurt his reputation. When the judge died in 1925, the courts shut down, and flags flew at half-mast.

None of this soured me on London. I went on to create murals at Jack London Square, called “Jack & Friends,” a literary history of the Bay Area. The sad end of the story came around 2009 when a developer decided to install tile over my murals.