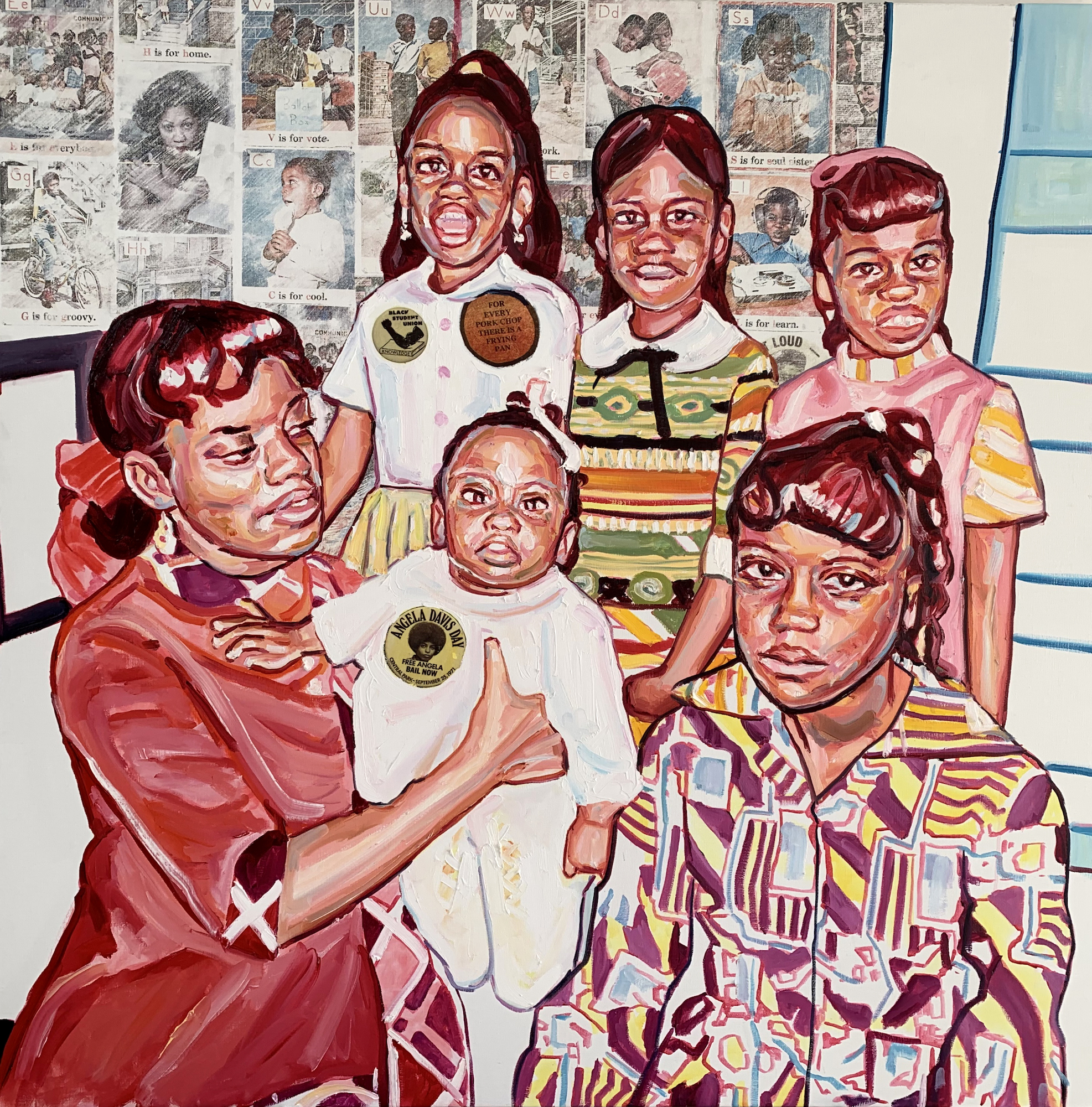 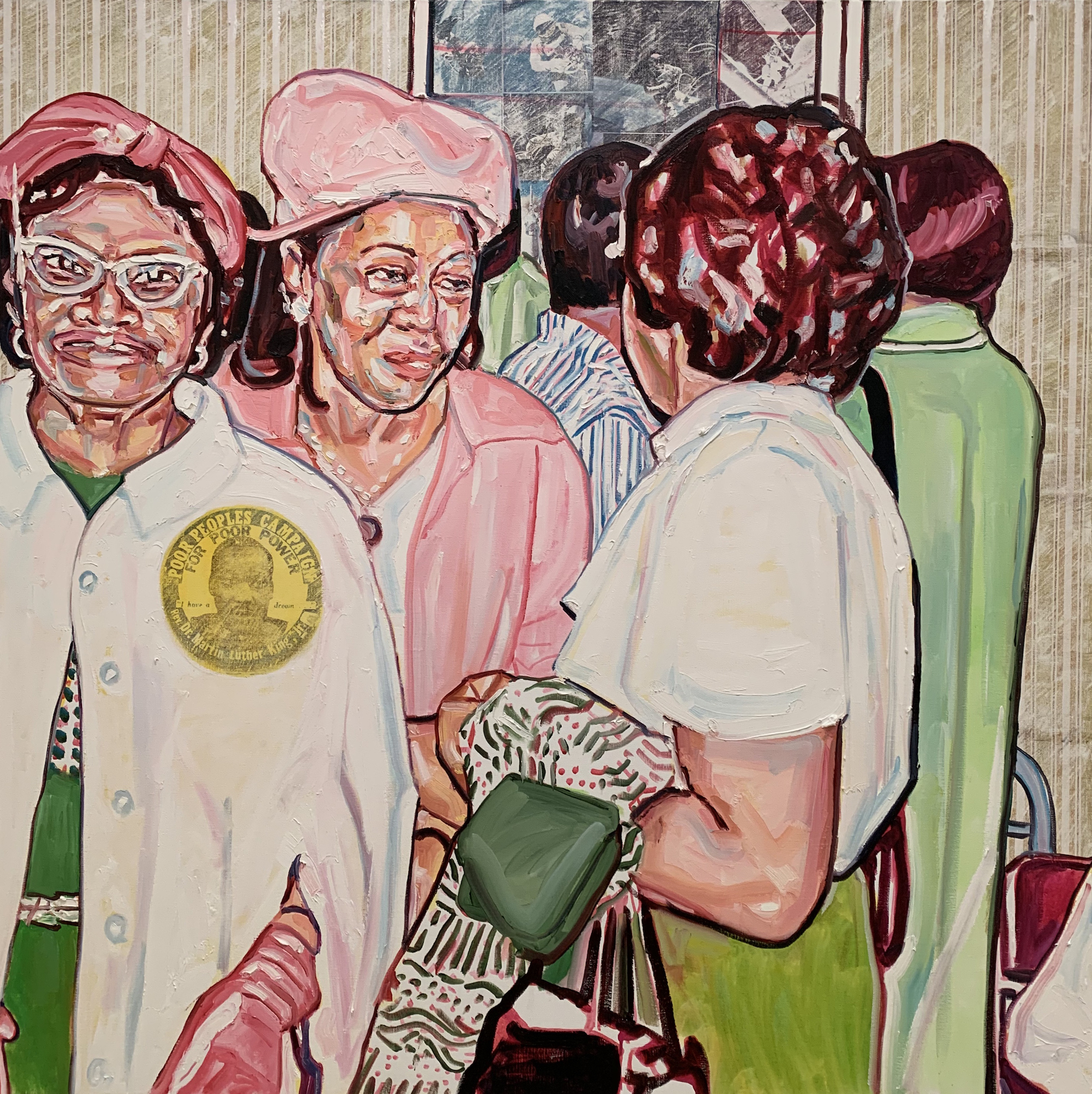 You can fool some people sometimes, but you cant fool all the people all the time (2019) Courtesy of Esiri Erheriene-Essi 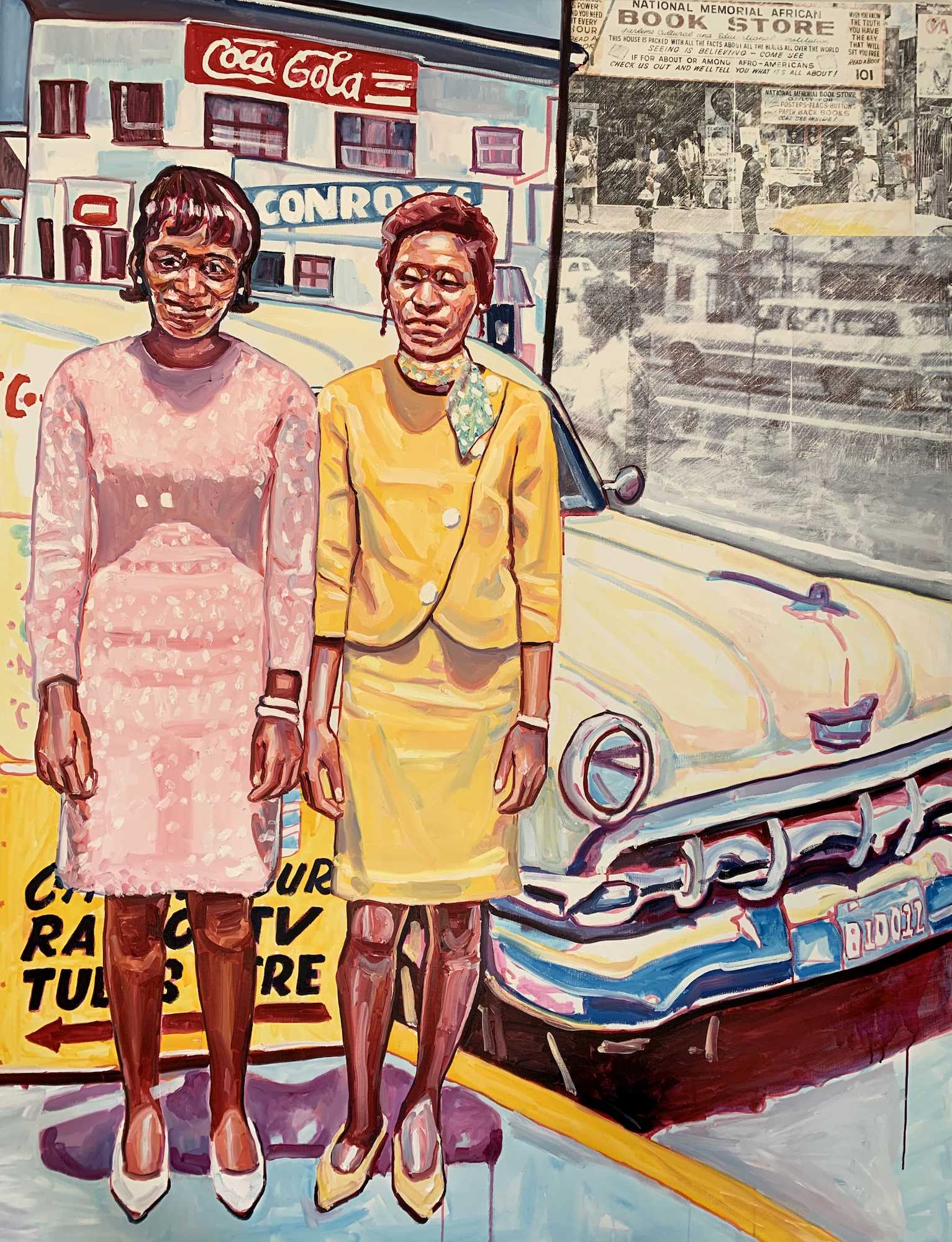 What They Did Yesterday Afternoon (2019) Courtesy of Esiri Erheriene-Essi 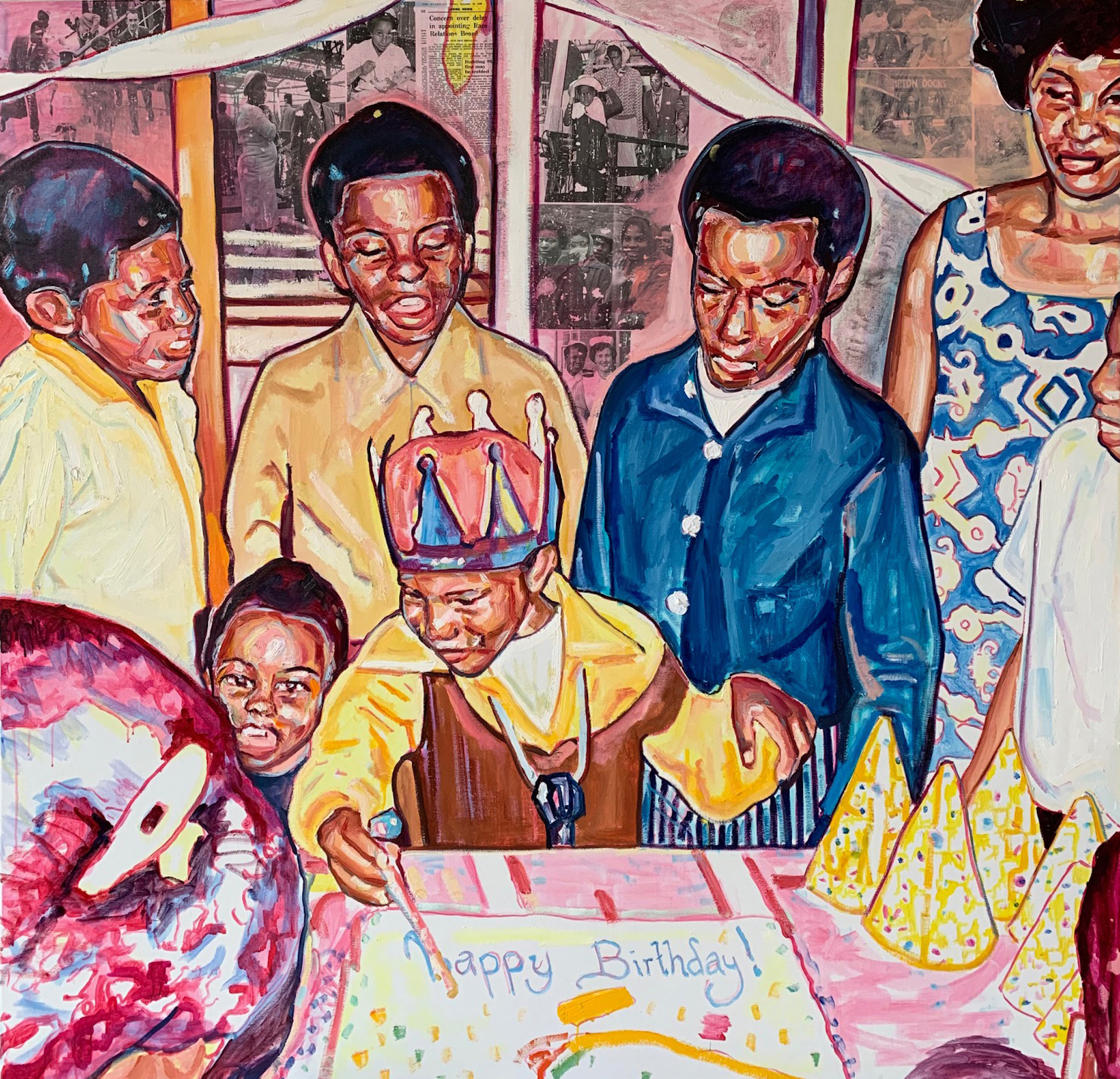 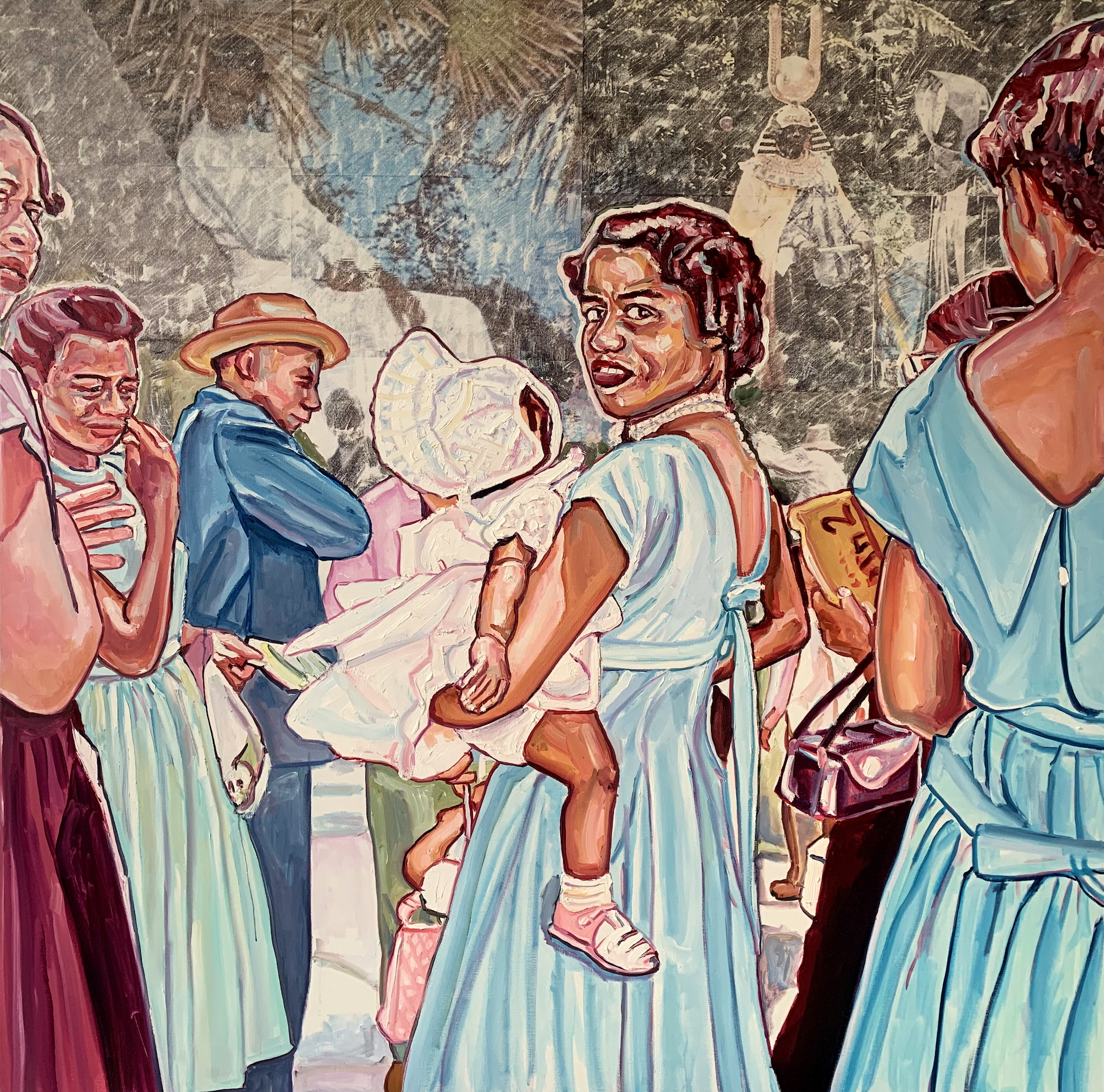 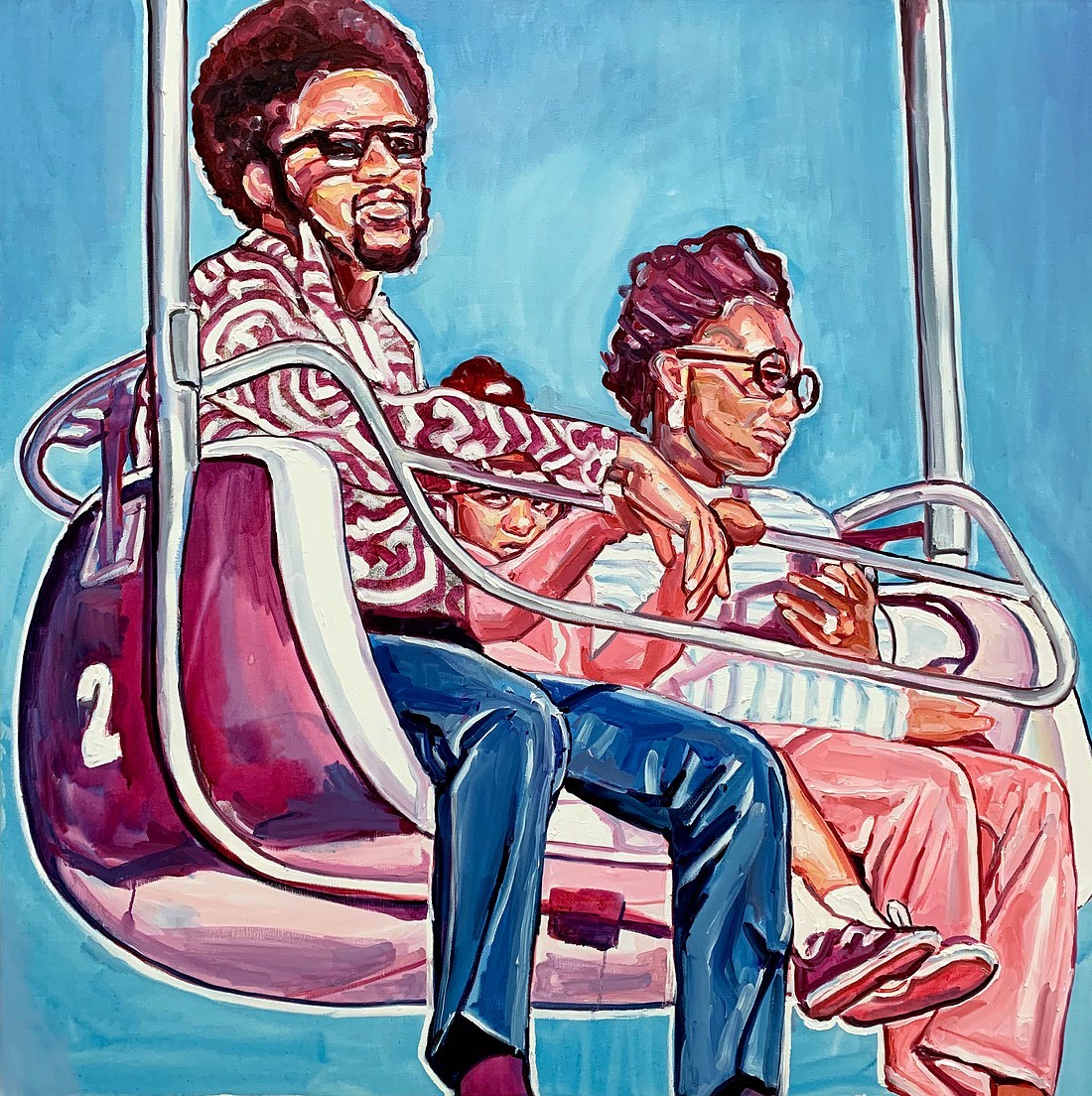 The Voyagers Courtesy of Esiri Erheriene-Essi

The earliest colored photographs were fragile black-and-white daguerreotypes, hand-painted with a watercolor technique. The task was laborious, not to mention risky, because the plates were so easily damaged. But the result, a cross between painting and photograph, gave the 19th-century pictures a new level of verisimilitude.

Today, London-born and Amsterdam-based painter Esiri Erheriene-Essi pursues a different sort of visual fidelity when she transforms archival mid-century snapshots of the African diaspora through oil paint and often xerox transfer, a graphic technique she uses to layer images onto the background of her pieces.

Erheriene-Essi’s vibrant scenes pull insight out of everyday life—whether it’s an afternoon outing or a birthday crowd gathered round a table featuring a cake piled high with candles. Reconstructing these “quiet histories” in lush technicolor and unmistakable patterns, she opens up her source material and challenges the way the past is remembered.

History, Erheriene-Essi writes on her website, is the means through which “we build our identities and our knowledge, frame our references, question our aspirations and form our points of view.” But representations of everyday Black life are so often removed from its telling.

As “part of an initiative, long overdue” to document Black experience, the Metropolitan Museum of Art recently showcased 150 studio portraits of African Americans taken in the 1940s and ’50s. That 2018 exhibition revealed not only what was able to be uncovered in auctions and flea markets, but also what had been lost to time and neglect. Visitors entering the show were solicited to help in a crowd-sourcing effort to identify the many unidentified sitters and photographers, who, if they are still alive, are in their 80s and 90s now.

Reconstructing these “quiet histories” in lush technicolor and unmistakable patterns, she opens up her source material and challenges the way the past is remembered.

There’s more to what Erheriene-Essi does, though, than show the moment as it was photographed. Stripped of their original context, displaying anonymous photographs such as those at the Met addresses the need for representation, but often reflects personal moments in a historical vacuum. As an interpreter of the source images she collects, Erheriene-Essi is free to bring out personalities and suggest larger historical arcs in the paintings, such as those she developed for last year’s Prix De Rome (Netherlands), the country’s most prestigious art award, for which she was a nominee.

Lavished with dimension and detail, the resulting series, The Inheritance (or Familiar Strangers), includes recognizable markers of the larger political and cultural forces of the day that would have seeped into the lives of her subjects—a “Free Angela Davis” pin in one scene, a nod to MLK’s Poor People’s Campaign in another.

As Erheriene-Essi explains on her website, interpreting these anonymous photographs (which date from the 1950s to 1980s) as art gives her the opportunity to “re-imagine more humane and liberating narratives than what has gone before, and perhaps slightly change our reading of history in the process.”

By building bridges between the photographs she collects, the era they were taken in, and how she sees them today, Erheriene-Essi seeks to get closer to historical reality. But to do this also requires taking corrective measures to the medium of photography itself.

Erheriene-Essi, whose parents are from Nigeria, has spoken at length about how the photo technology of the period she uses as source material was intentionally set up to flatten and remove nuance from Black skin. That’s because Kodak’s “Shirley” cards—named after the Kodak employee used as the standard model—made it so that photo labs calibrated skin tones, shadows, and light during the printing process to Shirley’s ivory-white skin color. For decades, color film was intentionally designed for light-skinned people. (Concordia University professor Lorna Roth showed it took until the 1960s and ’70s for Kodak to begin to fix its color photography bias when it came to skin with more melanin.)

A century after hand-colored daguerreotypes were needed, Erheriene-Essi’s work makes a compelling case for why the mid-20th century, with all its technological gains, still requires the corrective hand of an artist to make these vernacular images of Black life—her “familiar strangers,” as she calls them—more recognizable.