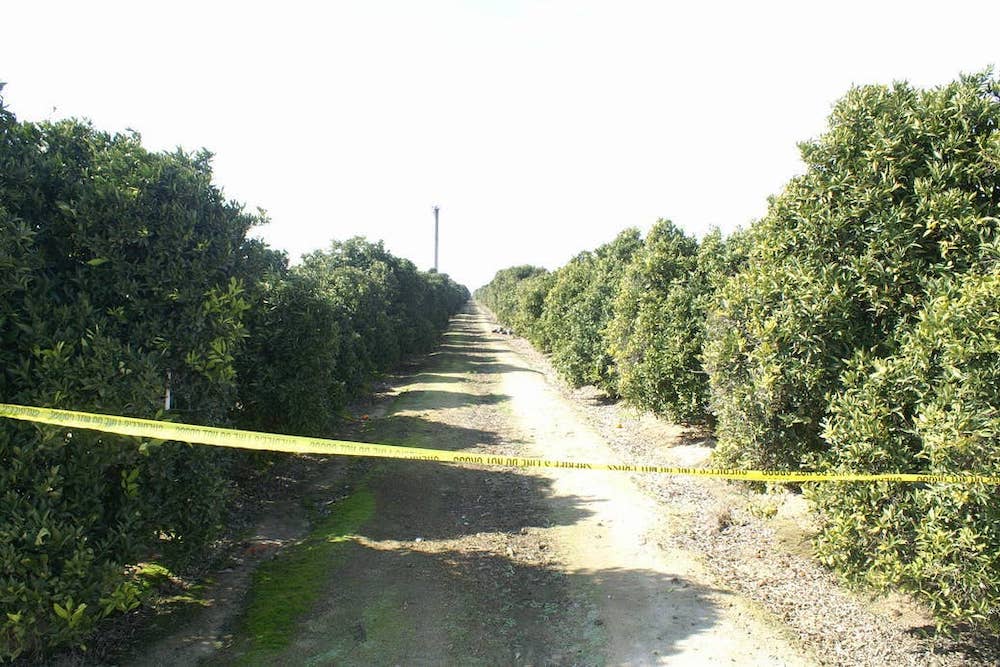 A 2011 crime scene in Tulare County, where one of Jose Martinez's victims was found. Courtesy of Marion County Sherff’s Office via FOIA/Buzzfeed.

We are all unincorporated now.

Unincorporated communities—places that aren’t part of an incorporated city or town, and thus don’t have their own municipal government—live at the whims and mercies of their counties, which may or may not provide necessary services. The pandemic is giving all Californians a taste of unincorporated life, thanks to state officials deciding to let the virus-fighting performance and preferences of our counties and county governments determine whether we can shop, play in a park, or send our kids to school.

As we’re learning, life under the thumb of your county is full of uncertainties about the future, frustrations about our powerlessness, and feelings of abandonment. The good news for most Californians is that COVID-19 will recede someday, and we’ll reclaim the power of self-determination from our counties.

The bad news is that California’s thousands of unincorporated communities will have to keep on living like this.

Unincorporated places vary in context—they can be islands of development surrounded by cities, suburbs, or exurbs (like Marin City or San Lorenzo, in the Bay Area), or small towns in remote areas (like Three Rivers, outside Sequoia National Park, or Mecca, near the Salton Sea)—but typically they are full of people desperate for any affordable place to live in an expensive state. Without municipal government and taxes, such places can lack sidewalks and reliable water and sewage services. County sheriffs handle emergencies; there often are no local police to call, much less defund.

I’ve been thinking about California’s unincorporated places while reading BuzzFeed investigative editor Jessica Garrison’s new book, The Devil’s Harvest, about one of our state’s most prolific and least known contract killers, Jose Martinez. Garrison’s spellbinding account explains that Martinez got away with killing at least 36 people over three decades for two big reasons. One was that he murdered people the authorities didn’t care about—poor, non-white migrants who might be criminals themselves. “Some lives count more than others, and nothing reveals this as starkly as death,” she writes.

The other reason was where he committed his crimes.

Martinez made a habit of killing people in out-of-the-way unincorporated jurisdictions with little law enforcement. It also helped that Martinez himself lived in and around such communities, notably Earlimart, an unincorporated settlement of 8,700 along State Highway 99 at the bottom of Tulare County, in the San Joaquin Valley.

In telling the story of a killer, Garrison gives us a powerful account of how such communities refuse to die. She points to a footnote from the 1971 update of Tulare County’s General Plan, which declared Earlimart and other unincorporated places “nonviable communities” with “little or no authentic future.” To encourage people to leave, the county withheld services, meaning there was no big playground, no civic center, and no police station in this island of people surrounded by vineyards and almond groves.

Yet, despite the county policy of discrimination and neglect, Earlimart survived and grew as a home for farmworkers who toiled nearby. “Down on the valley floor,” Garrison writes, “any notion of California as a progressive egalitarian land of opportunity disintegrates under the relentless, baking sun.”

The Earlimart narrative of attempted, and failed, murder of community is common for California’s unincorporated places, and not just in the San Joaquin Valley, where counties from Madera to San Joaquin have had their own explicit policies of starving similar towns. The inland deserts of Southern California, from the Victor Valley to the eastern Coachella Valley, have more than their share of such communities. And then there are the low-income urban islands, like the one in west Modesto where my cousins long lived in a house next door to a smelly sewage treatment plant that served the city, but not their own unincorporated neighborhood.

As we’re learning, life under the thumb of your county is full of uncertainties about the future, frustrations about our powerlessness, and feelings of abandonment. The good news for most Californians is that COVID-19 will recede someday, and we’ll reclaim the power of self-determination from our counties.

Many of these urban islands are small, poor, and non-white suburban developments that cities declined to annex as they added better neighborhoods further out. This “leap-frogging” pattern of development—skipping the poor places while seizing the wealthier ones—is an unacknowledged cousin of racist zoning laws. In more rural parts of California, our poorest unincorporated places often started out as supposedly temporary camps for migrant workers from the South, the Dust Bowl, or Latin America.

(This being California, there is, of course, another context for communities without governments: some of California’s wealthiest places, from Rancho Santa Fe to Pebble Beach, are unincorporated, with millionaire residents who choose to fend for themselves.)

Over the past generation, federal and state government have tried to do better by such places. In 1990, federal housing law designated certain parts of California “colonias,” making funding available to such communities for housing, environmental, and agricultural projects. And in the past decade, state legislation in California designated such places “DUCs”—Disadvantaged Unincorporated Communities—and required local governments to identify, map, and include them in planning and some service delivery.

Recent years also have seen lawsuits and organizing to demand better services in some unincorporated settlements. And in her book, Garrison recounts another hopeful phenomenon: young adults who grew up in Earlimart returning home to teach in the schools and build the community.

Still, it’s not clear if the state government is willing to invest enough to bring such communities up to parity. What is clear, from decades of evidence, is that counties—with limited resources and too little power—can’t be trusted to do right by unincorporated places. That history, in combination with our shared experience of county failures during the pandemic, argues strongly for reorganizing California to eliminate or combine counties, and to create more effective forms of regional government.

With all eyes on public health amid this pandemic, it would be a fitting time to do more for unincorporated communities. Poor sanitation and weak infrastructure, especially around water and sewage systems, have left residents with higher rates of respiratory, gastrointestinal, and other chronic diseases.

Californians could start by paying more attention to such places and the people who live in them. In her book’s concluding chapters about the contract killer Jose Martinez, Garrison notes that there was little coverage of his case in the diminished local media, and that authorities didn’t seem interested in accounting fully for all crime victims.

“Each time I published anything about his story, heartbreaking queries landed in my inbox,” Garrison writes. “The specifics vary, but the gist was always the same: Someone they love has been murdered or gone missing in the San Joaquin Valley. The authorities didn’t seem to care. Could I help them find out what happened to their loved one, find some semblance of justice or peace?”