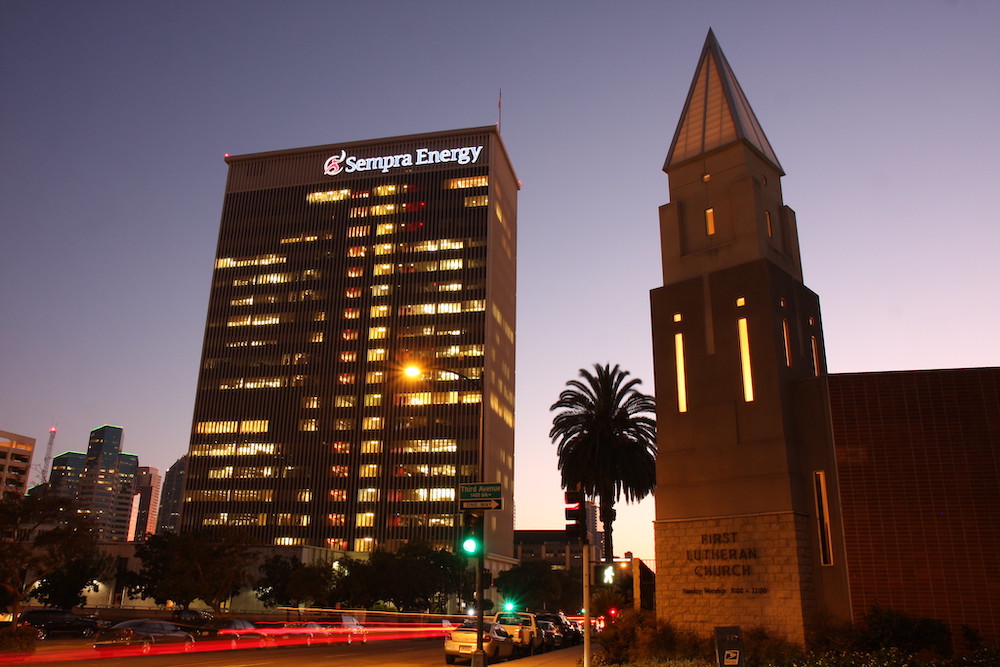 A 2009 photo of 101 Ash when it was Sempra Energy’s headquarters. Courtesy of Nathan Rupert/flickr.

As Californians figure out what to do with thousands of buildings made empty by pandemic and recession, we should hold ourselves to a baseline standard: Let’s not be as scared and as stupid as San Diego.

In recent months, America’s Finest City has seen its most civic-minded brains eaten not by zombies, but by a long-empty downtown office building. Perhaps compensating for the absence of typical Halloween rites, San Diegans have grown so frighteningly obsessed with the horrors at 101 Ash Street that they sometimes seem incapable of discussing anything else.

“Are we going to be proud,” asked Voice of San Diego CEO and editor-in-chief Scott Lewis in a recent Tweet, “that, during this pandemic, with our lives completely upended and the future of things like schools and libraries and the economy in doubt, so much of the local election was about this building?”

To make a long ghost story short, in 2016 the city government negotiated a complicated 20-year, $127 million lease-to-own agreement for the 19-story, 315,000-square-foot property. The deal was portrayed as a way to save $44.4 million and to house at least 850 city workers in a modern office building. Little more than a power wash would be needed before employees moved in.

That move still has not happened.

For reasons that are now the subject of constant speculation and investigation, city officials never inspected 101 Ash for ghosts, goblins, and other deficiencies before they signed on the dotted line. Eventually, it emerged that 101 Ash—which was built in 1968 for San Diego Gas & Electric and was most recently the headquarters of Sempra Energy—had asbestos contamination and issues with so many of its systems—electrical, elevators, plumbing, heating—that it would cost the city an additional $115 million to make the building safe to occupy. Meanwhile, the city has been left paying $535,000 a month to lease a space it can’t use.

The problems with the building received some notice in 2018, but they’ve exploded into public consciousness in this election year. Local media competed to offer new explanations of how the city could have been so dumb. (One outlet even published a piece based on forged documents.) An audit commissioned by the city showed that local officials accepted the seller’s claims that the building was in good shape. A reporter, using an investigative tool known as a “Google search,” discovered California Public Utilities Commission testimony from 2014 stating that Sempra had considered the building “functionally obsolete” because of asbestos and earthquake vulnerability.

Who’s to blame? There are so many different suspects that the fiasco resembles an English murder mystery—albeit one with more sunshine and better fish tacos.

The city bureaucracy has been blamed for incompetence, and some city real estate management employees were pushed out. Elected officials have been accused of politicizing city departments to the point that they were too cowed to challenge the lease agreement. The real estate company that brokered the deal has been blasted by everyone, especially since the contract had unusually strong language shielding the firm from liability. A previous owner of 101 Ash emerged to say he had notified the city about the asbestos and that the building had otherwise been in good condition before the city took it over.

Who’s to blame? There are so many different suspects that the fiasco resembles an English murder mystery—albeit one with more sunshine and better fish tacos.

The top candidates for mayor, City Councilmember Barbara Bry and Assemblyman Todd Gloria, a former councilmember, took responsibility while also shifting blame onto each other, and San Diego’s political culture. “I’m tired of us being a big city that acts like a small town,” Gloria declared during the campaign. “We keep making these small-town mistakes.”

As if to prove Gloria’s point, San Diego’s city attorney Mara Elliott added a note of small-time farce by trying to plug leaks from city council members and threatening criminal prosecution against a local journalist for possessing confidential city documents.

Calling the incompetence “impossible to exaggerate,” the San Diego Union-Tribune recited a litany of unforced errors over the past 25 years—from pension schemes to giveaways to the now-departed Chargers football team—and asked why the city can’t govern itself. Some critics pointed to the insular political culture, in which too few people talk to each other and share information. Others noted the outsized power of developers and campaign contributors, pointing in particular to a part-ownership stake in the building held by the powerful local businessman “Papa Doug” Manchester, a supporter of Mayor Kevin Faulconer.

The biggest share of the blame belongs to Faulconer, a moderate Republican who is leaving office this fall and had been considered the strongest challenger to Gov. Gavin Newsom in 2022. Faulconer, who made and promoted the deal, has damaged his credibility locally. If he still runs for governor, voters statewide should demand a full accounting.

But whoever is to blame, San Diego hasn’t produced any good answers yet for what to do about 101 Ash. Right now, the city wants to stop paying the lease and void the contract, which may only produce more costs in the form of legal damages.

Turning 101 Ash into a haunted house story for the whole state might be bad for Faulconer, but it would be healthy for Californians. We too often allow our leaders to rush into consequential decisions with little scrutiny, which is one reason why city halls in San Francisco and Los Angeles also face large and growing scandals right now.

More vitally, 101 Ash might get us to think more strategically about all the empty buildings the pandemic will leave behind. Californians might be tempted to laugh at this San Diego saga, but this movie is less Anchorman and more Paranormal Activity, the 2007 film about a couple who can’t figure out what is happening in the San Diego home they’ve just bought. And with office vacancy rates tripling over the pandemic, the rest of California could face similar nightmares.

Empty buildings are destabilizing anywhere because they are voids upon which we project our darkest fears (what might be lurking inside?) and our most peculiar ideas (what might we finally do with a blank slate?). In California, empty buildings can be especially dangerous, as our outsized dreams and powerful real estate interests make us do strange things.

California would do well to take this moment to survey and re-examine our entire built environment. What is the most efficient way to renew the state’s rapidly aging, decaying housing and building stock? Which empty commercial and office buildings should be knocked down for open space, and which might be profitably repurposed? Intriguingly, Prop 15, the property tax measure on the November ballot, might give us a clearer picture of our buildings, since it would require extensive new appraisals of commercial real estate over the next five years.

101 Ash may be empty, but it is full of lessons for Californians. Let’s not spend too much on our glut of empty buildings. Let’s not invest too many hopes in any single structure. And before you lease or buy your own haunted haunt, don’t be afraid to go inside and inspect the place for yourself