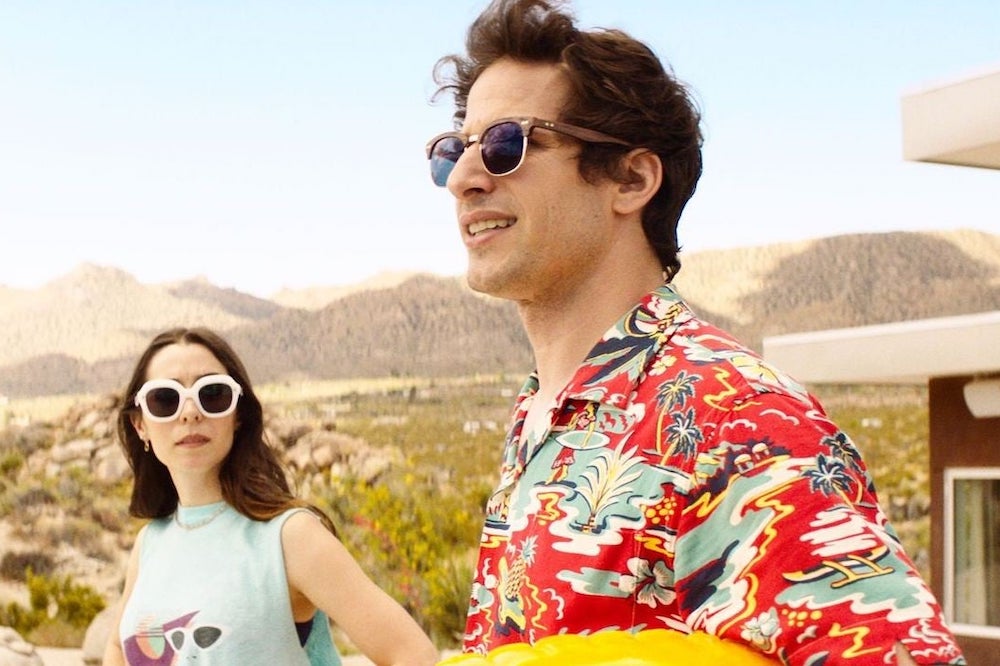 Unlike the film Palm Springs, our Irvine isn’t just waiting to be found. We must build it. Courtesy of Hulu.

In the best scene of any California pandemic-era entertainment to date, a middle-aged man named Roy (played by J.K. Simmons) sits in his Irvine backyard and advises Nyles (Andy Samberg) on coping with an unthinkable apocalyptic reality.

“I mean, it doesn’t get any better than that,” Roy says, surveying his suburban idyll in Orange County’s great master-planned community. “You’ve gotta find your Irvine.”

Nyles, who is in existential despair, is dubious. “I don’t have an Irvine.”

“We all have an Irvine,” Roy says.

The apocalypse, for Roy and Nyles—characters in the genre-bending sci-fi comedy film Palm Springs—is the result of wandering into the wrong cave in the Coachella Valley, after which they find themselves stuck re-living the same day over and over again. Roy, who bitterly blames Nyles for their “Groundhog Day” predicament, at first spends this endless time loop traveling from Irvine to the desert, where he tortures and kills Nyles, over and over again.

But late in the film, Nyles for the first time goes to Irvine, where he finds Roy unexpectedly content. Roy explains that he has overcome his homicidal impulses and learned to accept his strange existence. His peace of mind comes from embracing the chance to re-live the same day with his wife and twin children.

Do we all have that place, our own Irvine? And if so, how can we access it?

Those might be the great questions of this moment. What does it take to find some space and contentment as the world collapses around us? How does one find solace as basic social structures melt down?

It’s hard to be optimistic. After all, few of us could afford the real Irvine—where the median home price is north of $900,000, and the average monthly rent is approaching $2,500—even before COVID scrambled our lives, jobs, and schools. For Californians, the struggle to hold on to whatever meager piece of this state we currently have is an exhausting one.

Indeed, the version of the human predicament that Palm Springs offers us—stuck in a never-ending day of anxiety, phony love, violence, and bad weddings—is frightening, but nowhere near as scary as California’s future prospects.

Earlier this fall, the Institute for the Future, a Palo Alto-based think tank, constructed four future scenarios based on workshops and extensive study. The visions are pretty dark.

Do we all have that place, our own Irvine? And if so, how can we access it? Those might be the great questions of this moment. What does it take find some space and contentment as the world collapses around us?

The map and documents produced by the institute describe California, and American society more broadly, as stuck in its own endless loop. Our public spaces have been privatized and commercialized, undermining the civic sphere. Our educational institutions may produce some skilled workers, but not well-informed citizens. Our culture has been consumed by celebrity, and polarized. The health system is wasteful, expensive, ineffective, and unequal. Skepticism has been weaponized against science. And our political system is devolving into authoritarianism.

The pandemic has exposed these failures, and deepened them, laying bare the underlying fragility of our institutions. Our economic losses have erased the last decade’s growth, and our job losses are likely to be worse than other states’. Inequality is growing under COVID and our social fabric and supply chains are breaking. California’s ability to recover is deeply dependent on a robust and thoughtful pandemic response from our politically divided national government.

Even the more optimistic of the Institute for the Future’s four scenarios are dark.

The “Growth: Saving Capitalists” scenario shows fiscal stimulus restoring much of the economy, but without badly needed structural change. Employment would be slow to recover, in part because companies would turn to job automation rather than re-hiring workers. Educational and income divides would grow, and the benefits of the recovery would predominantly go to rich people and politically powerful sectors, like the tech companies and airlines. Low-wage workers would be shadowed by greater debt, mental illness, and unstable employment.

A “Constraint: Germ Pods” scenario envisions the reorganization of society around data systems and algorithms that entrench existing wealth and racial inequalities, and introduce new inequalities. This would be a segregated health dystopia. Under the guise of protecting people from disease and new pandemics, society would segment into geographic and digital clusters, or “germ pods,” separating those with access to testing and treatment from those without. The resulting discrimination—with separate schools, jobs, and public facilities based on your health status—would be justified on the basis of protecting public health and safety.

That sounds like paradise compared to the darkest scenario, “Collapse: Ungoverning,” in which military-style confrontation becomes routine in our streets. COVID-19 triggers more systemic collapses across the country, and the battle lines are drawn: “Red Hats against Blue Masks, militant police against unprecedented numbers of protestors, armed vigilantes against all calls for unity and a new order.” Mass deaths becomes acceptable, and with Red Hats dominating government, every city sees blue guerilla warfare. Police and military organizations divide, and fight each other.

“By 2030, the union is mortally fractured along political lines: cities, states, and regions are governed not by a single sovereign nation, but by a thicket of tenuous inter-jurisdictional agreements and looming violence,” the scenario map document reads.

The only ray of light comes from the “Transformation: Social Solidarity” scenario, and it feels improbable. Under this scenario, systemic breakdowns during the pandemic inspire a renewed public commitment to broad social agendas, and to greater collective well-being. The mutual aid arrangements of today evolve into new income and health supports, and society begins to transform and redesign its broken systems. Public education is reinvented around experiential learning, while new digital governance structures, including data unions, protect privacy and marshal digital power for civic purposes.

By 2030, a Global New Deal has emerged around “universal basic assets—every human’s right to the core resources that are essential to well-being.”

All four scenarios suggest that the future will turn on how we address our broken systems and faltering institutions. And the Institute for the Future argues for replacement over repair of systems. “Whether we simply shore them up as best we can or make major structural changes, will largely determine whether we see a decade of renewed growth or collapse, a reckoning with long-term limits to growth, or a deep shift in both economy and culture,” reads the Institute’s map of the scenarios.

The next decade, the map adds, “will call on us to find our way through the multiple collapsing systems.” And as these systems fail, “they also open pathways to something new—to truly bold visions of transformation that reinvent the way we work as a society, as an economy, and as friends and neighbors.”

California does have success in creating master planned communities, like Irvine. Now we need a plan for recreating essential social systems. In other words, our Irvine isn’t just sitting out there waiting for us to find it. Instead, we’ll have to imagine and build new Irvines for ourselves.