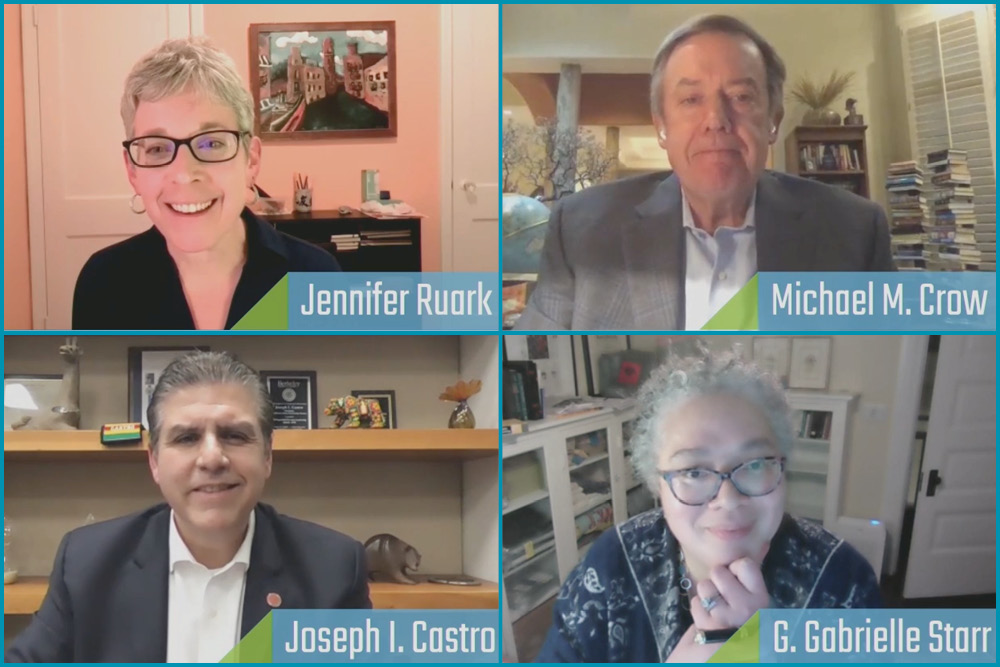 American higher education will not be the same after the pandemic. But in the wake of this crisis, what should be changed for the better? Zócalo brought together a panel of college and university leaders to discuss how institutions can innovate to meet students where they are for an event titled, “Can Higher Education Be Transformed to Better Serve Society?”

“The premise of this whole conversation is that higher education needs to be transformed,” said the evening’s moderator, Jennifer Ruark, deputy managing editor of The Chronicle of Higher Education. “Why,” she asked, “is there such a deep and extensive need for change?”

Arizona State University President Michael M. Crow voiced his concern about the classism that’s infected America’s colleges and universities. “One of the things we have messed up in higher education is that we have allowed ourselves to be socially hierarchically structured in a ranked system of status,” said Crow, who is also the co-author of The Fifth Wave: The Evolution of American Higher Education. “That is deeply and negatively impacting our society and it affects everything, and so we’ve got to figure out how to fix that.”

If one of the problems, Ruark said, is that the current system is built to reinforce competition among colleges instead of collaboration, “how do you overcome those forces in order to collaborate more?”

“There are enough seats in American higher education for every student who is qualified,” said Pomona College President G. Gabrielle Starr. She pointed to the common application, which allows students to apply to many colleges easily, as one example of how colleges have created an artificial sense of scarcity. “What we have to do is protect the ability of every kind of institution to fill those seats and give the best education. That is really my concern,” she said.

Joseph I. Castro, the former president of Fresno State and newly minted chancellor of California State University (CSU)—and a first-generation college graduate himself—agreed. “I do think there is a place for students who want access to higher education. We just need to work together to ensure that those who are place-bound, like those I used to serve in the Central Valley, that they have a place to go.” Castro said.

One of his goals is to enroll more first-generation students and families in the CSU system. “There are so many … in California and throughout the country that have not yet been touched by higher education.” But he is concerned about the pipeline to get them there. “I worry a lot about men of color.” he continued. “Because even as we’ve seen more students of color come to CSU, the number of males of color have not increased, and I do think that has something to do with how we’re educating our students in K–12.”

“There are enough seats in American higher education for every student who is qualified,” said Pomona College President G. Gabrielle Starr.

In what ways, Ruark asked the panelists, has the pandemic made them rethink higher education?

Starr said that Pomona professors have told her that the past 10 months have given them a better sense of who their students are. “They see their students in their homes, where they study,” she said. “You learn so much more about a student by being where they are rather than the student having to be where you are.”

Castro spoke to the hardships experienced by students, faculty and staff. “I can feel the stress,” he said. On the other hand, he added, CSU has also found new ways forward. “We’ve basically pivoted 80,000 courses virtually in just a few days,” he said—a “silver lining” to the pandemic.

Crow also spoke to the way the pandemic’s challenges have stretched ASU to grow. “We’re not even the same institution we were a year ago,” he said. “I’m optimistic about the ways in which we can be even more innovative in the future after going through this experience.”

A robust audience question and answer session—with questions submitted via live chat—addressed a range of issues. Why, asked one audience member, does America lag behind other countries in social mobility—and have colleges elsewhere done a better job of addressing this problem? “There’s a tremendous system of social mobility [in America], but one that has been lagging as our economy has become more mature and aged,” said Crow, referring to the last 40 years. “We have to go back and rethink this.”

Another audience member asked whether there’s a path to one California higher education system, to which Castro replied, “I am seeing silos break down.”

Ruark wrapped up the evening by asking the panelists a hypothetical: If you could wave a magic wand, what’s one change you’d make in higher education?

“No more rankings based on inputs,” said Crow. Changing the way schools are evaluated would create “massive change.”

Castro called attention to the thousands of Dreamers across the country who have remained in the U.S. thanks to the Deferred Action for Childhood Arrivals program and lack the financial support necessary to access higher education. “On top of my list is support for our Dreamers,” he said.

Starr finished off the wish list by touching on another group in need of more support: community college students. “[I’d] make it as easy as possible for students to go from community colleges to four-year colleges across every single state,” she said, “so that they can begin to maximize their educational attainment.” 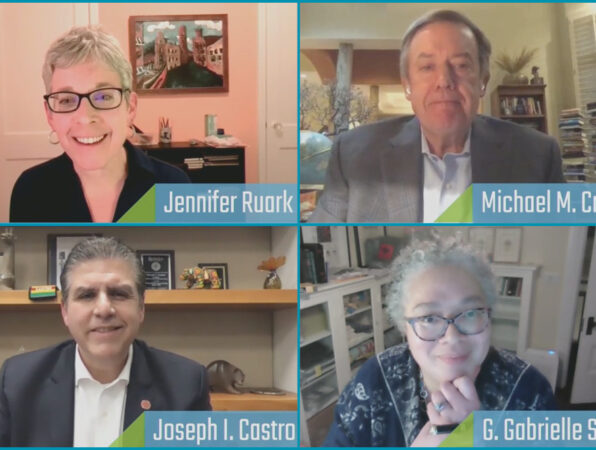 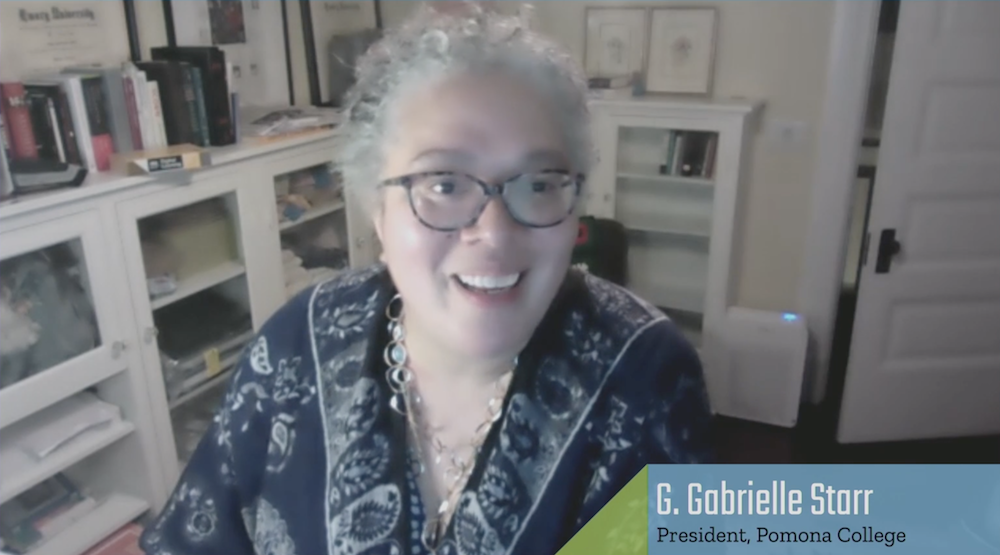 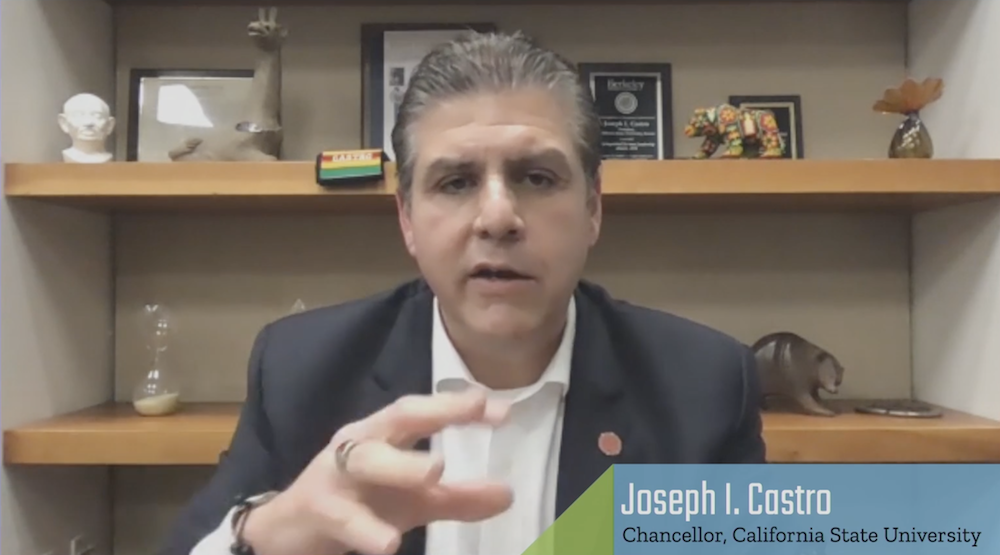 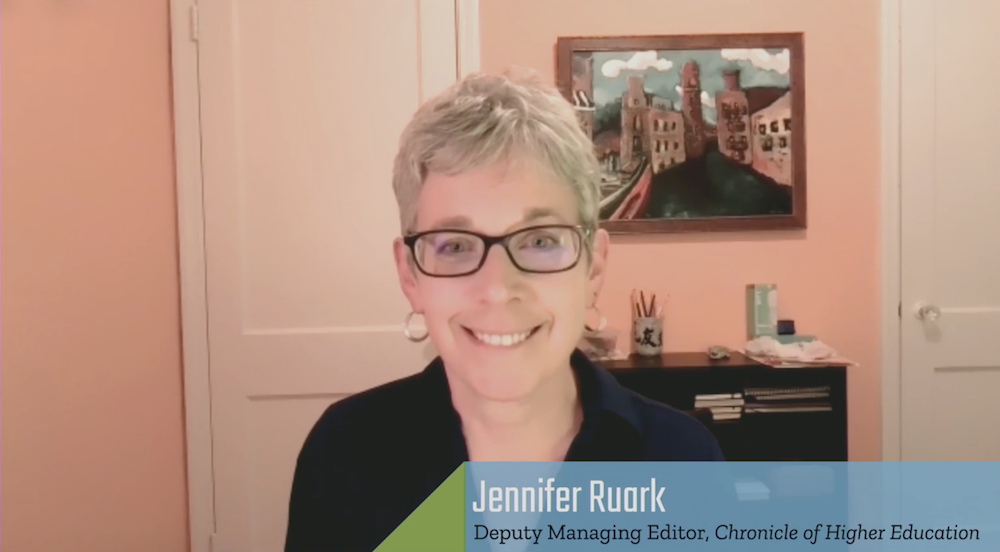 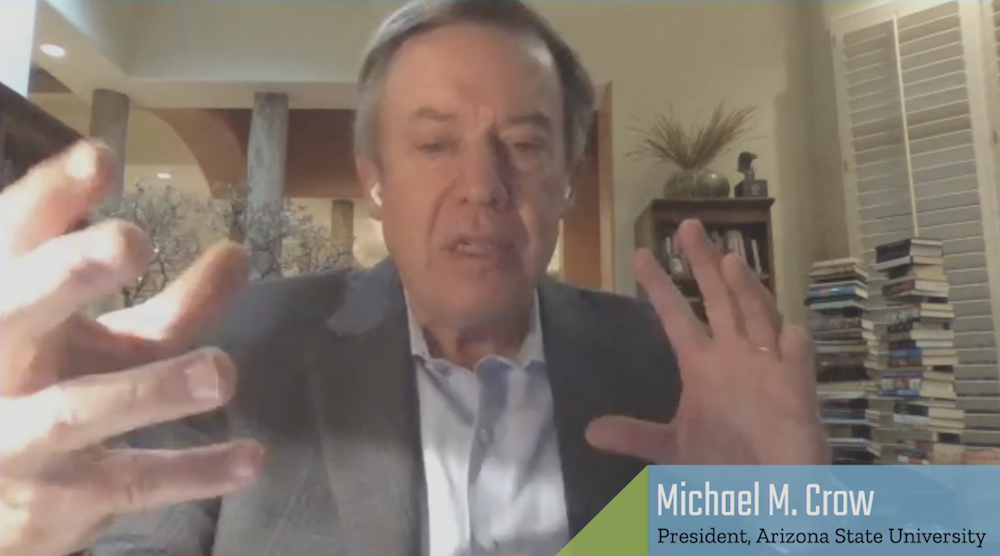