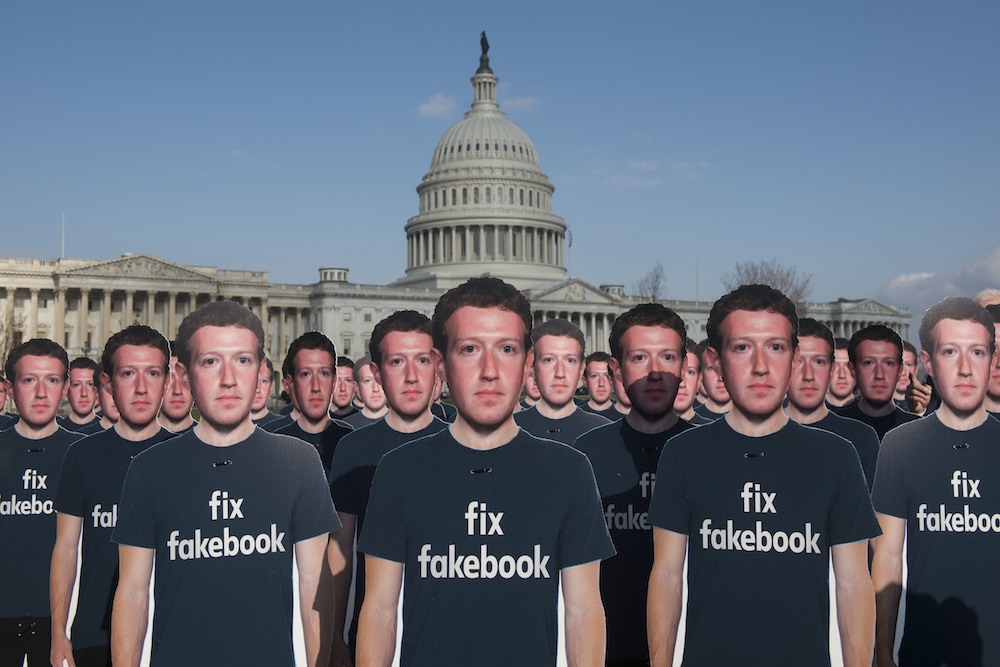 100 cardboard cutouts of Mark Zuckerberg stood outside the U.S. Capitol while Zuckerberg prepared to testify before the Senate on Tuesday, April 10, 2018. Courtesy of Kevin Wolf/AP images for AVAAZ.

Why do so many people, including both former President Donald Trump and new President Joe Biden, keep talking about getting rid of an obscure law called Section 230?

The short answer is that Section 230, part of the Communications Decency Act of 1996, is the legal underpinning for one of the largest and most consequential experiments in American history.

Since the birth of Big Tech Media 15 years ago—let’s drop the friendly-sounding misnomer “social” media—our nearly 250-year-old republic has become a test case. Can a nation’s news and information infrastructure, the lifeblood of any democracy, be dependent on digital media technologies that allow a global free speech zone of unlimited audience size, combined with algorithmic (non-human) curation of massive volumes of disinformation that can be spread with unprecedented ease?

This experiment has been possible because Section 230 grants Big Tech Media immunity from responsibility for the mass content that is published and broadcast across their platforms. A mere 26 words in the bipartisan law were originally intended to protect “interactive computer services” from being sued over what their users post, just like telephone companies can’t be sued over any gossip told by Aunt Mabel to every busybody in town.

But as Facebook, Google, Twitter, and other services scaled over time to an unimaginable size, the platforms’ lack of human editors has resulted in a gushing firehose of mis- and disinformation where scandals and conspiracies are prioritized over real news for mass distribution. Facebook alone sees more than 100 billion pieces of content posted each day, a deluge that its small corps of human monitors cannot realistically contain.

As the gripping videos and photos of a pro-Trump mob storming the Capitol make clear, this experiment has veered frighteningly off course. The protesters earnestly believed that they were trying to stop a stolen election, having been fed this false information by their political leaders for over two months since the November 3 election. Millions of people are now living inside their own “disinformation ghettos” where they do not hear contrary viewpoints. So, President Biden has called for ending Section 230 immunity in order to stop the Frankenstein’s monster this law helped create.

Facebook is no longer simply a “social networking” website—it is the largest media giant in the history of the world, a combination publisher and broadcaster, with approximately 2.6 billion regular users, and billions more on the Facebook-owned WhatsApp and Instagram. One study found that 104 pieces of COVID-19 misinformation on Facebook were shared 1.7 million times and had 117 million views. That’s far more than the number of daily viewers on the Wall Street Journal, New York Times, USA Today, ABC News, Fox News, CNN, and other major networks combined.

Traditional news organizations are subject to certain laws and regulations, including a degree of liability over what they broadcast. While there is much to criticize about mainstream media, at least they use humans to pick and choose what’s in and out of the newsstream. That results in a degree of accountability, including legal liability.

But Facebook-Google-Twitter’s robot algorithm curators are on automatic pilot, much like killer drones for which no human bears responsibility or liability. Non-human curation, when combined with unlimited audience size and frictionless amplification, has clearly failed as a foundation for our democracy’s media infrastructure.

So, it is time to hit reset in a major way, not only to save our republic, but also to provide the best chance to redesign these digital media technologies so that we can retain their promise and decrease their dangers.

Non-human curation, when combined with unlimited audience size and frictionless amplification, has clearly failed as a foundation for our democracy’s media infrastructure.

Revoking Section 230 by an act of Congress would be a good start. That’s not a perfect solution, but it would make Big Tech Media more responsible, deliberative, and potentially liable for the worst of its toxic content, including illegal content (like child pornography), especially when their algorithms automatically amplify such content.

But there is also a great deal of reckless online content that would likely not be impacted by 230’s revocation. For example, Trump’s posts on Twitter and Facebook claiming the presidential election was stolen, and his inflammatory speech that YouTube broadcast the morning of the Capitol attack, were false and provocative—but it would be difficult to legally prove that any individuals or institutions were harmed or incited directly by the president’s many outrageous statements. Any number of traditional media outlets also have published untrue nonsense without the protections of Section 230, yet they were never held liable.

The revocation of Section 230 also wouldn’t have stopped the use of Big Tech Media for disinformation campaigns that undermined elections in more than 70 countries, even helping to elect a quasi-dictator in the Philippines; or for widely amplifying and even livestreaming child abusers, pornographers and the Christchurch mass murderer of Muslims, who broadcast his carnage over Facebook (a video then seen on YouTube by millions). And losing Section 230 immunity wouldn’t impact the fact that a majority of YouTube climate change videos denies the science, and 70 percent of what YouTube’s 2 billion users watch comes from its recommendation algorithm.

So revoking Section 230 likely would not be as impactful as its proponents wish, or its critics fear. What needs to be done instead?

The federal government must intervene to change the way Big Tech Media operates. Facebook-Google-Twitter’s “engagement algorithms” recommend and amplify sensationalized, conspiracy-ridden user content for one reason—to maximize profits by increasing users’ screen time and exposure to more ads. In fact, the Wall Street Journal reported that Facebook executives scaled back a successful effort to make the site less divisive when they found that it was decreasing their audience share. Recently implemented warning labels are weak substitutes for actual curation. These greedy companies have purposely weaponized their platforms, and enabled the dividing, distracting, and outraging of people to the point where society is now plagued by a fractured basis for shared truths, sensemaking, and common ground.

In the face of such practices, our government must impose a whole new business model on these corporations—just as the United States did, in years past, with telephone, railroad, and power companies.

The government should treat these companies more like investor-owned utilities, which would be guided by a digital license. Just like traditional brick-and-mortar companies must apply for various licenses and permits, the digital license would define the rules and regulations of the business model (Mark Zuckerberg himself has suggested such an approach).

To begin with, such a license would require platforms to obtain users’ permission before collecting anyone’s personal data—i.e., opt-in rather than opt-out. When you signed up for a Facebook account, you probably didn’t imagine that 10 or 15 years on, you were unknowingly agreeing to allow the company to suck up your private data or track your physical locations, or mass collect every “like,” “share,” and “follow” into a psychographic profile that can be used by advertisers and political operatives to target you. Facebook and its fellow outlets started this data grab secretly, forging their destructive brand of “surveillance capitalism.” Now that we know, should society continue to allow this?

The new model also should encourage more competition by limiting the mega-scale audience size of these media machines; nearly 250 million Americans, about 80 percent of the population, have a profile on one of these platforms. Smaller user pools could be accomplished either through an anti-trust breakup of the companies, or through incentives to shift to a revenue model based more on monthly subscribers rather than on hyper-targeted advertising, which would cause a decline in users. The utility model also should restrain the use of specific engagement techniques, such as hyper-targeting of content, automated recommendations, and addictive behavioral nudges (like autoplay and pop-up screens).

We also should update existing laws to ensure they apply to the online world. Google’s YouTube/YouTube Kids have been violating the Children’s Television Act—which restricts violence and advertising—for many years, resulting in online lawlessness that the Federal Communications Commission should examine. Similarly, the Federal Elections Commission should rein in the quasi-lawless world of online political ads and donor reporting, which has far fewer rules and less transparency than ads in TV and radio broadcasting.

Like many other people, I have benefited from the internet and its revolution in communications. These businesses are creating the new infrastructure of the digital age, including search engines; global portals for news and networking; web-based movies, music, and live streaming; GPS-based navigation apps; online commercial marketplaces; and digital labor market platforms—services and technologies that are being interwoven into the very fabric of our societies.

I believe we can retain what is good about the internet without the toxicities. Like the promise of the internet itself, Facebook-Google-Twitter started out small, and then blew up into monopolistic giants that have established their own greedy and destructive rules that threaten our democracy. It is crucial that regulation evolves in order to shape this new digital infrastructure—and the future of our societies—in the right way.