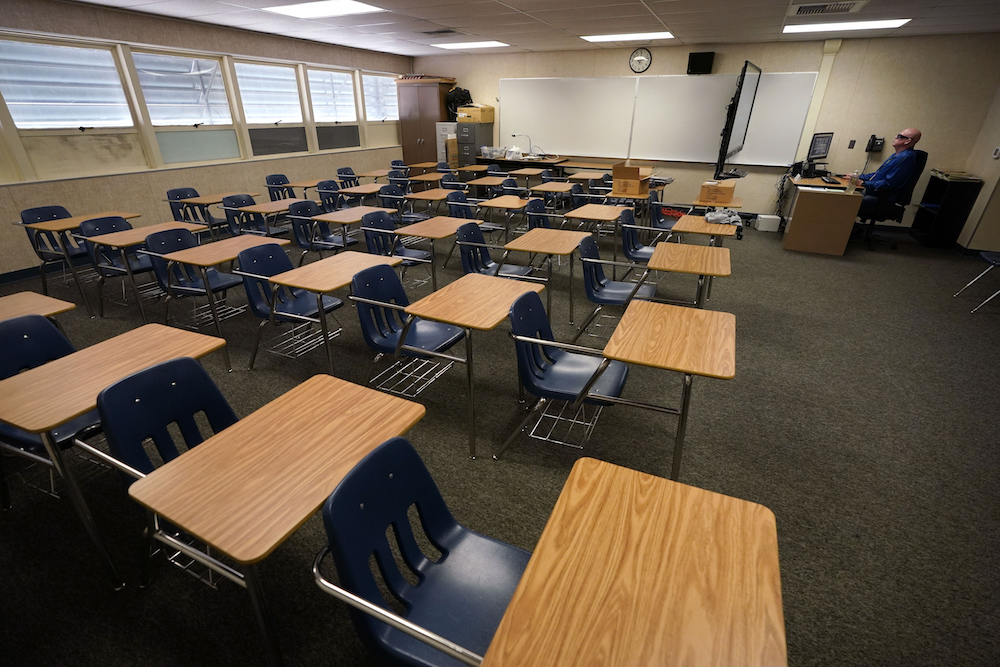 Many Californians say schools need to re-open now. But no one has had the guts to open all schools, and all grades, and actually send all kids back to class.

That’s why our current conversation about reopening public schools, after a year of COVID closures, is beside the point. So-called grownups are talking about when we might reopen, or the conditions under which we might restart certain schools or certain grades. But we never really answer the question of who—amid all the fear and politics—will pry open the schoolhouse door for every California child.

It won’t be the federal government. President Biden has effectively abandoned his pledge to reopen all schools in 100 daysthe first volume of a handbook for reopening, and the Centers for Disease Control continues to produce confusing guidance for whomever does the reopening, but neither has the authority to call class in session.

It won’t be state government. The Newsom administration loves to spin out new frameworks and matrices so that other levels of government can think about reopening. But if you really think this state will successfully execute a major logistical operation like school reopening, well… let’s just say there’s an unemployment check in the mail for you.

It won’t be our local governments forcing the reopening either. Our counties are consumed by their pandemic-era public health obligations. Our cities are criticizing or even suing school districts to demand schools reopen, but they lack the power to force classes back into session. Our school districts do have the power to reopen, and some are bringing back a few early grades, but for the most part, they’re caught between ever-shifting guidance from other levels of government, union opposition, and divisions among parents. Meanwhile, too many local school board members and superintendents, instead of fixing distance learning, are filling the hours with gaslighting communiqués, fruitless negotiations, or school-name changes.

Of course, our teachers’ unions, by far the most powerful political forces in this state, could force a reopening. But with their members able to work at home and still be paid, these labor groups just keep pushing back the timelines for return—until COVID is entirely gone, or all living beings in the Milky Way galaxy have been vaccinated, or the Rapture. Whichever comes first.

All these realities point to the same hard fact: California’s various educational constituencies are never going to come together and reopen all school themselves. If our state is ever going to resume universal public education, as required under its constitution, we Californians will have to outsource the task.

And given the scale of our state, there is only one entity that could pull this off.

Outsourcing school reopening to Amazon isn’t a radical idea. To the contrary, it perfectly fits our state’s COVID-era strategy: leave the hard work to somebody else.

Take masking. Officials at all levels have talked, incessantly, about the need for everyone to wear masks and keep our distance—but no one in power has been willing to enforce these regulations aggressively. The tricky work of compliance has been left to store employees and entrepreneurs who are trying to save their jobs and businesses, and to everyday Californians foolhardy enough to confront their maskless neighbors to slow the spread.

Instead of the state government and local school districts continuing to blast each other publicly, and instead of parents and teachers attacking each other over Zoom, we could all agree to blame Amazon.

A similar dynamic has emerged in vaccination. With the state and counties failing to turn their months of planning into an effective system for immunizing people, Gov. Gavin Newsom outsourced the job to the not-for-profit health insurer Blue Shield of California. This was achieved through an emergency authorization, without bids, and in the full knowledge that Blue Shield is not a health provider and has no real experience in putting shots in arms. What Blue Shield does have is skill in managing data, a statewide network, and a reputation for getting its way in California.

Outsourcing school reopening to Amazon follows similar logic. It’s not an education business, but it is great at data and operations. Amazon has the warehouses, supplies, and delivery network to get the right protective materials to the schools on time. (Maybe it could even pick up science-denying teachers from their homes and transport them to vaccination centers and then classrooms). Amazon also operates efficiently and cheaply—so a school reopening contract wouldn’t break state or local budgets.

But the real reason California needs Amazon for this chore is its scary ruthlessness, its willingness to ignore criticism and rules in the service of delivering on its promises.

Who will dare get in its way? Amazon owns the political class—just look at how it used donations and lobbying to win subsidies and tax breaks from state and local governments—so it doesn’t have to worry about politicians’ challenging its school reopening operations.

Amazon, famous for crushing small businesses that get in its way, also might be our best bet to shut down scofflaw retailers and other entities that, by not complying with COVID regulations, contribute to the community spread that might threaten school reopenings.

And Amazon, having fought unionization of its own employees nationwide, would probably revel at the prospect of putting California teachers and their unions in their place.

Because the company is so accustomed to being loathed, Amazon—worth a cool $1.65 trillion as of February 12—could be useful as a scapegoat for all of California’s anger and angst over school reopening. Instead of the state government and local school districts continuing to blast each other publicly, and instead of parents and teachers attacking each other over Zoom, we could all agree to blame Amazon.

I suspect Amazon would do this if asked. Amazon recently wrote President Biden to offer “to leverage our operations, information technology and communications capabilities and expertise” in this emergency. And given its diminished public reputation, including questions about how its treatment of warehouse workers during the pandemic, Amazon would likely seize such an opportunity to build some good will.

Few school leaders will admit this publicly, but they would be delighted if Amazon—or another outside entity—stepped in to handle reopening. Such an intervention might be the only way to save a California education system that is falling apart. School enrollment has seen record declines in the pandemic, and many families with school-age children are leaving the state. Even stalwart supporters of public schools are now talking up private schools or school vouchers.

In other words, California faces its own school choice: Outsource school reopening now, or watch its schools crumble as families outsource their children’s education somewhere else.