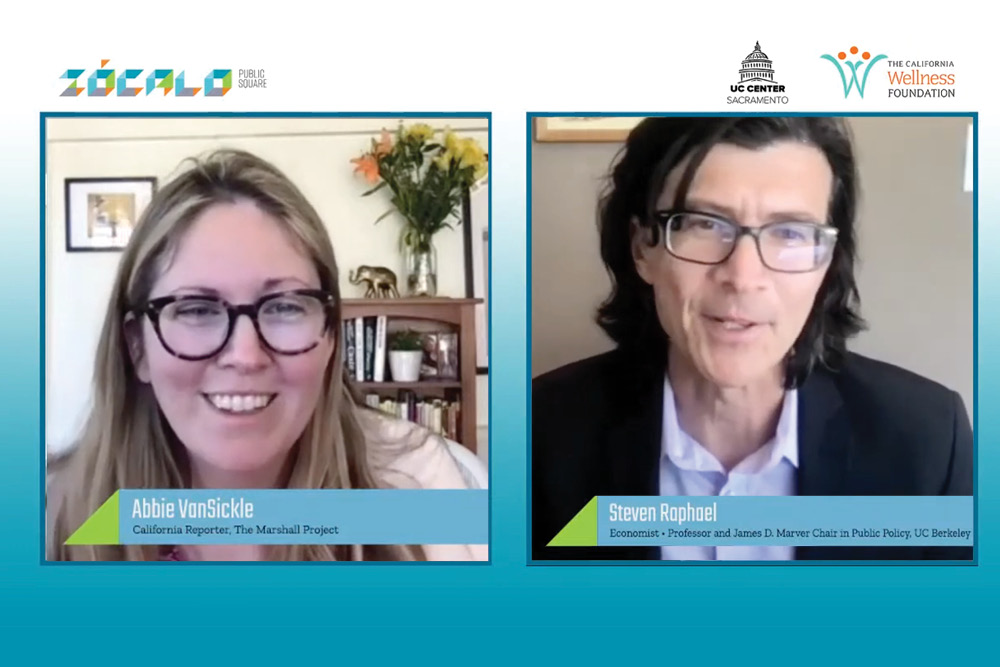 Over the past decade, California has made real progress in reforming its criminal justice system and reducing its prison population, but the state’s era of mass incarceration is far from over.

“We can objectively say no, just by the numbers,” Raphael said when moderator Abbie VanSickle, the California reporter for The Marshall Project, directly posed the title question to him during the conversation. While the incarceration rate has fallen from 488 people per 100,000 in 2006 to 310 people per 100,000 today, Raphael said, that rate is still three times higher than the 100 per 100,000 rate the state saw in the 1970s. “We still have a lot of people incarcerated,” he added.

The event, which went far beyond statistics, dove into California’s history service of incarceration in service of understanding the major changes we’re seeing in the state’s prisons, jails, and parole and probation systems today.

Raphael noted that prison overcrowding has been a problem since the state’s founding in 1850, and the construction of San Quentin two years later. But the late 20th century stands out as an inflection point in that history. From about 24,000 people in state prisons before 1980, a wave of sentencing changes and tough-on-crime measures significantly increased the state’s incarcerated population. By 2006, when the state prison population peaked, there were about 175,000 people in prison Raphael said. (The number of people on parole, probation, and in county jails, which hold those awaiting trial or serving shorter sentences, also increased, he noted.)

In response to VanSickle’s question—whether this huge rise in incarceration was intentional—Raphael made two points.

First, he noted that sentencing reforms in the 1970s were motivated by concerns similar to those of today’s criminal justice reformers—that the system produced unequal, unfair, or racially discriminatory results. But that earlier wave of reform—replacing the “indeterminate” sentencing with the seemingly fairer rules of “determinate” sentencing—had unintended consequences, as the system lost the ability to treat individuals differently, based on their rehabilitation work. When tough-on-crime laws and ballot measures arrived in the 1980s, there was no way to slow the explosion of incarceration, and more people went to state prison for longer periods of time.

“Overall, we don’t see a big impact on reported crimes despite the fact that we have much fewer people incarcerated,” Raphael said.

Raphael said that California made small reforms after 2006 to try to reduce the prison population, and improve the poor quality of medical and mental healthcare in the system. But it took a 2011 U.S. Supreme Court decision—which ordered California to reduce its prison population, then at nearly twice its capacity, to 137.5 percent of capacity—to begin the current era of reform.

That order, Raphael explained, led to a decade of criminal justice overhauls by legislators and voters.

A 2011 law, AB 109, commonly referred to as “realignment,” diverted non-serious, non-violent, and non-sexual offenders who previously went to state prisons into county jail, probation, or diversion programs. AB 109 produced a 30,000-person decline in the prison population in less than a year, and reduced weekly admission from 2,000 a week to 500 a week, Raphael said.

Further change, and further prison population reductions, were driven by voter-approved measures—2012’s Proposition 36, which changed the state’s “three strikes” law; 2014’s Proposition 47, which redefined as misdemeanors some offenses charged as felonies, leading to a drop in re-arrests of prisoners; and 2016’s Prop 57, which added more flexibility to sentencing. He said that 2017 and 2019 laws to eliminate some sentencing enhancements also made a difference.

Throughout the conversation, VanSickle pressed Raphael to talk about the impacts of these changes—such as the rise in county jail populations that coincided with the decrease in prison populations. One of the most intriguing impacts, Raphael argued, has been on racial disparities in the criminal justice system.

Raphael said he and his research colleagues found that a narrowing in racial disparities among felony drug arrests occurred “almost instantly” after the enactment of Prop 47’s provisions turning some felonies into misdemeanors. In particular, the professor said, “you see this stunning shift in the felony drug arrest rates for African American men, to the point where it’s below the rate for white men before Prop 47 went into effect.”

“Most of these reforms were not enacted with racial disparities in mind—they were enacted to be fairer, to moderate, to not have such stiff sanctions, and under pressure of the federal court,” he said. But in looking at numbers on race and rates of incarceration, re-arrest for prisoners, and pre-trial detention of arrestees, “all these disparities narrowed.” That’s because “the criminal justice system generally has a disproportionate impact on the African American population, and to a much lesser degree, the Latino population … Moderating those sentencing practices certainly doesn’t eliminate, but tends to narrow, disparities in the outcomes we see,” he explained.

In response to questions both from VanSickle and audience members in the YouTube chat room, Raphael debunked claims, often aired in media or by politicians, that prison reform has produced a big rise in crime. There has been no measurable increase in violent crime tracked by the FBI, and research suggests only a small effect on auto theft, he said.

“Overall, we don’t see a big impact on reported crimes despite the fact that we have much fewer people incarcerated,” Raphael said.

Throughout the talk, Raphael emphasized how much is not understood about the full effects of specific reforms now being considered and discussed—from eliminating cash bail to restorative justice to alternative courts that focus on drugs, behavioral health, or charges involving veterans or young people.

He also cautioned that changes in incarceration aren’t driven just by changes in the law. He pointed to a “remarkable pattern being observed across the country”: a recent, sharp decline in the number of arrests of young people, ages 18 to 25, which is also reducing the flow of young people into jails and prisons.

What explains the decline? Research points to varied explanations, said Raphael, from higher education levels to young people spending more time online and playing more video games. “Young people for whatever reason are not getting into as much trouble today as they did in the past,” he said. “If that were to continue into the future, that alone would moderate prison populations in the United States.”

During an audience Q-and-A session, Raphael addressed questions about plans to close California prisons (any closures need to be preceded by more sentencing reforms), about the role of “progressive” prosecutors in reducing incarceration (look to the vast differences in incarceration rates among California’s 58 counties, each with its own district attorney), and about changes in terminology around prisons (some are now calling the “criminal justice system” the “criminal legal system”).

In response to multiple questions, VanSickle and Raphael also spoke about the impact of COVID on incarcerated individuals, including an outbreak at San Quentin last year. In March 2020, Raphael noted, there were about 124,000 people in the prison system. That number has now dropped to 94,000 because of the accelerated release of some vulnerable prisoners, and reductions in transfers to prisons from county jail. But Raphael said he suspects that drop is temporary and that the population will go back up when the pandemic recedes.

In closing, Raphael noted that while California has brought down its incarceration rate, it still incarcerates people at a significantly higher rate than other states—notably New York, Washington, and Massachusetts—and other nations.

“We’re not a European country yet,” he said. 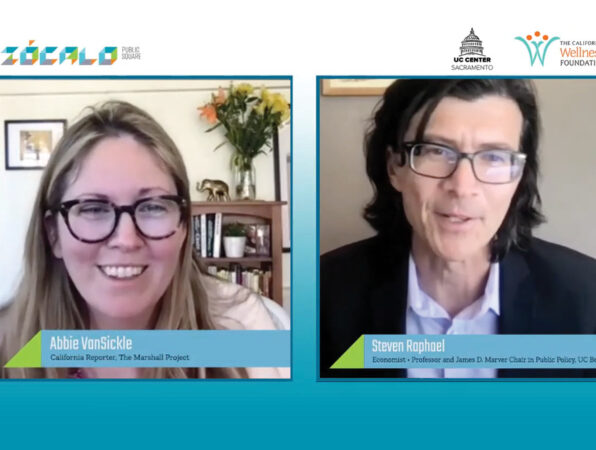