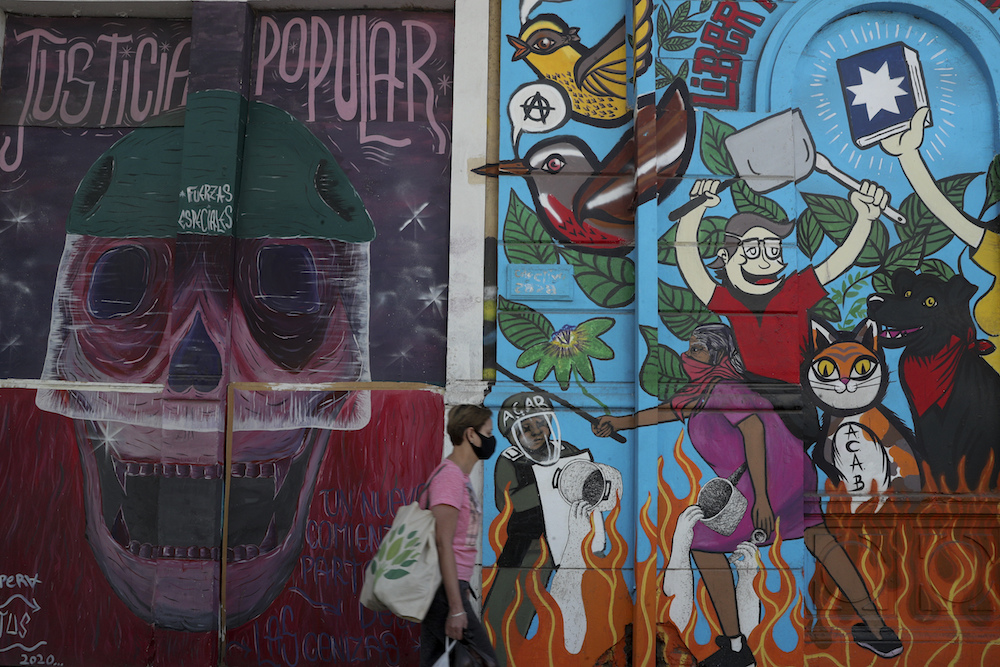 A man walks in front of a mural in Santiago, Chile, with images referring to the protests that resulted in a referendum to decide whether the country should replace its 40-year-old constitution, written during the last military dictatorship. Courtesy of Esteban Felix/Associated Press.

Chile is raising hopes and winning praise worldwide as it elects delegates to a new convention with the goal of replacing the current constitution, a 1980 product of Augusto Pinochet’s dictatorship. But from here in Santiago, where I live and work as a political scientist, the path to a new, and more democratic governing document looks full of dangers, some of them posed by democracy itself.

The high expectations surrounding Chile, population 19 million, now reflect just how distinct its history and present are. It was the first country in the region to elect a Marxist as president (Salvador Allende in 1970), but also one of the last countries to transition fully to democracy. Its economic reforms made it the toast of neoliberals (Chile has been called “The Tiger of South America”), putting the country on a wealthier plane than Argentina, Brazil, or my home country of Uruguay.

I arrived in Chile in 2003 to take an academic job. Chile wasn’t my first choice, but the economic situation was too dire then in Uruguay and Argentina. Settling in Santiago, I immediately appreciated the higher incomes, the controls on inflation, the growth and sober political leadership. But as I built a family and life here, I’ve come to see Chile as both a challenge to the conventional wisdom that economic growth strengthens democracy, and as a paradox of rising expectations that has yet to be resolved.

The heart of the contradiction is that the economic reforms in Chile—which brought many Chileans out of poverty, enriched some middle-class people, and made some Santiago neighborhoods as glossy as Manhattan—have also stratified society and destabilized democracy. As some Chileans’ economic situation improved and the image of the country as a wealthier place went global, people expected better healthcare, retirements, and other services than governments could deliver. And meeting higher expectations—for more education or a better quality of life—cost more money and produced more debt, leaving Chileans increasingly vulnerable to the international economic shocks of recent years.

The growing spread between expectations and reality has led to rising public anger—and more of a focus on the failures of Chile’s still young democracy and its inflexible constitution.

Chile’s political system provided stability, but not representation or vehicles for change. Chile was divided into 60 districts, each of which elects two members to Congress. That setup effectively made elections predictable; with proportional representation, almost every district elected one member of the ruling party, and one member of the opposition. There was no room for a third party or outside political force to win representation. Over the years, political parties, knowing they didn’t need to talk to voters, lost touch with the street, and politicians became older than the national population. Most Chileans stopped bothering to vote (for example, in the last presidential election of 2017 less than half of registered citizens voted).

A popular explosion of anger was inevitable. The ignition could have been anything. It turned out to be an October 2019 decision by the government to increase the price of subway fares by the equivalent of six American cents. Here was a clear case of an unaccountable government adding to the burdens of citizens. Protests were started by high school students at a subway station, and soon took over the streets, with university students, unions, and unorganized people participating. Police and citizen violence ensued. (One of my students was among the first to be shot.) By November, the military and its tanks were in the streets. I was afraid of a societal collapse.

Protestors were demanding more than a rollback of the subway fare; they wanted a democratic change in the system, and among their requests was a public vote on a new constitution. The inherited charter feels more like a straitjacket rather than a consensual agreement.

The government dealt with the upheaval as a foreign-import movement that tried to destabilize the country. Yet, the public embraced the call with such force that the authorities, who had long protected the system, couldn’t say no.

The pandemic slowed the protests, but the drive for constitutional change continued. In an October 2020 plebiscite, 78 percent of voters supported a new constitution, and 79 percent voted for a completely elected constitutional convention as the way to do it (instead of a mixed body of parliamentarians and elected citizens).

A new democratic constitution could be a game-changer for Chile, especially if it’s short, simple, and allows enough flexibility for elections and democratic politics to spark change within the system. But the situation is risky, and the final outcome on a constitution is deeply uncertain—because of all the elections that are set to happen between now and the 2022 plebiscite.

That verdict raised hopes that real change was coming to Chile, and global headlines ensued. But it was only the beginning of a long journey across a democratic minefield, and a new constitution remains far from assured.

One of the main obstacles is all of the different votes that will take place before a constitution can be drafted and presented to voters for ratification.

As I am writing this note, the first complication is evident: COVID. If parliament approves the government’s measures, elections for the convention will be delayed by more than a month to mid-May. Concurrent with Chile’s municipal elections, there will also be a national vote to elect the 155 members of the convention—138 will be elected by districts, and 17 elected by Chile’s Indigenous people in a nationwide constituency.

The election is full of novelties. There are about 1,400 candidates for these convention posts; refreshingly, 80 percent are first-time candidates for office, and nearly half are younger than 40. The slates emphasize independence; among the groups running are “Independents Like You,” “Independents for Chile,” and even “Independents Without Godparents” (a way of saying they belong to no one).

This election also opens the door for a truly revolutionary change. Candidacy lists must be headed by women and then gender is alternated (woman-man-woman-man, etc.). Moreover, parity is a requirement in the results. (If, in a given district of four members, four men are elected, the two men with the least votes will lose their positions in favor of the two women with the highest vote totals in their respective lists.) If this whole process arrives at a safe harbor, Chile will have the first gender-equally drafted constitution in human history at the national level.

The members of the convention will have one year—from mid-2021 to mid-2022—to draft a new constitution. Once they are done, there will be a plebiscite to approve or reject it.

A new democratic constitution could be a game-changer for Chile, especially if it’s short, simple, and allows enough flexibility for elections and democratic politics to spark change within the system. But the situation is risky, and the final outcome on a constitution is deeply uncertain—because of all the elections that are set to happen between now and the 2022 plebiscite.

The May elections for the convention members will coincide with local elections. Then, an already intensive electoral year must be compressed even further. During this year Chileans will also have a second-round vote in elections for regional governors. In July, we will have national primaries. In November comes the general election (for Congress and the Executive). In December is the run-off for the presidency.

Every single one of these elections has the opportunity to raise new conflicts and open up new debates that could undermine support for the process of creating a new constitution. Officials elected in 2021—from the national president to local mayors—may be wary of changing the governing system of the country in 2022. The right wing is already opposed to deeper changes.

And the political inexperience of the convention delegates—so appealing now to a country starved for change—could become a liability. These newcomers might be inclined to draft a document that is ideologically polarizing or makes too many mistakes. The young convention delegates might also be outmaneuvered by more experienced officeholders and interest groups in the 2022 contest over a new constitution. The people themselves—after so many elections, the pandemic, and the popular uprising—could became wary and reject further change.

Conflicts on the streets could also change the political context. Police violence remains a big and polarizing issue; so is illegal immigration and asylum seekers, who are mostly from Venezuela and Haiti. And the country has no single unifying figure, or institution, that has credibility with all the political players. Chile is a minefield, and every step could bring an explosion.

My hopes for this process are fewer than my fears.

I fear greater social conflict in the year ahead. I fear that if our constitutional project fails, Chile will waste this unique high-profile opportunity to remake itself. And I fear that, if adopted, a new constitution will be badly flawed—and might ultimately disappoint Chileans when it doesn’t solve all of our structural problems.