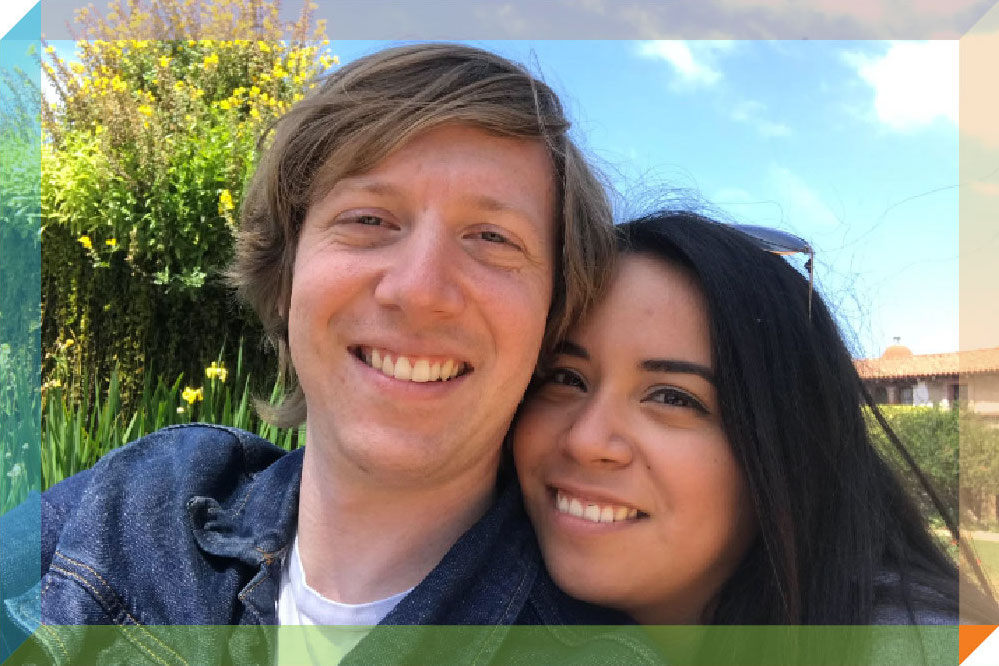 John Perry and Janeth Estevez. Courtesy of the authors.

Long before we started a travel blog, transit was what brought us together. We met as coworkers at an art museum in Los Angeles, and after work we’d take the same train back to Union Station, where we’d part ways and head in opposite directions. Our brief, shared section of our commute home was how our relationship started, joking about the absurdities of the job and sharing our interests. Pretty soon, we were waiting for each other after work to share as many moments on the train as possible. A couple months later, we were officially dating. 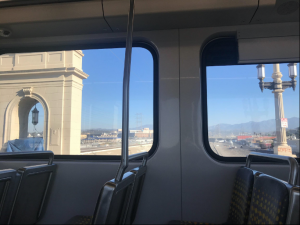 We spent a lot of time learning about each other’s favorite places around Los Angeles. Our conversations motivated us to actually investigate the places we had long been curious about. Since workdays were intended for one destination and never allowed the opportunity to explore the stops we passed along the way, we replaced the monotony of going to work with trips to places across the city, learning about the history of our communities, and having fun. Transit stopped being a line from point A to point B. If we wanted to get to point B, we could—and did—make stops along the way.

Transit became not just our means of getting around, but also our way of feeling connected with the outside world. Taking the train to work each morning offered wonderful views of the mountains, the gleaming downtown skyline, and the neighborhoods we passed through. Our fellow riders gave us a sense of the lives we shared the city with, its vitality and diversity. Major events—like protests or strikes or championship celebrations—have a way of spilling out into the transit system and bringing out a sense of shared identity and community.

Union Station took on a deep personal significance. Under its high-vaulted ceilings, we would meet up on our way to work or before venturing out to explore the city. We would pause to grab a coffee and admire the station’s golden hues and tranquil courtyards, or watch the trains rumble out of the yard. Then we would get swept up in the throngs of passengers rushing to their next train as we set out to find something we hadn’t seen before. For one of us—a transplant to LA—changing trains in Union Station was literally their first experience of Los Angeles, making it the natural starting point to take in as much of this new, unfamiliar, and exciting place as possible. As a Los Angeles native, the other was rooted in local tradition and culture, with limited experience beyond East L.A. Exploring the city together led to conversations about the urban changes and development of each neighborhood. And we would trade historical knowledge for the memories and nostalgia for what L.A once had been. We experienced the city through each other’s eyes and witnessed the lives of all the amazing people who contribute to L.A.’s essence.

A city this vast is too much to take in all at once; you can only wrap your mind around it by breaking it down into smaller pieces. For us, we broke it down along the transit lines, learning Los Angeles one route at a time.

We explored the different communities along the Gold Line, starting with Chinatown and Boyle Heights. It’s easy to recommend the beautiful and enchanting neighborhood in Chinatown, where the neon lights dance on reflective surfaces as you walk down the street. Or strolling through Boyle Heights on a weekend night, when the aroma of carne asada wafts from every corner taco stand. The more we explored, the further out we traveled, eventually finding hiking trails that offered an escape from the city, with tall shady trees stretching above your head and parakeets loudly chattering as they soar from one tree to the next.

A city this vast is too much to take in all at once; you can only wrap your mind around it by breaking it down into smaller pieces. For us, we broke it down along the transit lines, learning Los Angeles one route at a time.

Along the Blue Line through South Los Angeles, we found beautiful places and wonderful people. In Watts, while disappointed with the scaffolding covering Watts Towers, we found friends willing to talk to us about art in the community. A little further north we found the Alameda Swap Meet and El Faro Plaza, two large warehouse spaces bustling with Latino entrepreneurs and delicious scents from tacos to raspados. In these spaces we found people who showed us the true meaning of community and togetherness. If you have a creative spark in you, the friendly faces in Watts will take you in. And if you are looking for a lively space to watch a game and eat tasty food, the people in El Faro Plaza are there for a good time.

With the Red Line, we ventured past the Walk of Fame and through the Hollywood Hills. While known for impeccable homes, we found secluded streets with wide-open vantage points of the city and a neighborhood intended for pedestrians, with small walkways and staircases. It felt like stepping away from the city; our senses were tuned to the fragrant smells of flowers and fresh air, birds chirping, and dogs barking as we walked past. And even while we were standing in the center of the city, the sounds of cars and trucks were faint and barely noticeable. 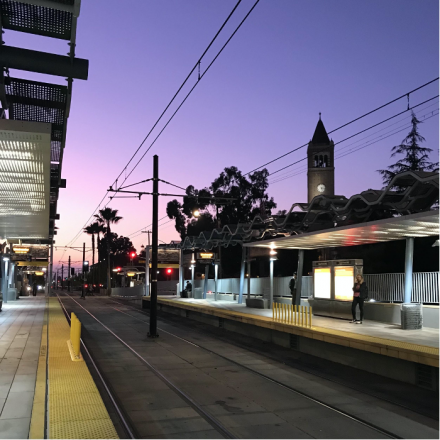 Riding the train at dawn is possibly the most peaceful way to encounter L.A. When the sun is rising over the east, you hear the city waking up. But even before that, you will find Latina women bundled up in scarves and sweaters already boarding buses and trains to move across town. They traverse the city as they travel from the Eastside to their housekeeping jobs on the Westside. Bundled all the way to the top of their heads, lugging large thermoses filled with coffee to drink and wake up as they move. These women would share stories about the large mansions they worked in. These large glamorous homes were meant to look untouched and pristine, and while they maintained these homes, these women would also have to keep an eye on the curious children who needed to be cared for. They would then take the transit system back home, where their work continued as mothers.

The pandemic has limited our movement and put a hold on our adventures. We can’t see new places or stumble upon old friends on our regular commute. The pandemic robbed us of the connection with the outside world that transit offered. We miss the community of people who used transit on a regular basis and were happy to share stories and chat. Now people limit their movement and faces sit behind masks as people protect themselves from the virus. Right now, the trains don’t feel like they have that love and energy we used to encounter, but we look forward to the day that everything begins to buzz with excitement again. 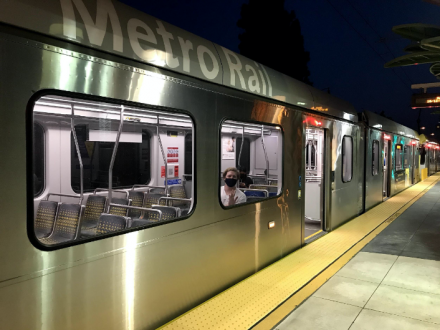 We’ve long wanted to illustrate how transit can be an excellent means of seeing the city. As the pandemic dragged on, we finally conceived Transiting Los Angeles as a way to share the places that we’ve fallen in love with to inspire others to explore them as well. We think of our blog like a series of postcards: “Wish You Were Here.” Despite our different perspectives, transit has shaped a common understanding of our home. While we try to pick up the pieces of our lives amid all this uncertainty, it’s nice to remember that there are still wonderful places within reach. Los Angeles will be forever changed by the pandemic, but whatever comes next, transit will always take us where we need to go.