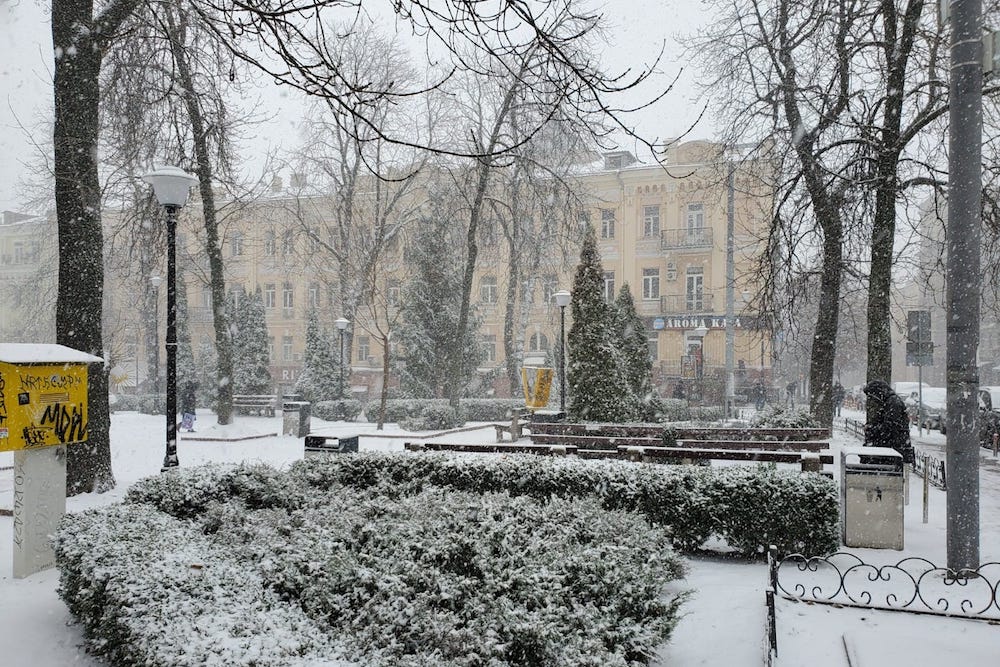 Kyiv, Ukraine’s capital and the seventh-most populous city in all of Europe, is governed by a strange combination of a Soviet and a post-Soviet mentality. Many have no trust in the government based on decades of communist misinformation, while others follow public instructions without question because that is what they have always done.

Originally from Alabama, a state with no shortage of divides, I have lived all over the world—four continents and counting. But I have never experienced a society so divided over the very nature of reality. As a country, Ukraine has seen three revolutions in the last quarter century, which has left an indelible emotional stamp on the inhabitants that manifests itself in unpredictable and creative ways on a daily basis. Spending much of my time here, I always feel like I am teetering between overbearing collectivism and out-of-control individualism, between the past and the present, and between Ukraine and a Russia that constantly meddles in internal politics.

With this uneasy reality as a backdrop, Ukraine struggles with COVID. After three quarantines and lockdowns and one of the highest infection rates in Europe, Kyiv is split between those who will wear their masks and think of their fellow citizens, and those who behave as if they are immune from the ravages of the virus, and call mask requirements an infringement of their rights. People here openly say that COVID is nothing more than a mass government attempt to control our minds.

Such attitudes, combined with Russian disinformation campaigns, have plunged public support for vaccinations here to record lows. Politicians have gained attention by playing on these public fears that vaccinations are unsafe; some fear is rational. Fake COVID tests have become commonplace, and many people see the haves vaccinating themselves, while the have-nots struggle to survive. At the current vaccination rate, Ukraine’s population of 43 million won’t be immune until 2030!

As an American living here, people assume two things about me: that I have money, and that I have some magical power to secure visas to the U.S., which became increasingly difficult to get during the Trump Presidency. My daily routine, when I am on the streets, involves explaining just how powerless we Americans really are in navigating the bureaucracy.

I have mostly avoided crowds during the quarantine. Rather than take mass transit, when I need to get around, my preference is to walk. A beautiful city on the surface, Kyiv’s infrastructure is a fragile and deteriorating holdover from the Soviet era. Gig companies like Uber prosper because you cannot count on the metro or the buses. I find it is easier—and often faster—to cover Kyiv on foot, given its terrible traffic jams.

Spending much of my time here, I always feel like I am teetering between overbearing collectivism and out-of-control individualism, between the past and the present, and between Ukraine and a Russia that constantly meddles in internal politics.

Each morning, I walk to my favorite breakfast place, while watching the social structure of this city that was a Soviet Union gem until 1994 play out on the dilapidated streets of the city. One can’t help but notice the unusual number of Bentleys and high-end Mercedes Benzes speeding by, driving as if no laws can constrain them, next to the 30-year-old Russian-made Ladas that meander slowly, carrying their occupants to their jobs in the concrete jungle of Soviet-era office buildings. Likely, 75 percent of the cars I will see on my morning walk are from the U.S., totaled for insurance purposes with no chance of a life on the streets of most American cities. But given the horrendously low salaries of even Kyiv’s best and brightest, this is the only way to afford a dependable and respectable car in the country, since new cars are simply financially out of reach.

No matter the driver or quality of the car, one must watch carefully crossing the street, since the green man signaling that it is safe to walk bears no semblance to reality. Cars here are notorious for ignoring traffic lights, and in a city where parking on sidewalks is the norm, pedestrians are simply viewed as the equivalent of a cockroach that must be crushed when they get in the way. 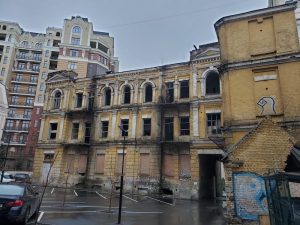 I won’t disclose the name of where I eat my breakfast since, like many establishments in the city, it has put paper in the windows so as not to be seen as open for business during quarantine. I see the same papering-over when I go by the gym, try to get a haircut, or stop by a local store or mall.

This quasi-openness, especially of the restaurants for their regular customers, is possible because the local police reportedly receive a bribe to look the other way—most of the time just from the restaurant owner, but occasionally some overzealous officers target the patrons as well. In some cases, the show of law enforcement at a restaurant is not because of violations of the quarantine, but simply a continuation of the culinary war in the city between the restaurants backed by either a Russian or Ukrainian oligarch. But regardless of who the owner is, it must be noted that the quality of the food in Kyiv is some of the best in Europe. That fact alone warrants a trip to Kyiv and the occasional intrusion of a mafia-related culinary conflict.

The Russian and Ukrainian mafias here operate collaboratively—though when at odds, they have no problem showing their unhappiness with the people being the sacrificial pawns in the conflict. Wealthy oligarchs fund both legal and illegal enterprises, and toy with Ukraine’s future prospects, sometimes aligning with Europe to the West, and sometimes with Russia to the East, depending on what is best for their political and financial interests.

Prior to the pandemic, tourism to Kyiv was on the rise due to its close proximity to Chernobyl—the site of one of the worst nuclear power plant disasters the world has seen. Day trips to Chernobyl were easy from Kyiv, and the numbers were increasing daily given the success of the HBO series by the same name. The Chernobyl disaster, only 60 miles from Kyiv, could have wiped out this city of millions if the wind had simply been blowing in a different direction the week of the explosion. Chernobyl continues to be a gift from Russia that keeps giving: It has not only cost the country and the world billions of dollars to contain, but Ukrainians west of Chernobyl continue to experience cancer-related deaths at a higher rate than anywhere else in the country to this day because of the deadly radiation cloud from the disaster.

But Ukrainians are strong in will and spirit. They are some of the most adaptable to challenges that I have seen, having continued to be put through trials that show their resilience and desire to survive—from Stalin starving 10 million Ukrainians to death in the Terror-Famine of 1932 to the Revolution of Dignity, which took place in Maidan in the heart of Kyiv in 2014. This revolution pitted everyday Ukrainians—men, women, and children—against Putin-supported President Viktor Yanukovych. Before it was over, a hundred civilians in the city had been killed by Russian-trained snipers. But many argue that this revolution was what finally set the country on a path toward full Europe integration.

Since the revolution, Maiden has become the true heart of this sprawling capital city. It has been the major place for the citizens to hang out during the three COVID quarantines the city has imposed during the pandemic. It is a great place to find strength to weather the growing economic and emotional challenges caused by the seemingly never-ending pandemic.

While I want to believe COVID is in its waning days here, belief is no more a protection against COVID’s spread than hanging pieces of paper in your restaurant’s windows is. Eating my breakfast of eggs, potatoes, and the occasional vatrushka behind a thin piece of brown paper, I can temporarily forget the reality of the situation, but it’s reawakened when I hear another ambulance siren that is likely carrying a COVID patient to the hospital.

It’s a stark reminder of our obligation to the health and safety of each other. The best way to rid Kyiv—and the rest of Ukraine—from this deadly virus is to recognize the importance of keeping our fellow Kyiv residents safe by respecting the quarantines, the basics of wearing masks, social distancing, and washing our hands. But is it possible to get a place so divided culturally and politically that we no longer have shared realities to agree on this? Let’s hope!