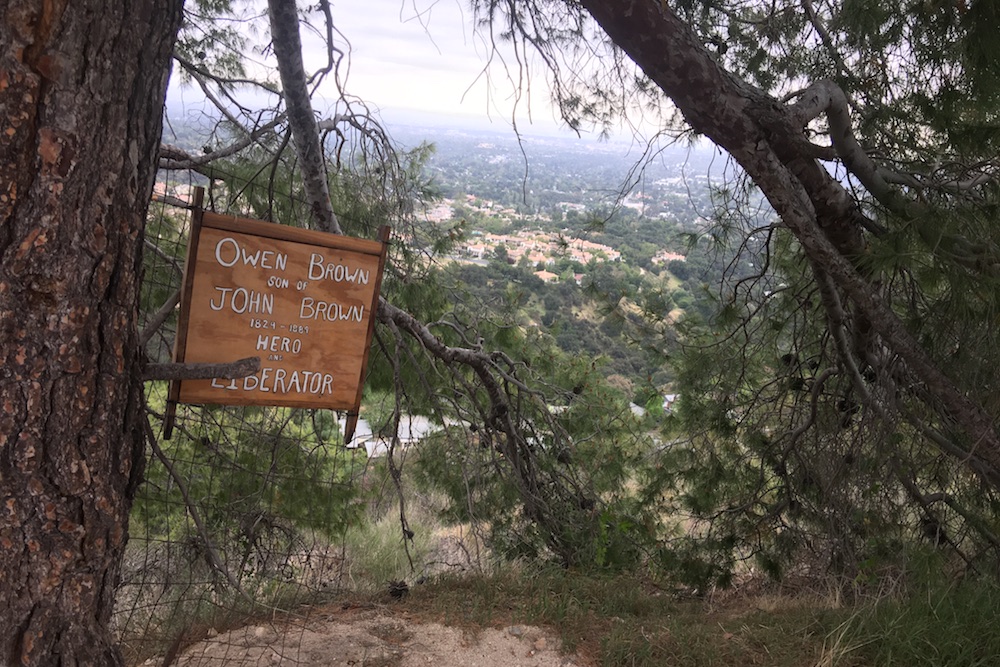 A small sign marks the site of Owen Brown's grave above Altadena. Photo by Laura Randall.

The unmarked trail that leads to the gravesite of abolitionist Owen Brown is flanked by wild fennel and sage. The place has a quiet stillness, befitting a man who devoted the last years of his life to peace and temperance.

The conflict surrounding the site, however, is anything but peaceful. For more than a decade, this unassuming hilltop property above Los Angeles—in the unincorporated community of Altadena—has been at the center of a controversy that touches on historical preservation, racial inequality, overdevelopment, and public access to private land.

The third son of abolitionist John Brown, Owen Brown was a member of the small band of men who famously raided the federal arsenal at Harpers Ferry, Virginia, in 1859 in a failed attempt to launch a slave revolt in the South. Owen, one of the few survivors of Harpers Ferry, spent the next two decades with a bounty on his head in New York and Ohio before escaping to the relative safety of Southern California, where his brother Jason and sister Ruth Brown Thompson had settled.

Owen and Jason Brown built a cabin in the foothills above Pasadena, and began carving a trail up a nearby mountain that they dedicated to their father and his anti-slavery cause. (They also joined Pasadena’s growing temperance movement, but that’s another story.) The views from the cabin were sublime, wrote a Chicago reporter who visited in 1893, “commanding a view of the valley below for 60 miles, the sea and even islands of the sea.” A photo on file at the Pasadena Museum of History shows the two brothers receiving visitors outside their simple wood structure, with chaparral-dotted hills in the background.

Owen died of pneumonia before the Brown Mountain trail was finished. He was buried near the cabin on Little Round Top, a hilltop named after the Gettysburg battle site. About 2,000 people attended the funeral, remarkable for the era, and funds were raised for an engraved headstone that read: “Owen Brown son of John Brown The Liberator, Died Jan. 9, 1889, Aged 64 Yrs.”

For more than a century, the gravestone and its million-dollar views remained relatively unmolested and accessible to anyone willing to hike up to it.

That all changed in the early 2000s, when the private property on which the gravesite sits changed ownership. No trespassing signs and other barriers appeared, blocking public access to a fire road that leads to the grave. A local trails group filed a formal complaint that accused the owner of unjustly preventing hikers and history buffs from using the trail. County officials inspected the property and found numerous land-use violations, including a rusted-out car and other debris, all of which the owner was directed to remove.

For more than a decade, this unassuming hilltop property above Los Angeles—in the unincorporated community of Altadena—has been at the center of a controversy that touches on historical preservation, racial inequality, overdevelopment, and public access to private land.

In the middle of all of this, Owen’s gravestone disappeared, although not for the first time. Vandals reportedly rolled it down the hillside in the 1970s, at which time a local resident returned it to Little Round Top and set it in concrete in an attempt to make it less vulnerable, which worked until the 2002 disappearance.

As the gravestone has come and gone, the views from its location at the edge of the Angeles National Forest have changed, too. You can still see Catalina Island on a clear day, same as the Brown brothers, but now you also can take in two wildly different Altadena communities.

One is a 1950s-era development of approximately 250 modest homes known as the Altadena Meadows. Exempted from the redlining policies that prevented African Americans from acquiring property in California in the mid-20th century, the Meadows became a Black middle-class neighborhood. Charles White, a Chicago-born artist known for prints and murals that highlighted Black struggles and triumphs, lived here with his family. A Charles White portrait of John Brown hangs in the Metropolitan Museum of Art in New York City. Brown was one of only two white men featured in the artist’s oeuvre; the other was Abraham Lincoln. Coincidentally, White’s son, Ian, was out hiking with his own son in 2012 and spotted Brown’s missing gravestone in a ravine; it took three men and a dolly to dislodge it.

Just across Millard Canyon and clearly visible from the gravesite is La Viña, a gated luxury housing development once occupied by a tuberculosis sanitarium that was destroyed by wildfire in 1935. La Viña’s 272 homes were built by a Pasadena developer in the late 1990s amid fierce opposition over the high-density project’s impact on the environment and restriction of trail access. Its five-bedroom, Spanish-tiled homes and security guards stand out in west Altadena, where horses and chicken coops are typical sights, and the neighborhood prides itself on a laid-back, independent vibe.

Yet the uncertain future of Owen Brown’s grave may have an unlikely savior in La Viña. In 2018, its developer, Cantwell-Anderson, bought the six-acre property on which the gravesite sits at auction and is in the process of deeding it back to a local land conservancy along with funding trail improvements. In exchange, the Altadena Town Council spent more than two years working to reach a consensus with the developer on a plan that was approved by the Los Angeles County Board of Supervisors to authorize La Viña II, which would build out an additional 18 single-home lots within the developer’s gates.

Preservationists say the developer’s efforts are sincere; the land conservancy hopes to create a protected landmark to educate the community on its local connections to the Civil War. The Pasadena area became a refuge for Union soldiers after the war, and freed slaves mingled with whites there on a regular basis. The Browns, including Ruth and Jason, who also promoted and championed their father’s anti-slavery fight, have a rightful place in this story.

Others argue that the developer’s gesture will never make up for the walled officiousness of La Viña—or the impact (or lack thereof) of a cluster of new, expensive single-family homes on the region’s housing shortage. Many residents of the Meadows, already weary of the onslaught of new hikers that poured into their ungated neighborhood during the pandemic, fear that drawing attention to the Brown gravesite will only attract more traffic to the area.

The gravestone itself remains in hiding to protect it from vandals; a fiberglass replica sits in a park a few miles away. For now, a rudimentary wooden sign marks the clearing where the Brown cabin once sat. Several hawks circle above, and the occasional mountain biker can be spotted pedaling south along El Prieto Canyon Trail. Modern sounds intrude—the hum of cars on the 210 Freeway, construction noise from a new house going up on Rising Hill Road. Even if Owen Brown continues to stir the pot from this place, a remote peacefulness pervades, a feeling that one is standing in a special place that connects Los Angeles to the rest of the country.

Editor’s note, This essay has been updated to clarify that the Altadena Town Council needed the approval of the Los Angeles County Board of Supervisors to amend the La Viña plan.