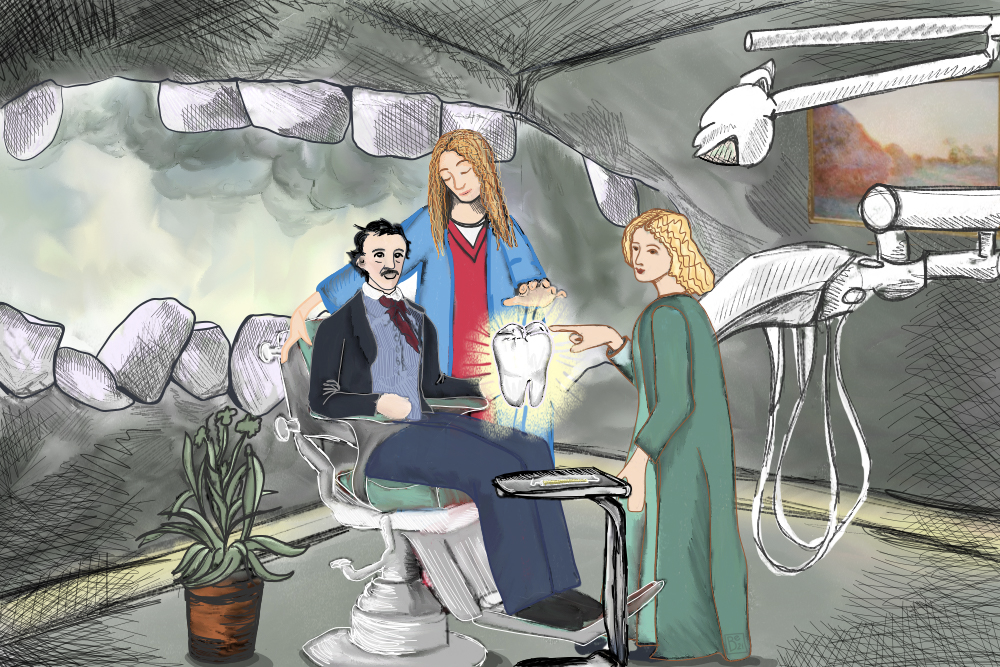 I have many flaws. I delight in judging my neighbors. I step over the shower drain jammed with a whirlpool of my hair. I read the comments section. I leave lights on. My wife once caught me picking my toenails within full view of my son. These shortcomings, however, seem mild when placed alongside the one I offer you today: I’ve been an annoyance to all seven of my dentists. My method of choice: poorly timed lectures on poems, novels, and stories about teeth.

Did you know there’s a rich and under-loved canon of periodontic literature? I’ve read a fair amount of it. Did you know that most dentists have not read this work? I’ve checked. None, in my admittedly unscientific survey, know of Solyman Brown’s Dentologia, an early-19th-century verse treatise on oral ailments and treatments. Nor have they pondered Elizabeth Bishop’s “In the Waiting Room,” a purgatorial, poetic meditation on old magazines. Scottish bard Robert Burns’s “Address to the Toothache”? Shadows lengthen on the ceiling. Zadie Smith’s debut novel White Teeth? Polite nods.

In the wind-up to any cleaning—recliner, bib, chit-chat, shame—I namedrop one of these titles. I poke and prod, test and touch, searching for the tenderness of recognition, a common ground on which my dentist and I might meet. None comes. If this sounds haughty or performative, needy or grasping, well, you’ve got me pegged. I am, in my mind’s eye, a salon host, bon vivant, and elbow-patched prof. (One of these roles is actually mine.) I don’t notice when the conversation grows one-sided or is replaced by the whir of tiny machines. Out come the sickle scaler and tartar remover, the Heidemann spatula and the explorer probe. The light tilts toward me. I open wide.

Perhaps, dear Reader, you’re looking forward to your first post-COVID check-up. Perhaps you’ve already experienced the check-up’s duel between tool and tooth, scraping and speaking. Perhaps it was a welcome return to a post-plague world. If so, I salute you. You’ve a healthy relationship with a person who keeps you healthy. You don’t read a request to stop speaking as a personal affront. I, on the other hand, feel weirdly compelled to assert my literary self-worth when someone sticks a sucking wand in my mouth. I’ll rattle off lines of poetry until, of course, I can’t. This makes me want to talk more.

I want to expound, for instance, on Frank Norris’s McTeague, an 1899 novel which, according to the critic Alfred Kazin, “could just as easily have been called ‘Teeth.’” It’s got a great protagonist, the titular McTeague, and plot twists and violence. McTeague is a dentist, and a brutish man who—having etherized a young woman he’s treating for a cavity—“kisse[s] her, grossly, full on the mouth.” When she comes to, unaware of his sexual assault, he proposes marriage. She refuses, “shrinking down before him in the operating chair,” retreating from his “immense square-cut head.” He proposes again, looming closer. She then vomits, a “not unusual after effect,” our narrator reminds us, “of the ether.”

You should not, under any circumstances, discuss this novel with your dentist. But the moment I read it, I wanted to go in for a cleaning. I wanted to recount this episode in lurid detail before opining on the role of orality and appetite in the novel. (In a later scene, McTeague and his frenemy, Marcus, stick billiard balls in their mouths; McTeague almost chokes.) I wanted to ask about 19th-century dental rivalries and analyze the tooth sign, “a gigantic fossil, golden and dazzling,” that hangs over McTeague’s practice, the envy of his peers. (In San Francisco, where the novel is set, McTeague’s Saloon boasts a replica tooth in homage.)

McTeague’s victim, Trina Sieppe, does eventually marry him, and it occurred to me—as the desire to speak recklessly often occurs to me—to ask my dentist if he’d ever married a patient? Dated one? Maybe imagined one, before a particularly tricky procedure, as I hear nervous actors do, unclothed? These were the discussion questions that would cap off my talk, an attempt—or so I told myself—to get my putative student, this dentist, to think about their place in the text. This, of course, is one of narrative’s joys: to imagine what you’d do if you were the protagonist. And who better than my dentist to empathize with the odious McTeague?

I’d like to note now, for the record, that I’ve never actually asked about my dentist’s sex life. Still, I’ve considered it, which begs the question: What’s my problem?

I’d like to note now, for the record, that I’ve never actually asked about my dentist’s sex life. Still, I’ve considered it, which begs the question: What’s my problem? One possible answer: A dentist’s chair inhibits my impulse control. I give over, like McTeague, to the “sudden panther leap of the animal.” At a cleaning, I’m wild, mildly monstrous, and/or the pissant I surely was as a kid. And don’t all dentists, if we’re honest, turn their patients back into kids? Dentists play Santa with that miniature toothpaste and toothbrush; they ask, during the polish, if we want bubblegum or mint. They mean for us to respect them, but mostly we just bear them, and their lordly opinions about floss.

Here’s one name for my malediction: “The Imp of the Perverse.” This was Edgar Allan Poe’s term for doing exactly what you should not do at the exact moment you shouldn’t do it. But you do it anyway because some urge or itch tells you that the act will feel good. Teeth, at least for Poe, played an oversized role in provoking the imp. In Poe’s lackluster 1835 story “Berenice,” the narrator “struggle[s] in vain against [the] strange and irresistible influence” of his beloved’s teeth. When that beloved dies—as all of Poe’s beloveds do—a small box drops through a plot hole and onto the narrator’s desk. There he finds dental tools “intermingled with thirty-two small, white and ivory-looking substances.” The narrator, in some bookish fugue state, extracted them, one by one, from his beloved before she died.

Here’s another explanation for my behavior: old-fashioned revenge. “Nothing locks me into a pathological cycle of guilt, shame, and failure,” a whip-smart friend of mine once tweeted, “quite like the dentist.” I concur. The analyst asks us literary loners to recline, but lets us talk. The medical doctor often plies our own trade; Chekhov, William Carlos Williams, and Oliver Sacks were all M.D.s. The dentist’s office, however, is part interrogation cell (silhouetted faces, personal questions) and part torture chamber (hooks, fluids, moans). Blinded by a halogen light, I think of the other painful but necessary tasks that might’ve filled my time: a colonoscopy, a tutorial on tax law.

And isn’t psychological scarring my purview—as poet? as professor? Aren’t I supposed to render my subjects speechless, wheedled into reviewing their otherwise unexamined life? This is one more reason for me to maintain my petty dental grudge: professional jealousy. The mouth isn’t just a “secure kingdom,” as Nabokov writes in Pnin, that the dentist assails. A tongue is more than “a fat sleek seal [that can] flop and slide so happily among the familiar rocks” (also Pnin). It’s the source for all speech, all writing—and teeth are its pearly portcullis, keeping those treasures intact. It’s the place where the bond between author and reader begins.

Poetry, as I’ve written elsewhere, is a transhistorical union based on our unchanging anatomical forms. When we read poems, even silently, we move our lips, tongue, and teeth, replicating movements first made in the mouth of our authors. (It’s true.) “It is you talking just as much as myself,” Walt Whitman writes in “Song of Myself”—“I act as the tongue of you.” You’re probably doing it now too, just a little, as your eyes pass down the screen. (I am the tongue of you.) This is what makes literature so embodied, so erotic. All reading is two bodies moving—mouths first!—in sync.

Dentists, though, sanitize our mouths. They’re the oral street sweepers, the inadvertent voiders, of all our bibliophilic romps. They can’t help it, of course; that’s their job, and for doing it well, I’ve chosen to punish them in the mode I know best: as a pedant. “Have you read Valeria Luiselli’s The Story of My Teeth? I hear it’s exquisite,” I can hear myself asking during my next check-up. “Did you know that dentists and poets both have high suicide rates?” I’ll muse. “I get why we’re depressed. Why are you?” These are questions meant to both bond us and break us, to reassert our similarity, and to remind them, with small-minded snubs, that we’re not remotely alike.

Which brings me, once more, to literature. I think of classic tales of sons who rebel against fathers. I think of Harold Bloom’s theory, the anxiety of influence, wherein poets must overcome their poetic influences and ersatz dads. Can such anxiety leap between two mutually oral professions? Why have all my dentists been men?

Next month, when I return for a cleaning—my first since last July, when a flurry of guilt-inducing emails met a lull in community spread—this is what I’ll be thinking about. Then I’ll tell my dentist that Pushkin loved Byron’s shiny white teeth. The visit will end much like it began, reminding me, once more, of reading. There’s a piece of paper spread out between us. A short time has passed, and we’ve spent it together. He tears the paper away—a mere bib now, rumpled and blood-stained—and then disappears.