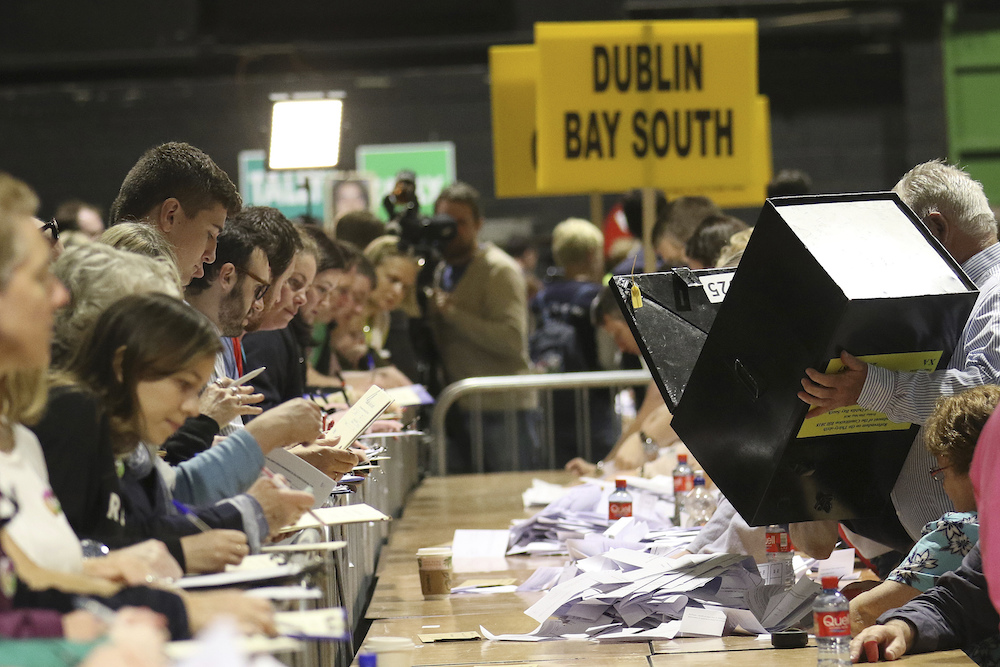 “When you take responsibility away from people you make them irresponsible,” proclaimed English politician Sir Keith Joseph almost half a century ago.

Sir Keith might not be a household name outside his native Britain. But his apt phrase neatly justifies how much societies around the world today need more democracy—and more citizen engagement.

When democracies limit citizen participation to voting for political parties, we can blame our misfortunes on the politicians. Under such circumstances, we easily fall prey to demagogues who promise the earth, but who merely are in it for themselves. What we need is a system of “responsible” government, and this means that we have to take responsibility ourselves.

Direct democracy offers a number of ways to make us more responsible. First, there is the citizens’ initiative, a practice in democracies including Taiwan, New Zealand, Switzerland, and Uruguay. In Uruguay, if 25 percent of the electorate propose a piece of legislation (by signing a petition), the entire electorate must vote on it in referendum.

In 1994, Uruguayan citizens gathered enough signatures for a popular vote on whether to protect old-age pensions. A majority supported the proposition; it seemed a balanced choice and one that the country could afford. In making this choice, a majority of the citizens of Uruguay opted for social justice, and as they had in a 1992 vote on a plan for privatization, defied the neoliberal political establishment.

So was there a liberal bias? Did Uruguayan voters default to supporting policies of the left? Not uniformly. Indeed, in the same year, when the nation’s teachers’ union sought to guarantee the allocation of 27 percent of the state budget to education, the vast majority voted “no.” Not, it should be said, because the voters were opposed to good education. Rather, the voters rejected the measure because the proposition was too blunt and lacked nuance. Also, on balance, setting a fixed percentage was not a prudent way to budget. The debate over the education measure became a practical exercise in responsibility. The citizens weighed the alternatives and decided after careful deliberation.

What is interesting about the Uruguayan example is that both votes were initiated by the people. In this way, it is different than the top-down referendums in many countries. Unlike California, for example, countries like Switzerland, Italy, and Uruguay do not allowed paid petition gatherers. Hence, the initiative process is truly bottom-up and less likely to be captured by those with the deepest pockets.

Too often, politicians hold referendums when they themselves are in a tight spot. As the economist John Matsusaka has written, governments often rely on referendums for issues that are “too hot to handle.” In the late 1990s, British Prime Minister Tony Blair held a referendum on a parliament for Scotland in order not to alienate voters in England, and in 2005, the French government submitted the European Constitution to voters for fear of upsetting the large segment of French voters who were skeptical of the EU.

This process of elected politicians submitting unpopular questions to voters is not direct democracy. It is an abuse thereof. And it is entirely out of step with the current moment and how people want to engage with the world. By contrast, over the past three decades, some local and national governments have taken a much more proactive approach to citizen engagement through participatory budgeting.

Now that citizens had to make recommendations themselves, people’s stances became more nuanced, and they became more open to a plurality of arguments.

The idea is simple: the government distributes a percentage (typically 10 percent) of the local budget to the citizens, who decide what to spend the money on. “How would you spend one million of the City’s money?” asked a pamphlet distributed to New Yorkers in 2011 that introduced them to the process.

Participatory budgeting came to Tower Hamlets, one of the most unequal parts of London, in 2009 and 2010 in a project designed to help the area choose new social service providers. The borough was divided into eight smaller areas; in each, a representative section of community volunteers could question the providers on whatever they wished, including social responsibility and commitment to the community. Eventually, the citizens were able to negotiate with providers on the details of how service would work.

Finally, after this process, a vote was taken on which providers offered the best value and which were most likely to provide employment to local residents. This participatory project was a success. An evaluation by the local government association concluded that “a majority of participants said they had developed skills linked to empowerment, and the community overall felt they could better influence their local environment and services.” It was popular, too. More than 77 percent wanted the council to repeat the event in the future.” This level of engagement was considerably above the average for similar boroughs, where as few as 20 percent of residents even bother to vote.

The Tower Hamlets experiment—as well as participatory budgeting in places as different as Porto Alegre, Brazil and Paris, France—shows that citizens behave responsibly when they are given responsibility.

The money allocated in participatory budgeting is finite, and those involved in the process know that they have to make hard choices. Admittedly “trust” is a difficult concept to measure, but research by the World Bank suggests that citizen engagement grows trust in the political system. Moreover, citizens learn democracy by doing it. As Harvard political scientist Jane Mansbridge wrote, “Participating in democratic decisions makes many participants better citizens.”

Given the opportunity to make choices—and difficult ones at that—everyday people learn that politics is not a simple business. This realization lessens the allure of those who erroneously claim to offer simple solutions. The proof, as always, is in the pudding of facts. What is interesting is that populist parties have been less successful in countries that have experimented with deliberative mechanisms. Thus, in Ireland, there is no far-right populist party. The same is true for Brazil, where reports on participatory budgeting in Porto Alegre suggest that citizens who engaged in the process become more interested in the policy issues and less concerned about the tribal politics.

This realization is also a defense against those who would use plebiscites, ballot measures, or other campaigns to threaten minorities or immigrants. Stronger citizen decision-making, if well designed, can de-escalate divisive issues, and also keep debate civil and respectful.

Ireland offers one example of direct democracy protecting human rights. For decades, the European island nation was a conservative bastion that outlawed abortion and even limited the right to divorce. Politics was often polarized as right-wing parties competed to be more conservative than each other.

This changed when, in 2012, the government accepted the use of citizens’ juries (or citizens’ assemblies), in which everyday people gather, study an issue, and make a recommendation to parliament as to how to proceed. Soon, Irish politicians, seeking to end division, agreed that such groups of ordinary citizens would handle any proposed legislation on same-sex marriage and abortion.

The citizens’ assembly on abortion met in 2016. Because making sound decisions is about information, and weighing the pros and cons, the group got the same access to expert briefings as elected officials, and to suggestions submitted by other Irish citizens. The organizers of the citizens’ assemblies also invited advocacy groups ranging from the Catholic Church to LGBTQ+ organizations to offer input.

After deliberating, the citizens’ assembly proposed allowing abortion in the first nine weeks of pregnancy. This fell well short of what various feminist groups wanted but was also far more liberal than the existing prohibition, which made it a criminal offense to travel abroad to terminate a pregnancy. This compromise position was endorsed by just over 60 percent of the assembly, and subsequently ratified in a referendum by a similar majority of Irish voters.

The use of the citizens’ assembly was welcomed by both sides of the argument. Even senior Church clerics expressed support for the process of deliberative listening. “Concepts, in and of themselves, rarely move people emotionally. Relationships and stories, however, do move people,” Church of Ireland Archbishop of Dublin Michael Jackson said in a statement, noting that the referendum was decided after “the telling of and the listening to stories ‘on both sides.’” Independent evaluations of the citizens’ juries concluded that participants took their duties seriously and used their powers responsibly. Participants told evaluators and the press that they themselves had to live with the consequences of their actions.

Previously, Irish voters could blame politicians for their unhappiness with social policy—even if they had voted for the officials. Now that citizens had to make recommendations themselves, people’s stances became more nuanced, and they became more open to a plurality of arguments.

Society needs shifts like this now more than ever, both to escape our polarized politics and to capitalize on the way we live today. Just as out-of-print books can be printed “on-demand” if customers wish, democracy should be upgraded to reflect the wishes of the voters. In the age of Netflix and Spotify, people demand the ability to select individual playlists and policies. We are no longer content with the package deals offered by political parties. Majorities in all democratic countries want more decision-making power and deserve democracy on demand.

Almost 200 years ago, Alexis de Tocqueville concluded, “the most potent, and possibly the only remaining weapon to involve men in the destiny of their country is to make them share in its government.” Apart from upgrading the antiquated gendered language, this conclusion still holds true.