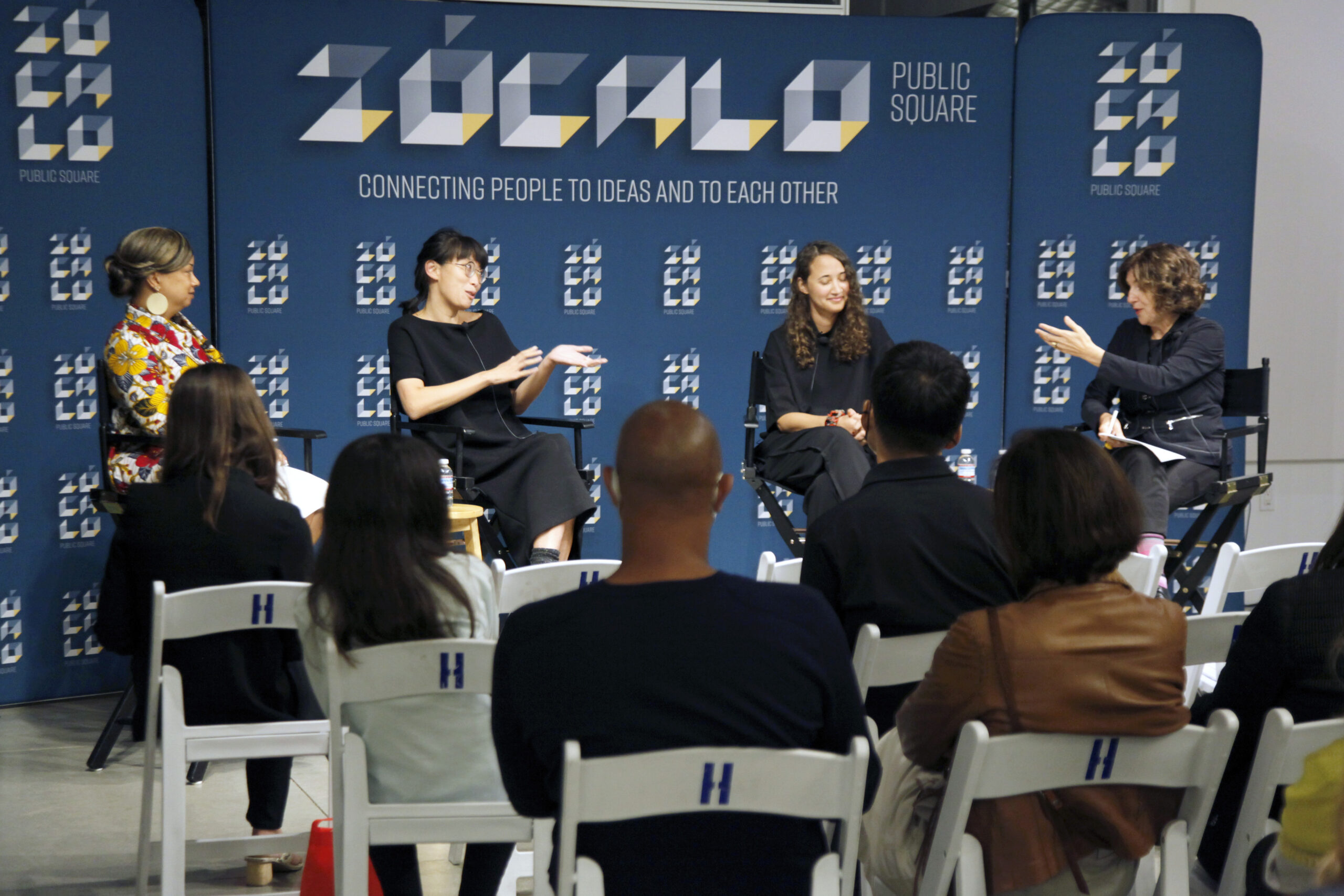 The cultural scene of Los Angeles is in the process of redrawing itself—in the last month alone, two institutions have announced their first female executive directors, Johanna Burton at the Museum of Contemporary Art and Alexandra Rasic at the historic Gamble House in Pasadena.

“It’s a very, very exciting time,” said journalist Frances Anderton, setting the scene for a rousing conversation she was moderating at the Helms Bakery District in Culver City. Many of the changes at hand are long brewing, but the pandemic has shifted the landscape the city’s culture sits on. For Zócalo, this means, among other things, producing our second hybrid event, expanding our audience to both in-person and virtual for last night’s Zócalo/Helms Bakery District panel, “Will a New Generation of Leaders Shake Up L.A.’s Culture?”

Panelist Shelby Williams-González, who recently became president and CEO of Inner-City Arts—an arts education program based in downtown L.A.—had suggested the idea for such a conversation. Why, Anderton asked her, is it important to discuss this changing of the guard while it’s happening?

“Not to have cultural amnesia,” said Williams-González, noting that change, after all, is cyclical—but she sees a real shift in the city taking place in this moment. “I think if we talk about it, even our institutions can do things together in this time of change. Let’s embrace it.”

Williams-González was joined on the panel by her longtime friend Cameron Shaw, executive director of the California African American Museum, as well as MAK Center for Art and Architecture director Jia Yi Gu. Both Gu and Shaw assumed their positions in early 2021.

You’re all highly innovative people with big visions, said Anderton. At the same time, you face the same pressures as your predecessors when it comes to raising money, selling tickets, attracting an audience, and staying relevant. How, she asked the panelists, do you see yourselves as being a change for your institutions?

“I think if we talk about it, even our institutions can do things together in this time of change. Let’s embrace it.”

Aside from identifying as a woman, and a woman of color (“that’s new” and “very new” for Inner-City Arts), Williams-González is both a teaching artist and an artist herself. “I’m really bringing that lens into this work,” she said. “The reason we exist is to provide arts programming to young folks, and to provide a space for artists to thrive.”

One of Shaw’s goals is to model a public-private partnership to accomplish some bigger ideas—whether that’s funding “more ambitious and experimental” projects by artists or even a remodel and expansion of CAAM’s 1984 building. “We need to bring our building into the future, while honoring the Black architects and the history of the building,” said Shaw.

“I see the charge in my role, and with our staff, to be as visionary in 2021 as [the museum’s founders] were in 1977 to think that this should be the first museum of arts, history, and culture devoted to African Americans that’s also supported by a state,” she continued.

Change naturally folds into the mandate of the experimental, multidisciplinary MAK as well, said Gu. The landmark Schindler House, where MAK is headquartered, was designed as a two-family cooperative living home by Austrian American architect Rudolph M. Schindler. “The whole enterprise,” she said, “was a socialist, avant-garde experimental artists’ community, so a lot of our work is to make sure that there is this value system around collectivity, experimentation, and a kind of rethinking of living.”

Thanks in part to the pandemic, the panelists are also thinking more globally about their audiences and constituencies. MAK has historically been bilateral—with headquarters in Austria and Los Angeles—but Gu is considering expanding to places like Mexico. “We are deeply embedded in a much larger global chain of engagement,” she said. “So I would be very interested in thinking, if there’s two poles, Vienna and Los Angeles, what happens when you insert the third pole?” 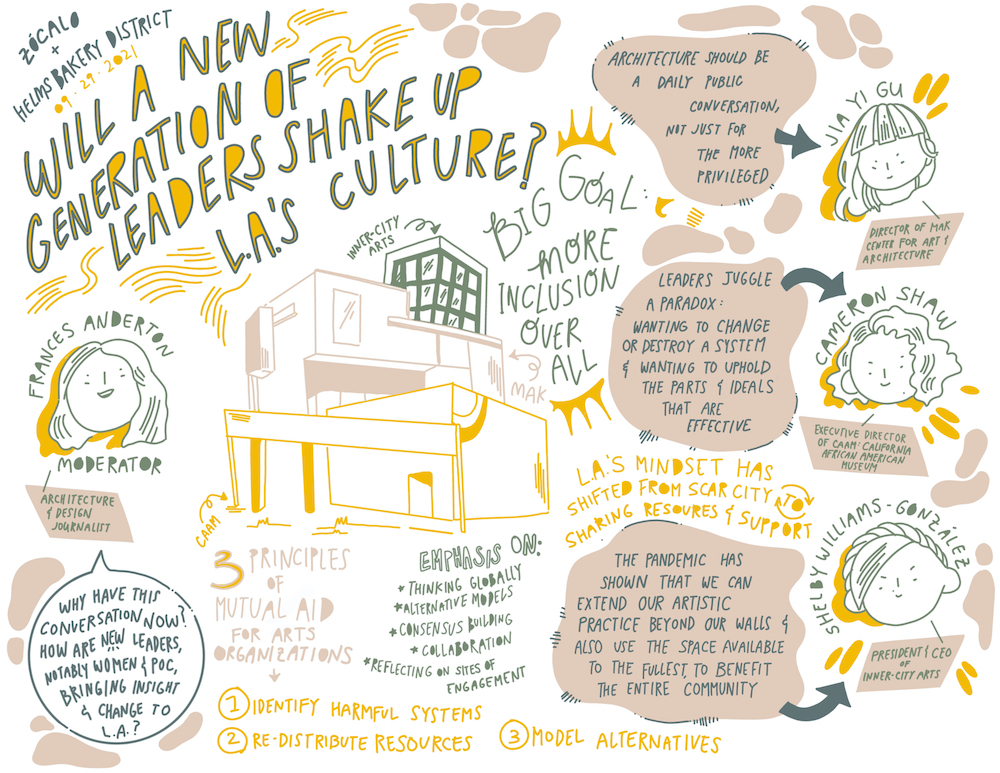 At Inner-City Arts, where the pandemic created virtual and hybrid programming models, it’s also inspired Williams-González to think about partnerships with students and teachers in other countries. “We want to share our best practices within the education field as well, not just for arts teachers but for classroom teachers,” she said. When it comes to Inner-City Arts’ downtown campus, that, too, could be used more consciously as space to serve the community, which is why she said she’s been in conversation with city council to see if they can set up a polling site there.

Switching gears, Anderton asked whether the panelists have come up against walls in their new positions: “Have any of you got something that you want to do with your institution that you’re butting heads with your board about, or your donors about?”

Williams-González said she and her board are discussing something very basic but important: the name of the organization in 2021.

“I completely acknowledge that when we were named, when it was about location, that was a word that was used, but it’s such a loaded word. It’s a coded word,” she said of “Inner-City.”

“Racism is racism, systemic racism is racism, you can call it what you want when you want,” she continued, but “we all find these different codes to talk about things politely so we don’t hurt people’s feelings.” She also wants a name that explains what the organization is. “If you said ‘Inner-City Arts’ and you’re not in the L.A. art scene, you wouldn’t know what we do.”

For Gu, the question is more about the field of architecture itself.

“I am not working against a specific body or board or governance structure, or even a funding model; I’m working against a perception,” Gu said. “When you talk about modern architecture in Los Angeles, it comes with all kinds of baggage around class, access, property ownership, whiteness.” She wants to open architecture up into “something that everybody in Los Angeles can access.”

Shaw used the question to speak about how she, like many leaders in arts and cultural spaces, is navigating the complexities of “wanting to change a system, wanting to destroy a system, and also wanting to uphold it and keep the aspects of it that do work for people.” In her role at CAAM, that means “working toward a future that includes the liberation and healing of Black people”—while being state-funded, and acknowledging that that the state is “one of the perpetuators of systemic violence.”

The evening also included lighter notes. When asked by Anderton if it’s lonely at the top, Williams-González quickly responded, “Yes.” Then, to audience laughter, she added, “You guys can ask us how we’re doing. It’s rare that that happens.” On a more serious note, she said that institutions have become more generous with one another. When she started in the local nonprofit sector 22 years ago, the feeling was “we’ve got to hold on to what we have”—since then, Williams-González said, it’s shifted in L.A. from a culture of scarcity to one of sharing.

Before the night wrapped, the panelists had time to address audience questions from the live YouTube chatroom, including: How much longer do we continue to invest in what seems to be a non-functional framework of cultural equity?

“The people are what determine the values of the institution,” said Shaw. “So it’s not about changing institutions; it’s about thinking about the people that we empower within our institutions to be decision makers.” 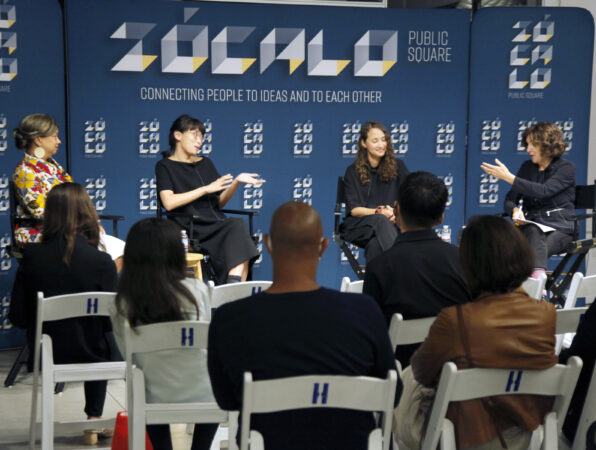 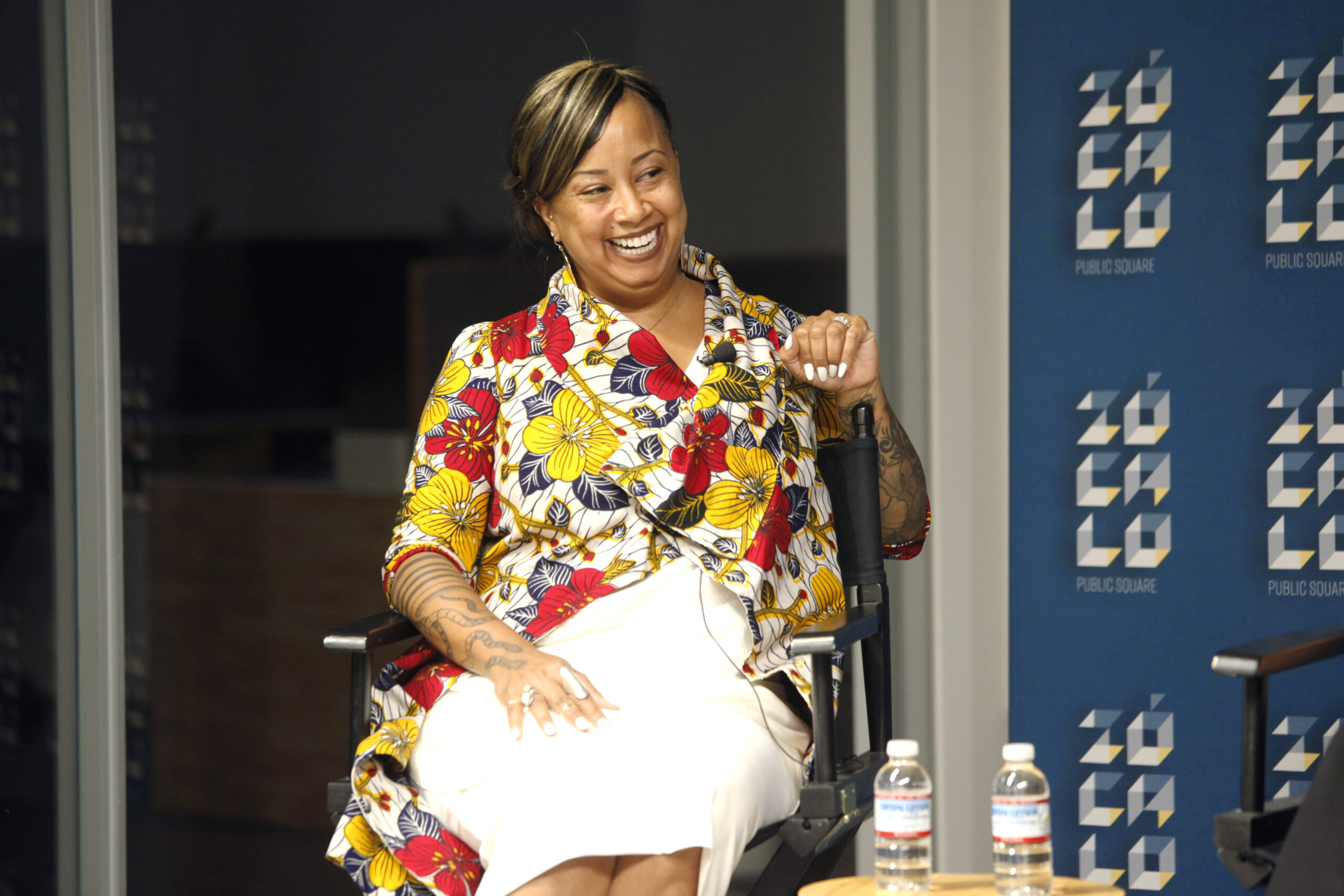 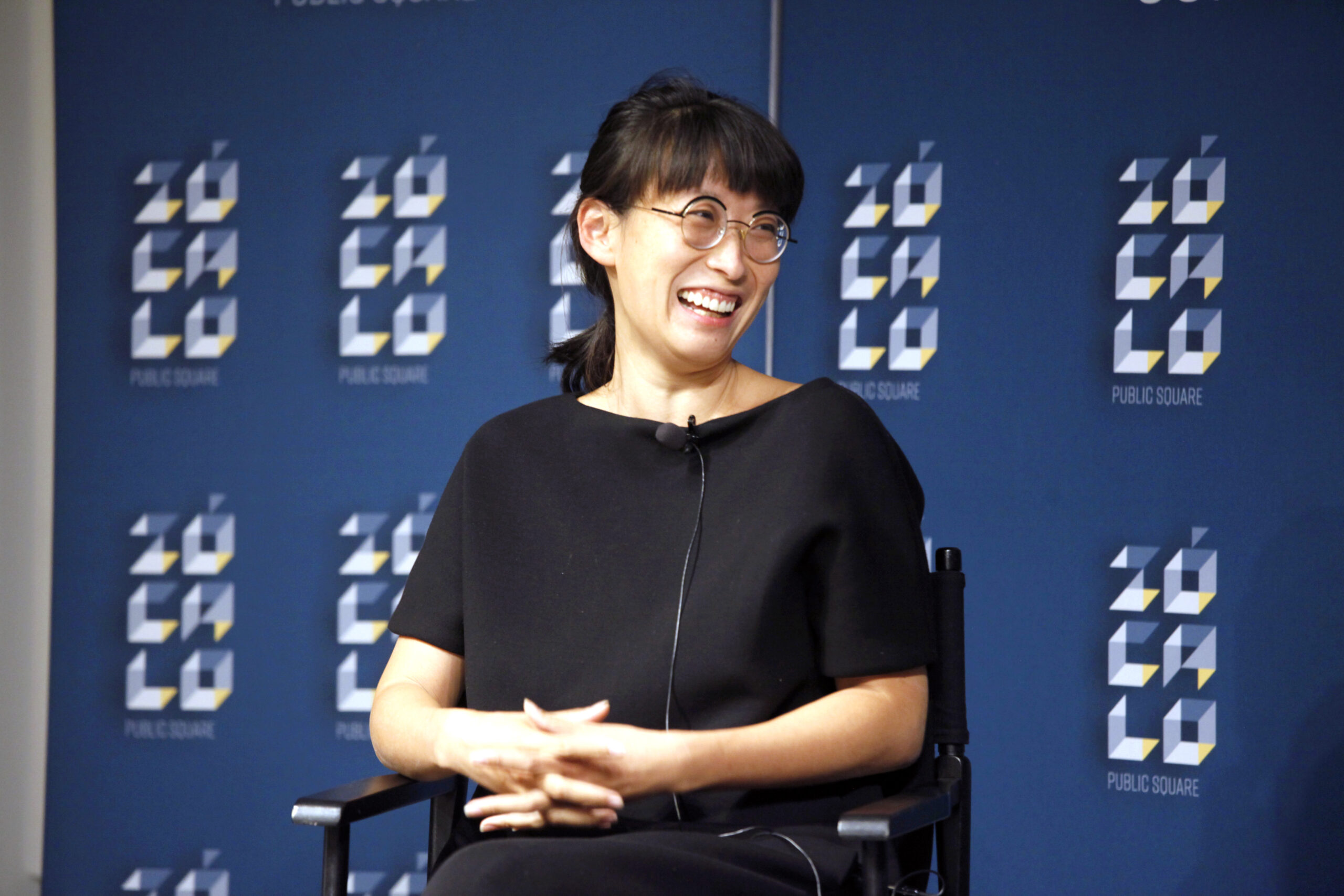 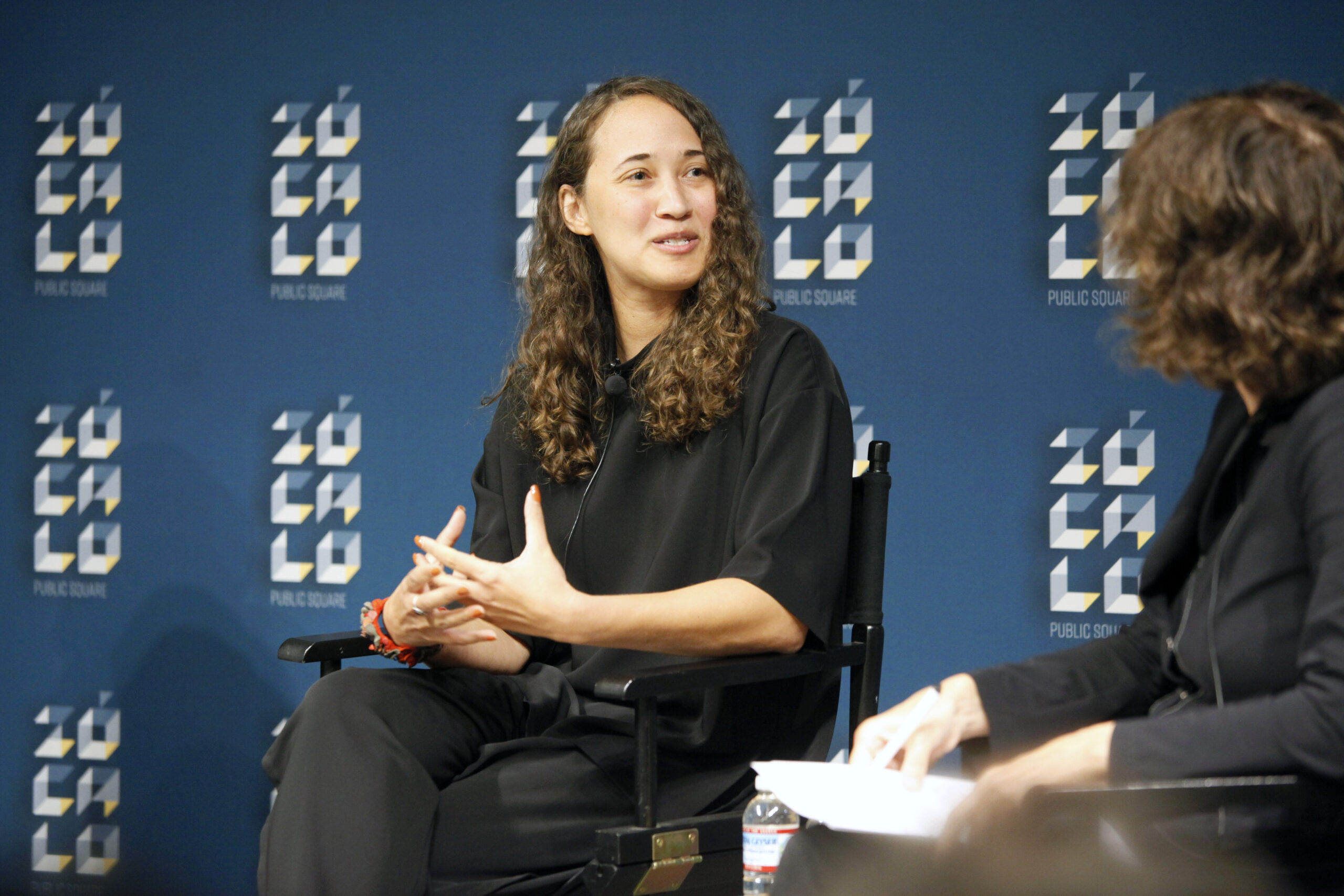 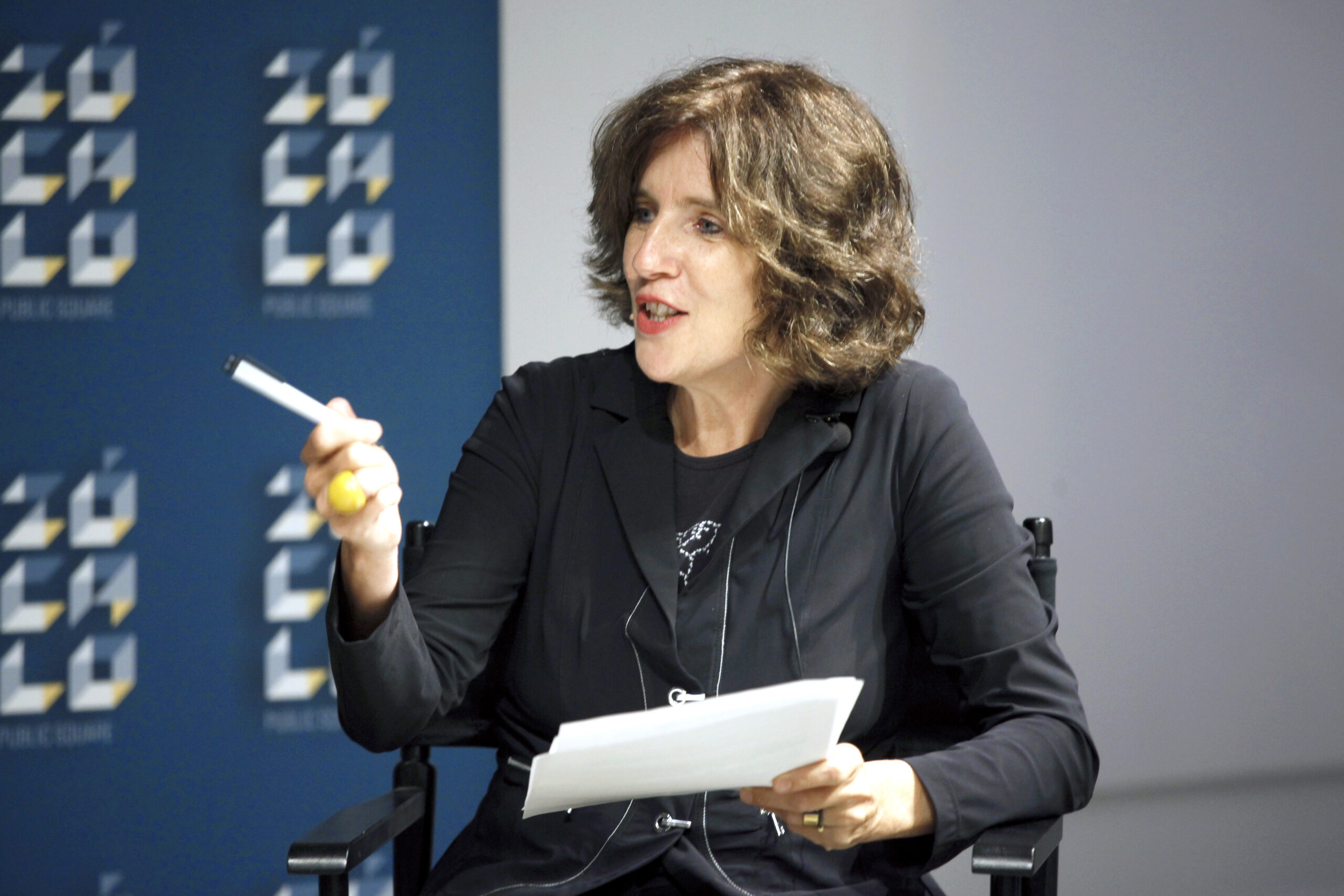 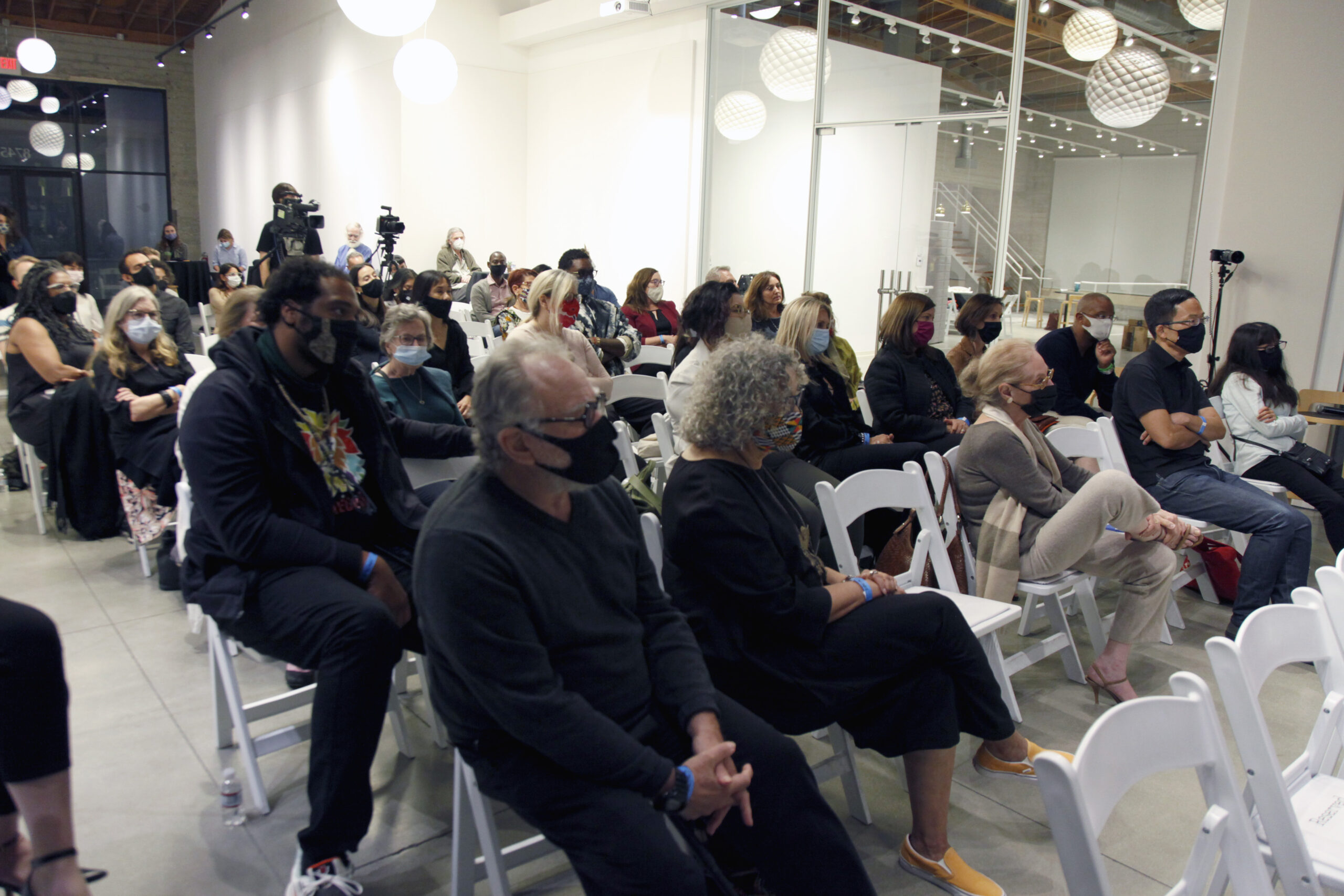 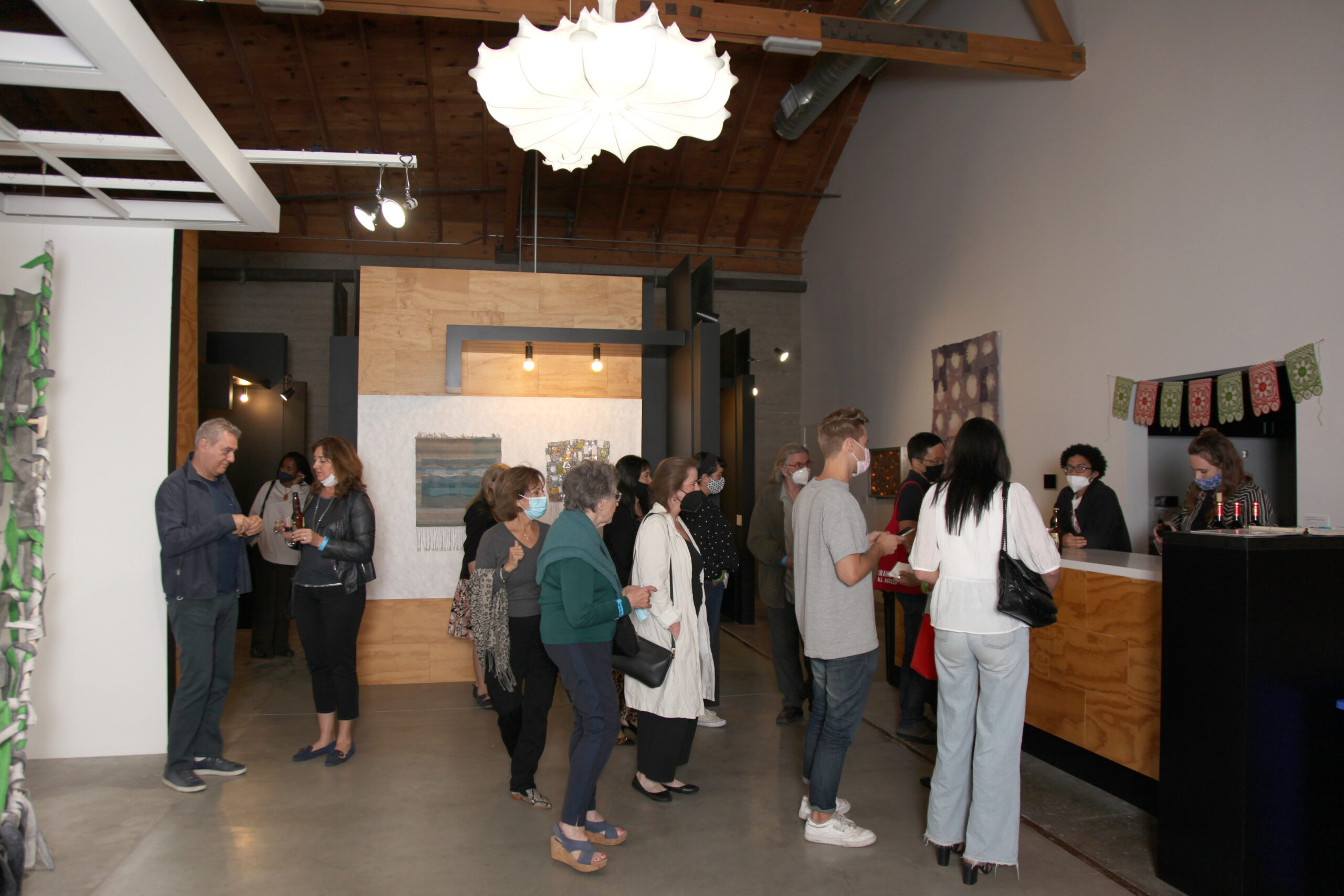 Guests mingle during the post-discussion reception Photo by Aaron Salcido. 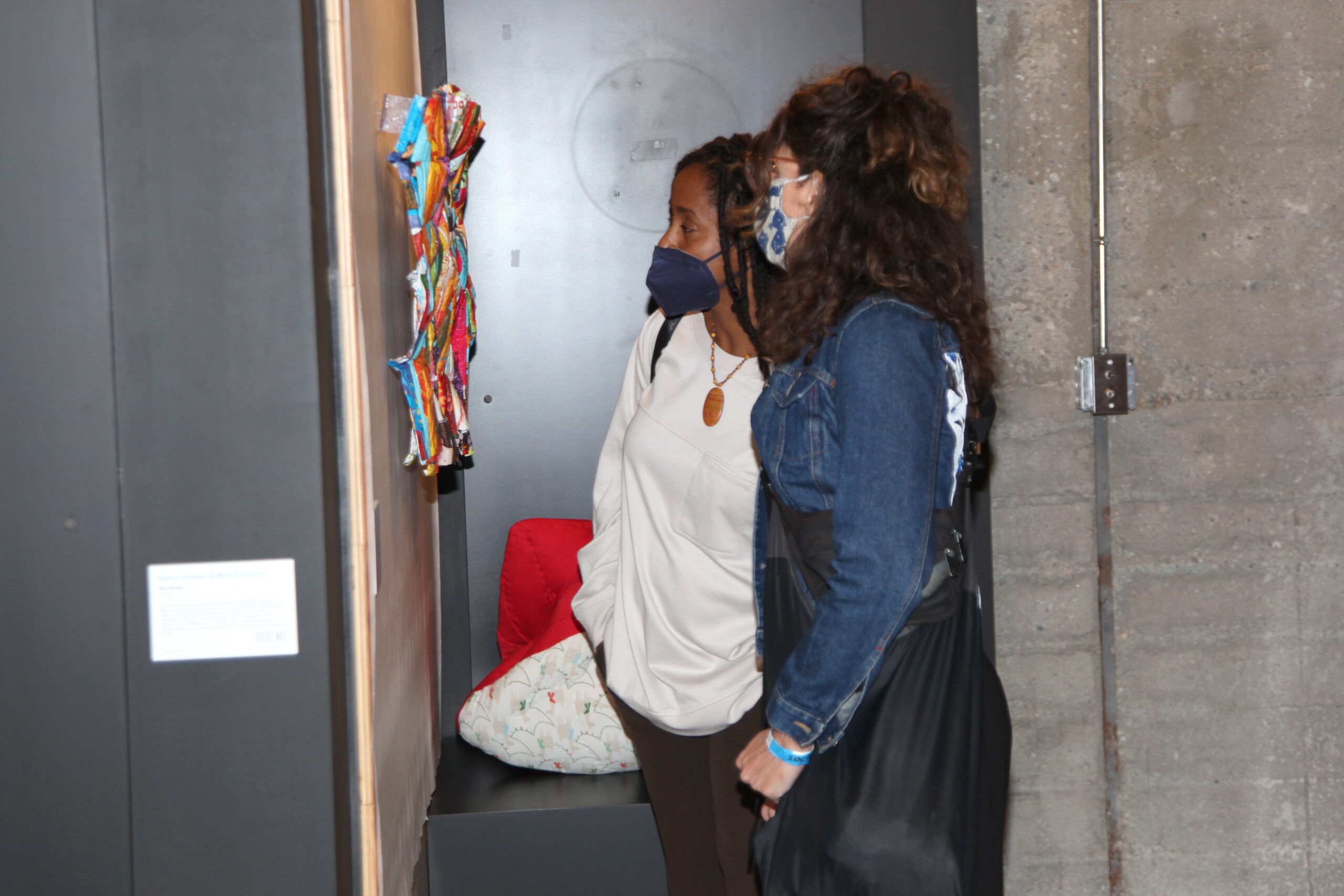