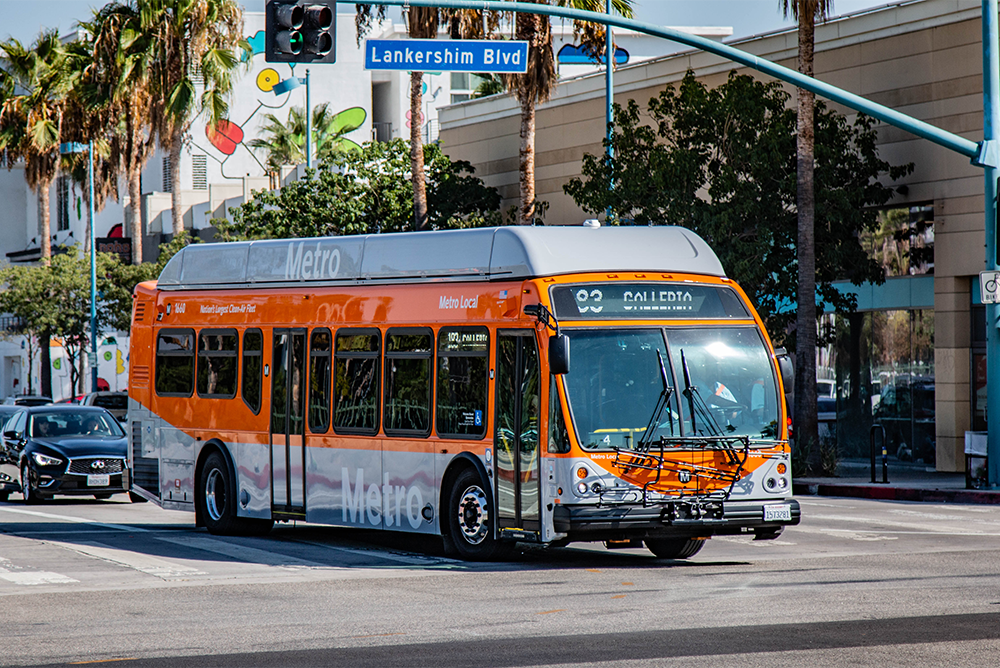 For the last century, Los Angeles has been expanding its road space far beyond almost any major metropolitan area in history. We have built freeways and roads and parking lots and parking garages. The size of this investment would have been more than enough to create a highly effective urban transportation system.

Instead, Los Angeles is known as a world capital of traffic, a place of extreme mobility challenges and a pollution-choked smog-burger. Low-income communities bear much of the burden of our failures—in worse access to jobs and opportunities, more severe health impacts from pollution and long commutes, and higher rates of injuries and collisions in transportation-related accidents.

And despite strong recent efforts, including unprecedented amounts of investment in rail and other transit infrastructure, things are poised to get worse. Vehicle purchases are on the rise, continuing a pre-pandemic trend. Despite more telecommuting, traffic is back with a vengeance and transit ridership remains depressed.

How did we get here? Because over the course of our history we have chosen to provide the benefits of that massive public investment in transportation almost exclusively to private vehicles, and at almost zero cost to drivers. Those vehicles mostly carry only one person at a time, churn out dangerous pollutants, and are not available to a very large segment of the population who cannot drive, choose not to drive, or cannot afford to drive. We should not be surprised at the outcome.

Yes, buses, bicycles, and pedestrians can use roads—but buses must combat traffic while biking and walking are often dangerous. Every year in L.A. County, speeding cars strike and kill hundreds of people and injure thousands more.

These realities have been produced by the choices we made as a region, but it doesn’t have to be this way. Los Angeles has the infrastructure to support the greatest transportation system ever known. We are just completely misusing it.

Imagine a world where this fantastic infrastructure investment really works, for everyone. What if Angelenos—whether they choose to drive, walk, bike, take transit, or even stay home—could be free from traffic, pollution, and physical harm? It’s achievable if we change how we choose to use our road space.

This is what it is like to be a commuter in Los Angeles. Your roadway space is free, but because you need that space to get to work or school or wherever you have to be, you have no choice but to wait in line to use it.

To start, we can put exclusive bus lanes and protected bike lanes on our major thoroughfares. Then we can run more and faster bus service, expand our bike share programs, and perhaps even distribute bicycles to those who cannot afford them. We can ensure sidewalks on every street and curb cuts on every corner, plus bus shelters to protect waiting passengers from the sun. We can lower speed limits even more on city streets, enforce traffic laws, and create more pedestrian crosswalks that give people more time to cross.

Then we get to the hard part: We need to stop giving away roadway space for free.

Have you ever tried to get an ice cream cone at Ben and Jerry’s on free cone day? Have you noticed that there is always a line, so that even though the cone is free, you wind up paying with your time? If you don’t mind waiting in line, or if waiting in line is fun because you are with friends, it’s no big deal. But imagine you need that ice cream cone to survive, so you must wait in line for it every day.

This is what it is like to be a commuter in Los Angeles. Your roadway space is free, but because you need that space to get to work or school or wherever you have to be, you have no choice but to wait in line to use it. So, you listen to music, or books on tape, or call your mom as you sit in traffic. This is the life we have chosen for ourselves.

But what if our roads looked more like a Ben and Jerry’s the other 364 days of the year? What if we sold the product that is in high demand instead of giving it away for free? The result would be the same as with any other product—shorter lines (i.e., less traffic). The concept is known as congestion pricing and has been used for years in cities such as London, Stockholm, Milan, and Singapore. New York recently approved a similar concept.

Taken as a package, congestion pricing, in combination with improvements to our road network, would dramatically transform Los Angeles. Traffic would drop, pollution would drop, and the entire system would become far more equitable. The net cost of these changes would be zero, since congestion pricing revenues could likely pay for the improvements to biking, walking, and bus commuting—all of which cost much less than highway improvement and new rail projects.

So why do we insist on making every day free cone day?

Each of the above ideas faces serious obstacles. An exclusive bus lane or a new bike lane typically requires taking away a lane of existing traffic. The new lane could potentially move far more people far faster, and those people are likely to be predominantly low-income and minority. But drivers typically balk at giving up a lane—and take their concern directly to their elected officials.

Adding sidewalks, pedestrian crossings, and bus shelters might seem relatively non-controversial, but many neighborhoods resist these as well on the grounds that they might slow traffic or “change the character” of a neighborhood, and they are typically not a budget priority. Reducing speed limits and enforcing them is not only unpopular, but also challenging due to state laws and limited resources.

But the largest problem is cultural. In the land of the freeway, what could be more controversial than charging people to drive?

Fortunately, the Los Angeles County Metropolitan Transportation Authority (LA Metro), is undertaking a traffic reduction study to examine how we might package together a combination of street improvements and congestion pricing for Los Angeles County.

Fun fact: we call them freeways because they’re supposed to be free flowing. The name has nothing to do with the cost, but rather with the operational intent. An intent we collectively have the power to fulfill.

LA Metro’s study is aiming to build support for a pilot program that could test the ideas above. Some lucky area—one with terrible traffic—will be a proving ground for whether they improve the health, safety, environment, and access for everyone equitably. If it works, perhaps more parts of L.A. will demand these changes, too. If it doesn’t, well, we can always go back to our traffic-choked ways.

Moving forward with congestion pricing, exclusive bus and bike lanes, better bus service, and other improvements will take greater political courage than we have seen in recent years. These changes inherently disrupt and expose the existing inequities in our society by improving services for non-drivers, who tend to be low-income and people of color, and asking drivers to pay their fair share. But isn’t this what most of our elected officials claim to stand for?

We already have the solutions to L.A.’s longstanding traffic, pollution and mobility inequities. Now we just have to decide whether to choose them.