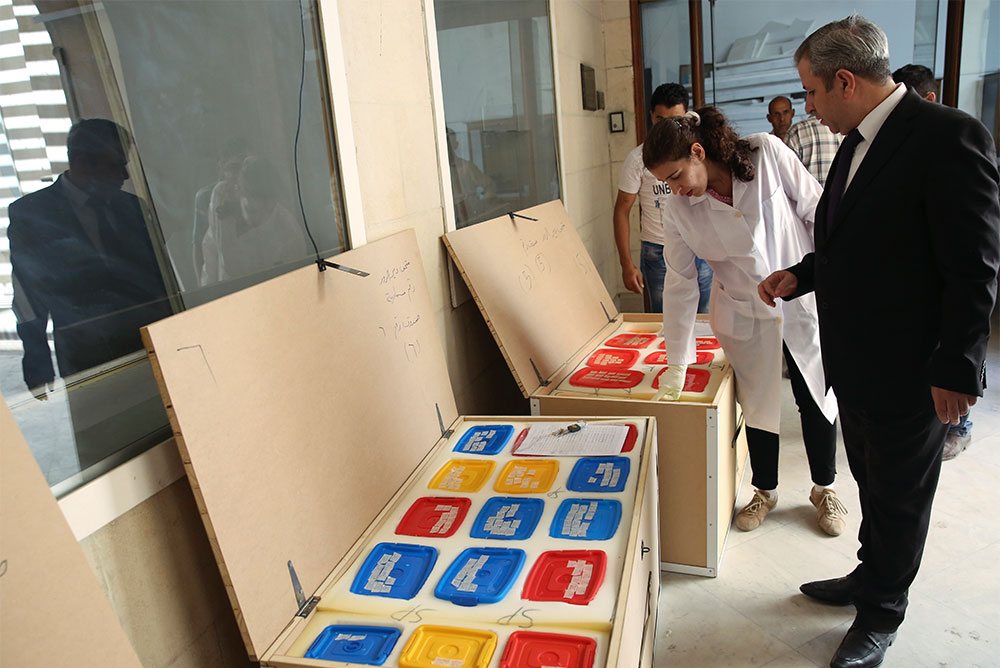 Professor Maamoun Abdulkarim, then head of the Museums and Antiquities Department, observed Syrian technicians and conservators working on preserving Syrian artifacts delivered from various parts of Syria to Damascus in 2015. Courtesy of Associated Press.


Protecting cultural heritage during crises and wars is a big challenge, especially if conflict erupts suddenly and consumes a country with violence.

As head of the Directorate-General of Antiquities and Museums in Syria during the worst stage of history for my country, I contended with this challenge firsthand. That’s why I know, in this moment, it is essential for Ukraine to choose the right strategy to protect its threatened cultural legacy. Not everything can be saved in such circumstances, but we have a scientific, moral, and humanitarian responsibility to provide all forms of support to help guarantee the protection of our world heritage.

My leadership tenure was the most difficult period of my life. For five years, from 2012 to 2017, I took on the work of overseeing cultural heritage preservation during the war. But these years were also the most important ones of my life. I gladly served as a volunteer, without a monthly salary or any compensation, for the honor of helping preserve Syrian cultural heritage, rescuing artifacts that serve as markers of identity and collective memory for Syrian people.

When I was appointed director in August of 2012, it was clear that Syria was heading toward tragedy. As violence escalated throughout the country that summer, the Syrian prime minister fled Syria and the minister of defense and four generals in the army were killed in a bombing.

Proceeding from the idea that the protection of cultural heritage unites us all, my colleagues and I developed a plan outlining how to save what could be saved, especially from the 34 museums distributed throughout Syria. This was in line with our charter—the Directorate-General of Antiquities and Museums was founded in 1946 as a government-owned agency tasked with the protection, promotion, and excavation activities in all sites of national heritage in Syria. Because we are not affiliated with political parties, we could put ideology aside to come together around this shared vision.

Our cohort of scholars and artists were determined not to repeat the tragic experiences of other countries such as Iraq, when the national museum in Baghdad was looted in 2003. To this end, we set out to work with cadres in all provinces, seeking cooperation with members of the local communities in areas where institutions were absent, to mitigate damage to archaeological sites.

By the end of the summer of 2012, when we concluded the general situation in the country was heading toward destruction, we made the decision to empty all museums of antiquities and transfer them to safe places, such as underground warehouses equipped with surveillance cameras and resistant to explosions, fire, and theft. We transferred important historical documents, especially from the Ottoman period, to similarly fortified spaces, which were also equipped with devices that helped provide the appropriate humidity and heat to protect them from damage. We reinforced the museums themselves with strong iron doors, alarms, and surveillance cameras.

When violence escalated and spread throughout the country in 2015, we realized we needed a new strategy. By then, the security situation in Damascus had improved somewhat, so we resolved to transfer the archaeological holdings from Syrian museums throughout the country to the capital. Still, the decision carried its own risks due to threats on the roads between Damascus and other cities.

It is with great pride that I look back on the priceless heritage we safeguarded, but I do not wish that specialists in archeology and cultural heritage preservation in countries experiencing wars and violent conflicts should ever find themselves in such a position.

Take Palmyra. On the evening of May 21, 2015, when the city fell to ISIS terrorists, we had no choice but to act fast. Palmyra is one of the most important world heritage cities due to its historical importance, millennia-old archaeological sites, and the diversity of its ancient buildings, many of which are exceptionally well preserved. So, in coordination with the Syrian military police, colleagues at the National Museum of Palmyra transported three trucks full of hundreds of statues and artifacts across the desert in the dead of night.

The mission ended up becoming one of our most successful operations in violent conditions. Once Palmyra was liberated in March 2016, we weren’t taking any more chances: we began moving the remaining holdings we couldn’t evacuate during the first mission to Damascus. After two months of hard work, with the participation of about 60 employees from the National Museum in Palmyra, we succeeded in emptying the museum—rescuing hundreds of ancient statues that represent Palmyra art as well as the huge statue of the Lion of Al-Lat (Athena), which weighs about 15 tons—before ISIS occupied the city for the second time, in December 2016.

We followed this strategy in the rest of Syria’s museums during the same period and under the same difficult circumstances. Whether it was rescuing the Deir ez-Zor Museum’s clay tablets, the Aleppo Museum’s precious statues and jewelry, or the Homs Museum’s treasures from the Qatana site, which dates back to the second millennium B.C.E., we were always careful to choose the most important artifacts that could be transported, and to document and photograph them before and after carrying out each mission.

Since the spread of armed groups throughout Syria threatened the roads, one of the most important precautions we took before each transport was to ensure our routes were safe. When we could not securely remove the artifacts by ground, we were forced to get creative. In Raqqa, for instance, which fell under the occupation of ISIS and turned into their capital, we hid a large part of the Raqqa Museum’s holdings in one of the rooms on the second floor of the museum that we secretly converted into a warehouse. By getting rid of the room’s door and building a wall in its place, we were able to keep around 1,097 artifacts hidden during the three years of ISIS rule, despite the destruction the museum building faced.

Following this strategy, we were able to rescue the vast majority of antiquities in Syrian museums. It is with great pride that I look back on the priceless heritage we safeguarded, but I do not wish that specialists in archeology and cultural heritage preservation in countries experiencing wars and violent conflicts should ever find themselves in such a position. Except for some loyal friends from international cultural institutions, who helped us in Syria during those difficult years we lived, we were on our own.

That’s why we need cooperation between all specialists everywhere to help countries that suffer from crises and wars save their cultural heritage from vandalism and theft. Such work does not need to wait for strife to get started. In 2019, for example, I was an expert on the UNESCO team that developed an emergency plan for the National Museum of Sudan in Khartoum and the World Heritage Site in Sudan. It was an opportunity to convey the Syrian experience to my international colleagues and to make plans during peace rather than wait for conflict to break out first.

But that’s not enough. We must continue to push for a world where protecting cultural heritage falls outside of political disputes when they do occur. As we’ve seen time and again, world treasures need to be kept out of wars and conflicts between different countries, so that when they do occur in a particular country or between two countries, everyone respects the international conventions that provide for the protection of cultural heritage.