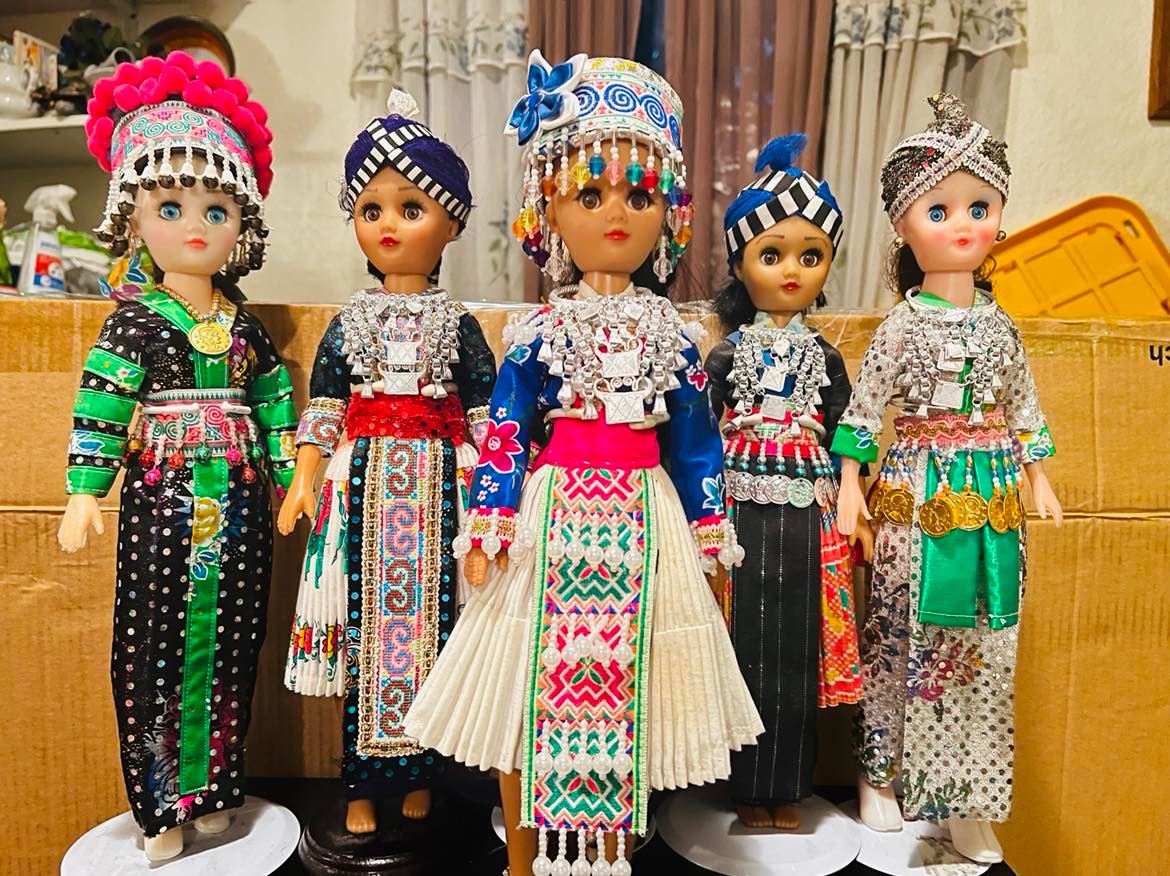 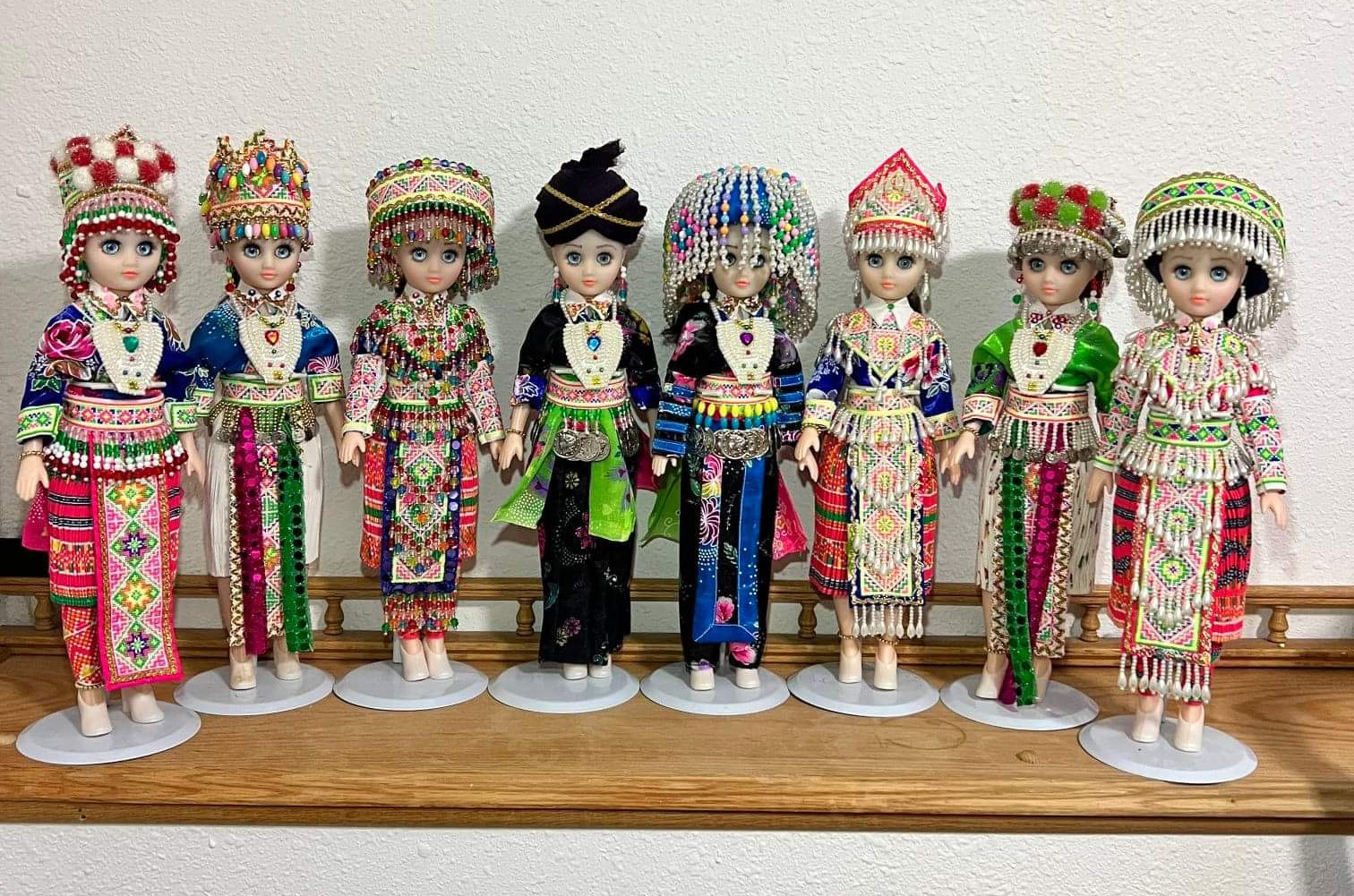 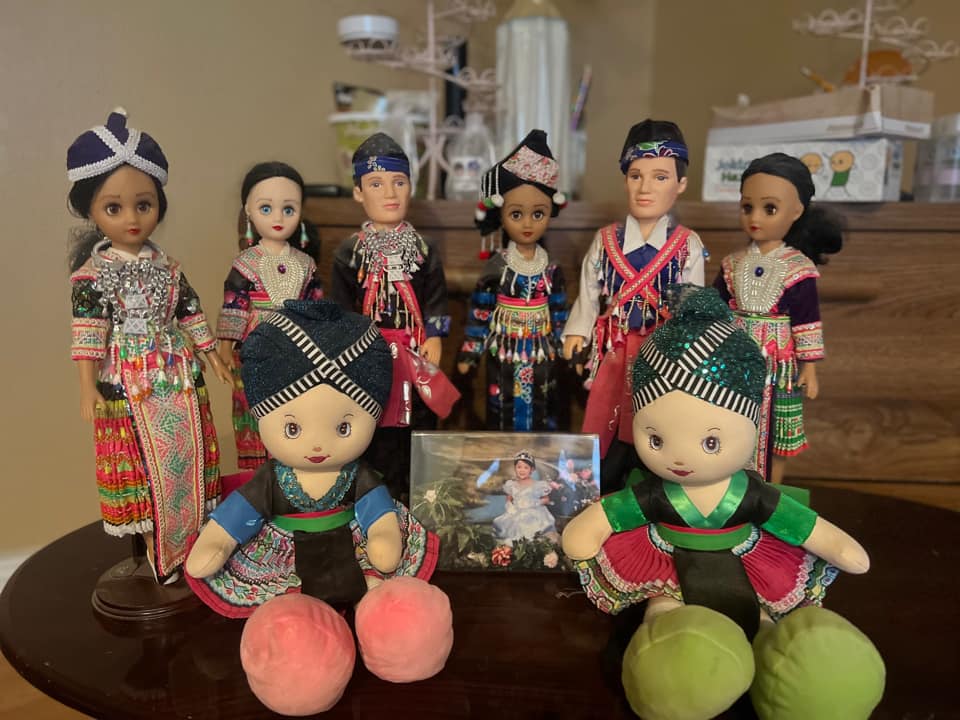 Dolls made by Kate Vue (with some help from an aunt) for her daughter in the early 2000s. Courtesy of Kate Vue (no relation to John Vue). 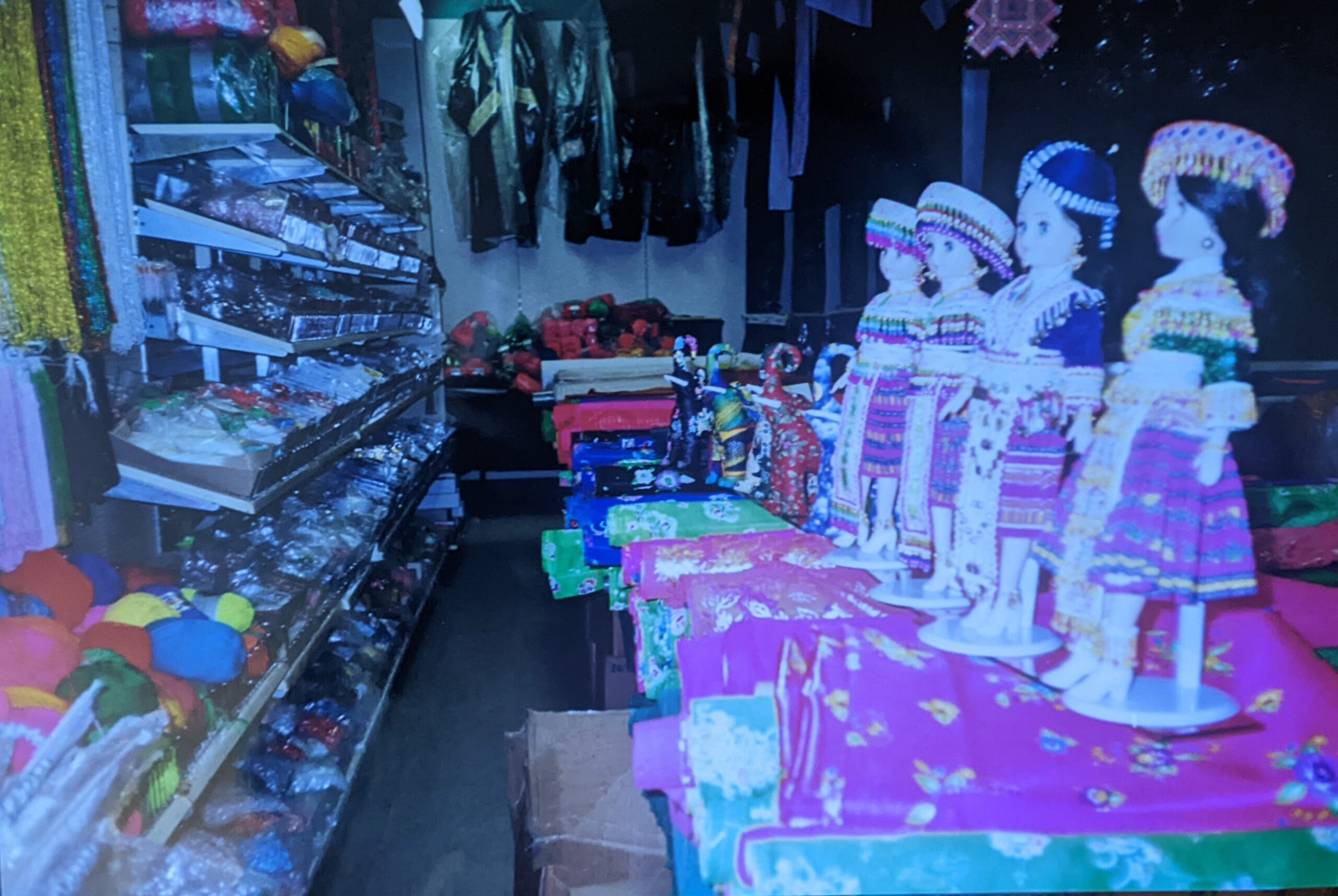 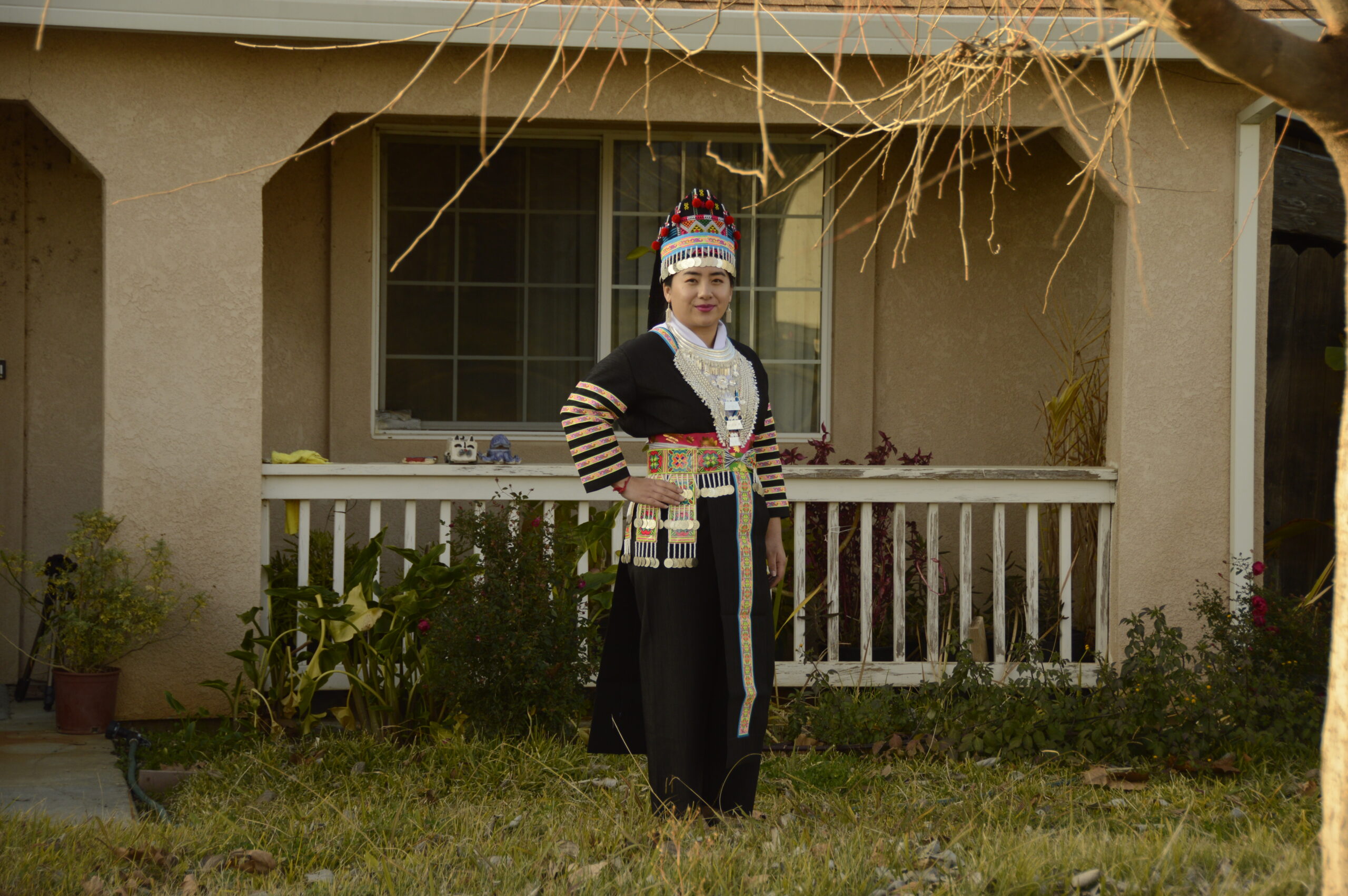 The author dressed in her Hmong Txaij Npab traditional outfit posing outside of her family home in 2020, six months before it was destroyed by a fire. Courtesy of author. 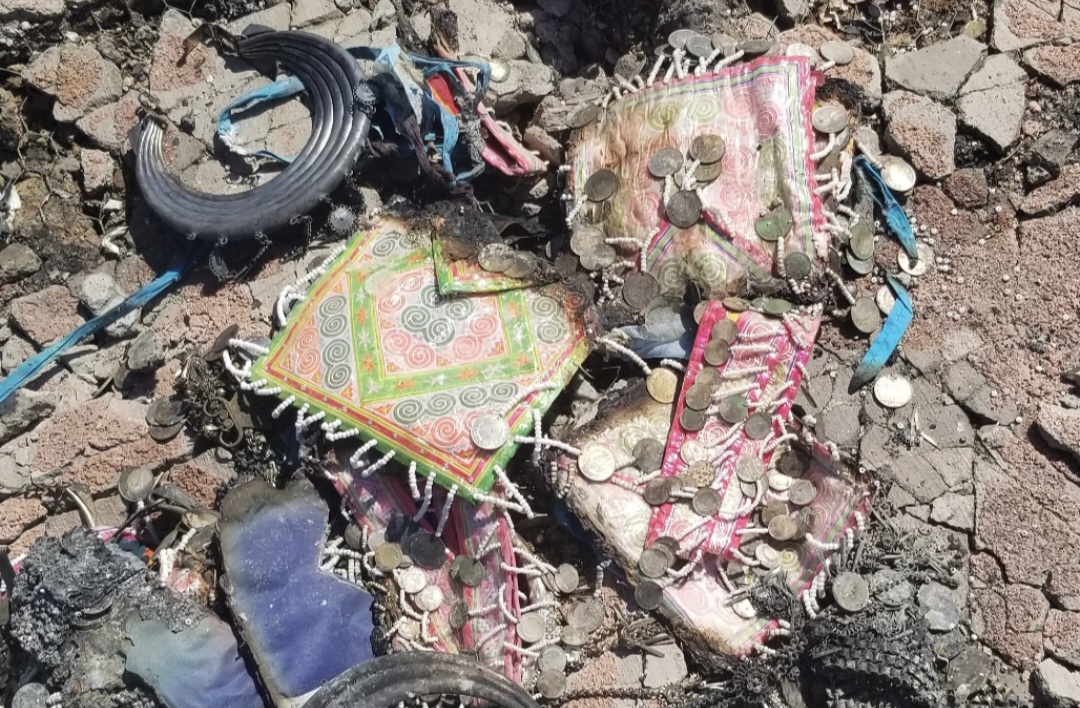 A selection of items destroyed in the June fire. The xauv (silver necklace) and hnab nyiaj (money belt) were typically added to traditional Hmong outfits. Courtesy of author.

The dolls were a seemingly trivial loss in the larger scheme of what went up in smoke when a fire burned through my neighborhood in the summer of 2020.

My family was fortunate to have evacuated in time, but only just so. Except for the few items we carried away with us in the van—in the trunk, under our feet, in our hands—the flames took everything in our home. I mourned the loss of our cultural items and traditional garments—like the suitcase of clothes my pog (father’s mother) received more than half a century ago from her mother.

But I became fixated on the dolls; my mother had created roughly a dozen of them in the early 2000s, using fabric and beads that were left over after she made traditional Hmong outfits for my siblings and me. They lived on the top shelf of her closet, where she kept them for us, tucked away, and protected from dust with clear plastic wrap. Occasionally, she displayed them in the living room but they were not meant to be played with; they were for decor, to be admired for their beauty and embroidery. 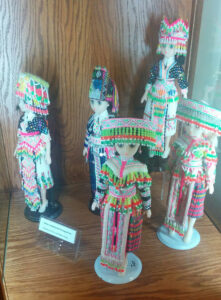 Hmong dolls created by the author’s mother, Se Lor, in the early 2000s. Photo by author.

Hmong dolls are a rare sight nowadays in the community. As they vanish from homes and storefronts, I worry the story behind them will vanish too. Amid my people’s invisibility in history—fraught with war, persecution, and displacement—women’s contributions to Hmong culture, especially, can be overlooked.

For many years I, like so many, long dismissed these dolls as just that: dolls. But their loss, compounded by the loss of my own traditional clothes, spurred something inside of me. I decided to embark on a search to recover the history of how these dolls came to exist—to ensure that though my family’s were gone, their story would not turn into a blip in our collective memory.

I began my inquiry with my mother, asking her if she remembered why she first decided to make her own versions. She recalled booths selling similar dolls at a local Hmong New Year celebration and soon also saw them on display at a relative’s house.

“I saw these beautiful dolls and liked them, so I just started making them too,” she told me.

Her nonchalance didn’t dissuade me; I knew there had to be more to the story.

For centuries, my people passed down traditions and knowledge orally; our shared stories and experiences created our sense of identity and history when we lacked a formal written alphabet. When I started searching, I knew I would find few answers in books or articles, so I sought information via social media, posting questions like, “When did your mothers or you make these dolls?” and “Around what year did you see these dolls?”

Before I began my investigation, I had always assumed doll-making was part of a traditional mother–daughter rite of passage, similar to learning paj ntaub (“flower cloth” or Hmong embroidery), but that was simply because I had only ever witnessed my mother making dolls. As I spoke to more people, I learned they had a more complex history.

The dolls gave me something the fire couldn’t take away: a reminder of how, amid despair and loss, our history and traditions can survive through the act of remembering.

One community member suggested that people started making the dolls in the ’80s and ’90s—when the first and second waves of Hmong refugees entered the United States—to generate income. She recalled making and selling the dolls with her mother at the church that had sponsored their family in Wisconsin. Their dolls’ prices varied depending on the size of the doll and the type of outfit, usually ranging between $40 and $150, but sometimes more. Female dolls were more popular, but male dolls were made, too.

But for many, the work wasn’t done for strictly financial reasons. One person, who came across the dolls in her family’s store in Merced, California, noted that the makers were typically mothers. She observed that like my mom, these mothers would use leftover fabric from the traditional clothes they’d made for their children to make the dolls. For them, dollmaking was a hobby. Another woman shared that her mother dressed dolls in Hmong clothes because her own daughters refused to wear them—an anecdote that would likely resonate with my own mother because my sisters and I had had our fair share of complaints about dressing up for Hmong New Year celebrations. For years, I remember thinking how it always felt like a chore to put on all the pieces and make the outfit look symmetrical and perfect; a blouse and jeans were so much easier to put on.

Cultural preservation was another motivation that emerged behind the creation of the dolls. One mother, inspired by her neighbor, made about 50 of these dolls in the mid ’90s—two of each from different groups of Hmong—to capture traditional attire in a time when Hmong had so little representation in the United States. Her daughter told me her mother gave only a few away (similar to how my mother gifted two—one to an aunt and one to a Hmong cultural center) but she saved most of the dolls as keepsakes. They were too precious to sell after all the time and effort spent on making them.

To finish one doll, it could take several weeks, one person explained, though this ran counter to what my mother had said—that if you were dedicated, you could complete a doll in just a few days. I wondered if my mom was exaggerating, but I had no experience with sewing to venture a guess; by the time I was old enough to start learning, she didn’t have time to teach me as she did my older sisters, and I had become too busy with schoolwork to devote time to the craft. 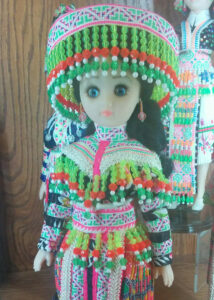 Close up of the three striped patterns on the sleeves of the author’s doll, representative of the traditional Hmoob Txaij Npab style. Photo by author.

I presented my mother with a photo of a doll that she had once given to me. “Even sewing these tiny parts was quick and easy?” I prompted, referring to the three striped patterns on the sleeves, which was representative of our Hmoob Txaij Npab (“Striped Arms Hmong”) traditional style.

My mother seemed taken aback. “I can’t recall,” she told me. “It feels remarkable now that I was able to make these.”

One of the questions I’d hoped to answer in my search was whether the dolls were invented in the United States or if they dated back further, like the story cloths that originated from the refugee camps in Thailand and were sold to foreigners to generate income. The Central Valley region of California seemed to have been a hub of production, but the dolls were also found in Northern California where my family lived, as well as other places with large Hmong populations, like Minnesota and Wisconsin. Yet there were those who had never seen the dolls before, which also made sense to me; during the dolls’ heyday, social media didn’t yet exist. You would have only learned about the dolls by coming across them at someone’s house, a Hmong market, or at the New Year.

Now that these dolls are scarcely, if ever, seen outside a home, I assume the doll makers of yesteryear don’t have time or are not able to make them anymore (I think of my mother, whose hands are no longer as nimble). I suspect, also, that the dolls are not as needed in the way they were before—there are less laborious ways of preserving and reproducing culture now.  And when it comes to income, other sources of work have become more accessible; making dolls is no longer a financial necessity. To make them now, you need passion and devotion to the craft itself.

I don’t expect I’ll ever never find a single place or person of origin behind the dolls, but it is enough for now that my search has unearthed a richer history than I once thought.

My mother, fittingly, was the source of that realization. To my delight, our conversations unlocked a childhood memory from when she lived in Laos, of girls a handful of years older than her playing with dolls cobbled together from scrapped fabric, bamboos, and sticks. They were not adorned with beads and complex patterns, but they wore traditional black clothes, often tied together with a bright-colored belt—seemingly early iterations of the dolls I’d come to know. When my mother saw the dolls at the New Year all those years ago, she remembered the dolls of Laos.

Even after her mother, my niam tais, couldn’t corroborate whether those makeshift dolls existed or not, my mother insisted: “It was such a distinct memory.”

Investigating the dolls led me to uncover intertwined narratives that I had not considered before: my people’s plight and diaspora, the labor and creativity of Hmong women, the preservation of a culture, and the love for dolls and make-believe.

And the dolls gave me something the fire couldn’t take away: a reminder of how, amid despair and loss, our history and traditions can survive through the act of remembering.