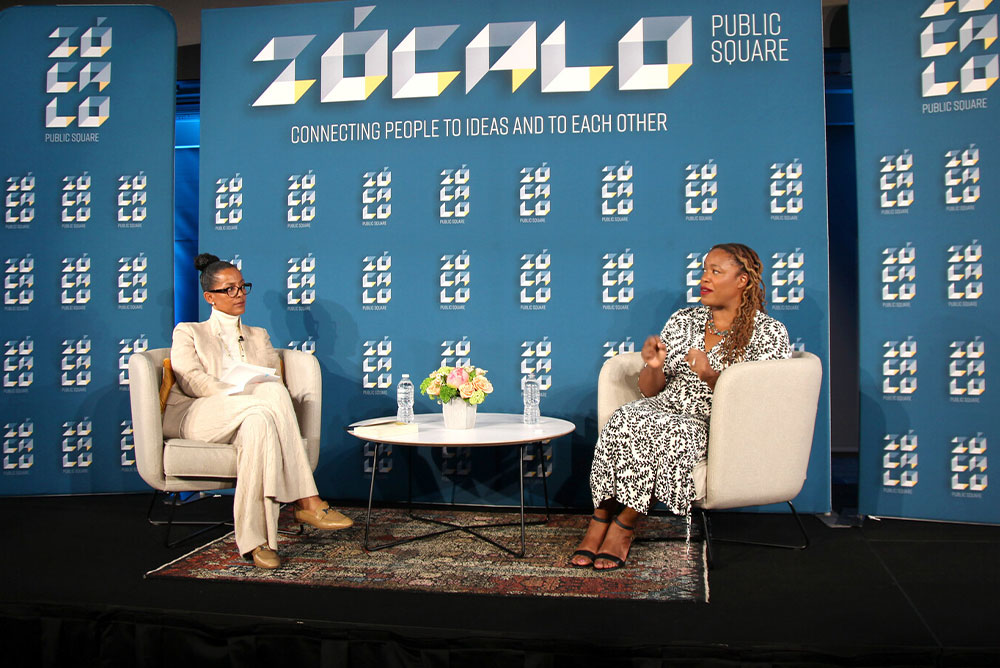 President and CEO of LA84 Foundation Renata Simril (left) and Winner of the 2022 Zócalo Book Prize Heather McGhee (right) dig into the themes of The Sum of Us on the stage of ASU California Center in downtown L.A. Courtesy of Aaron Salcido.

The 2022 Zócalo Public Square Book Prize event’s return to in-person programming for the first time in three years—and the hopeful chord struck by the winning author—arrived at the ASU California Center in downtown L.A. at a necessary moment.

“This book stood out for its compassion and optimism,” said Disney as he introduced The Sum of Us: What Racism Costs Everyone and How We Can Prosper Together and its author, Heather McGhee. The economist and social policy scholar, said Disney, recognizes that racism’s threat to community and cohesion “is in all of us, it rises from us”—and “so does the solution.”

McGhee echoed that optimism in thanking Disney and Zócalo for the $10,000 prize, which honors the year’s best nonfiction book on community and human connectedness “at a time when rancor and division seems like the usual spirit of the day.” And as she launched into a brief talk about her exploration of why Americans struggle for solidarity, she returned again and again to the hope she finds in that story.

McGhee finished writing The Sum of Us at a promising moment: shortly after the elections of November 2020, “when we were going to be able to put right what was broken.” By the time the book was published just a few months later, the January 6 insurrection—guided by a fear of a multi-racial America—had muted any celebrations. It felt, said McGhee, like the “zero-sum idea” at the heart of her book—“that there’s a fixed pie of well-being, and that progress for one group must come at the expense of others … [had] nearly cost us a peaceful transfer of power.”

As a result, many of the book’s readers have focused on what McGhee gets right about America’s “zero-sum game,” and in particular, the book’s central metaphor: public swimming pools. In the 1950s and 1960s, cities and towns across America elected to drain their public swimming pools rather than integrate them. White and Black Americans alike—especially those who couldn’t afford to go to a private pool—all suffered as a result.

This zero-sum thinking, McGhee continued, reared its ugly head once again just two weeks ago, this time in the form of the deaths of 10 people in a Buffalo grocery store, killed in a mass shooting by a gunman who was inspired by the “Great Replacement” theory.

The zero-sum mindset is a recurring story in American history, continued McGhee. “It is our duty and our obligation to keep asking: Who is telling us these stories?” she said. “Who is selling the idea of the zero sum? Who is telling us that we should destroy public goods rather than share them? And how are they profiting from selling those ideas?” This is where she finds hope in her work—that we can hold the “narrow, self-interested elite” accountable for perpetuating this idea, and push back with a new, louder story of American solidarity across race and origin.

McGhee tells that story in The Sum of Us and an upcoming podcast adaptation, highlighting multiracial coalitions that have succeeded in creating political, economic, and social change in their communities that benefit people of all backgrounds. These include the Fight for $15 movement to increase the minimum wage; a renaissance in the former mill town of Lewiston, Maine; and the blocking of a Chevron refinery in Richmond, California. “In every corner of this country, ordinary people are doing extraordinary things for and with one another. It’s those stories, those examples, that we have to lift up,” she said. “The human heart has the power to change the course of history when it makes a simple agreement with another human heart.”

LA84 Foundation president and CEO Renata Simril joined McGhee on stage to continue the conversation with an interview and audience Q&A that tackled everything from how to hold corporations accountable for their role in the zero-sum game to L.A. County’s return of Bruce’s Beach in the first-ever instance of the government making reparations by returning property that was unjustly seized to a Black family. 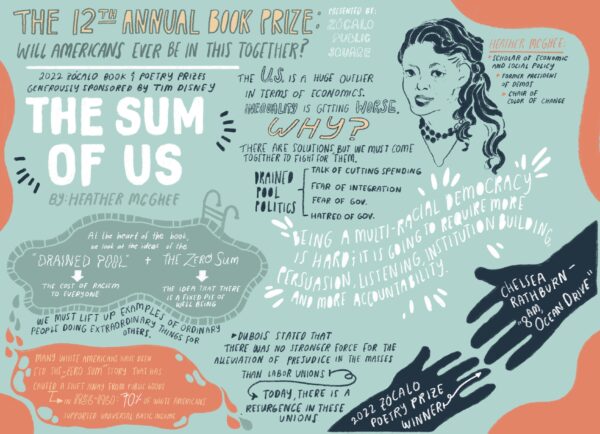 McGhee began the book while serving as president of the think tank Demos, where she was trying “to change the rules” said Simril, only to find that “the tools of economic policy were inadequate.” Why?

McGhee said that as an economist, she saw over and over again how America was “such an outlier among our peer economies on virtually every measure of well-being,” from inequality to education. Our failure to solve these issues was more expensive than the cost of fixing them. She wanted to know: Why can’t we make these smart investments? She found that the answer—to put it bluntly—was because the majority of white people’s ideologies had drifted away from the public good. In doing so, they harmed Black Americans, as well as the middle- and working-class white Americans who make up the nation’s largest group of the uninsured and impoverished. The book was an inquiry into how this happened.

Simril asked whether race was always a subject of inquiry for McGhee.

“No,” McGhee answered quickly, explaining that her initial reluctance to study race was because she wanted to do something different from her mother, whose work has centered on racial inequality. McGhee decided to study class, instead—and found that she “kept tripping over race in the very white world of economic policy think tanks.” Her colleagues could answer “how” questions around America’s defunding of public colleges and tax cuts for billionaires, but they couldn’t figure out the “why.” “We weren’t really looking at the core question of who we are to one another, the core question of race in this highly racialized society,” said McGhee.

That question has become even more politically charged since the book’s release amid a national debate over critical race theory. While visiting Oklahoma last summer, McGhee spoke to a white woman who voiced her anger at not being taught about the Tulsa Massacre in all her years of public education—from kindergarten through graduate school—in the state. “She felt robbed, she felt lied to, she felt furious,” said McGhee, for missing a major piece of history and “an explanatory piece for the disparities that she recognized driving through Tulsa as a child.” Stories and history help us make sense of disparities, McGhee said. “The power of knowing our history is knowing why things are the way they are, and that they can be changed, too.”

History can also provide a powerful challenge to divisions within communities of color, said McGhee in response to an audience question. The same tropes, stories, and justifications come up over and over again—and we need to recognize them for what they are, she said. McGhee offered the idea that Black people are lazy as an example. “It came from the need to justify enslaving and torturing Black people to get them to work,” she said. If we recognize the trope, perhaps we can undo it.

The final audience question asked McGhee to respond to the idea that the more explicit nature of white supremacy since 2016 might create more possibilities for multiracial coalition building.

“It’s all out in the open now: ‘People of color are coming to take your country from you,’” McGhee agreed, musing, “What are the opportunities there?” The opportunities are not new, but the reminder, she said, is important. McGhee said the onus remains on individuals to decide if we’re willing to tolerate racism—and how much we’re willing to fight for our core values, including against those who would sell us a different American story. 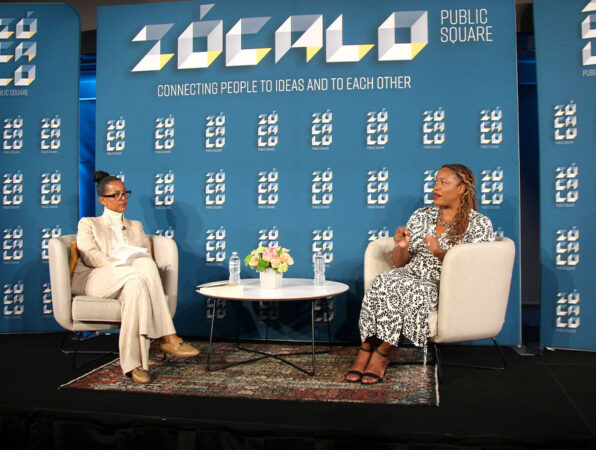 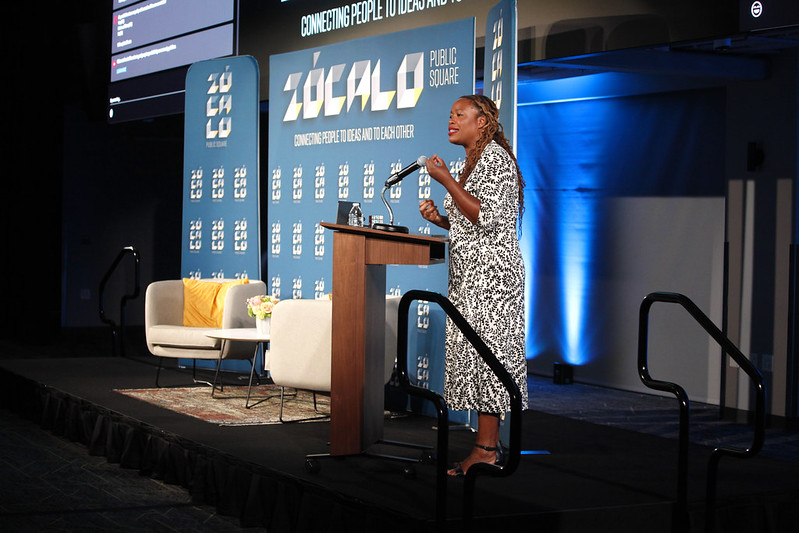 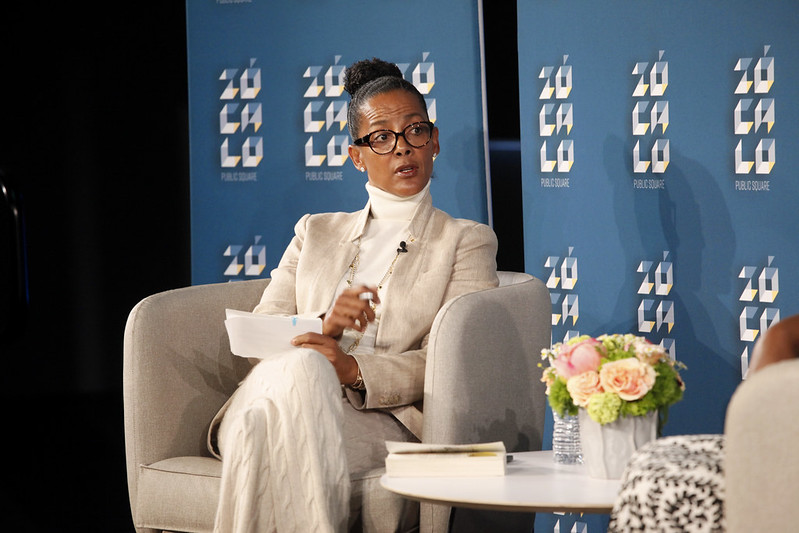 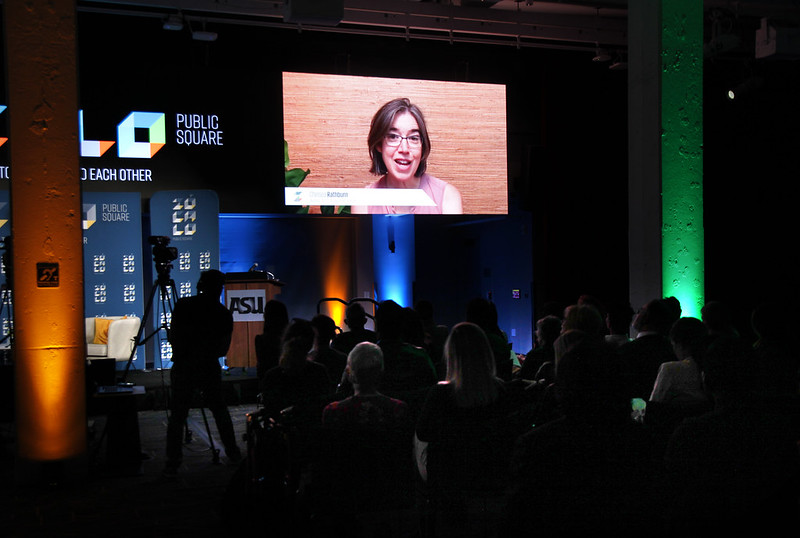 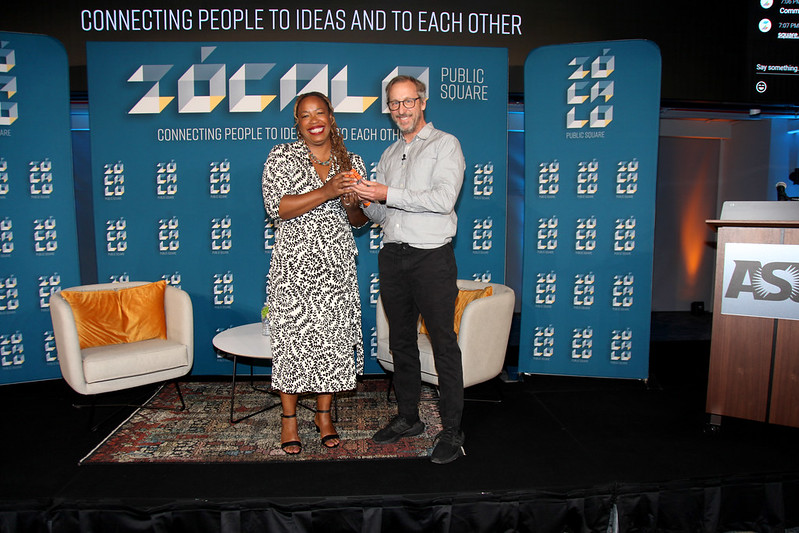 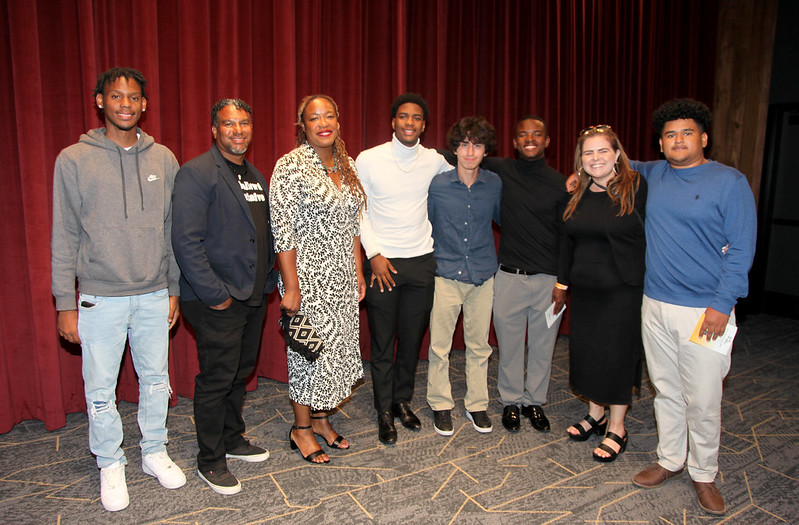 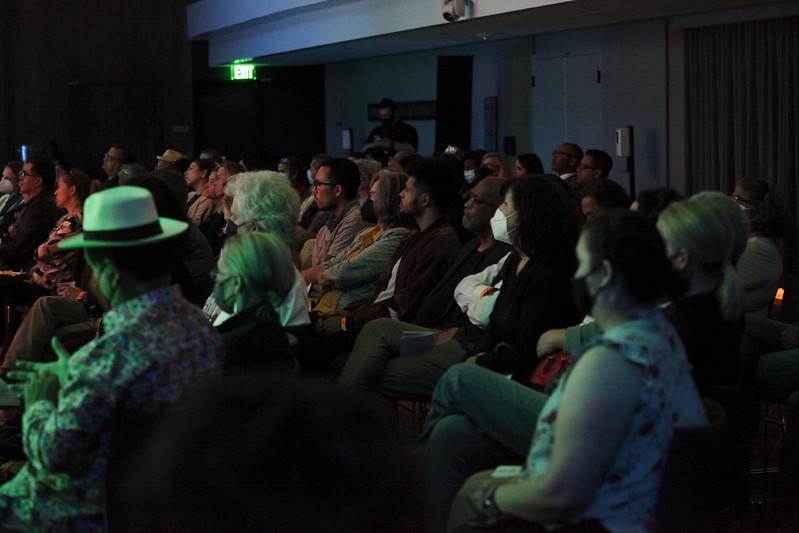 Shot of the full and captivated crowd 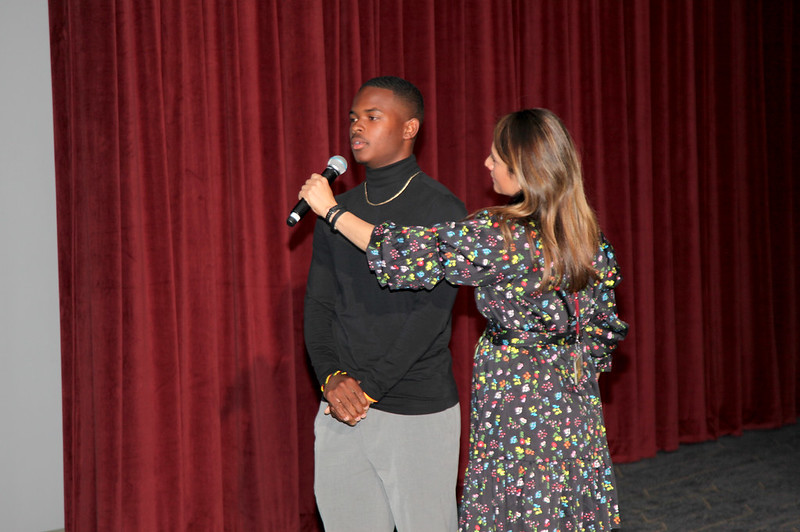 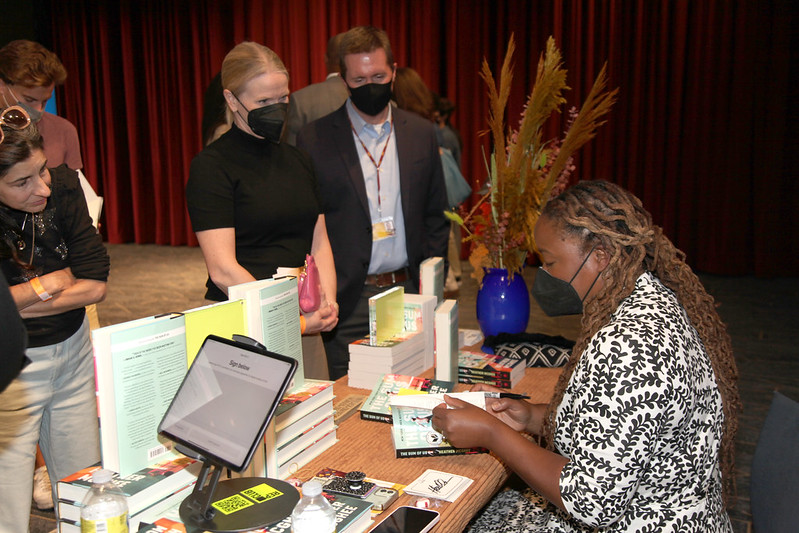