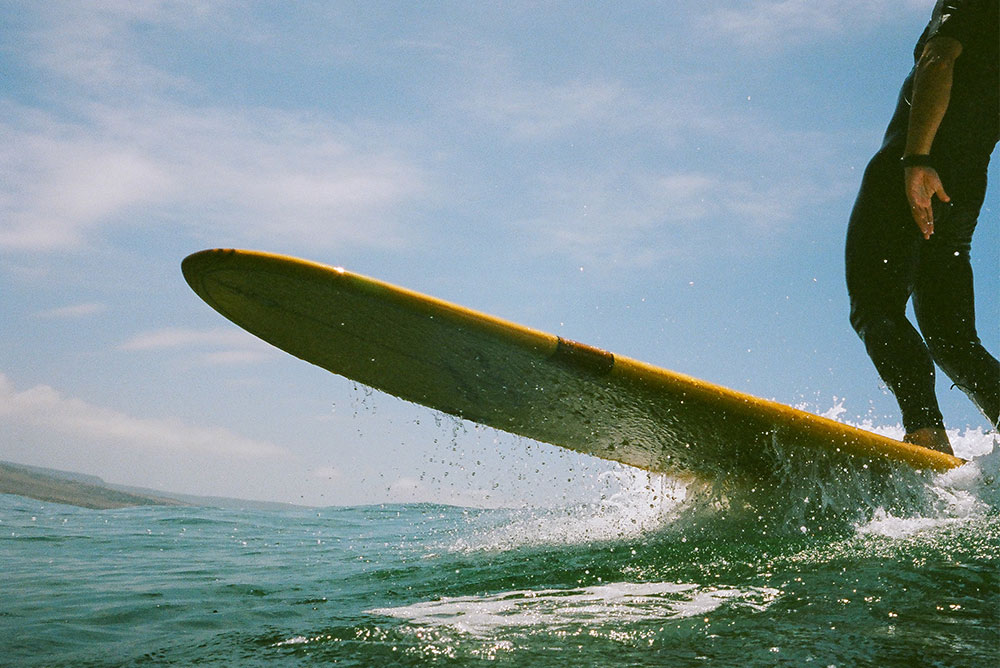 "Surfing has a reputation for embodying all the most annoying and violent aspects of white masculinity," writes Maya Weeks, in contrast to surfing's roots as a Native Hawaiian cultural practice. Courtesy of Matthew Fuentes/Flickr (CC BY-NC-ND 2.0).

In any given session I paddle over whitewash, holding myself up like I’m doing a pushup on the board while I paddle out toward the lineup to keep my momentum going, so I’m not pushed back towards the shore. The whitewater sweeps underneath me, brushes my nose, chills my hands. I paddle to take off—so much paddling, just always paddling—going right and gauge the angle of my rail in relation to the face of the wave. I balance. After the wave peters out and I paddle back out, I park myself in the water next to my board to pee and hope no shark swimming by mistakes my vertical body for a seal. I think about confidence.

I sit on my log in the lineup, waiting, watching the horizon (no glasses, no contacts, just vibes) in between bits of conversation. I say hi to everybody; I’m from a small town. I call my board a log but it’s not, it’s a performance longboard for a man twice my size, a literal dad board for going fast and doing longboard cutbacks. I prefer riding hand-me-downs. It’s another way to be connected with the people I surf with and the water I surf in.

I grew up surfing as a white settler on yak titʸu titʸu yak tiłhini Northern Chumash land on the Central Coast of California. I grew up wearing a hand-me-down wetsuit to ride a dinged green yard sale funshape in the cold water of the future Chumash Heritage National Marine Sanctuary; listening to the Red Hot Chili Peppers; and in the traces of United States military infrastructure. I knew from a young age (and with lots of rage) that Junípero Serra had colonized what is currently called San Luis Obispo with Misión San Luis Obispo de Tolosa, in large part by enslaving Chumash people. I had no idea until recently, however, that the intertwined infrastructures of resource extraction and the United States Navy, which continue Serra’s legacy of colonization and extraction, had fundamentally shaped the built environment and accompanying values of my hometown full of surfers.

Surfing has a reputation for embodying all the most annoying and violent aspects of white masculinity, and for good reason. Contrary to its roots as a kānaka maoli (Native Hawaiian) cultural practice, modern surfing as widely distributed by white men has been a font of rugged masculinity, hyperindividualism, and conquering (especially when it comes to big waves). I’m thinking of white locals in my hometown telling visitors “we grew here, you flew here”; of white men stealing the waves of people they don’t know; of the way professional surf contests as late as the 2000s were set up to give women the worst conditions to surf in as well as far-from-equitable prize money; of white American men leasing private islands to capitalize on as surf resorts; of literal surf Nazis. I’m thinking of how in the early 20th century, the Manhattan Beach, California city council used eminent domain to take the land from the Bruces, a Black family. Of how it took the Bruce family nearly a century to recover their land.

Closer to my home, the economy in Morro Bay has largely revolved around the fossil fuel, military, tourism, and (associated) real estate industries since the early 20th century.

I had no idea until recently, however, that the intertwined infrastructures of resource extraction and the United States Navy, which continue Serra’s legacy of colonization and extraction, had fundamentally shaped the built environment and accompanying values of my hometown full of surfers.

At the Chevron Estero Bay Marine Terminal, crude oil was loaded onto tankers from 1929 until 1999. In 1940, the U.S. Navy “established an amphibious training base” in Morro Bay due to its coastal location and harbor, town boosters Roger Castle and Gary Ream report in Images of America: Morro Bay. “By the end of the war,” Castle and Ream continue, “[the base] would occupy more than 250 acres and provide many improvements to the town.” These improvements included infrastructure in the commercial part of the harbor, the Embarcadero, that enabled the town to boom following the war. (It’s worth noting that there is no mention of yak titʸu titʸu yak tiłhini Northern Chumash history or culture in Castle and Ream’s book.) In the 1960s, the U.S. Navy built Defense Fuel Support Point Estero Bay just east of Highway 1 “to store and transport jet fuel to the Naval Air Station in Lemoore, California.” Its two tanks held roughly 4,350,000 gallons of jet fuel each. It is now a superfund site.

These industries offered high-paying jobs that afforded their employees—mainly white men—the ability to live on the coast. The white men who dominated these industries were, therefore, the same as those who dominated surf lineups. They brought the mentalities of the industries into the lineup with them. With this information, surfing begins to look less like a fun pastime and more an offshoot of a grim regime dependent on toxic chemicals, mass death, and uncheckable greed.

In The White Possessive: Property, Power, and Indigenous Sovereignty, scholar Aileen Moreton-Robinson, a Goenpul woman of the Quandamooka First Nation (Moreton Bay), explains the connection between surf culture and the genocidal policy of the settler state of Australia. She notes that as early as the start of the 20th century, ocean recreation activities (such as surfing) became a tool for white settlers to claim access and control to Indigenous land — practices further developed by policymakers who relegated Indigenous people inland and onto reserves and missions based on the legal fiction of terra nullius. This displacement was not accidental in Australia, nor was it in California.

This policy of genocide was not unique to Australia, but rather a transnational concentration of power in the hands of settler governments — of which the military is just one arm. In Moreton-Robinson’s words, “[i]t takes a great deal of work to maintain Canada, the United States, Hawai’i, New Zealand, and Australia as white possessions. The regulatory mechanisms of these nation-states are extremely busy reaffirming and reproducing this possessiveness through a process of perpetual Indigenous dispossession.”

The performance of masculinity in settler states like Australia and California is tightly linked with upholding colonizers’ whiteness. Whether those who perform them realize it or not, the aggressive behaviors listed above are grasps to maintain a status quo that overwhelmingly favors a white patriarchy that manages how wealth, power, and free time for recreation flow.

Yet this status quo is not set in stone. Surf Equity, a social movement that works for “equity, inclusion, and equal pay” for professional women surfers, organized and finally got women invited to the 2018 Maverick’s Challenge off of Half Moon Bay in California (though the contest, one of the preeminent global big-wave surf contests, didn’t go ahead that year). Practicing surfing as a shared activity across gender, age, and class lines is much more in line with how surfing was traditionally practiced in Hawai’i prior to colonization.

Crucially, since time immemorial, the lands and waters of what is currently called the Central Coast of California have been the home of the yak titʸu titʸu yak tiłhini Northern Chumash Tribe. The proposed Chumash Heritage National Marine Sanctuary will reinstate some Chumash sovereignty over these waters in a protected area that will extend from the Channel Islands National Marine Sanctuary to the Monterey Bay National Marine Sanctuary. Ocean and climate scientist Priya Shukla points out that the sanctuary will not only restore “decision-making power to the original stewards of these natural resources” but also “[elevate] Chumash ‘thrivability’, which values the interconnectedness between the natural marine environment and local human community members.” I can’t wait to surf in it.